Last month John reviewed the Philips HTS8140 soundbar home cinema system and was thoroughly impressed by its sound quality and gorgeous design. Well now, we’re taking a look at its little brother, the HTS6100, which once again features a built-in DVD player and Philips’ proprietary Ambisound technology, which uses precisely angled speaker drivers and steerable sound beams to create virtual surround channels, allowing you to enjoy home cinema and surround sound in even the smallest of rooms.

Philips HTS6100 soundbar not for you? Check out our round up of the best soundbars to buy

The HTS8140 was intended for 42in TVs but the HTS6100 is the first model designed for 37in sets, and its cheaper price means that it lacks some of the HTS8140’s bells and whistles, including Faroudja DCDi video processing and an integrated iPod dock.


Of course the main selling point of a product like this is the design, and Philips’ soundbars are by far the best looking on the market. The HTS6100 is utterly stylish all over, but the most eye-catching feature is the translucent panel on the front of the unit, which slides sexily to the right when you hit Open to reveal the disc drive. The touch screen controls found on the HTS8140 are missing from the front panel, replaced by a row of small silver buttons on top, covering functions like volume, power and source input. 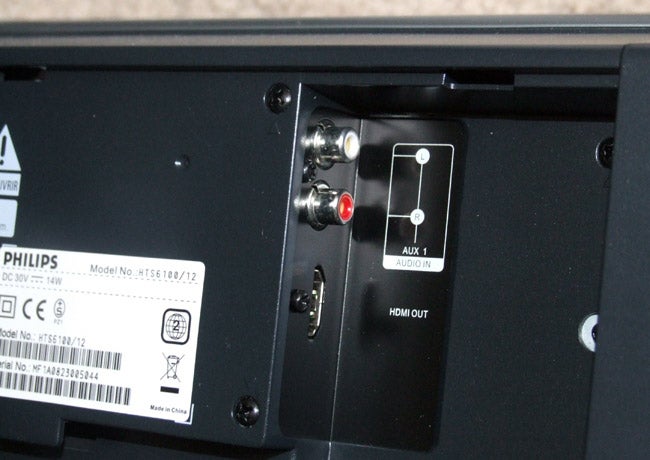 The rest of the unit is styled in a smart black finish with a silver trim running around the edge, which isn’t quite as fetching as the translucent ‘shroud’ found on the HTS8140 but does give it a funky feel that compliments our Toshiba TV beautifully – but its true home is below one of Philips’ latest LCD sets, preferably mounted on the wall.


Also in the box is a subwoofer that’s a lot more stylish than your average bass box. It stands fairly tall, but the appealing black matte finish, elegant curves and silver feet mean you probably won’t want to hide it away – in fact you might be tempted to put a few books and a bowl of pot-pourri on top and use it as a mini coffee table. 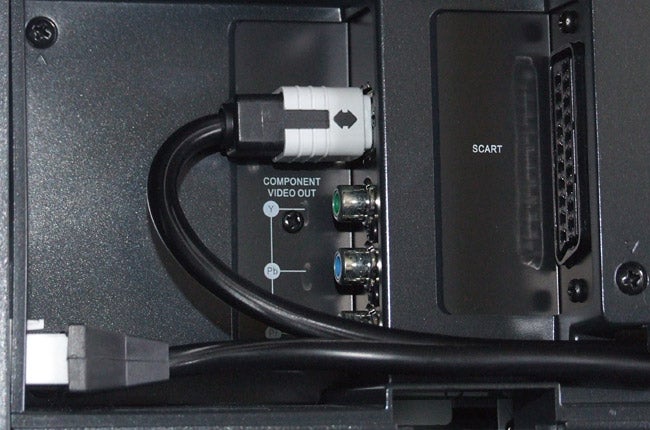 Connections are plentiful, with sockets found on both the soundbar unit and subwoofer. On the soundbar itself you’ll find an HDMI output that can fire 1080p, 1080i, 720p and 576p or 480p pictures to a suitably-equipped TV. It’s backed up by an RGB-capable SCART output and component video output, plus stereo audio input for playing external sources through the system. Meanwhile on the back of the sub you’ll find a coaxial digital audio input and two more sets of stereo audio inputs, plus an FM antenna input for the built-in radio.

Sensibly, Philips has designed the system to be powered using a single mains lead connected to the subwoofer. The soundbar draws its power from the sub and is connected by a single umbilical cord, which means you don’t have a trail of ugly wires hanging down your wall. The process of rigging up the system is self explanatory, while the superbly designed onscreen menus let you tinker with the basics quickly, leaving you with more time to get down to the business of watching movies. 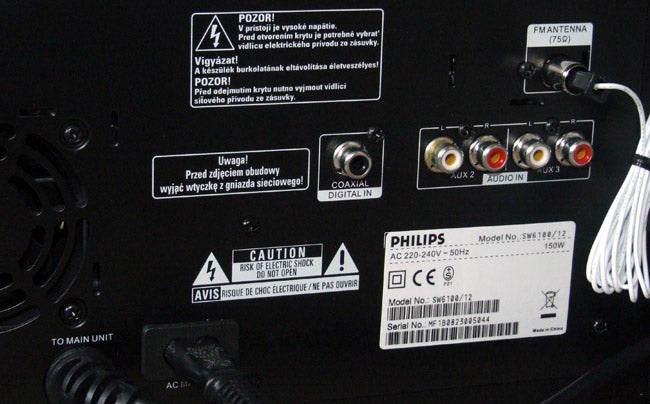 
The unit plays a pleasing range of formats, happily spinning DVD+R/+RW, DVD-R/-RW, Video CD, Super Video CD and CD-R/-RW. Your PC media library is in safe hands too, as the unit supports DivX Ultra (and all the versions before it), MPEG-1, MPEG-2, MP3, WMA and JPEG files, but like the 8140 there’s no support for AAC. These compressed formats can be played from a flash drive connected to the USB input on the left hand side of the soundbar, plus there’s a line input for hooking up an MP3 player.


The system features built-in decoding for Dolby Digital and DTS soundtracks, alongside Dolby Pro Logic II for playing back stereo sources with a bit of virtual surround sparkle. There’s also a smattering of Philips’ own sound tweaks, including treble and bass control, Smart Surround (which chooses Stereo or Multichannel automatically according to the source), DoubleBass and ClearVoice to boost bass and dialogue respectively, plus FullSound to enhance MP3/WMA playback. Add a range of equaliser settings to the equation, with names like Action, Rock and Concert, and you’ve got yourself a pretty flexible audio performer.

To test the HTS6100’s sonic prowess we loaded up ”Speed” on DVD and right from the outset we were impressed by what we heard. The disc’s high-octane DTS soundtrack is reproduced with astonishing clarity and power by the soundbar’s built-in speakers, reproducing the film’s frequent explosions with gut-wrenching force (the first bus bomb is particularly potent) and thankfully you can crank the volume up high without fear of distortion or cabinet rattle.


But by far the most impressive aspect of the HTS6100’s performance is the expansive soundstage generated by Ambisound, which throws surround effects far and wide into the room to provide a genuine sense of space. It cleanly separates the rear channels, accurately placing them either side of the listening position, while speech remains pinned to the front of the room, sounding forthright and true-to-life at all times. These attributes make ”Speed’s” opening lift shaft sequence a real thrill, with the excellent placement of effects like creaking cables and frantic screaming adding to the tension and claustrophobic atmosphere of the scene.

However, it’s worth pointing out that the HTS6100 never comes close to replicating the 360 degree effect of a real 5.1-channel system. At no point did we feel that the effects were coming from behind the listening position, which makes Philips’ claims of ‘truly embracing multi-channel surround sound’ and ‘an immersive 5.1 sound experience’ seem a little wide of the mark. Not that we’re surprised of course, as we’re yet to hear a 2.1 system that sounds as good as a proper 5.1 setup, and as virtual surround goes Philips provides one of the better examples. 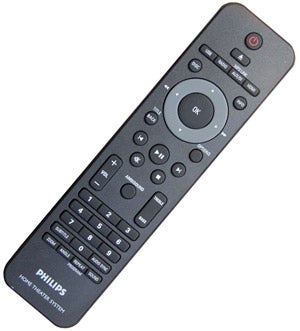 But once you accept the system’s limitations, you’re free to enjoy its other attributes, such as the subwoofer’s rich, visceral bass output that lends heft to Dennis Hopper’s beloved bombs, and the terrific bass/treble balance that never leaves the sound feeling too muddy or too bright. CD playback is hugely enjoyable in stereo mode, bringing a crispness and warmth to a range of musical styles, while MP3 and WMA files played from a USB stick sound clean and detailed – hats off to FullSound. 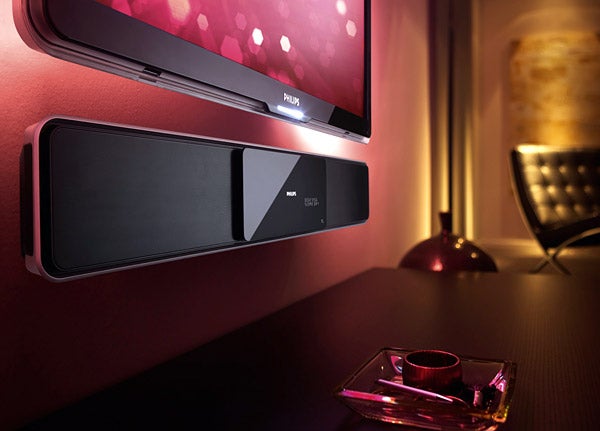 We’re also pleased to say that despite the lack of Faroudja DCDi processing, the HTS6100 does a stand-up job of upscaling SD DVD material to 1080p, reproducing our test movie’s visuals with decent depth, richness and clarity. There’s a pinch of grubby noise visible in the deep blue LA skies and you can discern a few jagged edges here and there, but on the whole the images are very rewarding.


A word of advice – don’t approach the HTS6100, or any of its soundbar stablemates, thinking you’re going to get the same 5.1-channel performance as a proper six-speaker setup, because you’re not. The HTS6100 is a different animal altogether, but if you adjust your expectations accordingly you’re likely to be very impressed by what the HTS6100 has to offer – we certainly were.


Ambisound produces a remarkable wide soundstage, resulting in one of the best virtual surround performances we’ve heard, while the ultra-stylish design, easy installation and cracking picture quality provide further reasons to whip out your wallet. So if you’ve decided that a front surround system is the way to go, then Philips is the best ‘bar’ none. Sorry.