A couple of years ago the boundary between MP3 players and personal media players (PMPs) was clearly defined. Bulky hard disk players from the likes of Archos ruled the roost when it came to watching video on the move. Apple’s iPod players had the audio market sewn up.


Now it seems that every mid-priced player released onto the market is video enabled. Recently, we’ve seen Samsung’s diminutive YP-T9, the iAudio7, iRiver Clix 2 and Sandisk Sansa e280 all sport colour screens and video compatibility. The boundaries are blurring and this is the developing market that Philips’ latest GoGear player is hoping to exploit.


The GoGear comes in 1GB, 2GB and 4GB capacities and, with its extremely reasonably price of £96 for the 4GB player, has Sandisk’s Sansa e260 and iRiver’s Clix 2 firmly in its sights. It’s certainly got a fair few things going for it, not least its large colour screen. At 2.2in it’s considerably bigger than the 1.8in screen on the Sansa and is nearly double the size of the eyeball-straining 1.3in number on the iAudio7. 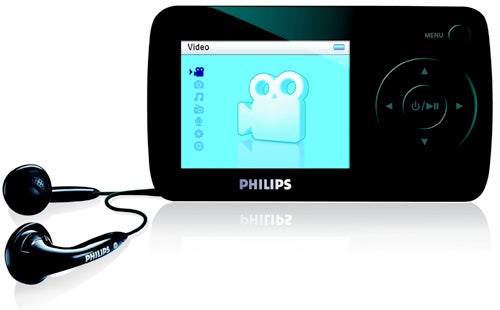 At this size, browsing pictures and watching videos is actually a reasonably pleasant experience. It’s bright and clear and the frame rate isn’t restricted to 15fps as it is on so many other portable music/video players. Samsung’s YP-T9, Sansa’s e260 and the iPod video all play back moving pictures at just 15fps. On the SA6000 series players you can watch video at up to 30fps, depending on the original source material, of course.


Video conversion and transfer is dealt with by Arcsoft’s Media converter, and while this isn’t quite as fully featured as the one you get with Cowon’s iAudio7, it is straightforward to use and will convert everything from WMV to MOV files, with DivX files the only significant omission. I used it to convert a 30 minute VOB file pulled straight from a DVD and this was compressed from 1GB on the PC to a flash-player friendly 149MB WMV 9 file, although it did take a lengthy 30 minutes to do so. It’s also worth noting that watching video on the move does drain the battery quicker than listening to music files or FM radio, reducing playback time from 15 hours to four hours. But this is pretty much par for the course.

Philips has also done a pretty good job of making its SA6000 series look good, though it doesn’t quite make the same clever use of space as the Clix 2, which has the same size screen. The front panel is glossy black, the rear a brushed aluminium-effect and the edges are neatly trimmed in silver. It has a well-built heft to it as well.


The reason for the size – the SA6000 series measures a fairly portly 93.5 x 53.2 x 12.5mm (at the edge) – is its chunky four way d-pad control, which sits to the right of the screen. This works reasonably well and makes the player pretty easy to pick up and use straight away. However, navigating through long lists of tracks, artists and albums is slow and tedious despite the presence of Philips’ so-called SuperScroll technology, which displays the initial letter of the track/artist/album in a box as you go.

Above the d-pad, on the top edge, sits the volume control and, just around the corner is a button for adding tracks to the device’s dynamic playlist – a feature that lets you build up a mix of tracks on the fly. Disappointingly, though, this doesn’t work as it should. Add a file to the end of the playlist as you’re listening to it and it’ll simply ignore that track when you get to the end of the original list. You have to physically refresh the playlist to get it to play the new selection, which is hardly ideal.


Nor is the list of supported audio formats particularly impressive. All you get with this Philips is WMA, WMA DRM and MP3 support – no AAC, Ogg Vorbis or lossless file support – which is a shame because the sound quality of this player is actually extremely good. 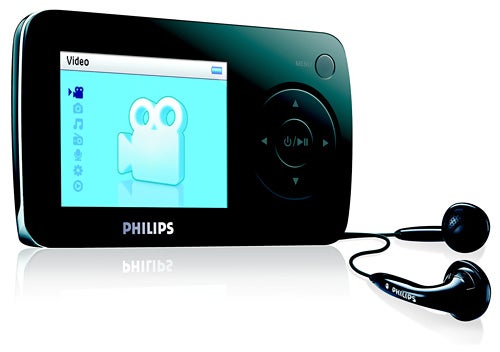 Kicking off the listening tests with the Kings of Convenience’s Simon and Garfunkel-style piano, guitars and vocals really drew out the strengths of the SA6045. It has an extremely clean sound – clearly better than the iAudio7, the iPod nano and shuffle, and a big improvement over the linkout:https://www.trustedreviews.com/mp3/review/2007/06/13/Samsung-YP-T9-mp3-player/p1 Samsung YP-T9}. Even the bundled earbuds are far better than most you get with players at this price.


Moving onto something a bit more bass heavy, reveals a balanced sound that’s not lacking at the low end of the scale. The deep electronic bass on Chicane’s Saltwater is all there – not quite as juicy as it is with Sony’s players, perhaps, but certainly up there with the likes of the iRiver T60, which is high praise indeed. The driving guitars on Biffy Clyro’s Puzzle don’t faze the player either.


As with so many digital media players these days, the conclusion with this Philips is a bit of a mixed one. With such a low price it’s clearly firing directly at the Sandisk Sansa e200 range of players and, to a certain extent it bests them. In particular, the Philips is the better player for watching video on. The frame rate is smoother and the screen is bigger.


In other respects it falls behind. The controls and interface let it down in comparison to the e200’s scroll wheel, audio file format support is weak and there’s no facility for memory expansion either.


In the end it comes down to what you want to do with your media player. For straight out music listening there are better players out there, but if movie playback is a significant consideration then at this price there’s none better than the SA6000 series.