Pocket, flash-based MP3 players have been able to play back video for some time now. And with capacities of 16GB and 32GB beginning to tread on the toes of hard disk players such as Apple’s iPod Classic and Archos’ 605 WiFi, there’s plenty of room on modern devices to store memory-hungry TV shows and movies.


So it’s surprising that, as yet, so few have mastered the business. SanDisk’s Sansa View did a reasonable job – you could play back a good range of file formats, and at a greater resolution than its 320 x 240 screen. Almost every other flash video capable player I’ve ever reviewed, however, like a young child who picks the mushrooms out of his chicken and mushroom pie, is fussy about the type of video plays back. 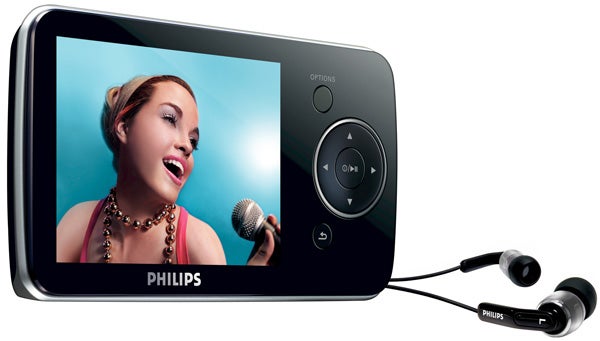 Could Philips’ latest dual-purpose music/video player buck the trend? It’s clearly aimed at people wanting a decent video-watching experience, and there’s certainly plenty of storage space for video – 8GB. The screen is a spacious 2.8in, 320 x 240 resolution one and watching footage on it is a generally comfortable experience, too. It’s not the brightest screen I’ve ever come across, and viewing angles are pretty poor, but it will play back video at a smooth 30fps, and the sheer size of it means that you won’t go cross-eyed watching it for more than ten or 20 minutes at a time.


Playback is implemented quite well, too. The player will automatically bookmark your place in a video file for you when you pause, so you can return to the same position after going off to change some settings, or even listen to some music. This works with multiple video files, too; handy if you make a habit of watching your movies in chunks. It’s slightly disappointing that forward and backwards scanning is limited to 4x speeds, however. 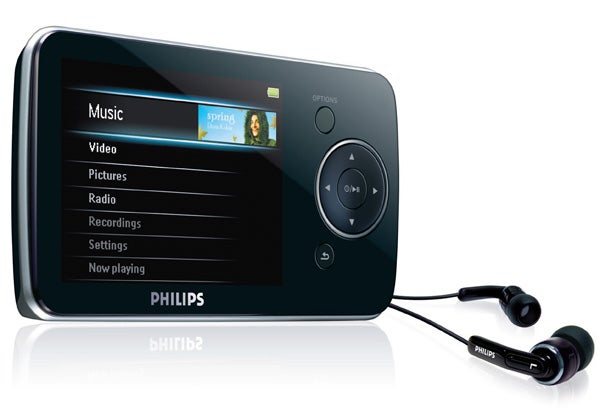 But the video support and compatibility issues remain. Where the Sansa View can play back high resolution files, and thus is more likely to play files in your library without requiring transcoding, the GoGear throws them out of its high chair in a huff. It will play only MP4 .avi and WMV9 files and though it supports frame rates of up to 30fps, it requires these files to be encoded at a bitrate of 640Kbps or 512Kbps or below. In short, you’re still likely to have to laboriously transcode much of your video using the bundled converter software before being able to watch it on the screen of your SA5285/02.


I’m not altogether convinced by the control system either. Despite the fact that the 5285/02 is a large player at 106 x 58 x 10mm, the five-way up/down/left/right/select directional pad to the right of the screen is small and fiddly. Even with my dainty thumbs I found myself constantly pressing the select button by accident when navigating around the device’s menu system. And, while I’m on the subject of menu systems, this has to be one of the more irritating I’ve used. It’s slow to respond to button clicks, unlike with video it doesn’t remember what you played last, so you always have to start browsing your album, artist or track list from the top, and scrolling through long lists of titles is a frustrating experience – it’s either very low, or far too quick.

It’s a shame about the niggles, because elsewhere, it’s not a bad player. It’s nicely designed and put together, with a glossy black front, thin silver trim around the edge and a brushed aluminium-effect black plastic rear panel. Claimed battery life runs to an impressive 30 hours for music and six hours for video. Music file format compatibility is good, with support for not only MP3 and WMA, but also AAC and Audible files (though there’s no support for lossless formats). You get an FM tuner for your money with RDS and 20 presets, plus the facility to record either radio or via an external microphone. You can create playlists on the fly, too.

And sound quality is pretty good. Hooking up my usual test headphones – a pair of Grado SR325s – revealed a sound on the warm side, but not overly so. I started things off with ”Strange Overtones”, the free sample track from David Byrne and Brian Eno’s new album – ”Everything That Happens Will Happen Today”, and was pleasantly surprised. If anything the volume isn’t the loudest, but there’s a decent balance here between the bass line, mids and high notes. It’s nothing particularly outstanding, and not quite as dynamic, detailed and punchy as the iRiver Lplayer, but it is on a par with the Sansa View and iPod nano and that’s nothing to complain about.


Switching to some metal – a touch of Metallica and then some HIM – and pumping the volume right up revealed that the 5285/02 doesn’t go that loud, so it’s possibly not the best choice if you prefer circumaural or supraaural headphones, but with most ear-canal phones or earbuds this shouldn’t prove a problem.

The 5285/02 is also helped by the fact that it comes with a pair of pretty decent headphones in the box. They’re noise isolating phones of the in-ear canal type, and though not quite as good as the pair that comes with Creative’s excellent Zen X-Fi, they are miles, miles better than the those that come with most other MP3 players, with good bass and detail reproduction. There’s even a couple of pairs of alternative ear fittings (large and small) included in the box if the medium ones don’t create a good seal.


Despite its qualities, however, the GoGear SA5285/02, doesn’t quite hit the mark for me. It’s well priced – just £100 for an 8GB player with such a large screen and good bundled headphones is a pretty good deal. But when you can buy a Sansa View with double the capacity, better video compatibility and none of the problems that this device has with its controls and interface, it starts to look like less of a convincing argument.