It’s no secret what product the Philips Fidelio Docking Speaker DS9000/10 is going after. The DS9000 is an iPod speaker dock more than just a little influenced by the Bowers & Wilkins Zeppelin. And while Philips may not have quite the brand cachet of Bowers & Wilkins in the audio world, that doesn’t necessarily preclude the DS9000 from proving itself worthy of your hard-earned monies. 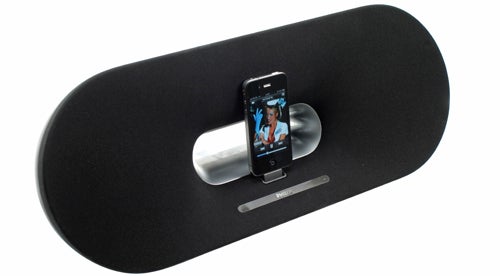 In the DS9000’s favour is its price. While its MSRP is the same as the B&W Zeppelin – £399 – it’s actually available for £360 on Amazon. Assuming that price holds, it’s a decent chunk of change saved. For £40 it’s much easier to see past the different labels on each device and judge them purely on their objective merits – as we should be, really.


The aesthetics are most accurately described as divisive. The design isn’t as universally appealing as the blimp-inspired Zeppelin, but it has a certain something about it nonetheless. There’s a tasteful elegance to the carved wooden back, the polished metal crevasse in the centre and the predictably black cloth mesh covering the front surface.


The wooden rear is made using a process called ‘veneer lamination’ which to those unfamiliar with such techniques, composes multiple layers of lacquered plywood being formed together to create a naturally stiff structure, reducing internal vibration. The shape is not only visually appealing, but also designed to eliminate internal reflection and standing waves. 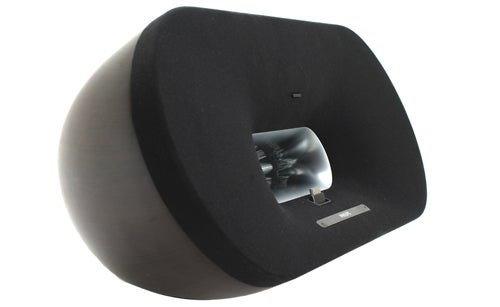 The central gap, too, isn’t just an interesting, design feature; it also reduces interference between the left and right drivers. Oddly enough, the DS9000, like the Zeppelin, looks rather attractive from the rear. The two bass ports, incorporated into the metal centre piece, look rather like jet engine outlets. Or just holes, if your artistic licence has been revoked.


One feature of the Philips DS9000 almost inarguably inspired by the Zeppelin is its iPod dock. Like the Zeppelin, the DS9000’s iPod connection point is spring-loaded, letting it accommodate any iPod or iPhone without the need for the god-forsaken adaptors speaker docks usually come with. Incidentally, this also lets you keep your iPhone or iPod is a case when docking it – our iPhone 4’s bumper certainly proved no hindrance.

Aside from the prominent dock, the DS9000’s connectivity would most kindly be described as minimalist, comprising merely of a kettle lead power input and an aux-in around the system’s rear. Not that we particularly lament the lack of a video-out connection. No member of the editorial team has ever felt particularly inclined to watch video from our iPods blown up on a 42in plasma TV. 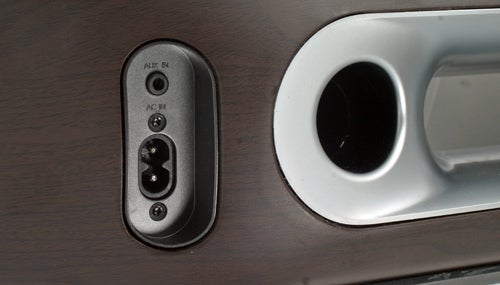 We’re not so sure the Philips logo prominently displayed up front, on the metal strip which serves as the DS9000’s volume control, gives the same air of class as the B&W logo on the Zeppelin. However, the choice of orange LEDs we rather like for some reason.


Firmly in the category of stylish but fundamentally pointless is the proximity sensor that activates these LEDs when your hand is nearby, and turns them off when you move away. Necessary? Goodness, no. Cool? Goodness, yes.


The remote control is a particular highlight. This metal-backed peripheral doesn’t just feel rather pleasant in the hand and feature the usual array of volume up and down, mute, and source switching buttons. No, it also has a ‘menu’ button and a d-pad surrounding an ‘ok’ button which, with a compatible iPod (not iPhones or iPod touches alas) lets you navigate the device from afar. 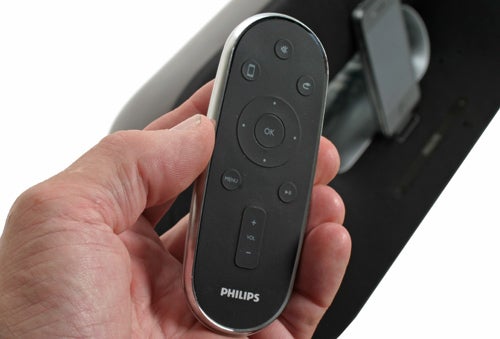 If your iPod touch or iPhone is feeling left out there, then Philips’ Fidelio app might assuage it a little. You will want to install this, if for no other reason than to stop your device nagging you to do so every single time you connect it to the DS9000. It doesn’t offer much, but there’s an alarm clock that will play either sound effects (birds tweeting, waves, church bells… you get the idea) or, alternatively, your choice of music to wake you of a morning.

We’re willing to forgive the all but useless iPhone app available for the Philips Fidelio DS9000 for one simple reason. Where it matters most, its audio quality, Philips’ DS9000 focus is firmly set on raw performance, not gimmicks or flashy effects.


For a start, the DS9000 is smart enough to know that in a high-end audio product, your iPod is best used as little more than a portable hard drive with a snazzy UI. As such the digital files are pulled off any docked device, bypassing its digital-to-analogue conversion, which is instead handled by the DS9000. 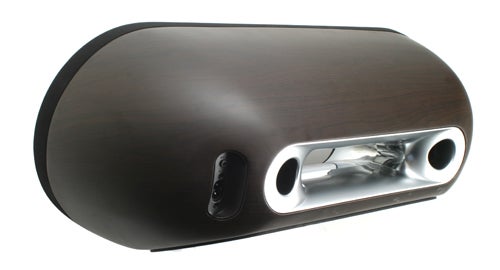 Further, Philips claims that the DS9000 uses audiophile-grade passive crossovers between its dual 25mm tweeters and 100mm mid/bass-drivers and we’re not inclined to disagree. There’s no discernable gap in the frequency response nor is there any distortion, even at volumes loud enough to have the very foundations of your abode shaking.


The DS9000 produces a very balanced, nicely detailed, enveloping sound. Tracks are reproduced faithfully, without the distortion effects or colouration less confident speaker docks so often feel the need to employ to stand out from the crowd. The driver placement is well-thought out, giving a surprisingly wide soundstage and, as previously mentioned, the DS9000 has no problem with filling a room.

In terms of the DS9000’s direct competition, we’re inclined to give the Bowers & Wilkins Zeppelin the edge on outright fidelity; without wanting to sound too wishy washy, the Zeppelin just sounds ‘right’ to our ears. But in all honestly, you’d have to be the surliest of curmudgeons to be disappointed with your purchase, should you decide on a Fidelio DS9000, rather than the Zeppelin. Both sound exceptionally good and both make music from an iPod sound far better than you’d believe possible.


‘Peerless sound quality’ says the Philips DS9000 product page. Not quite; there is no hiding that this is a device with a price and audio quality aimed squarely at the same audience as the Bowers & Wilkins Zeppelin. Is the DS9000 a better speaker dock? No, but it’s a capable alternative. Pick whichever suits your budget and your aesthetic taste best.