The price of upscaling DVD players is falling faster than the Prime Minister’s popularity, which means you can now get near-HD picture quality for a quarter of the price of a high-definition deck. So if you’ve got a big DVD collection and don’t fancy re-mortgaging the house to replace them all on Blu-ray, then a DVD upscaler could be the most cost-effective option.


One of the manufacturers driving this DVD price dive is Philips, and with the DVP5980 (launched last year but still going strong online) it brings 1080p upscaling to a truly mass market price point – which is a real boon considering the growing number of households with Full HD TVs that need a suitable movie source to go with it.


In terms of design, the DVP5980 is one of those effortlessly classy products that Philips seems to churn out in its sleep these days. Its sleek black finish gives it plenty of 21st century chic and at 38mm high it’s one of the slimmest decks you’re likely to come across. Philips has been canny enough to keep the fascia uncluttered, fitting it with just five buttons and a minimal display panel, which draws your eye towards a USB port for your memory devices, card readers and digital cameras.

This USB port makes it possible to play music, video and photo files through your TV and home cinema system without having to load up a disc. Supported formats include DivX (the unit is Ultra certified), MP3, WMA and JPEG, and with the latter the unit will display them in high-definition via the HDMI output. Any of these formats can also be played back from CD or DVD. And in terms of disc formats, the unit will play every type of recordable platter except for DVD-RAM, which means your collection of home-burned discs should be in safe hands.


On the back of the deck is an HDMI output, the conduit for video upscaled to 720p, 1080i or 1080p, plus a set of progressive scan capable component outputs and an RGB-capable SCART. Meanwhile, the coaxial audio socket lets you send Dolby Digital and DTS soundtracks to your AV receiver.


Elsewhere you’ll find a run-of-the-mill feature set, though picture perfectionists might get excited by the Personal mode, which enables you to set your own levels of brightness, contrast, colour and sharpness – but there’s also a couple of presets if you can’t be bothered with all that. On the audio side you’ll find 12 different audio effects that mimic a variety of listening environments and movie genres.


For playback the DVP5980 performs all the tricks you’d expect from a DVD player, such as slow motion, zoom, fast search and a slideshow for JPEGs. In fact, the only real omission from a features perspective is SACD playback but that’s hardly surprising at this price.

Installing the player is a quick process thanks to the logically laid out setup menu that looks attractive and uses large legible text. Unlike some of Philips digital recorders there’s very little delay after pressing a button, giving the deck a pleasing slickness. Furthermore, the remote is very well designed, with a comfortable shape, clever button arrangement and fetching white styling – though the double-duty chapter skip/search keys are as annoying as ever. 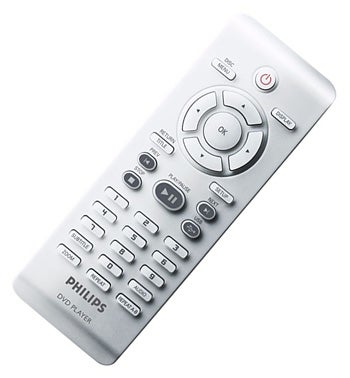 It may not be packed with the sort of high-end electronics that you’d find inside a Denon, Arcam or OPPO, but the picture quality on offer from the HDMI output is still highly impressive. To start with we gave it a tricky test in the form of ”Pan’s Labyrinth” and the Philips copes admirably with the film’s gloomy underground sets and the intricate detail of Del Toro’s sinister-looking characters.


The 1080p upscaling is impressive, giving the picture a natural sharpness boost on a Full HD TV without introducing any unwanted artefacts like jagged edges or pixel noise. This in turn results in clean and, most importantly, cinematic looking pictures that look good on a large or small screen.

Colour reproduction is also impressive, although ”Pan’s Labyrinth” doesn’t give it a particularly dazzling palette to play with. What it does do, however, is show off the deck’s skill and subtlety when it comes to displaying restrained, nuanced hues like Capitán Vidal’s olive tinged skin or the greens and browns of the woods that surround his remote outpost. The lack of MPEG block noise also brings a smile to our face, as does the wide contrast range, which delivers deep blacks and crisp, bright whites.


We’re not just impressed by MPEG-2 video either; it’s also a dab hand with DivX files, which look detailed and fluid (though it does depend on the encoding quality), while HD JPEG playback is a real revelation, making hi-res photos look admirably sharp without the usual jagged edges and blurred detail that occurs when they’re downconverted.


The deck also plays a mean tune. Its 192kHz/24-bit audio DAC makes it no slouch in the audio department, and as a result CD playback from the stereo audio outputs is detailed and distortion-free, provided you play it through a half-decent system, and when channelled via the coaxial audio output, Dolby Digital and DTS movie soundtracks are enthralling.


Overall the DVP5980 is a great all-rounder that boasts solid 1080p picture quality and a healthy range of features for a reasonable price – but as a bonus it’s also beautifully designed and equipped to handle your growing collection of digital media files.