We recently reviewed the Philips DVDR5570H, which turned out to be a very impressive DVD/HDD recorder with one or two caveats. But if its 250GB hard-disk capacity is too big for your budget, then this 160GB version might be a more suitable option.


That 160GB capacity allows you to record up to 180 hours’ worth of TV programmes, as well as up to 150 DivX movies, 4,500 songs or 11,000 photos as part of the recorder’s jukebox functionality. This effectively turns the unit into a multimedia hub, enabling you to keep your content in one place and play it all through your home cinema system.


Apart from the smaller hard-disk capacity, the DVDR5520H boasts all the same features as its 250GB sibling, including an integrated Freeview tuner and support for DVD-RW/-R, DVD+RW/+R and DVD+R (Double Layer) discs, but not DVD-RAM or DVD-R (DL). The best feature you’ll find is the Time Shift Buffer, which uses a portion of the hard disk to continually record what you’re watching (for up to 6 hours), allowing you to pause and rewind live TV or skip back and record a programme retrospectively. Philips is one of the only DVD/HDD recorder manufacturers offering this level of flexibility, which makes a real difference during everyday TV viewing.

Another of the DVDR5520’s main attractions is its stunning design and high build quality. Its black finish, interspersed with flashes of silver and alluring red and blue lights, gives it cutting-edge chic that should compliment your flat panel TV nicely. The central display panel manages to squeeze in the programme name and channel, while a flap on the fascia flips down to reveal the auxiliary inputs (including FireWire, S-video, composite and stereo audio) and a USB port, which is one way of transferring media files onto the hard disk.


Among the rear connections is the now familiar sight of an HDMI output that pipes 1080p, 1080i and 720p video to a suitably-equipped TV, plus component video output, offering the next-best picture quality. Aside from regular sockets like composite, S-video, stereo audio and coaxial digital audio outputs, you’ll also find a coaxial digital audio input that enables you to record 5.1-channel sound from an external source, such as a Sky+ box (though you’ll need an optical to coaxial converter).


Satellite and cable set-top boxes can be connected to the RGB-capable SCART input and, thanks to Guide Plus EPG and supplied G-Link infra-red transmitter, you can make timer recordings from any satellite or cable channel. The deck remotely changes the set-top box to the right channel at the programmed time. It’s also worth noting that if Freeview isn’t available where you live, then you can still pick up analogue broadcasts thanks to the hybrid tuner (with separate RF inputs and outputs for digital and analogue). Therefore this deck makes a great way to plug the gap until switchover is completed in your area.

The features don’t end there. The deck is DivX Ultra certified, which means it plays all versions of the video compression codec along with advanced features like subtitles and alternate audio tracks. MP3, WMA and JPEG are also supported, plus the unit is compatible with Dolby Digital and DTS soundtracks (available in bitstream form from the coaxial digital output). And while we’re discussing format support, it happily spins any recordable DVD you throw at it (except DVD-RAM) plus CD-R, CD-RW and Video CDs.


Having recently waded through the wealth of easy-to-use editing functions on the latest Panasonic recorders, we found Philips’ editing options very limited and not exactly intuitive. The unit is hamstrung by its linear way of working – you can’t, for instance, take clips from any recording and piece them together in a new sequence. You can remove chapters by setting markers as the video plays and then ‘hide’ them so it skips that section when played back, but the results aren’t always accurate.

However, it makes up for this with a brilliant feature called Commercial Block, which will be a godsend to those of you who hate adverts (i.e. everyone). With Smart chaptering activated, the unit automatically inserts chapter points at the beginning and end of every ad break, allowing you to jump past them by pressing the chapter skip key. In action it works magnificently, both with recordings from an external set-top box or the built-in tuner, placing markers in exactly the right place. It even works with programmes on Five, where the logo that flashes up between each advert could have been a problem. On the downside, it has to process the video in standby before the feature is available (a 30-minute recording takes one hour to process) but it’s definitely worth the wait. 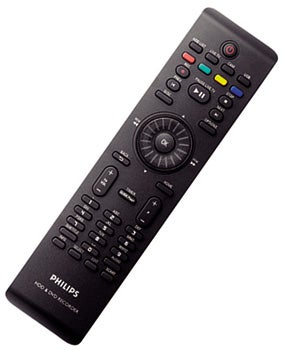 In operation, the DVDR5520H is a touch hesitant and some key features (such as the recording mode and HDMI resolution settings) are buried in submenus rather than being given their own buttons on the remote. But it would have been a lot worse had the remote not been such a work of genius – it’s fitted with a control wheel that makes it easy to search through the Time Shift Buffer and setup menus, plus the other buttons are ideally placed.


For recordings, you can choose from seven recording quality settings – the best is HQ, which is good for 23 hours recording time on the hard-disk, and offers deep, rich colours and a decent amount of detail, demonstrated by the garish colour schemes of daytime TV studios and intricate patterns of the presenters’ tasteless attire. Straight lines are slightly jagged and block noise is visible but the overall results are still impressive.

The next best is the 45-hour SP mode, offering recordings that look a touch softer than HQ but not significantly so – and the benefit is that you can fit two hours on a DVD in this mode compared with HQ’s one hour. The subsequent drop in quality in SPP is again very slight, but the 2.5 hour DVD recording time makes it possible to fit a whole movie on one disc in almost the same quality as HQ or SP.


However, the LP and EP modes (68 and 90 hours on the HDD respectively) require a greater compromise in quality due to the low bitrates, resulting in hazy, block-ridden pictures and jerky motion. The 135-hour SLP and 180-hour SEP modes should only be used in an emergency, as the high levels of MPEG noise and soft edges detract from your overall enjoyment.


It’s also worth noting that the TV signal doesn’t bypass the MPEG encoder, which means live TV is displayed in whichever recording mode is currently selected. This is fine in HQ or SP, but not if you’ve left it in anything lower, and the inconvenient placement of the recording mode settings makes it a pain to change.

There are no such problems with DVD playback though, confirmed by the sharp and dynamic reproduction of ”The Two Towers” disc. The clean 1080p upscaling makes the CG effects and Middle Earth scenery look crisp, while the deep blacks and richly saturated bright colours make the image seem dazzling from the word go.


For recordings, the Dolby Digital-encoded stereo sound quality is excellent, and although it probably hasn’t been built with audiophiles’ tastes in mind, we can’t find much wrong with the DVDR5520H’s music playback either, with both CDs and MP3 files. Solid reproduction of 5.1-channel movie soundtracks via the digital output rounds up a competent sonic performance.


The DVDR5520H can’t quite match the high standards set by the latest recorders from the Panasonic camp, but it comes mighty close. And in some areas, it’s actually better – in particular its live TV flexibility boosted by the terrific Time Shift Buffer, and the clever Commercial Block feature. Plus, unlike the Panasonics you can play DivX straight from the hard disk.


On the downside, the operating system isn’t as slick, it lacks Freeview Playback and a series of minor niggles prevent us from falling completely in love with it – but the positives definitely outweigh the negatives.