If you followed our recent coverage from the Philips/TP Vision TV press event in Amsterdam, you’ll know that the Dutch manufacturer’s 2013 TV range looks very promising indeed. However, as well as the mainstream sets, we also got introduced to a further TV that certainly isn’t in any way ‘normal’. We weren’t allowed to talk about it, though, until now.

The set in question is dubbed, very aptly as it turns out, the DesignLine TV. Amazingly, both the front of the screen and the floorstand the screen sits on are hewn from the same single, seamless sheet of black glass. It’s a bold design statement that yields a whole host of startling aesthetic effects. 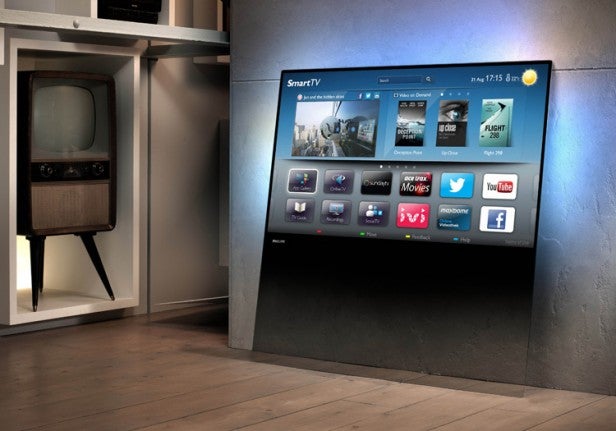 For starters, the fact that the screen goes black when the TV’s not on means the DesignLine set looks like a gorgeous high-gloss monolithic sculpture when you’re not using it. Next, mounting the screen atop a single sheet of glass floor stand creates the impression that the TV is unfeasibly slim and light, moving closer toward that grand TV design idea of a picture that’s just floating in the air.

This ‘floating’ impression is taken to a whole new level, moreover, by the way the black glass gradually fades to see-through glass over the stand’s bottom third or so. This fade to transparency is also outrageously stylish, and makes it absolutely clear – if you’ll forgive the pun – that the TV’s stand really is made from glass; it’s not some sort of optical illusion. 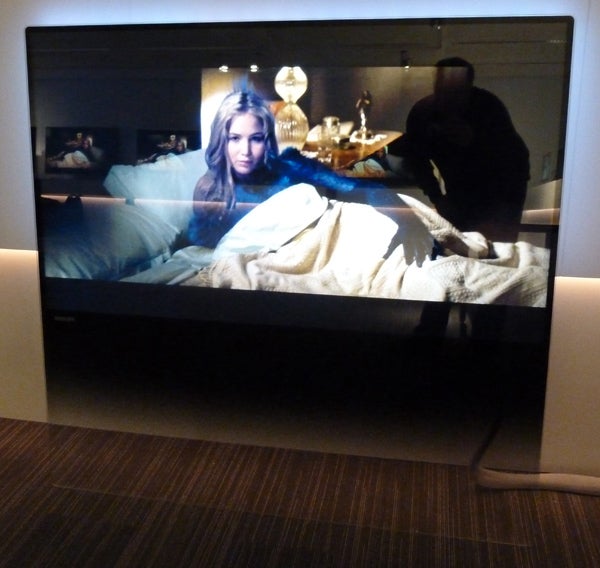 Ambilight is predominantly intended to make viewing your TV a more relaxing experience, but with a TV as slim, tall and handsome as the DesignLine, the Ambilight system also works as a sort of ‘spotlight’ for the TV’s super stylish design.

The DesignLine can be fixed on a wall, though its best setting, if you ask us, is sat directly on the floor, leaning back slightly so that it can be secured to a wall. There will also be a bass plinth later in the year that the TV can slot into, allowing you to move it away from your wall if you wish.

Philips DesignLine – Will It Survive Your Kids?

If you’re a parent to young children, you’re probably looking at the pictures of the DesignLine with a wry smile on your face, calculating how many minutes it will take for Little Johnny to smash Philips’ masterpiece to smithereens. Of course while nobody would recommend repeatedly ramming the screen with a Tonka truck, the stand is apparently made of shatter-proof glass.

While the DesignLine TV is presently all about the aesthetics – until we get it in our test labs, that is – we expect that it will be pretty much on the money in terms of performance. After all, it uses the same picture processing engine found inside Philips’ new high-end 8000 series – a series which produced a spectacular combination of ultra-rich colours, extreme contrast levels, and dazzling sharpness during the Amsterdam press event. 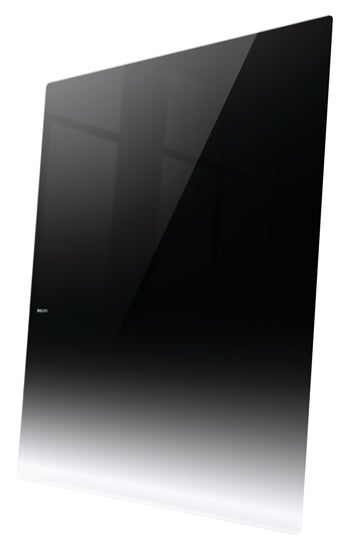 There is one concern we have with the DesignLine from what we’ve seen of it so far, namely that the glass that’s so essential to its design seems rather reflective of any ambient light in your room, potentially creating a barrier between you and what you’re watching. However, on each of the two occasions where we’ve seen the DesignLine so far, it’s been under pretty harsh lighting conditions. Hopefully in the darker setting of our test rooms, this potentially problem will disappear.

If you’re thinking, by the way, that the DesignLine is clearly going to be miles beyond your budget, you might be surprised to hear that the 55-inch model – the only one we’re getting in the UK – is going to cost a far from outrageous £2,800. That’s a heck of a lot less than you’d expect to pay, at any rate, for the latest style-driven TV from the likes of Loewe or Bang & Olufsen.

The DesignLine TV truly is one of the most attractive TVs we’ve ever clapped eyes on, and its specifications point towards it being a potentially barnstorming performer to boot. The Philips DesignLine TV is scheduled to launch in the second
quarter of 2013, so hopefully it won’t be too long before we can find
out exactly how much substance lies behind the admittedly glorious
style. Keep your eyes peeled on Trusted Reviews for our full review.