We’re all familiar with the notion of monitors producing light. After all, you’re likely reading this on one that emits the stuff, whether it uses CCFL or LED backlighting. Less common is the idea of elements outside of the panel producing light too, but it’s an idea that Philips has long ago sold us on with its clever and beautiful Ambilight system on TVs like the Philips 40PFL9704.


However, if all you have budget or room for is a modest PC monitor, you’re not totally left in the cold as you can go for a Philips Brilliance 220X1, whose Lightframe technology is derived from a similar foundation. You still pay a hefty premium for it though, as the 220X1 comes in at over £200 for a 22in 1,680 x 1,050 TN-based display. Is it worth it? 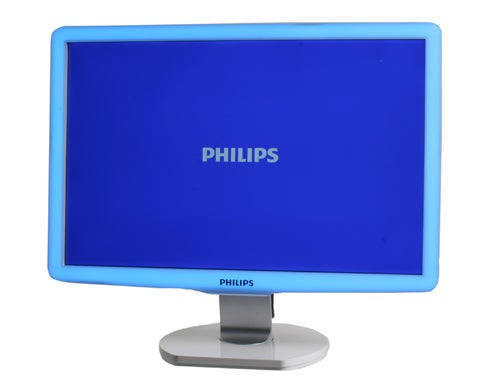 As with Ambilight, Philips claims that Lightframe is not just a pretty show but actually helps to reduce eyestrain and fatigue. Before we check out this unique system, however, let’s see what the monitor itself is like.


Unlike most recent displays, Philips has gone for an all-white look that’s very reminiscent of cheaper Apple products. The only exception to this is the stand’s neck, which is silver. In a nice touch, even the provided DVI, VGA and power cables are white. Overall, while nothing extraordinary, the design is certainly consistent and attractive. 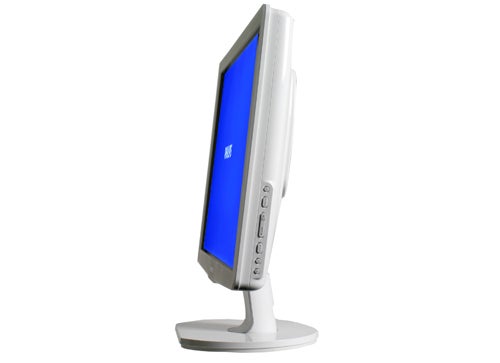 It’s also very easy to assemble, as it’s just a case of clicking the chassis and stand together. Taking it apart is equally effortless, as you simply push in a button-like section at the back. Ergonomics are as poor as on most TN-based budget displays though, as you’re limited to (an admittedly generous amount of) tilt. Connectors are also slightly difficult to insert as there’s little clearance room for the sockets in the curved back section.


Build quality is decent with no perceptible flex or creak. The only minor annoyance is that the monitor wobbles when using the buttons on its side. Though these buttons are hidden behind the bezel making them invisible when viewing the screen front-on, they’re fairly easy to use as the main ones have distinct shapes and fall naturally under your four fingers. We only wish Philips hadn’t placed the 220X1’s power button so close to the others.

Though not very visually attractive, the 220X1’s OSD is logically laid out and easy to use. It offers all the options you could want, and many of these already have dedicated buttons along the monitor’s side; without entering the menu system you can alter the aspect ratio, input, picture preset or light frame intensity. The only direct option we would have liked is the ability to alter brightness/contrast.


Other adjustments unique to the OSD include gamma and colour temperature, which can be set to sRGB, User Defined or anywhere between 5000 and 11500K. Response time overdrive, which Philips calls SmartResponse, and the monitor’s dynamic contrast system – predictably called SmartContrast – can also be turned on or off, which is always welcome. Even the power LED, integrated seamlessly with the Lightframe bezel, can be turned off or set to match the frame in intensity. 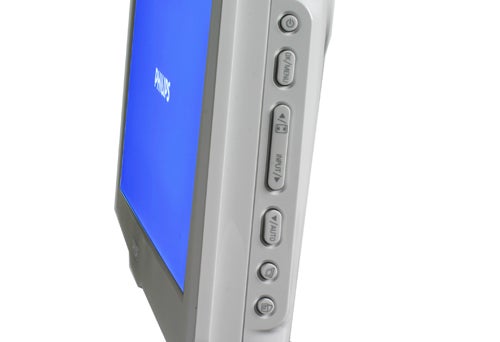 Getting to the TN panel at the heart of this 22in monitor, as already noted it sports an 1,680 x 1,050 native resolution, which considering that you can get a Full HD (1,920 x 1,080) display for half the price these days is very disappointing. Nor does the panel’s performance inspire much confidence.


It suffers noticeably from all the inherent flaws of TN technology, including very poor viewing angles with strong contrast shift if deviating even slightly from the central viewing position, and an inability to show black or white gradations at both ends of the greyscale. This means you’ll be missing out on shadow detail in dark games and films especially, and viewing with a few friends is far from ideal. We also discovered a stuck pixel, the first we’ve encountered on a monitor in quite some time.

However, there is good news too. Aside from some dithering artefacts there is little to no sign of banding and not even a hint of backlight bleed, with backlighting overall very consistent – in fact in this regard the 220X1 is superior to many other TN monitors we’ve looked at. Sharpness is also excellent, ensuring even the smallest fonts are perfectly legible. Last of all its matt coating means there’s a minimum of distracting reflections, and colours are fairly accurate.


A quick word of warning though: whatever you do, do not use the Image Viewing or Entertainment presets, as these result in the worst image quality we have ever come across: radioactive colours, blurry and blocky edges, and hideously unbalanced brightness and contrast settings (doubtless to give some semblance of believability to the ludicrous 30,000:1 claimed dynamic contrast ratio) are just some of the results.

So far, then, the 220X1 is a pretty average monitor, but we’ve barely touched upon its stand out feature: the eye strain reducing Lightframe. While it’s notionally similar to the Ambilight concept seen on TVs, Lightframe is more limited in purpose – it doesn’t change colour at all, nor does it broaden its scope by reflecting light onto a wall. It’s purely there to reduce strain on your eyes and add some aesthetic flare if that’s your cup of tea. You can’t even change the colour from the default blue, though at least that’s the most sensible choice due to its soothing, calming effect. 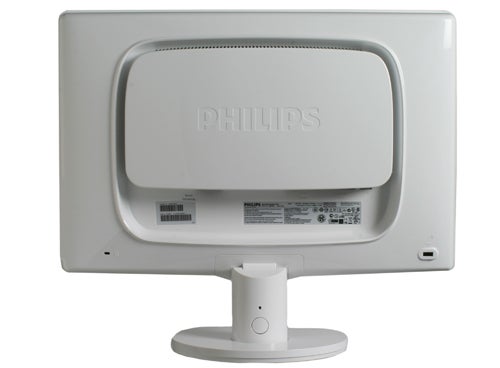 While we did find it distracting at first in a darkened room (like those annoyingly-bright power LEDs on some displays – times ten), after a few minutes of watching video we didn’t even notice it anymore, a bit like a constant background noise being blocked out by the brain after a few hours. If you find yourself unable to get used to it, Philips offers three intensity levels, or you can just switch it off altogether, though that kind of defeats the point of getting a Lightframe monitor in the first place.


In use we did find the Lightframe reduced eye strain slightly over prolonged use, which is no surprise as the science behind reducing eye strain using ambient light is well established. However, while effective, it’s hard to justify the expense of the 220X1 given the alternatives to this bespoke solution. 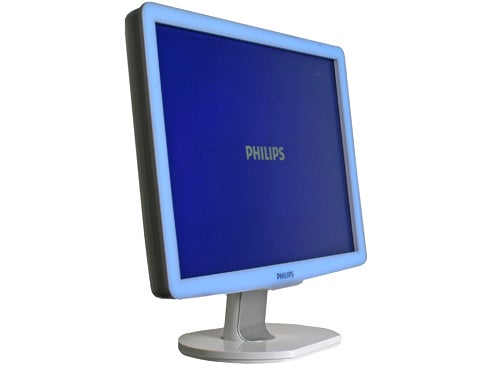 Simply putting a soft-diffused lamp behind your monitor, a method that’s been recognised for years, would have a similar effect and would obviously cost a lot less. With the money saved you could invest in a far better display, like the excellent Samsung SyncMaster F2080 or its larger 23in cousin, the F2380. Both will give you a far superior cPVA panel (offering better contrast, viewing angles, colour accuracy, etc), a fully adjustable stand, more connectivity, and the F2380 adds a larger, Full HD panel while still leaving you £20 to buy an LED lamp to go behind it. Alternatively you could get the super cheap BenQ G2222HDL, also with a Full HD resolution, and have change from £150.


While the potential of the Philips Brilliance 220X1 and its Lightframe is obvious, it doesn’t offer enough to justify the ludicrous price for an otherwise pedestrian monitor.