After spending years in the Blu-ray wilderness, Philips has launched a full-scale assault on the market with a trio of feature-packed BD Live players. The new BDP9100 heads the range and we’ve already cast our verdict on the marvellous midrange BDP7300, but here we turn our attention to the baby of the bunch, the BDP3000.


Listed on Philips’ online shop for £180 but considerably lower if you shop around, the BDP3000 comes with a budget price tag. Inevitably, some features have been sacrificed to reach it, but if this deck does the basics well we could have a bargain on our hands.

You certainly wouldn’t guess it’s a budget deck from its design, which has all the sophisticated allure of a much pricier player. The flat front panel is sparsely adorned with just four buttons and a large display window, plus the curved corners and glossy black finish are pure eye candy.


The only thing missing is the front USB port found on the BDP7300, the first casualty of the low price. However, build quality hasn’t taken a hit – the strong metallic casing makes it feel a lot more substantial than expected.


Philips hasn’t gone overboard on rear connections but provides the essentials. There’s an HDMI output for piping hi-def video and audio to your TV and receiver, and like any good Blu-ray player it outputs 1080/24p as well as HD audio bitstreams.

You also get an Ethernet port for hooking up to the web and making BD Live downloads. Although we’d prefer a nice clean Wi-Fi connection instead of this cumbersome method, it’s perhaps unreasonable to expect wireless connectivity at this price point. The built-in memory isn’t big enough to store downloads either, so you’ll have to keep a USB flash drive plugged into the port on the back.


Frustratingly, this USB port can’t be used to play back digital media, so any MP3, WMA, DivX or JPEG files you want to play have to be burned onto DVD or CD first. Interestingly the deck can also play hi-def WMV files but with limited success – we got a gorgeous hi-def picture but no sound, and with certain files playback is very jerky.


The socket line-up is completed by component, composite, coaxial digital and analogue stereo outputs. Unsurprisingly there are no multichannel analogue outputs like the BDP7300, which will only be a problem if your receiver lacks HDMI inputs and you want to enjoy hi-res soundtracks.

More evidence of cost-cutting is found in the list of supported audio formats. The BDP3000 can decode 7.1-channel Dolby TrueHD soundtracks and output them as PCM from the HDMI output, but it can’t do the same with DTS HD Master Audio. But all is not lost because you can still transfer the raw DTS HD MA bitstream to your receiver.


If you’re upgrading to Blu-ray from a DVD player, don’t sling out your standard-def collection just yet – the BDP3000 upscales DVDs to 720p, 1080i or 1080p, which theoretically makes movies look sharper on an HD TV.


While the BDP3000 might not boast the same meticulous picture adjustments as the Pioneer BDP-LX52, there is a range of presets (Vivid, Cool, Action and Animation) plus an enhanced black level setting.


We were enamoured by the BDP7300’s user interface and we’re glad to see that Philips has used the same design on this cheaper model. Power it up and you’re greeted by the Home menu; a bright, colourful screen that makes things nice and simple by limiting your options to ‘Play Disc’ or ‘Settings’. 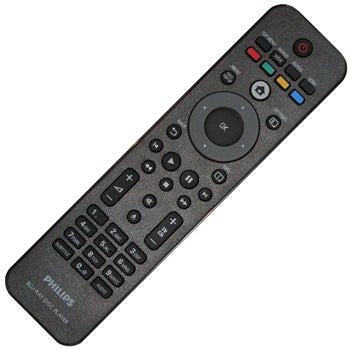 Hit Settings and the subsequent menu is superb – large text fills the screen, eye-catching icons signpost the options and the cursor zips around quickly. And when playing back a disc, large white playback icons pop up then fade away, which is a nice touch.


Controlling the Philips with the supplied remote couldn’t be easier thanks to its carefully arranged buttons. The controls are instinctive, particularly the menu and playback controls which are helpfully grouped next to each other.


As per usual we loaded up our trusty ”Spider-Man 3” Blu-ray disc to test the deck’s loading speed and we were pleased to see it clock in at 33 seconds, pretty much the same as the BDP7300.


Next in the tray was the Silicon Optix HQV disc, and the BDP3000 isn’t phased by any of its tricky torture tests. The Video Resolution Loss pattern has absolutely no strobing to speak of and the bar rotates smoothly.


Next up are the Jaggies tests and the deck’s performance is stunning – the rotating bars boast edges so sharp you could almost cut your finger on them, and they spin with effortless fluidity. Finally the Film Resolution stadium shot is ably handled, some moiré noise in the upper tier of seats being the only weakness.

So far so good, but how does it cope with movies? Very well actually. Images are bright and punchy, with solid contrast, vibrant colours and well-defined edges.


But its most impressive talent is detail reproduction. The opening shot of ”Iron Man”, showing the barren landscape of the Afghan desert, is reproduced with gob-smacking sharpness. The Philips easily picks out the texture of the rocks in the foreground, the tiny shrubs on the ground and the detail on the mountains in the background.


Further into the film we see Tony Stark in his dingy cave workshop, and the deck’s excellent contrast keeps detail visible within the shadows. When he bursts out in the makeshift Iron Man suit, the clarity of the surrounding scenery in the bright sunlight is glorious.

Inevitably, it’s not all good news – the picture is quite noisy at times, some camera pans judder in 24fps mode and blacks aren’t quite inky enough. These aren’t major problems, just slight niggles that stop this player from scaling the same heights as the best decks on the market.


Upscaled DVDs look clean and sharp, with low levels of noise and fluid motion tracking. This is borne out by the Silicon Optix DVD which throws up no nasty surprises – jaggies are competently suppressed and detail is crisp.


Sonically there are no complaints either. Decoded Dolby TrueHD sounds scintillating through a decent receiver – check out the Tony Stark’s Jericho missile demo for proof – and CD playback through the stereo outputs is warm and detailed.


Although the BDP3000 lacks a variety of features, such as DTS HD Master Audio decoding, built-in memory and USB media playback, they’re the sort of things you can live without, particularly at this price. But when it comes to the important stuff like build quality, ease of use and picture quality, the BDP3000 delivers the goods, making this a great choice if you want to get into Blu-ray on a tight budget.