It’s immediately obvious the Philips BDM3490UC is a quality display. Colours are punchy yet natural looking and the contrast between dark and light elements of the picture looks to be strong. The matte finish on the surface also keeps reflections at bay despite the curve.

And what a wonderful thing the curve is. Far more so than with televisions, where you’re sat too far away, with monitors this ultra-wide and curved combination really pulls you into the image, providing much of the feel of a traditional wraparound three-monitor setup but in one screen. You wouldn’t think it when you see what a subtle curve the monitor has, either, but in my experience it really does add something.

Where this is most acutely felt is when watching films and playing games. While not all films are filmed in 21:9 aspect ratio, the majority of big budget films are there, or thereabouts. As such, when watching those sorts of films you’re getting the whole screen filled with the image, and not a squashed version with black bars above and below, as you do on a 16:9 screen. 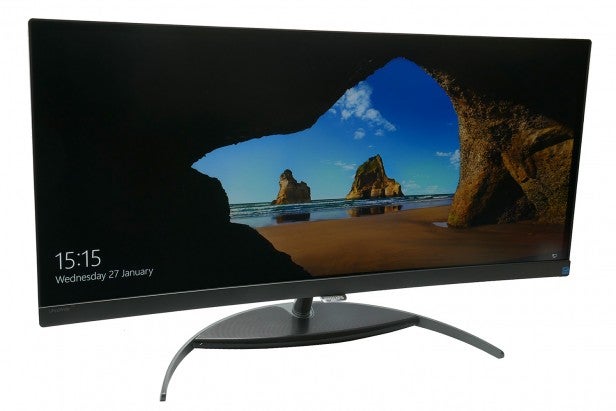 Fire up a game and you’re getting a far more immersive experience too, thanks to the curve and the fact you’re getting a wider field of view. Some games may choose to chop off information from the top and bottom of the image to fit the aspect ratio, rather than add information on the side but most of the time it’ll be the latter, potentially giving you a key advantage.

What’s more, because of the sheer size of this monitor you’re not compromising on general desktop usability either. Whereas with some smaller 21:9 monitors, the vertical resolution was so low that it was a hinderance, the 3440 x 1440 resolution here is ideal.

Of course all these same benefits are also available with most any other 34-inch, curved, widescreen monitor of the same resolution such as the Samsung S34E790C, so the next question is just how well does the screen perform under test conditions. And the answer is very well indeed.

Out of the box, I measured the screen’s colour temperature as 6631K, which is very close to the ideal of 6500K. It also impresses with a black level of 0.235nits combined with an adequate maximum brightness of 261nits, for a contrast ratio of 1117:1.

Finally, after a quick calibration the colour temperature was brought even closer, at 6654K while colour coverage was reported as an impressive 98.7% sRGB and the Delta E (its ability to show fine colour gradations) was a very good 0.09.

In comparison the VA LCD panelled Samsung has better contrast but slightly poorer coverage, colour temperature and Delta E, though both are still very good. The Philips would just take the crown for those looking for more accurate colours, the Samsung for those seeking better contrast for watching films. 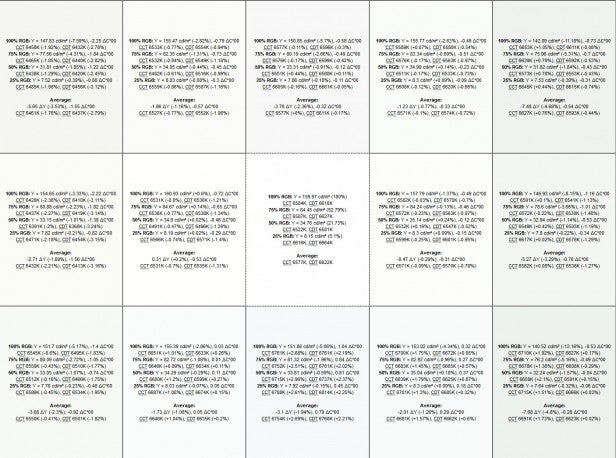 Also good, if not outstanding is the uniformity of the screen. At most brightness drops off by -12.16% in the bottom right corner, as compared to the centre, while the maximum colour shift is -4.68%, again in the bottom right corner. For such a large screen they’re both decent figures and in fact it really is only at those extreme edges that the drop off is anywhere near this bad. The central two thirds is all within 5.06% brightness and 1.94% colour variance.

In comparison the Samsung fares slightly worse, touching on -15% brightness on the right edge and -14% on the bottom edge.

As for input lag, the Philips again impresses. While this is no high-speed gaming panel, it’s as fast as you can get for a 60Hz display. I measured input lag as just 10.7ms, which is comfortably below the 16ms threshold that would result in a repeated frame.

Those potentially divisive stand-mounted speakers do at least provide somewhere close to the performance you’d hope for. They pump out quite a volume and have a reasonably rounded tone so don’t sound shrill. Nor do they break up at high volume.

Inevitably there’s little in the way of true bass oomph and I wouldn’t want to use them for extended music listening, movie watching or gaming but they’re fine for occasional use. Nonetheless, overall I’m still more of the opinion that unless speakers on a monitor are exceptionally good they should probably be kept small and out of sight. 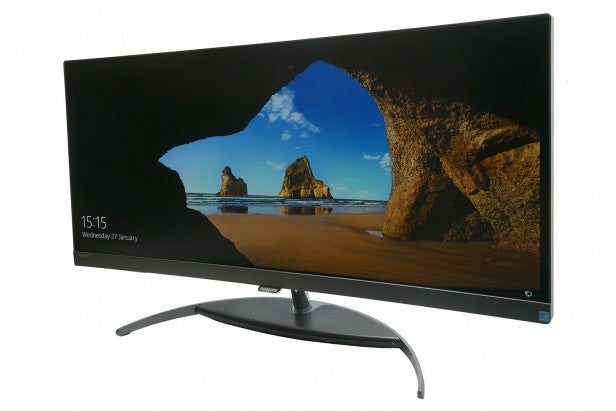 Should I buy the Philips BDM3490UC?

This is a very, very nice display. It combines top-notch image quality with a slim, stylish design, good connectivity and features and a wide, curved presentation that’s undeniably desirable.

As with all these 34-inch curved displays, you’re paying a significant premium for that curve, with otherwise similarly specced but flat-panelled monitors available for around £100-£150 less. But this Philips is no worse than its most direct competitors and I do feel the curve adds something.

In fact it’s the lack of a VESA mount or height adjustment, the potentially pointless speakers and the clunky OSD that do more damage than the high price. None alone is a deal breaker but they do add up. At least the former of these is common to all this monitor’s direct competitors. Also, I’m yet to look at any of those displays so can’t say for certain if they offer a better overall experience.

It’s also worth noting the lack of a high speed panel and either G-Sync or Freesync means this may not be the first choice for those most concerned about gaming.

Nonetheless, if you’re simply after a top-quality, premium monitor the Philips BDM3490UC certainly does deliver.

Possibly one of the most desirable computer upgrades available at the moment, the Philips BDM3490UC is a shining example of just what this new raft of 34-inch, curved monitors gets you. It physically looks good, image quality is excellent and I’m a big fan of the curved, 21:9 aspect. It’s pricey but largely is worth it.