When Philips showed us its new 2011 TV range back in February, there was one rather conspicuous gap in it. For while Philips was proudly showing off the world’s first ‘passive 3D’ 21:9-ratio (as opposed to the usual 16:9-ratio) TV, there was no sign of an active 3D set to replace last year’s flagship 21:9 model, the 58PFL9955H.

This apparent hole in the 2011 range was amply filled at this year’s IFA show in Berlin, though, by the 58PFL9956H: another 58in model featuring direct LED lighting, but which additionally benefits from the latest, seemingly much-improved version of Philips’ already well-respected Perfect Pixel HD video processing engine.

The ultra-wide screen’s use of direct LED lighting means it enjoys local dimming, enabling Philips to quote a huge 10,000,000:1 contrast ratio for its new 21:9 TV. Thanks to a combination of the latest (native 200Hz) panel design and new processing improvements, meanwhile, the 58PFL9956H also claims an unprecedentedly huge 1200Hz ‘perfect motion rate’ that should make motion blur and judder a thing of the past. It also has the potential to reduce the crosstalk issues that bothered us a little with last year’s 3D Philips TVs.

The 58PFL9956H has a new use for its 3D capabilities too: MultiView. This provides a setting on your active 3D glasses that allows you to play two-player games on the TV with each player getting a full-screen picture, rather than having to use the usual split screen approach. 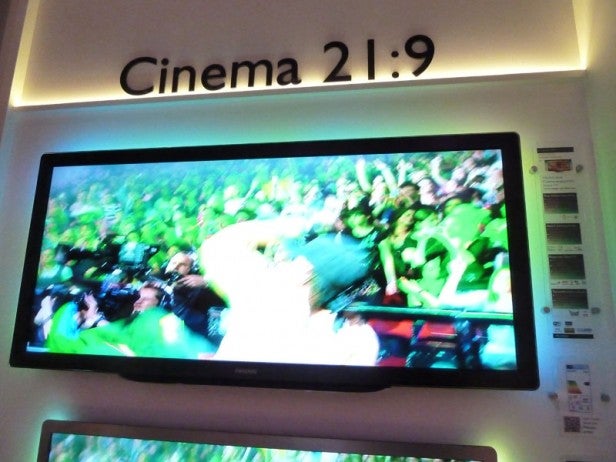 Another interesting feature of the 58PFL9956H will be its ‘Smart TV’ online services. For Philips announced at IFA that along with its current smart TV partners, Sharp and Loewe, it’s now also going to be joining forces with LG. So we should start to see quite an explosion in the amount of online content Philips TVs carry in the coming weeks and months.

It sadly remains a fact that not a single Blu-ray has yet appeared that carries a native 2.35:1/2.4:1-ratio transfer on it, even though the Blu-ray format can support such transfers. Instead, transfers of films with such wide aspect ratios are presented in 16:9/1.85:1 ‘packages’ with black bars artificially inserted along their top and bottom edges to preserve the correct ratio of the original source.

This means that the 58PFL9956H needs to use scaling processing to ‘zoom up’ 21:9-ratio films to fill its 21:9 screen. But during our hands on, as with previous Philips 21:9 generations, we were extremely impressed by how good Philips’ processing is in this regard, retaining both the sharpness and geometric proportions of the ‘zoomed’ picture with remarkable accuracy.

As we’ve noted in reviews of previous 21:9 TVs, moreover, the extent to which being able to watch 21:9 images without the usual black bars around them improves your viewing experience is uncanny.

The picture from the 58PFL9956H is even more spectacularly dynamic, colourful and contrast-rich than that of last year’s direct LED 21:9 TV, which is saying something, as well as boasting that extreme sharpness that’s long been a Philips trademark. In fact, sharpness seems even slightly higher than before, thanks most likely to the latest improvements to the set’s motion handling.

Perhaps the biggest improvement, though, comes in the area of crosstalk, with markedly less of it apparent than we saw with last year’s Philips 3D TVs. However, that’s not to say that crosstalk has been completely eradicated; we were slightly disappointed to still see a few traces of it in background areas of the picture.

Still, while this stopped the 58PFL9956H’s pictures from being absolutely perfect during our session with it at IFA, overall our time spent with Philips’ new movie-loving TV has most certainly got those now-familiar ‘width envy’ juices flowing once again.