The 55PUS8601 is the the most “serious” TV I’ve seen from Philips in the UK for some time. As well as boasting a native 4K Ultra HD resolution, this £1,700 55-inch set features a startling “Razor Slim” design, a four-sided version of Philips’ Ambilight technology, an Android-powered smart TV engine, Philips’ most potent picture-processing engine and – most startlingly of all – a pair of magnetic, detachable speakers.

When you see phrases such as “bezel free”, or “Razor Slim” in the case of the Philips here, the reality rarely lives up to the description. Having said that, there’s no doubt that the 55PUS8601 really is a striking TV.

Video: Trusted explains everything you need to know about TVs

For starters, its slinky black bezel is genuinely slim, and its rear doesn’t extend outwards very far either. Of course, this TV isn’t as thin as a razor, but you can see why Philips’ marketing department wanted to draw attention to its slenderness.

The set’s svelteness is further emphasised by both the strikingly minimalist feet attached beneath the bottom corners of the TV, which are angled so that you see only their narrow edge, and a four-sided implementation of Philips’ Ambilight technology.

For those unfamiliar with Ambilight, it’s a system that uses LED lights on the TV’s rear to throw out coloured light that can be set to match the colour content of the images you’re watching. It achieves this with startling colour and positional accuracy. 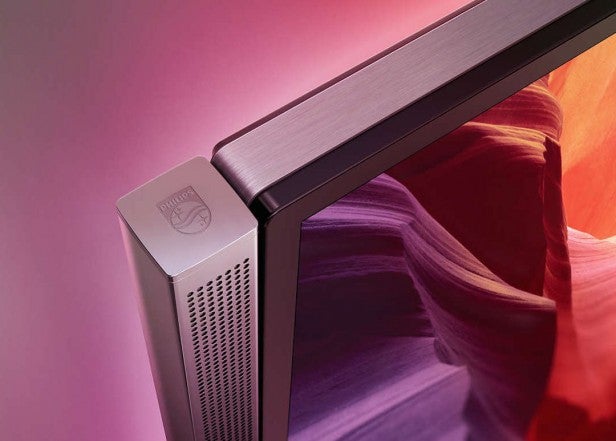 Most Ambilight implementations I’ve seen recently only involve the left and right sides of the screen, but the 55PUS8601’s four-sided approach makes the immersive effects of the technology even more impressive.

The only slight issue is that in order to make room for the Ambilight output at the bottom edge of the screen, the TV’s feet have been pushed out to the extreme corners. As a result, the furniture your TV sits on will have to be as wide, unless you intend to wall-mount it.

But Ambilight doesn’t take the award for the 55PUS8601’s most extravagant design feature; that goes to Philips’ use of glamorous and seriously well-engineered detachable speakers.

Rather brilliantly, these squared-off “pole” speakers – made from seamless dark chrome – attach magnetically to the TV’s left and right sides. Or, for around £300, you can invest in a pair of floor mounts for the speakers that will increase the scale of the soundstage and add a few extra bass drivers too.

Detached from the screen the speakers are wireless, so you don’t have to worry about trailing cables. 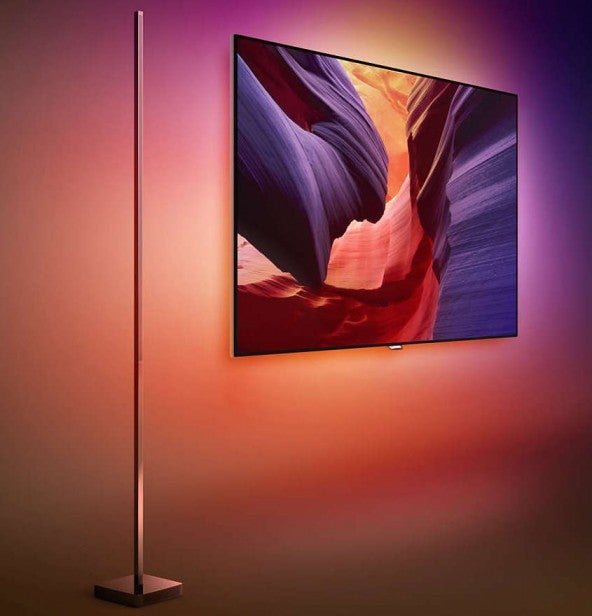 Despite being only 17mm wide, these eye-catching speakers squeeze in a startlingly impressive audio system comprising 18 speakers, 16 micro-drivers and two neodymium subwoofers. This is enough to churn out 50W of what I’m hoping will be crystal-clear audio that’s far beyond the capabilities of typical TV audio systems.

Given the slimness of the 55PUS8601, it’s no surprise to learn that the TV delivers its pictures using an edge LED lighting system rather than a direct-lit one. However, it still claims to be capable of playing high dynamic range (HDR) content. A firmware update will make this feature live in six weeks from the time of writing, so obviously I wasn’t able to test HDR playback for this review.

Likely key to this HDR support is the set’s proprietary Bright Pro technology, which apparently delivers a light output of 700 nits – much higher than the 400-450 nits you typically get from edge LED TVs. There’s even an HDR setting option in the Bright Pro part of the TV’s menus.

In addition, the 55PUS8601 uses a combination of Micro Dimming Pro and Local Contrast features to boost contrast. Micro Dimming Pro divides the image into 6,400 different analysis zones, considers the light conditions of the room in which the TV is in, and then manipulates the image settings accordingly. 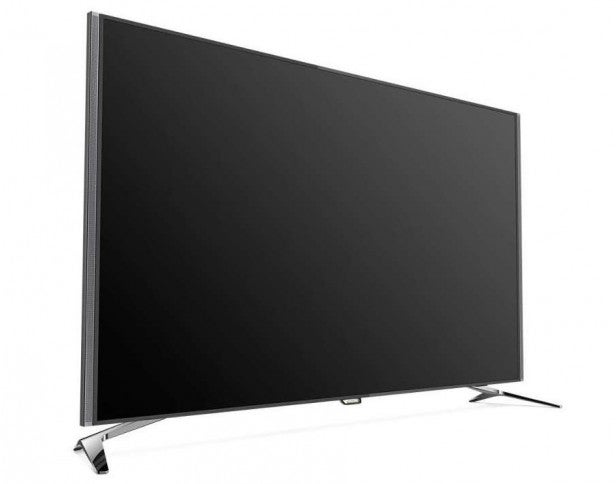 Local Contrast, meanwhile, works in conjunction with the Micro Dimming Pro system to pick out fine detail in dark areas by manipulating the contrast in those areas, without affecting the brightness of the rest of the picture. This could help the 55PUS8601 deal with an issue that often affects edge LED TVs, whereby dark areas appear hollowed out because they’ve had their low light details “crushed out” in the TV’s bid to deliver a believable black colour.

With so many contrast and brightness features in play, it’s no surprise to find the 55PUS8601 claiming a super-high contrast ratio of 500,000:1.

Another stand-out figure is the 55PUS8601’s frame rate of 1,800Hz, delivered via a combination of frame interpolation processing and a scanning backlight. You don’t have to use this system to its full extent, of course, but given the processing power available to it as part of Philips’ Perfect Pixel Ultra HD picture-processing system, experience suggests it might prove helpful with specific content.

Philips also claims to have improved the MPEG Artefact NR feature now common to modern digital TVs courtesy of “Smart Bit Enhancement”. This claims to be able to apply 14-bit precision to 8-bit video, resulting in vastly smoother colour gradations that are free of the banding/striping issues commonly seen with digital video signals.

Looking beyond the 55PUS8601’s picture technology, the 50W detachable speaker system is bolstered by support for the DTS Premium Sound platform, while the TV’s smart features are expanded massively by the inclusion of Google’s Android TV platform.

This platform isn’t without its issues, as described in our dedicated feature. However, it certainly helps Philips solve its previous problems with delivering a competitive number of apps and online content options, especially now that it supports both the BBC iPlayer and the 4K version of Netflix. Note that the Amazon video app, ITV Player, All 4 and Demand 5 catch-up apps are still missing.

It’s worth adding that thanks to the 55PUS8601’s Hex Core engine and Philips’ relatively long experience of working with Android TV, the smart platform runs both more slickly and more stably than it has done to date on Sony 2015 TVs.

Philips has always provided superb control over pretty much every aspect of its video processing and core picture technologies. This is great, since it raises the possibility of achieving pictures the way you want them. On the other hand, you may well end up spending more time in the 55PUS8601’s menus than you really want to – especially since different settings for some of the processing features suit some types of content but not others.

After plenty of tinkering, I found the following settings achieved the best general results. However, I should reiterate that for optimum performance, it will be necessary to tweak items repeatedly for different types of source. 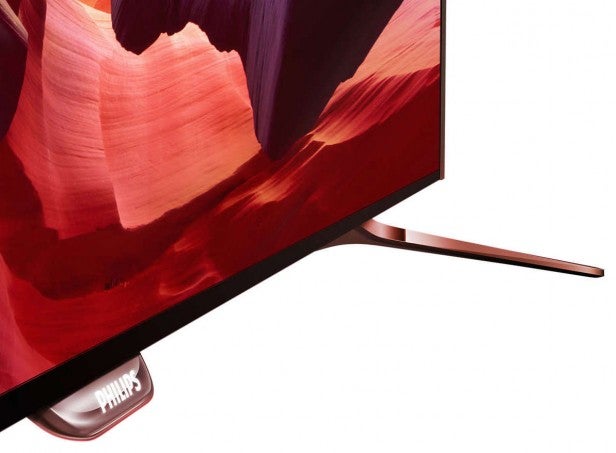 Looking at the picture presets first, it was the Standard option with which I felt most comfortable. Although the Cinema one sounds promising, it actually just turns off most of the TV’s picture processing, which doesn’t do the 55PUS8601’s images any favours at all.

There are two ISF (Imaging Science Foundation) modes, which show the TV supports professional calibration by a trained ISF engineer. But assuming you’d rather not pay for such a calibration, here are my tips.

First, turn off the set’s colour-enhancement feature; for the most part this just seems to add more blue to the palette. Set the Contrast Mode to Standard – sadly, the Best Picture mode causes far too many distracting brightness “jumps”.

Next set the Bright Mode to off, the Perfect Contrast setting to maximum, the brightness to its 49 level and the video contrast level to 83. Turn off the light sensor, and nudge the gamma down to -1 from its start point. Turn on the Ultra Resolution option for high quality, relatively grain-free sources; you may find you need to turn it off with grainier sources. Turn off all of the TV’s noise-reduction options.

Finally, set the Perfect Natural Motion motion processing to its “minimum” level for most viewing, although you could nudge it up to “medium” with sport, or turn it off with noisy/grainy sources.