We might as well say right away that in a debut year for 3D that hasn’t been quite the flawless success we might have hoped for, the Philips 46PFL9705H is a truly significant product.


Not because it suddenly makes 3D perfect. But rather because it’s the first non-plasma 3D TV we’ve seen that actually makes 3D look both consistently convincing and, more importantly, watchable over an extended period of time without getting a headache.


The 46PFL9705H is, of course, the (substantially) bigger brother of the 32PFL9705H we looked at and largely loved a few months back. If you read that earlier review, you may be surprised to find that the 46PFL9705H supports 3D playback while the 32in model does not. Basically Philips took the view that 3D wouldn’t deliver enough of an impact on a 32in screen to justify adding it to the 32PFL9705H and hiking its already premium price even higher.


Clearly, however, a 46in screen is more than capable of delivering an immersive 3D experience. And on paper the 46PFL9705H seems unusually well qualified to deliver the 3D goods. 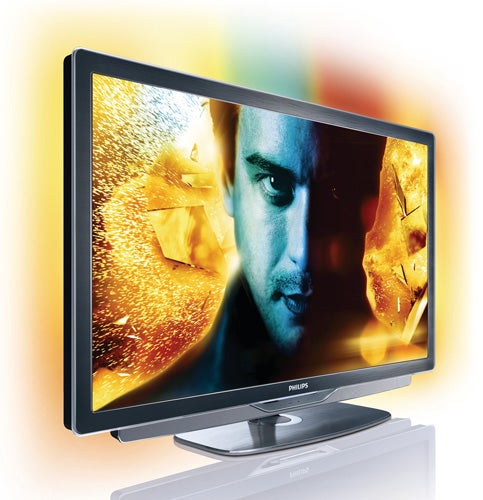 For starters, thanks to a combination of the set’s direct LED lighting system (where the LED lights sit directly behind the screen), 400Hz processing and Philips’ uber-powerful Perfect Pixel HD processing system, it claims a response time of just 0.5ms – the lowest yet seen from an LCD TV.


Obviously we’d treat this figure with something of a pinch of salt given the amount of processing ‘rocket science’ that’s behind it, but it’s an impressive claim nonetheless – and one which bodes well for the 46PFL9705H’s 3D performance, where speedy response is king.


The other thing raising our hopes about the 46PFL9705H’s 3D pictures is the proven ability of Perfect Pixel HD processing when it comes to boosting the sharpness, colour and motion handling of even the most complex of sources (provided you treat the processing options with care, at least). If Philips can translate Perfect Pixel HD’s many talents into the 3D realm, the results could be pretty profound – especially where Sky’s reduced-resolution, side by side 3D broadcasts are concerned.


Given how many of its features are potential 3D aids, it’s a touch disappointing that the 46PFL9705H doesn’t include its 3D transmitter within its body. Instead, you stick the provided external transmitter into a special socket on the TV’s rear.


The reason for this is simply that Philips originally saw a different market model for 3D – one where 3D would be added to TVs via optional, extra-cost 3D ‘packs’ rather than being built into TVs as standard. But of course, with every other manufacturer including 3D free with most of their 3D TVs, Philips has ended up having to follow suit, and now includes the transmitter and two pairs of active shutter glasses with the TV.


The fact that you get two pairs of glasses helps a little with justifying the 46PFL9705H’s rather high price point, given that the glasses cost £100 each if bought separately.


Actually, while hardly cheap, the 46PFL9705H’s price has turned out to be nothing like as high as we’d initially expected. This is partly thanks to the decision to throw in the 3D gubbins, and partly because Philips didn’t put a Freeview HD tuner into the set, and has thus felt obliged to reduce the price of all its TVs by £100 or so.

The 46PFL9705H’s design also does a great job of instantly making you feel good about the hefty sum of cash you’ve just spent, thanks to its beautiful aluminium finish, slender proportions for a direct LED TV, and, of course, Philips’ Ambilight feature, which throws out coloured light sympathetic to the image content from the TV’s sides. 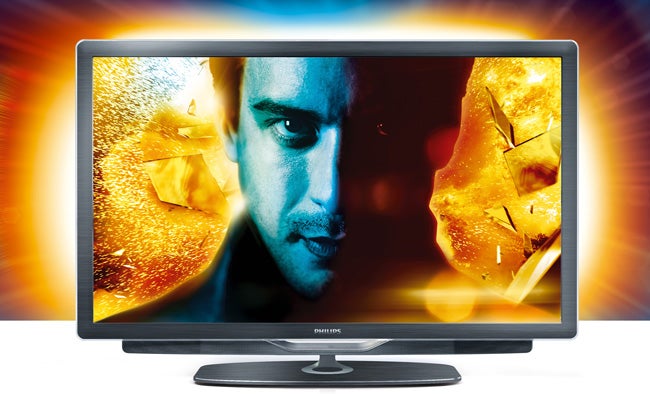 Since we want to focus on the 46PFL9705H’s 3D performance, we don’t intend to go into all the picture settings and features of the 46PFL9705H in depth here; and anyway, we covered this in the 32PFL9705H review. Suffice it to say that you get the usual monumental feast of adjustable processing, reams of connections, and loads of multimedia playback support – including full Internet access. All delivered via a surprisingly manageable onscreen menu system and superbly conceived remote control.

There are two main fronts to the 46PFL9705H’s 3D appeal, one slightly expected, the other a pleasant surprise.


The one we might have predicted, to some degree at least, is that the 46PFL9705H’s 3D pictures really are intensely coloured and bright compared with your average 3D picture. They arguably even outgun those of Samsung’s aggressive 3D LED sets in this respect, drastically reducing the sense of disappointment – especially with 3D plasma TVs – at disappearing brightness usually associated with popping active shutter 3D glasses on.


The 46PFL9705H’s implementation of direct LED lighting even allows its 3D pictures to look more intense and dynamic than those of the brand’s recently reviewed 40PFL8605H model. And that TV could hardly be considered a shrinking 3D violet itself.

The less predictable but easily most welcome thing about the 46PFL9705H’s 3D pictures is how little they suffer with crosstalk compared with both Philips’ own 40PFL8605H entry-level 3D set and, more excitingly, the rest of the 3D LCD world as a whole.


If you’ve missed all our reviews of previous 3D TVs, crosstalk noise is the appearance of double ghosting around certain objects – especially those in extreme close up, or the mid to far distance. It can occur in a source if care isn’t taken with that source’s photography or 3D mastering, but more disturbing by far is how much of it has been generated by the screens – specifically, the LCD (as opposed to plasma) screens – we’ve tested so far.


We’ve slowly but surely grown to detest crosstalk, so the fact that crosstalk noise is much less aggressive and distracting on the 46PFL9705H than with any other LCD TV is genuinely a big deal. It suggests for the first time that maybe, just maybe, LCD technology really might be able to show 3D convincingly after all at some point down the line.

We need to stress that the 46PFL9705H certainly isn’t completely crosstalk free, or even nearly as free of it as the 3D plasma TVs we’ve seen. But it’s less common than on any other LCD TV, and less aggressive even when it does appear. When it does crop up, it looks rather like a deep pencil line on a piece of paper that’s had an eraser rubbed over it a couple of times – i.e. still there, but relatively faint.


Not everyone, we know, is a fan of judder-reducing motion processing on TVs. But provided you don’t set the 46PFL9705H’s Perfect Natural Motion system too high, it can further help the sense of clarity you get from 3D material, helping you to retain your focus as objects move in and out of the image.


The direct LED system further helps the 46PFL9705H retain a good sense of contrast with 3D pictures compared with any of the edge LED 3D TVs we’ve seen, with one final strength of the 46PFL9705H being its unusually bright picture. This gives a better sense of 3D sharpness than you tend to get with duller 3D images. As hoped, moreover, Perfect Pixel HD’s processing talents do seem to help Sky’s reduced resolution 3D pictures look a little sharper than they usually do. 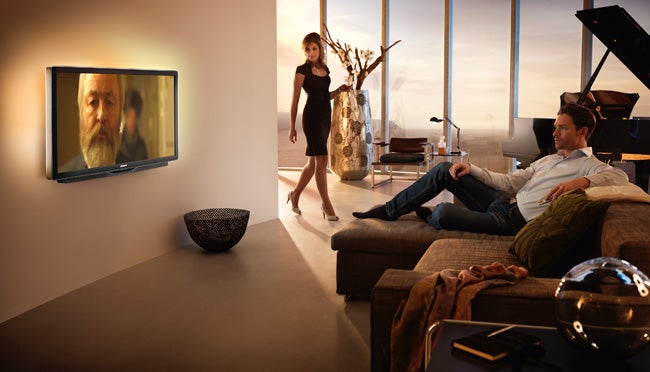 If the 46PFL9705H’s general success with 3D pictures is something of a surprise, its superb talents with 2D material are less of a shock given the 2D talents of last year’s PFL9704 models.


Black levels are nothing short of remarkable, actually outgunning all but the very best plasma TVs, and leaving almost all LCD models for dead. Colours are explosive but not unnatural if you’re sensible with their settings; detail levels and sharpness with HD but also standard definition are stellar; and the set’s ability to suppress noise is uncanny – especially compared with earlier Philips processing engines.


As always with Philips TVs, you can make a royal mess of pictures if you don’t a) commit to learning what most if not all of the processing options available in the TV’s menus do, and b) regularly revisit these options to tweak them to suit different source types. But believe us: your efforts will be supremely rewarded.


The only other issue we have with the 46PFL9705H’s pictures is that if you have to watch from a wide angle, you can see cloudy haloes around bright objects when they appear against dark backdrops.


Unlike most thin LCD TVs, the 46PFL9705H’s performance charms don’t end with its picture quality. For as with the 32PFL9705H, a system of separated dome tweeters to the TV’s fore and two mid-range woofers on the set’s rear create a dynamic, clean, well-rounded soundstage that’s without peer unless you step up into the esoteric world of Loewe and B&O.


The addition of 3D to the 46PFL9705H ran the danger of undermining what was very likely to be a spectacularly good 2D TV. But while the set doesn’t remove quite enough crosstalk to totally steal plasma’s current 3D thunder, it certainly sets new 3D standards for the LCD market. And in doing so, it makes the 3D choice between no crosstalk but less brightness and detail with plasma, and some crosstalk but more brightness and sharpness with LCD considerably tougher than it was before. Especially given that the 46PFL9705H also enjoys a huge feature count, excellent audio and sensational 2D performance. 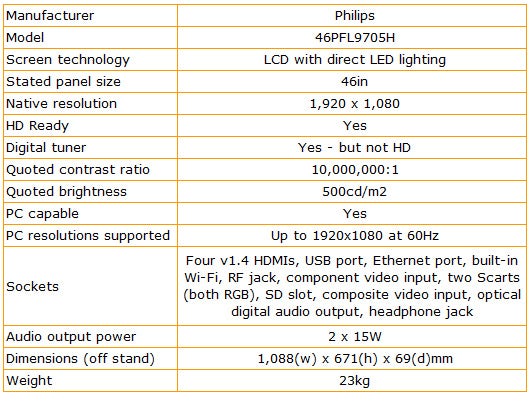