People of a religious inclination should look away now. For terrifyingly
we’re about to review a TV with the numbers 666 in its name. Shudder.
Here’s hoping the mid-range Philips 42PFL7666 turns out to be at least a
bit easier to live with than Damien Thorn…

There’s certainly
nothing evil about the 42PFL7666’s looks, though you could perhaps call
it devilishly handsome. In fact, its metallic finish is very fetching
for its £820 price level, even though it’s applied to a somewhat
chunkier chassis than we might ideally like to find these days.

The
42PFL7666’s looks are enhanced by its provision of a ‘stereo’ version
of Philips’ Ambilight technology. This disperses coloured light from
each of the TV’s sides that can be matched – with surprising colour and
location accuracy – to the image content being shown. As noted in
previous Philips reviews, this can make your viewing experience feel
more immersive as well as giving the TV extra style points. 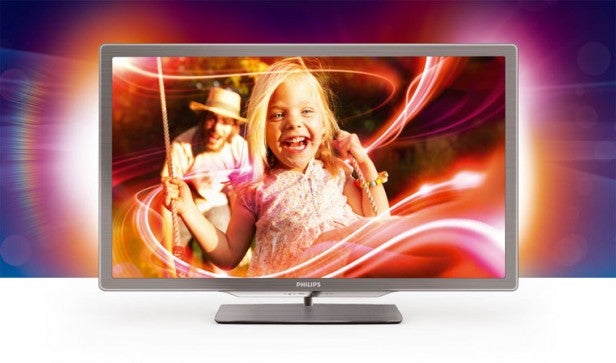 Philips
tends to be very generous with features even on its mid-range TVs. And
so it proves with the 42PFL7666. Its connections, for instance, include
four v1.4 HDMIs, a D-Sub PC port, a pair of USB ports for playing back
multimedia files or recording from the digital tuner, and even built-in
Wi-Fi.

As you’d hope of a mid-range TV in 2012, this Wi-Fi system
can be used for both accessing multimedia files stored on a
DLNA-capable PC and accessing online ‘Smart’ services. The multimedia
files playable include a satisfactory amount of video, music and photo
formats, while the online platform is Philips’ NetTV system.

NetTV
is solid by online TV service standards, thanks to its inclusion of
such applications as the BBC iPlayer, Facebook, HiT Entertainment,
TuneIn Radio, iConcerts, Twitter, Viewster, Aupeo, Box Office 365 and
the Cartoon Network. Look more closely at the NetTV services, though,
and there’s no hiding the fact that there aren’t as many free video
services as you get with some rival smart TV platforms – especially
those from LG, Samsung and Sony.

There aren’t as many apps or
online features as you get with many other big platforms either. And
while the interface for NetTV is adequate right now, it’s likely to
become a little clunky as Philips (hopefully) adds more content. 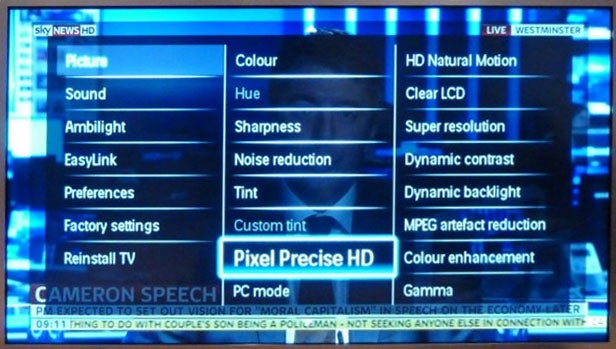 The
42PFL7666’s screen is a full HD one, illuminated by edge LED lighting.
Its pictures are ‘driven’ by Philips’ Pixel Precise HD engine too –
promising news, even though Pixel Precise HD is only around half as
powerful as the Perfect Pixel HD system sported by Philips’ 2012
flagship models. Certainly we’ve seen Pixel Precise HD do some pretty
eye-catching things to sharpness, motion and colour handling on previous
Philips TVs.

Philips has become the latest brand to offer a
mixture of active and passive 3D technology in its current TV range,
with the 42PFL7666 going the passive route. Which means there’s a
polarising filter sitting across the front of the screen that helps it
deliver 3D while you’re wearing simple, lightweight, flicker-free and
ultra-affordable passive glasses. Given how cheap passive glasses are,
it’s perhaps a pity Philips only gives you two pairs for free with the
TV. But at least adding extra pairs won’t cost you much.

As usual with a Philips TV, getting the best out of the 42PFL7666 means having to familiarize yourself with the set’s extensive, slightly complex and marginally sluggish onscreen menus. The thing is, Philips provides the tools to tweak just about every part of its pictures, from noise reduction systems to processing elements designed to improve everything from contrast to colour saturations and sharpness. And it’s possible to mess pictures up quite badly if you don’t apply caution to some of the processing tools on offer.

To make things even more complicated, different types of source benefit from different settings for some of the picture tweaks – especially the motion and noise reduction systems.

To be fair, the 42PFL7666 is more forgiving with its processing elements than some previous generations of Philips TVs. So you don’t HAVE to devote yourself to learning your way round its setting intricacies if you really don’t want to. But we’d still strongly recommend that you do, as this is the only way to continually get the best out of the set.

With this in mind, it’s nice to find that the remote control used to access all the features on the 42PFL7666 is a very good one, looking good, feeling elegant to hold and featuring a terrific layout that delivers full functionality from remarkably few buttons. 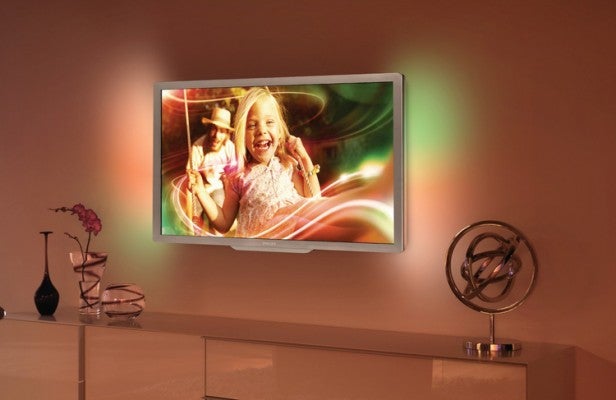 Firing the 42PFL7666 up, our first thoughts were that its pictures were excellent. For instance, the set does a terrific job of resolving the detail and sharpness that makes HD, what it is. There’s also pleasingly little motion blur to worry about.

HD footage also allows you to fully appreciate the range and subtlety of the 42PF7666’s colour tones. These tones are punchy too, thanks to the screen’s impressive brightness for a mid-range edge LED TV.

When it comes to 3D the 42PFL7666 continues to do a pretty excellent job. The brightness and colour richness of its 3D images is truly startling, and we didn’t feel as aware as we often are – at least from a ‘normal’ viewing distance – of the horizontal line structure created by the passive filter on the screen. The 3D images look sharp too (albeit not as sharp as the best ‘full HD’ active 3D images), and as always with passive TVs, it’s great that you don’t have to worry about active 3D’s flickering or crosstalk concerns (unless you view the set from an angle of more than 12 degrees above or below the screen). Finally, there’s a good sense of depth to 3D images, and there’s minimal blur or judder to disrupt your ‘3D connection’.

Philips has long blazed a trail where motion processing is concerned, with its latest Perfect Pixel Engine arguably delivering the finest motion handling of any LCD TV yet. And while the Pixel Precise HD engine in the 42PFL7666 isn’t quite as assured (there are a few unwanted side effects such as slight halos around moving objects), for at least some of our sources the processing’s advantages outweighed its negatives. If you disagree, you can always turn the motion processing completely off.

Switching to standard definition 2D, the fact that the 42PFL7666 uses Pixel Precise HD rather than the higher-level Perfect Pixel HD system becomes more noticeable. Standard def pictures still look sharper than you see with many affordable LED TVs, but colours lose a little of their lustre and naturalism, and noise levels are higher. You can control the noise to some extent by using the noise reduction processing, but this inevitably causes more softness – a trade that you don’t have to make so obviously with Philips’ more highly specified TVs.

It’s during dark scenes, though, that you see the 42PFL7666’s biggest flaw. We were quite surprised by how milky its black colours look, especially after the spectacular black level successes of the Philips 46PFL9706. And no matter what we tried in terms of adjusting the picture settings, we never really managed to overcome this issue to our satisfaction. Even with brightness set down as low as 40. 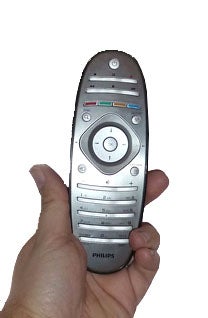 Activating the dynamic backlight can help a little, but it can also make the picture noticeably unstable, with obvious brightness ‘shifts’ during dark scenes. There’s some loss of shadow detail during dark scenes thanks to the slightly shallow black rendering too, and we also detected traces – though thankfully only minor ones – of backlight inconsistency.

If you’re thinking the 42PFL7666 might make a good gaming monitor, you’re probably right. For we measured its input lag at a very respectable 38ms – though some measurements came up showing as little as 6ms.

The 42PFL7666’s sound quality is surprisingly good. You can get a decent amount of volume out of its speakers, and there’s an open, rounded feeling to its soundstage. Even deep male voices sound convincing. There’s a slight brittleness to trebles and thus slightly harsh tone at high volume, but at least there’s a modicum of bass to be heard and always lots of detail.

Verdict
For most of the time, the 42PFL7666 is a great TV for its money. Bright scenes look rich, punchy and sharp, especially with HD sources, and its 3D pictures are arguably the best we’ve seen from a passive 3D set.

A rather average black level response prevents the set from earning an unreserved recommendation, but when the 42PFL7666 is good, it really is very good indeed.