A few weeks ago we looked at and were very impressed by Philips’ 42PFL7404: an actually affordable 42in model that still offered at least a taste of the heavy duty processing power for which Philips is becoming famous – or infamous, I guess, if you’re one of those people still clinging to the idea that lots of processing inevitably leads to pictures that don’t look natural. 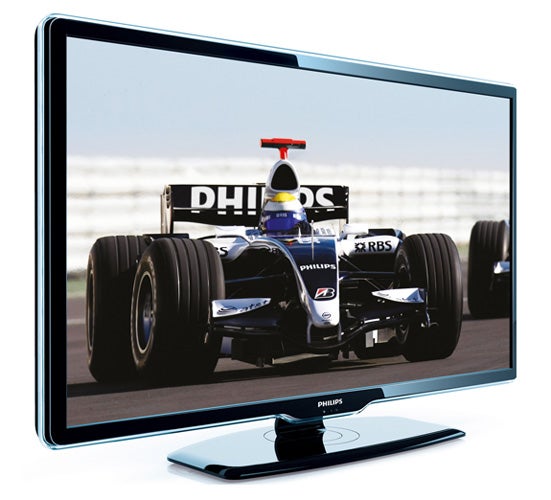 So we thought it made sense with the January sales upon us to look at how well the 7404 Series’ ‘stripped down’ processing approach works on a smaller, much more affordable screen: the 32in, £560 32PFL7404. Will Philips’ processing efforts still be visible enough at this size level to warrant stepping up to the 32PFL7404 from ultra-cheap models like Toshiba’s 32AV635D and 32AV615D?


First impressions are promising. For the 32PFL7404’s design is really quite exquisite by the usually cheap and cheerful standards of the sub-£600 32in market. Its unusually slender bezel immediately sets a futuristic tone, which is then reinforced by the way a translucent outer ‘shroud’ curves forward around the main black frame.


The only disappointment for me is that Philips has had to strip all traces of its Ambilight technology out of the 32PFL7404, meaning your viewing experience is not enhanced by any sympathetic coloured light emissions from the TV’s sides. Boo. Though if you’re one of those miserable blighters who finds Ambilight gimmicky and flash, then I guess you’ll be only too happy at its removal from the 32PFL7404. 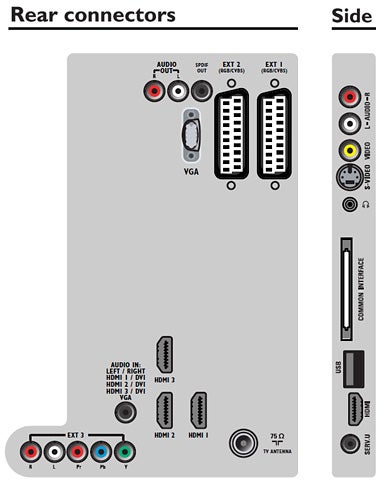 Philips hasn’t compromised as much as it might have with the 32PFL7404’s connections. There’s still a highly credible count of four HDMIs, for a start. Plus you get solid multimedia support from a USB socket able to take in and play a surprising number of AV file types, and a PC input.


As part of its cost-cutting measures to make the 32PFL7404’s price possible, Philips hasn’t been able to give it the Ethernet port found on the brand’s step-up 8404 and 9000 TV series. So there’s no DLNA PC streaming, and no access to the Internet. But while a pity, this is hardly a deal breaker for the 32PFL7404’s sort of money.


Especially as elsewhere it has some quite nice specifications up its sleeve. It has a Full HD resolution, despite its size and cost, and it claims a contrast ratio of 80,000:1 that ranks as one of the highest we’ve seen on such an affordable 32in TV. And then, of course, there’s the TV’s video processing, which here consists of something called ‘Pixel Precise HD’ in conjunction with 100Hz.

Even finding 100Hz processing on a £560 32in TV would put a smile on my face, but the addition of the Pixel Precise engine means my processing cup runneth over. Well, nearly.


Very briefly (since I covered it in more detail with my review of the Philips 42PFL8404), Pixel Precise HD works with approximately half the power of Philips’ flagship Perfect Pixel HD engine, slightly reducing the number of things it can work on in real time, and potentially leaving you with more video artefacts. This latter issue will likely raise alarm bells in people who historically haven’t taken to Philips TVs because of the side effects that did indeed used to be associated routinely with brand’s earlier processing routines. 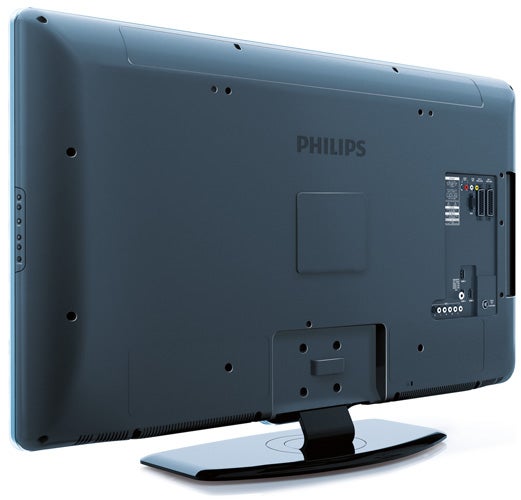 So I might as well hint right here that although not as clean and pure as pictures created using Philips’ latest Perfect Pixel flagship processing engine, the 32PFL7404’s images really aren’t the mess of video processing distractions you might be fearing.


Or at least that’s the case provided that, as ever with Philips TVs, you’re not afraid to get well and truly involved with the 32PFL7404’s expansive onscreen menus, within which you can find options to fine tune just about every individual element of the whole picture processing engine.


Particularly key to keeping images looking their best are the Natural Motion, sharpness-related and noise reduction options. I’d suggest revisiting these options regularly for different programme types – for instance, deactivating the Natural Motion circuitry for films, with which it can generate quite overt side effects like shimmering around moving objects.

With this in mind Philips would probably be well advised to introduce on subsequent ranges a series of at least three separate user-definable picture ‘memories’, instantly accessible via a single button, so that you can set up different picture settings for, say, standard definition, HD movies, and HD sports, and select the relevant memory slot quickly as and when you need it.


When they’re firing on all cylinders – or to be more precise, when the various picture ‘planets’ are all in alignment with the source material you’re watching – the 32PFL7404’s pictures really are very good indeed for such an affordable TV.


HD images are clean and crisp too, and as usual with Philips TVs, the Natural Motion processing ensures that the sense of clarity does not crumble in the usual LCD way when a scene contains a lot of motion.

The 32PFL7404 also overcomes the limitations of its screen size when it comes to brightness, driving pictures out into the world with the sort of aggression usually reserved for much larger models. If you’re after a decent-sized TV for a bright conservatory or even kitchen, the 32PFL7404 is more than up to the job.


The 32PFL7404’s brightness helps it produce terrifically intense colour saturations too – yet the intensity is carefully judged, so that it doesn’t tip over into tones that look cartoonish. Except for when you’re actually watching a cartoon, of course! 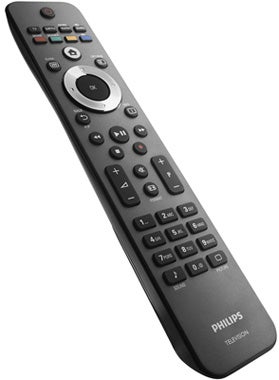 The 32PFL7404’s black levels are good for a sub-£600 TV too, with only a little greying over to contend with, and reasonable amounts of shadow detail visible even after you’ve toned down the set’s backlight and brightness settings considerably.


At this point it’s important that I introduce a ‘reality check’. Namely that the picture strengths just described have been considered within the context of other similarly affordable 32in TVs. If you looked at the 32PFL7404 side by side with Philips’ 32PFL9604, you would immediately be struck by the extra black level response and above all extra purity of the latter’s flagship images.


For there’s no doubt that Pixel Precise HD isn’t as immune to processing artefacts as its posher Perfect Pixel sibling, with a grittier look to standard definition fare; more obvious and common shimmering around moving objects; and more flickering over really fast motion. 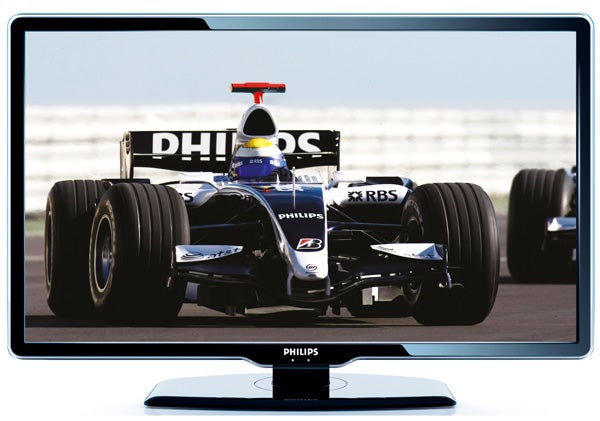 But while all this – and the extra multimedia talents – might give relatively well-off folk plenty of reason to find the extra £200 or so needed to procure a 32PFL9604 now, the generally positive comparisons to be drawn with other similarly priced 32in TVs are probably more useful to most people.


The bottom line is that the 32PFL7404 can – frequently – produce quite superb pictures. And even when it stumbles a bit, it never gets anything close to horrible.


I guess you could argue that the positive impact of Philips’ image processing isn’t as pronounced on a relatively small screen like this as it is on Philips’ bigger models. But you could also look at this the other way, and say that the few side effects of the Pixel Precise HD engine are less pronounced too!


With the 32PFL7404‘s skinny frame also managing somehow to produce some surprisingly potent, well-rounded and detailed audio, when all the pros and cons are duly weighed, Philips once again appears to have come up with a seriously attractive all-round TV package. Only this time, for a change, it’s done it at a really affordable price.


The 32PFL7404 may see Philips taking a break from its customary innovating, premium pricing and flag-waving, but still manages to be a pretty terrific little – and affordable – TV. 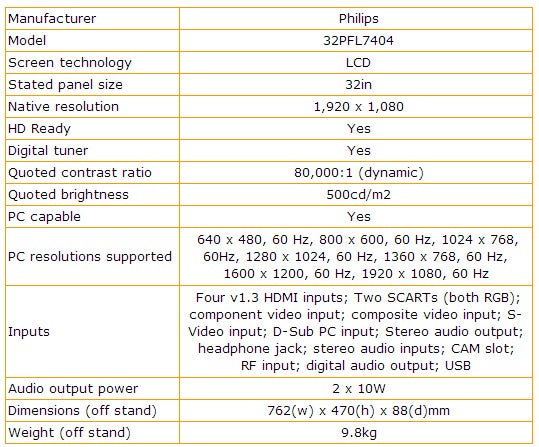