The Philips 24PFS5231 is a 24-inch LCD TV with a twist: its desktop stand cunningly doubles as a Bluetooth speaker. What’s more, unusually for a combi product, it turns out that both parts of the 24PFS5231 package work impressively well – not bad for a TV that can be yours for just £199.

The 24PFS5231 certainly stands out from the portable TV crowd with its appealing matte-white finish and chunky, centrally positioned desktop stand/Bluetooth speaker.

Its build quality impresses too. The frame feels robust, the screen sits stably on the speaker stand, and you can achieve plenty of volume from the speaker without the cabinet rattling. Just bear in mind that the built-in Bluetooth speaker means that the 24PFS5231 can’t be hung on a wall.

The remote control is a cut above those usually found accompanying portable TVs. It sports a cute white finish to match the TV, it sits comfortably in the hand, and it prioritises key buttons in its layout features reasonably well. 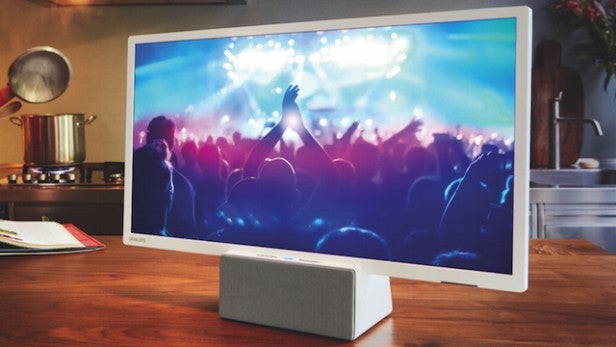 A lack of Ethernet/Wi-Fi support means you can’t access DLNA devices on your network, or any online video services such as Netflix, Amazon or Internet radio. While the 24PFS5231 may not be into Wi-Fi, it certainly digs Bluetooth. You can stream music into its speaker system from any Bluetooth-capable phone, tablet, or computer, and it’s possible to use the speaker for Bluetooth music without having the screen turned on.

Not surprisingly, the 24PFS5231’s TV section doesn’t support any fancy stuff such as 4K, HDR or 3D. Nor does it benefit from a particularly powerful video-processing engine by Philips standards. You still get sharpness, colour, and contrast boosters, though, as well as “normal” and MPEG noise-reduction systems. The only thing really conspicuous by its absence is any sort of motion processing.

Since the 24PFS5231 doesn’t boast one of Philips’ trademark heavy-duty video-processing engines, there are fewer settings than usual to worry with regards to its on-screen menus.

There are a few recommendations I’d make, however. First, turn off all noise-reduction systems when watching HD. Next, make sure you switch on the Game setting when using the 24PFS5231 as a gaming monitor.

Set the colour enhancement feature to “Medium” or even “Low”, and make sure the contrast is no higher than 86 or 87 in order to limit picture noise. Finally, turn off the Super Resolution feature to stop narrow edges and small areas of detail looking stressy.

The 24PFS5231 carries a long list of themed picture and sound presets, and it’s usually worth adjusting these to match the content you’re watching. The only exception is the Movie preset, which most viewers will likely find too dark. Personally, I preferred the Standard mode when watching Blu-rays. 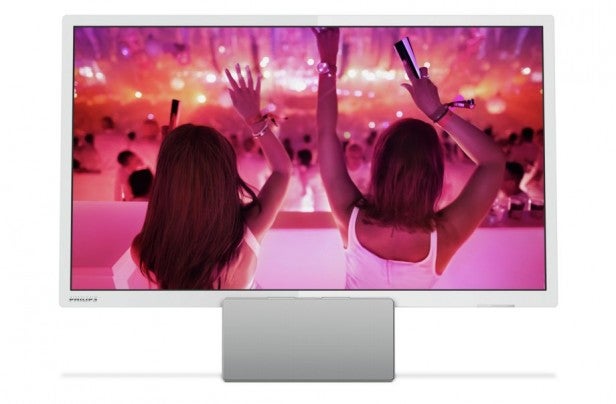 The 24PFS5231 outguns most of its portable rivals in almost every performance department.

Particularly striking on the picture side is its contrast, which sees some of the most convincing black levels experienced on a portable LCD TV share screen space with strikingly punchy whites and colours.

There’s only a faint trace of low-contrast greyness hanging over dark areas, and black parts of the picture aren’t infused with the sort of green or blue undertone that so often plagues small-screen TVs.

There’s also more subtle shadow detailing and dark colour information during dark scenes than you’d normally see on such a cheap and small TV, which in addition helps such scenes enjoy a more convincing sense of depth.

Black levels take a hit if you have to watch the TV from an angle of more than 25-30 degrees, but this is fairly typical with LCD TVs. Less typical is the impressive way the screen’s matte finish soaks up reflections. 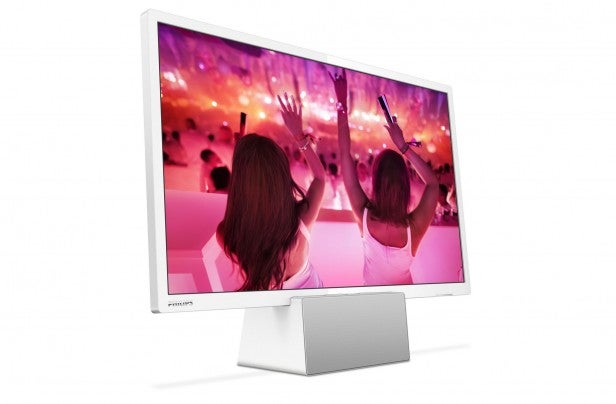 The 24PFS5231 is a cut above the budget norm with its colours, too, which look natural – so long as you avoid the highest “colour enhancement” setting. They also contain enough tonal subtlety to avoid plasticky skin tones and colour striping.

Relatively static HD sources are delivered with plenty of crispness and detail too, and while pictures aren’t spectacularly bright by small TV standards, the strong contrast and minimal reflections ensure they still enjoy plenty of dynamism.

However, there are a couple of flaws in the 24PFS5231’s picture make-up. The worst is motion blur. The screen seems to suffer with an unusually high response time, which leaves movement looking smeary and soft, and can even cause you to see momentary ghosts of a previous scene as the TV switches to a new one.

The other issue is a slight flickery, stressy look to areas of very fine detail – although if you don’t mind the picture looking less crisp, you can drastically reduce this problem by cutting the sharpness setting to two or less. 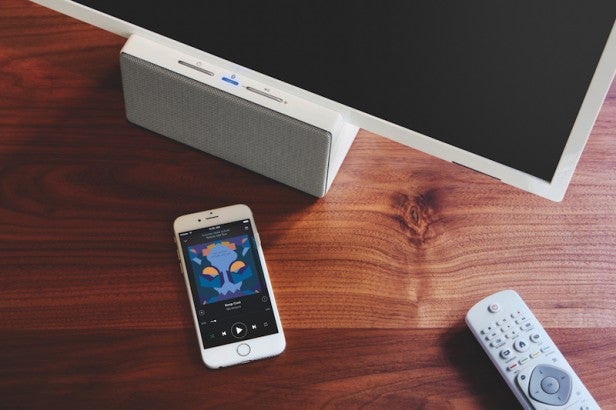 Even better, it really does sound pretty decent with Bluetooth music. The sound is clean, punchy, coherent, surprisingly free of harshness and distortions, and even projects well enough to satisfy quite large rooms. It’s flexibile, too, handling everything from Dinosaur Junior to Nick Cave, Daft Punk and Adele with equal aplomb.

Gamers will be happy to hear that the 24PFS5231 turned in a highly respectable average input lag measurement of 26ms when using its Game picture preset. The results were a little inconsistent, though, often getting as low as 6ms but occasionally ballooning to 50ms. Also, the TV’s problems with motion blur can be pretty noticeable when you’re panning swiftly round a first-person shooter.

The 24PFS5231 is one of the most compelling small-screen TVs around. Precious few rivals can match it for picture quality, while the concept of building in a reasonably effective Bluetooth music speaker is a stroke of genius.

The lack of Wi-Fi support and smart features beyond the Bluetooth connectivity will be an issue for some, but if you can see past that then this is a really ideal multi-purpose TV and audio solution worthy of consideration for any kitchen, study, bedroom or conservatory.

Unlike many combi products, neither part of the 24FPS5231’s dual functionality feels painfully compromised, making it a uniquely effective (albeit not entirely flawless) second-room AV solution.