A fun way to keep an eye on your pets, if you've got cats that love chasing a laser, you can play with them remotely, using the camera to make sure that they're well while you're out. The camera is quick to connect to but you only get basic viewing options unless you upgrade to an expensive cloud product to add online recording, too. Relatively expensive to buy, this is a neat toy but one that many people might find hard to justify.

While most pet cameras are largely aimed at dogs first, the Petcube Play 2 camera with its integrated laser pointer is clearly designed for cats first, although some canines may enjoy playing with it too.

It’s a fun way to keep your cats engaged while you’re away but the high price and subscription services to make the most of the camera may put keep this camera off many people’s wishlists.

Petcube Play 2 – What you need to know

A relatively small cuboid (90 X 81 X 90mm), the Petcube Play 2 looks a little like a mini projector, rather than a pet camera. It’s designed to sit on the floor or a shelf, both giving you a way of keeping an eye on your pets, as well as having a laser pointer to give your pets a game of chase. 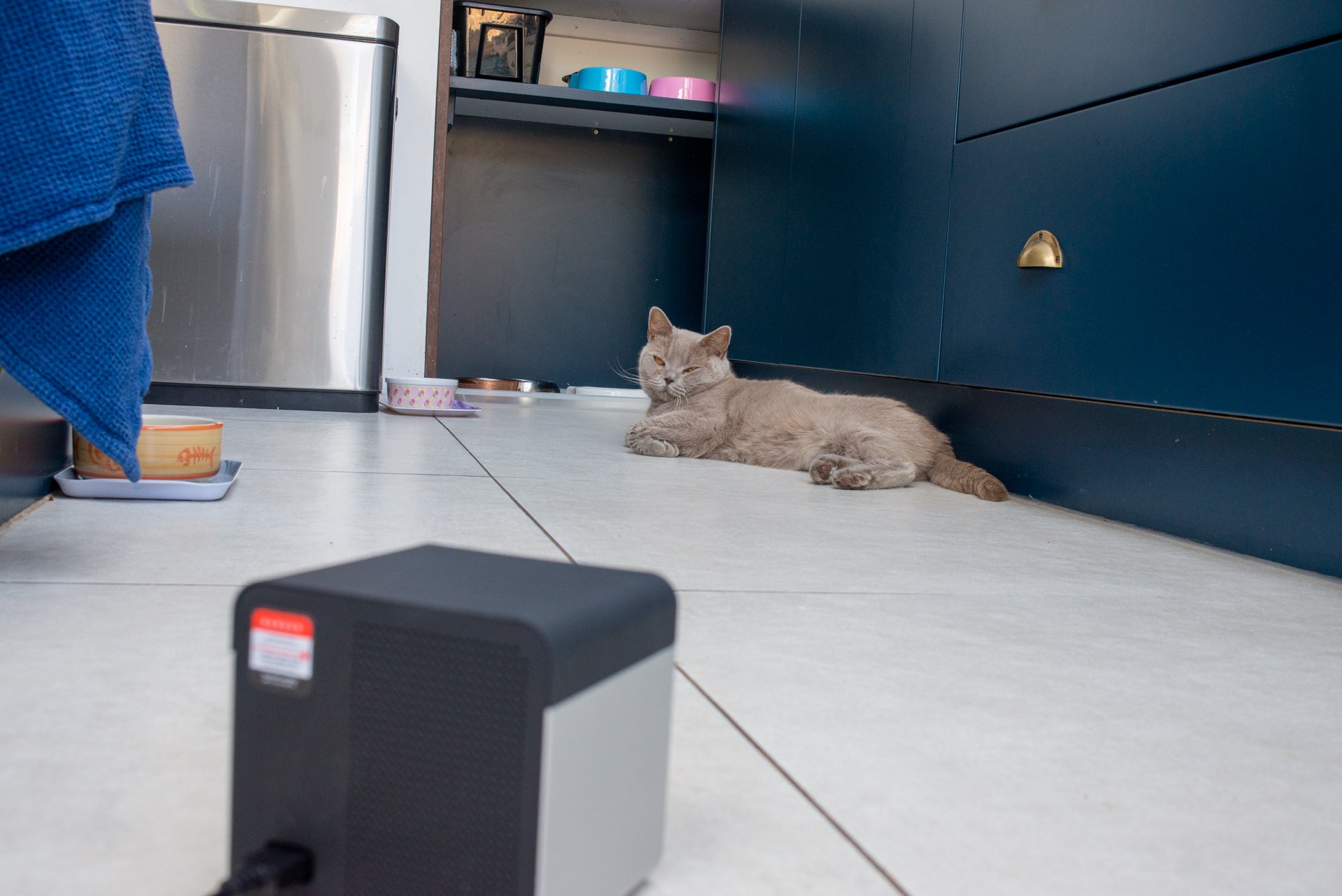 Once plugged in via USB-C (there’s a 2m cable in the box), you can join the camera to your wireless network using the Petcube app, and you’re ready to go.

At its most basic, the Petcube Play 2 simply lets you join the camera’s feed to see what’s going on in your home. Connections are generally fast to make, with the camera playing an alert sound to let people (and pets) know that they’re being watched. Using the two-way talk, you can have a conversation with your pets, too.

At this point, you can choose to record what you see, but the camera will not automatically record anything unless you upgrade to a subscription. With the Optimal package ($5.99 a month or $47.88 per year), you get 10 video downloads per month, three-days of video history and smart alerts (the camera can spot people and pets, and distinguish meows and barks). 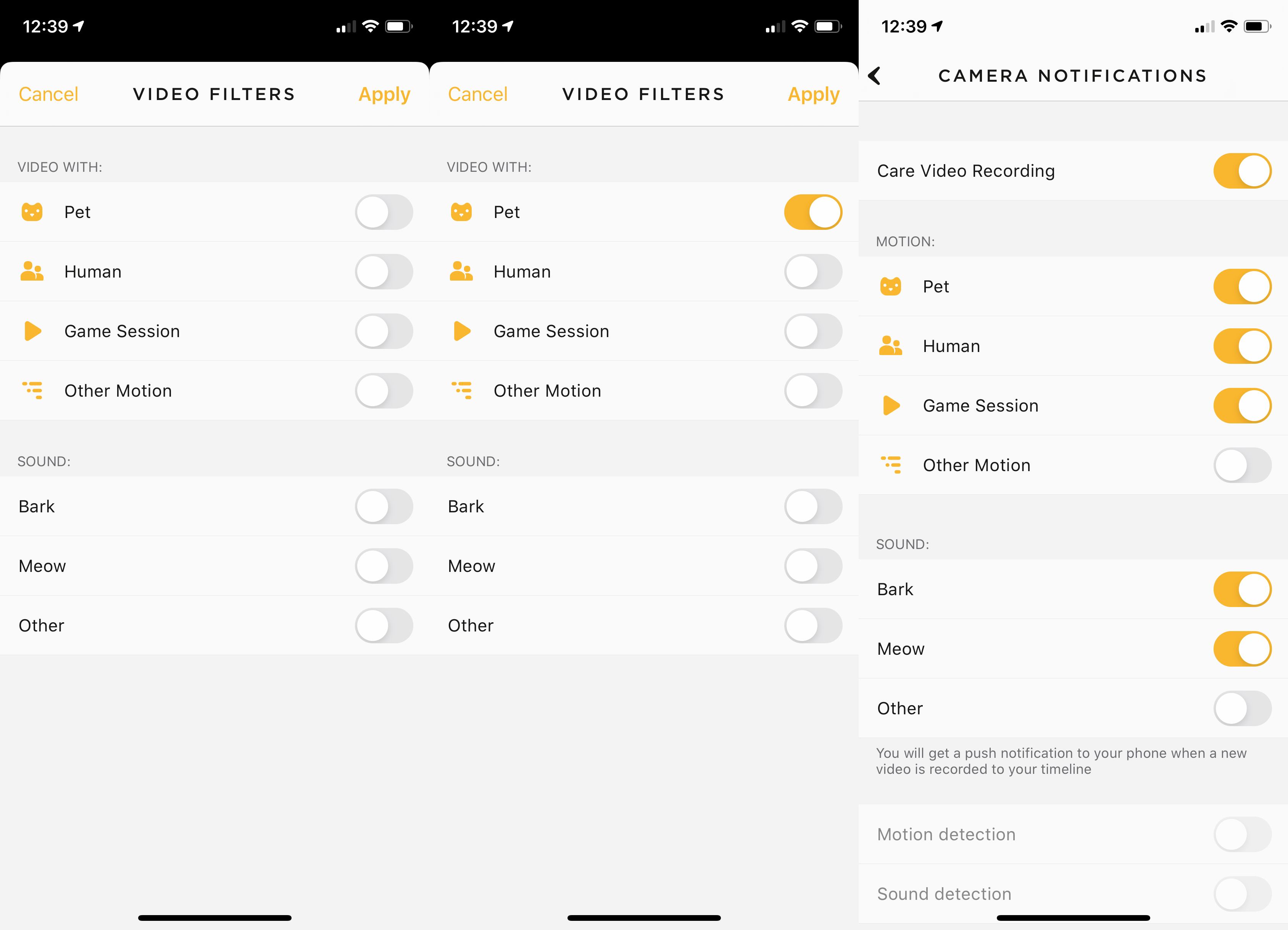 Upgrade to Premium ($14.99 a month or $99 a year) and you get coverage for all of your cameras, 90-days of video history and unlimited downloads. Both packages net you some additional petcare extras, although these are limited to the US. You also don’t get more advanced security features, such as activity zones to only monitor the areas of the video feed that you’re interested in.

Given what you get, subscription options are hugely expensive compared to those with traditional security cameras, so I recommend only subscribing when you’re going to be away for a while.

Once you’re viewing the camera’s feed, you can drag your finger around the screen to move where the laser pointer is. It’s far from accurate, so you first need to see the pointer on-screen, and then shift your finger around to engage your pets. Pointer movement is rather jerky, although this didn’t have much impact on enjoyment: my cats love chasing a laser pointer, so the Petcube Play 2 is a great way of keeping some kind of contact with them while away. 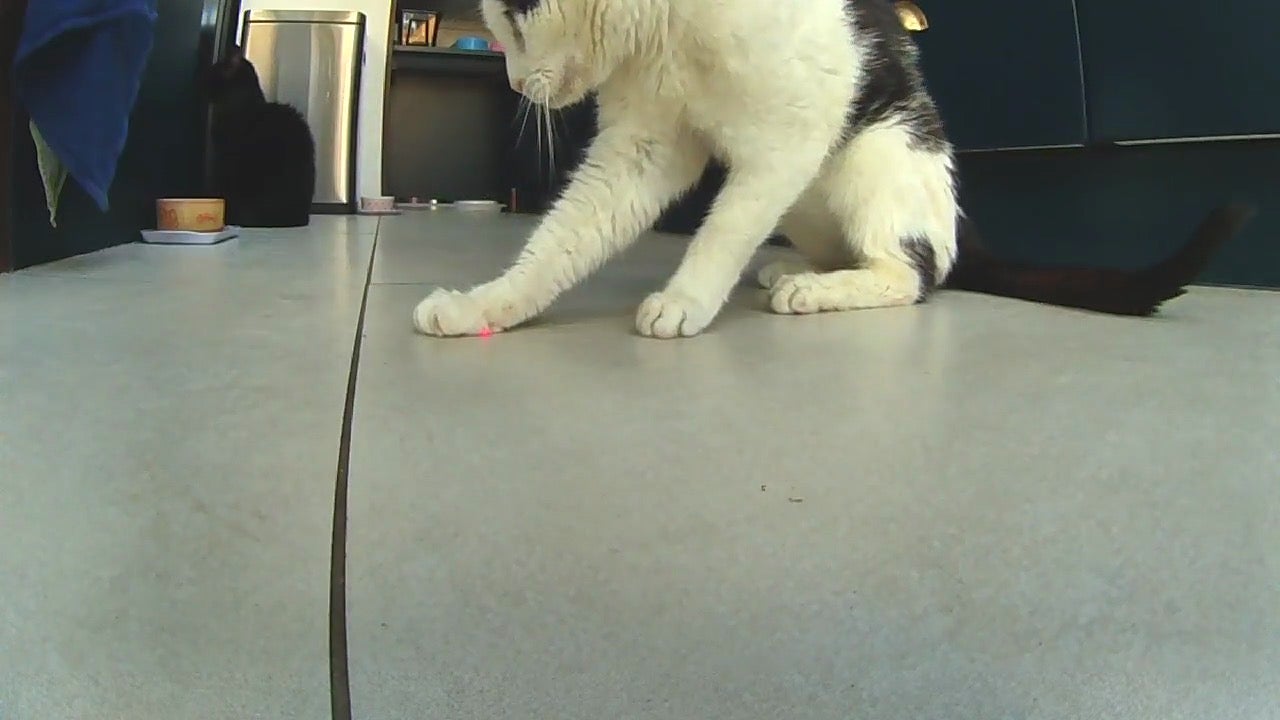 The laser is relatively bright, although direct sunlight through a window can make it very hard to see the pointer; a cloudy day, indirect sunlight or night work better with this product. 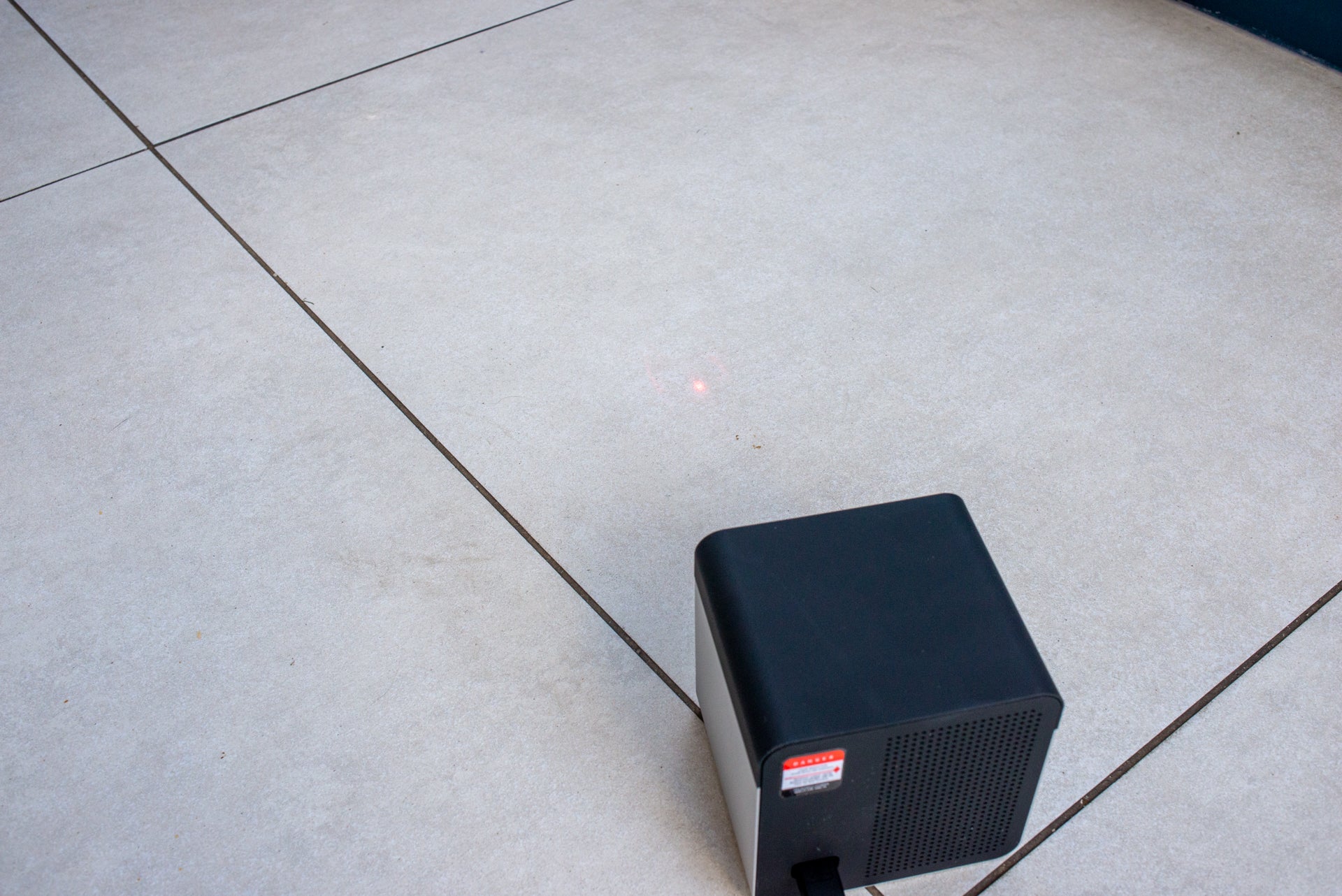 New to the Petcube Play 2 is Amazon Alexa support, turning the camera into a smart speaker. As with other third-party devices, you don’t get full Alexa support and can’t make voice calls and you can’t group the speaker, either. Given the slightly weedy speaker, it’s only really good enough for voice replies, rather than music. Still, as a way of adding a bit of extra voice control around the home, it’s nice to have the option.

Finally, you get a free one-off text chat with a vet to get advice on any issue. However, the service is US-based, so only comes online later in the day here in the UK; once your free chat is done, it makes sense to use a local vet for future support.

There’s a 1080p sensor built-in with a wide-angle 160-degree lens that captures most of a room. Although there’s Full HD support, my camera defaulted to 720p video and wouldn’t switch back to the higher-resolution video, which is a shame.

Video quality is alright, but a bit soft with detailed missing from the image during the day, while night vision in black and white made the image even softer. There’s enough detail to see what your pets are up to but a regular security camera will likely give you better results overall. 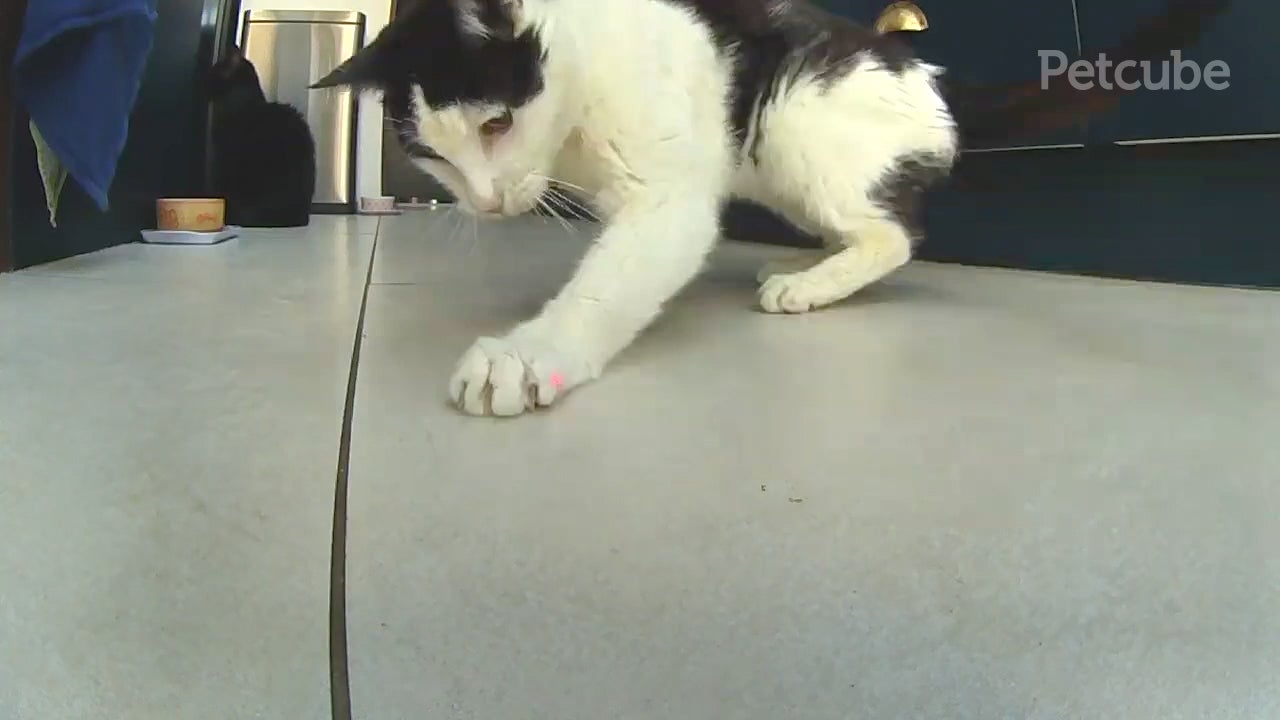 Should you buy the Petcube Play 2?

There’s a great amount of fun to be had playing with your cats from anywhere else in the world, as well as checking in to see if they’re doing alright. The main issue is that the camera costs $199 (it’s only currently available in the US) and the cloud subscription to add more features is relatively expensive.

Throw in the so-so video quality, and the Petcube Play 2 is only for those really dedicated to their pets. If you want a camera to keep an eye on your home and give you proper security, I’d look for a dedicated model instead, which will be far cheaper.