Since it introduced the Optio 330 in 2001, the first camera in the Optio seies, Pentax’s compact camera output has been restricted almost exclusively to 3x zoom models, with the range extending to over forty different models over the last six years. It has flirted occasionally with 5x zoom models, but the last of those was the Optio SVi launched over two years ago. Bearing this in mind, the announcement last month of the new Optio Z10 came as something of a surprise, because it is equipped with an all-new non-protruding 7x zoom lens, as well as an 8.0-megapixel sensor and 2.5-in 230k wide-view monitor. I’ve got one of the first production samples, so hopefully this should be the first full review in the UK. 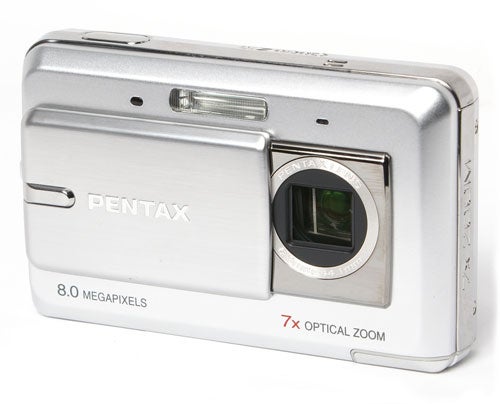 The first impression of the new camera is certainly favourable. Like most of Pentax’s compacts it has an all-metal aluminium body, and is available in black or the silver version I have here. The overall design bears a superficial resemblance to the Casio EX-V7, with a sliding lens cover that doubles as the on/off switch. As with the Casio, the 7x zoom lens is mounted sideways inside the camera, looking out via a prism. This means that it doesn’t protrude from the front, while allowing the camera to have a relatively slim profile. It measures 94 x 58 x 25.5mm, which while not the slimmest camera in the world is still comfortably into ultra-compact territory and definitely pocketable. It weighs 145g including the battery and memory card, which is pretty light even by ultra-compact camera standards. 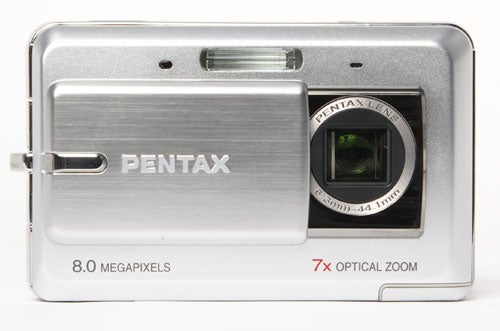 As usual with Pentax cameras, the build quality of the body is very good and the design is simple and straightforward. With the lens cover open the camera is easy to grip, with plenty of room on the back for your thumb. I will admit that I’ve never been a fan of sliding-cover cameras for several reasons. The covers can come open in your pocket, draining the battery and leaving the lens exposed, and the sliding electrical contacts can be vulnerable to dirt and wear, which can lead to long-term unreliability. The lens cover on the Z10 is fairly typical of the breed; it is spring-loaded so it stays shut, but at the same time slides open quite easily. It is made of metal and is reasonably strong, but when open it does feel a bit loose and I wouldn’t want to vouch for its durability.

The control layout is very similar to most of Pentax’s other compact cameras, with just the multi-function D-pad and three other buttons, including the usual green button, which puts the camera instantly into a fully-automatic “idiot mode”, useful as a panic button for inexperienced users. The zoom control is a simple rocker switch, and is at least quite large and easy to use, but the zoom action s stepped with 16 increments between wide and telephoto, and the control is not terribly sensitive, which makes accurate framing a bit of a pain. Most of the basic shooting functions are found on the D-pad, including a two-speed self timer, high-speed and normal continuous mode, multiple focus modes including manual focus, infinity, macro and pan-focus, and of course the usual selection of flash modes. The bottom button of the D-pad opens up the Mode menu, with fifteen programs for things like landscapes, flowers, natural skin tone, surf and snow, kids, pets, food and of course the risible frame composite mode. 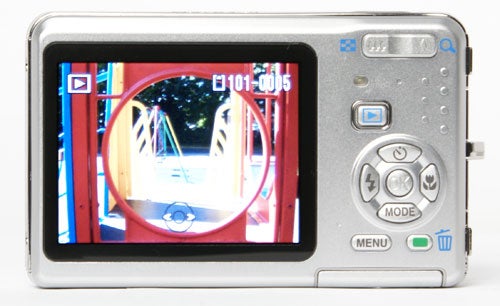 There is also the Digital SR mode. SR stands for shake reduction, but in fact this is a bit of a misnomer, since the Z10 has no image stabilisation of any kind. Instead, the SR mode simply activates auto-ISO mode, with a maximum sensitivity of ISO 3200 and all the image quality problems that entails. It does have a shake reduction mode in playback, which processes images to further reduce the effects of camera shake, but the results were not terribly impressive. I have to say that a 7x-zoom camera with no active image stabilisation is at a bit of a disadvantage in today’s market. Other compact cameras such as the aforementioned 7x zoom Casio EX-V7 (£140), the 10x zoom Panasonic TZ2 (£175) and the 7.1x, 28-200mm Ricoh Caplio R6 (£160) all have mechanical image stabilisation, but the Optio Z10 does not, despite its launch price of £170. Even if it is heavily discounted by online retailers right away, it is going to have a hard time competing with other more sophisticated cameras, such as the Panasonic TZ3, Casio EX-V8 and Ricoh R7. 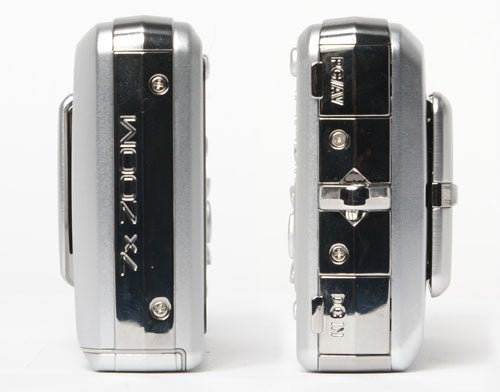 The Z10 does have some useful features however, including adjustable sharpness, contrast and saturation, three metering modes and two AF modes. There is some fun stuff available in playback mode too, including red-eye reduction and digital filter effects. The built in flash is pretty decent too, with a wide-angle range of 5.4 metres and excellent frame coverage. The video mode is also competent, with 640 x 480 resolution and 30 frames per second and mono audio, although unlike some other recent long-zoom cameras the zoom lens cannot be used while filming.

Overall performance is adequate, but not exactly spectacular. The camera starts up quickly enough in a little over two seconds, and in single shot mode it can take a shot every three seconds, which is about average for a camera of this type. There are two continuous shooting modes, a standard mode in which the camera averages about a shot every two seconds, and a faster burst mode in which is shoots four shots in just under two seconds, but only in 3MP mode. Pentax has been using the same 740mAh battery in most of its compacts for years, but the Z10 is powered by a new battery which looks very different. It has only 700mAh capacity, which causes me some concern regarding battery life. The stated maximum is only 210 shots on a full charge, and I found that the battery indicator was down to two bars after just 60 shots.

Of course the crucial factor for any camera, especially one with a radical new lens, is image quality, and here the verdict is, I’m afraid, not good. The lens lacks sharpness and fine detail, as well as producing significan distortion at wide angle, and the tiny 1/2.5-in sensor lacks dynamic range and colour depth. As well as this there are severe image noise problems at all ISO settings from 100 upwards. The Z10 has a maximum ISO setting of 3200 but I have no idea why, since images at this setting are so noisy as to be utterly useless. There are some good points however; while the focusing is a little slow it is at least reliable, and exposure and colour reproduction are excellent. In good light and low ISO settings the Z10 is capable of turning in some very good photos. 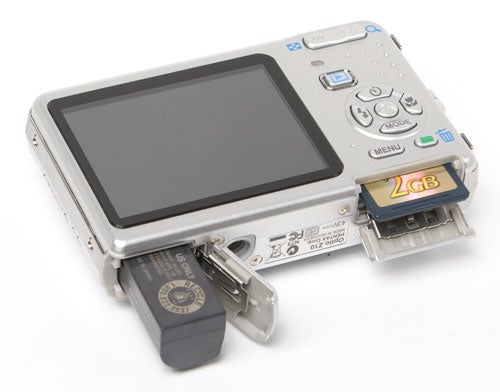 The Pentax Optio Z10 is a bit of a departure for a company that has specialised in 3x zoom compacts for several years. Build quality and design are good, and general performance is adequate, but image quality issues and the lack of any image stabilisation limit its usefulness, and it looks rather weak compared to several competing models. 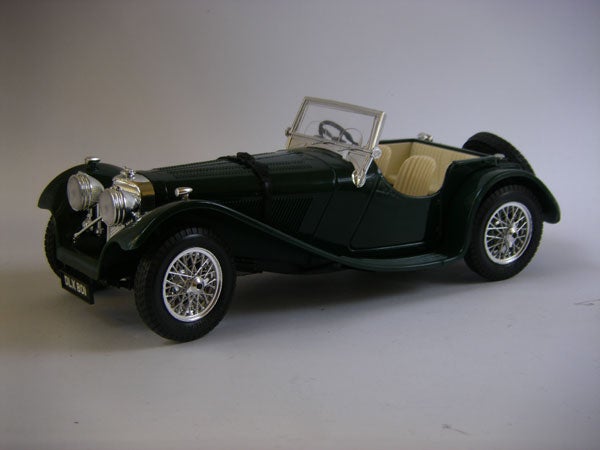 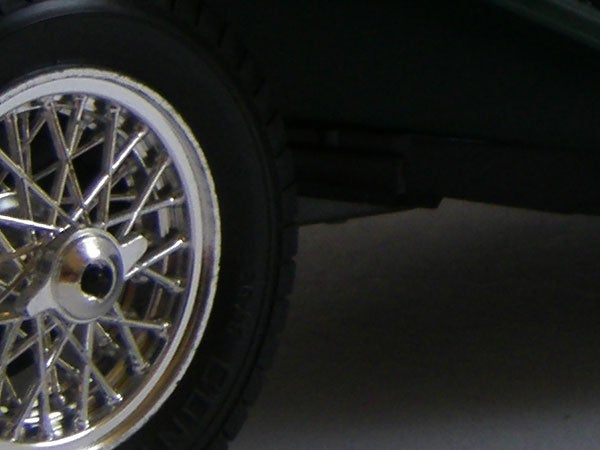 At the minimum 64 ISO the image quality is quite good. 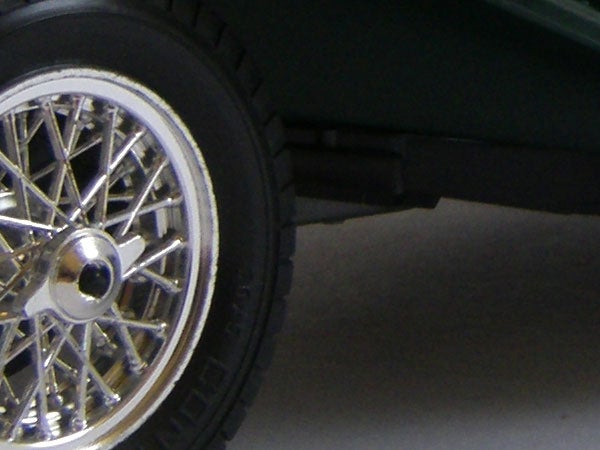 At just ISO 100 however there is some sign of image noise. 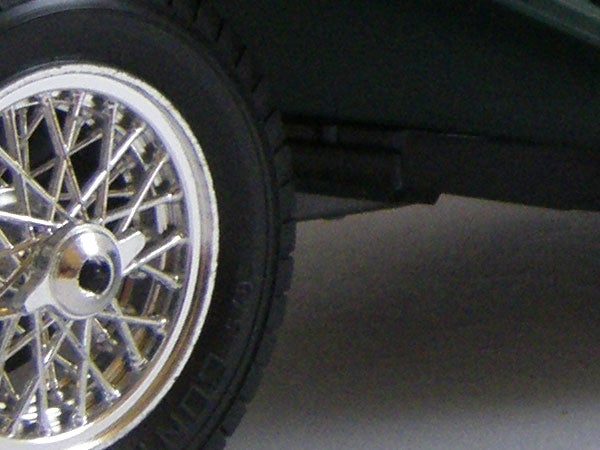 Slightly more noise at ISO 200, with colour mottling in the lighter areas. 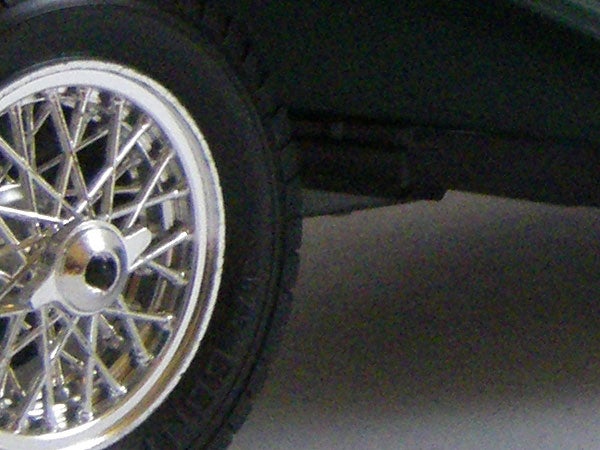 At ISO 400 there is visible noise right across the image. 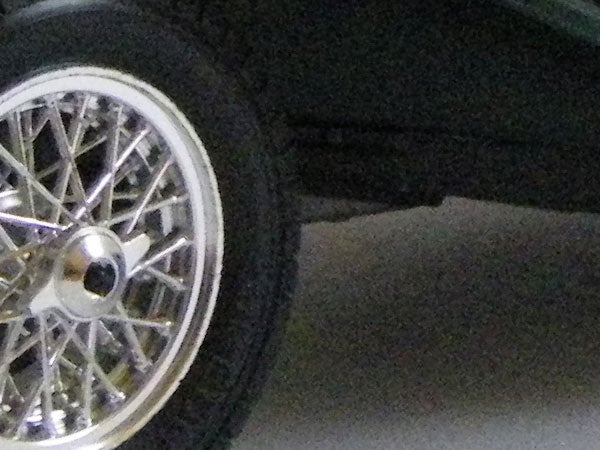 At ISO 800 there appears to be less colour noise, but only because it is overwhelmed by the luminance noise and loss of saturation. 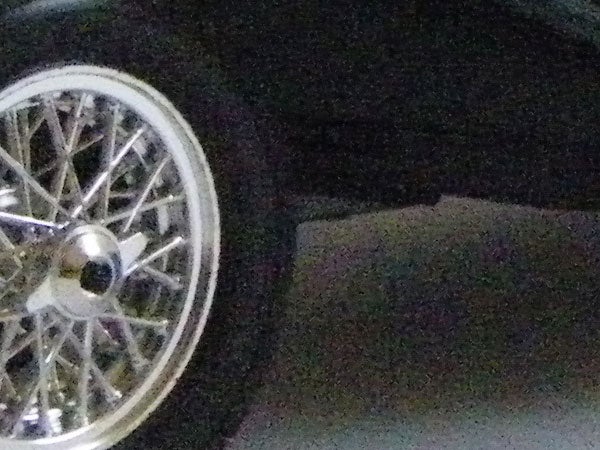 Both chromatic and luminance noise at ISO 1600. 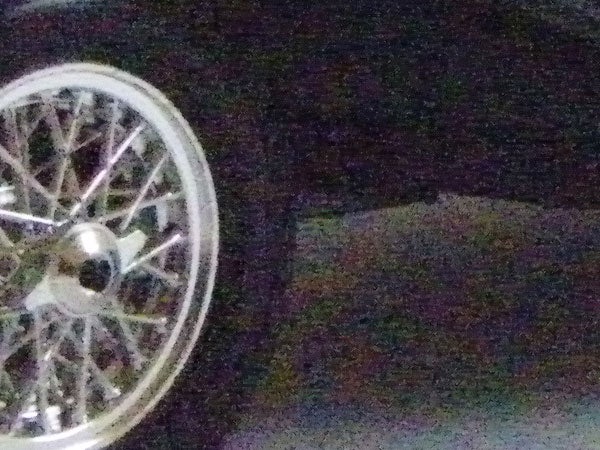 Why bother having an ISO 3200 setting when the image quality is this poor? 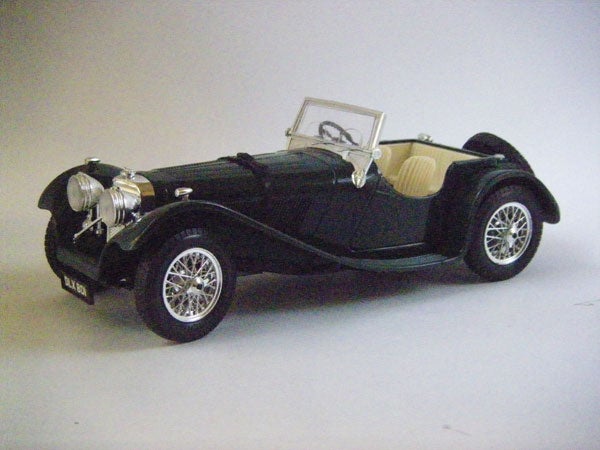 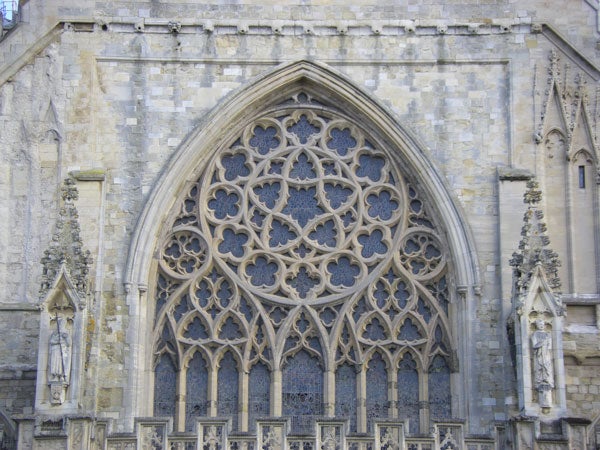 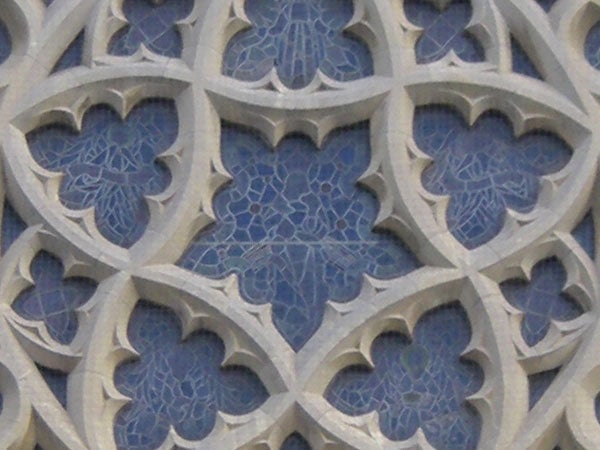 The level of detail is very poor for an 8MP camera. 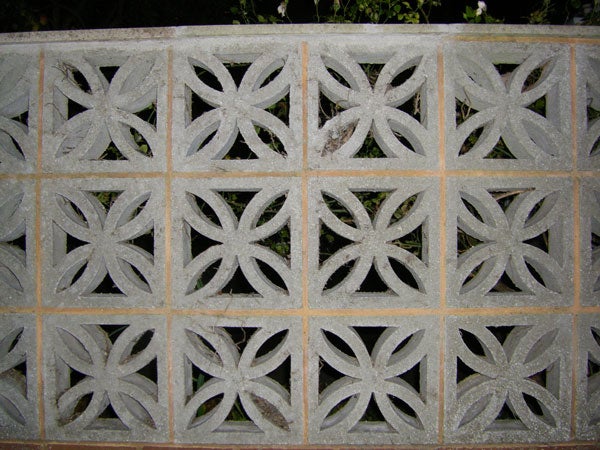 The unusual lens produces a lot of barrel distortion at wide angle, but at least the flash coverage is good. 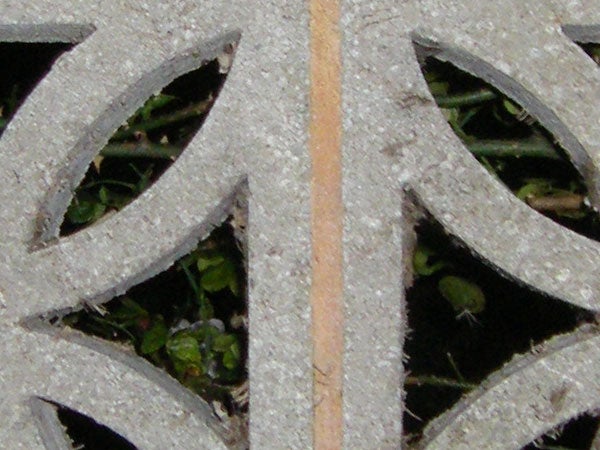 None too sharp in the centre of the frame. 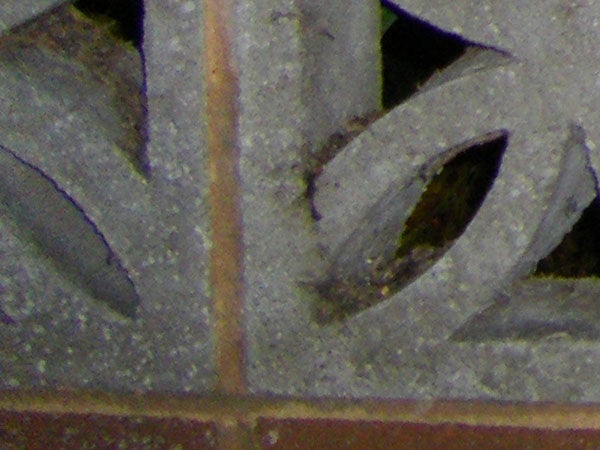 Even less sharp at the edge of the frame, and some chromatic aberration too. 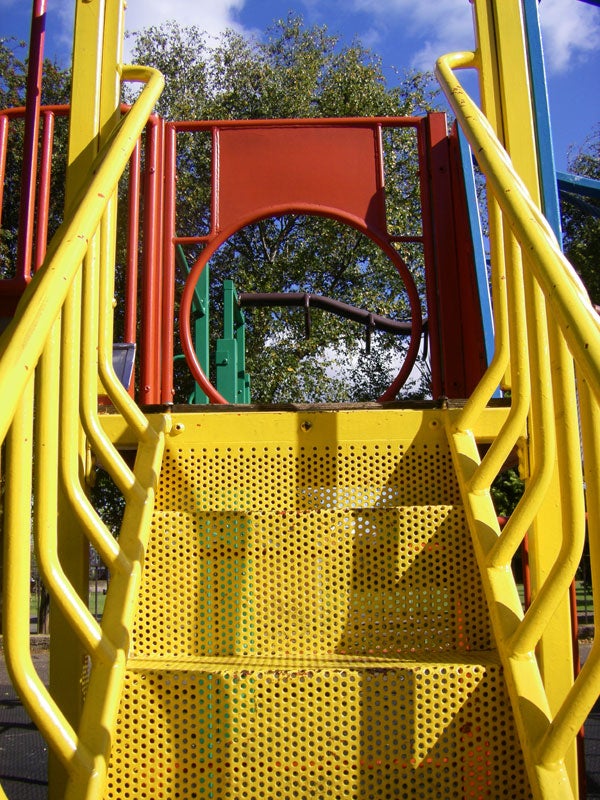 At ISO 64 in good light the Z10 is capable of producing good pictures, with excellent colour and exposure. 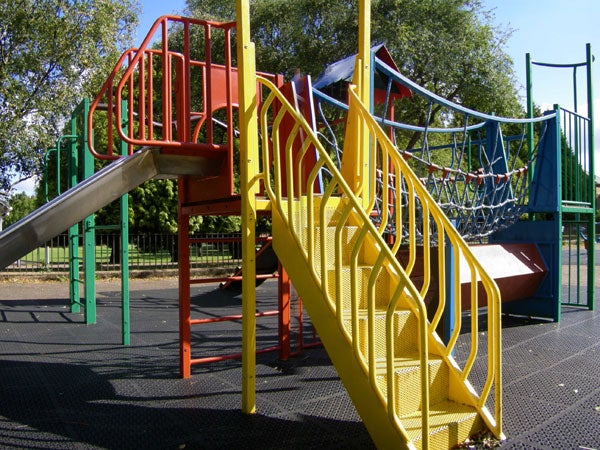 The Z10 has an interesting “digital wide” mode, which works like panorama stitching, adding two consecutive shots to produce a wide-angle scene equivalent to 28mm, however the joins may no be precise. 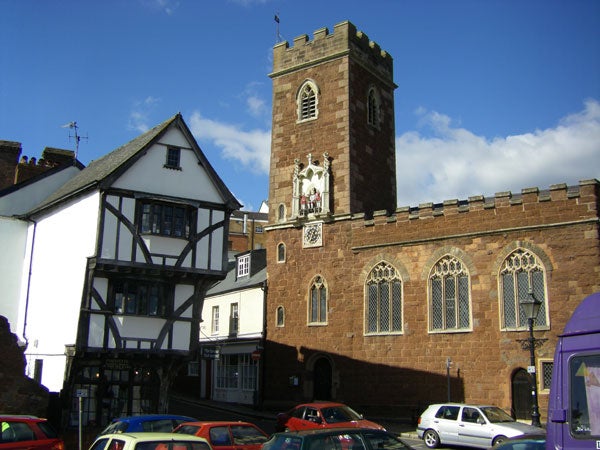 The wide angle end is equivalent to 38mm, not really wide enough for panoramic shots. 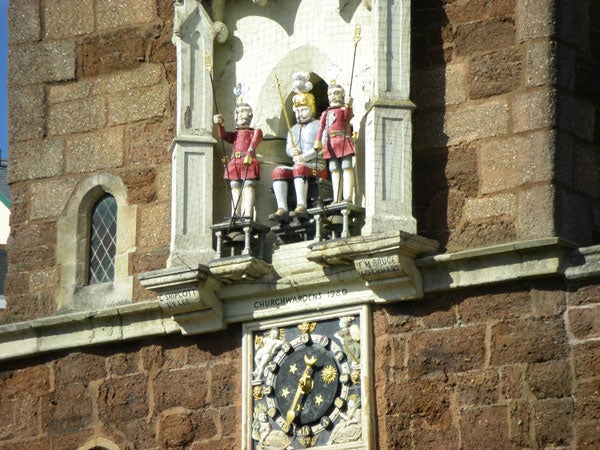 The telephoto end is equivalent to 266mm, great for picking out details.