You know, I think Pentax’s UK marketing department might be trying to kill me, but they’re going to make it look like an accident. This is the second year in a row that Pentax has launched a camera that can take photographs underwater, and once again my review sample has been sent in the middle of winter. Pentax knows that I’d get into a lot of trouble if I tried taking pictures in my local swimming bath, so the only way I can get any underwater sample shots is to risk an extremely unpleasant death from hypothermia and frostbite by braving the near-zero water temperatures in a river or the sea. As murder plots go, it’s both fiendish and almost foolproof. 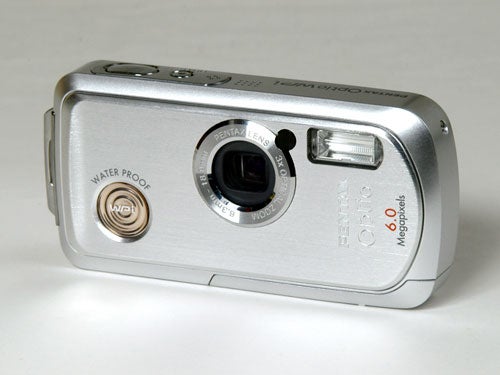 The Optio WPi is of course based on the popular Optio WP launched about this time last year. Jalal reviewed it here in April 2005 and gave it very high marks. I reviewed it for a certain well-known camera magazine and was also most impressed by it. The new WPi adds an extra megapixel to the existing formula, resulting in a 6MP compact with a 3x optical non-extending zoom lens and a 2in LCD monitor – and let’s not forget that it can also take photos at up to 1.5 metres underwater. It manages to do all this while still being one of the slimmest and most stylish digital cameras on the market. It is available for a high street price of £269.99, or for as little as £171 if you shop around online. 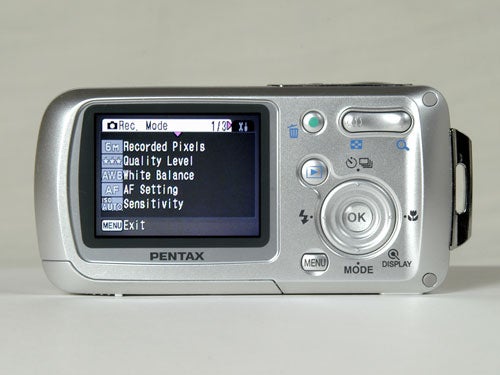 The WPi is designed as a go-anywhere camera for outdoor activities such as skiing, surfing, or even snorkeling, and has been designed to survive in extreme conditions. It is basically a ruggedised version of the lovely Optio S6 compact, sharing the same sensor, exposure system and software. It has a strong but light aluminium body with rounded and beveled corners for strength, with a profile only a couple of millimeters thicker and taller, and actually slightly shorter, than the S6. The non-extending, internal focusing lens is protected behind a scratch-resistant glass cover, and all the controls and external protrusions are recessed or smoothly rounded, leaving nothing to get snapped off or snag on pocket linings. The LCD monitor also has a scratch-resistant cover and the battery/card hatch has a locking catch so it doesn’t open accidentally while submerged. 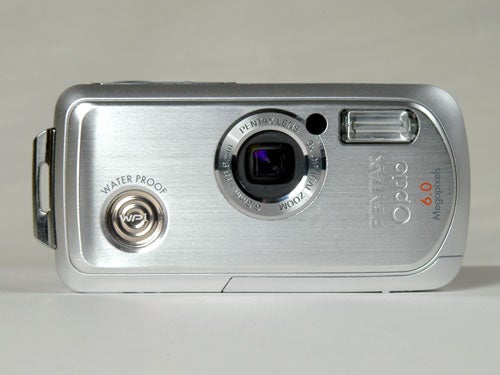 The controls are nicely laid out, and are broadly similar to those on Pentax’s more mainstream compacts, including the idiot-proof Green Mode button. Most common options such as flash mode, self-timer, drive mode and macro mode are accessed as secondary functions on the D-pad, as are the shooting mode options. These include the usual portrait, night scene, landscape, sports and beach/snow modes, but also include flowers, candlelight, kids, pets, soft focus and an underwater mode. Yet more are available via a customisable menu. Also on the same menu is the movie mode and sound recording. Pressing the green button in this menu brings up a handy note explaining each function for beginners.


The controls on the WPi are a little stiff and clunky, but they have to be to withstand water ingress under pressure. They have a distinct ‘click’ when operated, which is useful if you’re using the camera with gloves or very cold fingers. 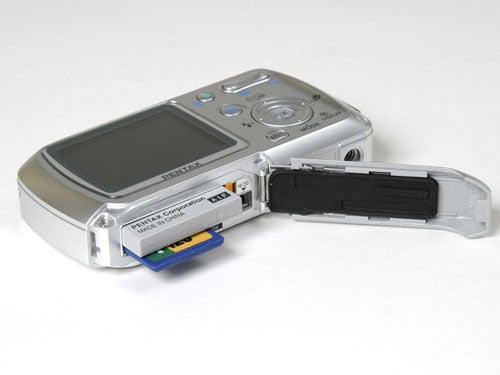 I have previously criticized some Pentax compacts for having rather slow performance and especially start-up time, but the WP was an exception to that rule. With new faster software the WPi is no slouch either, starting up in just under three seconds. It’s shot-to-shot times in continuous drive mode are quite good at one full-resolution frame per second for 6 frames in standard mode, while in high-speed mode it shoots 10 frames in a little over two seconds, but in this mode it is limited to 1,280 x 960 pixel resolution, or about 1.2MP. Write-to-card times are about average for a camera in this class. 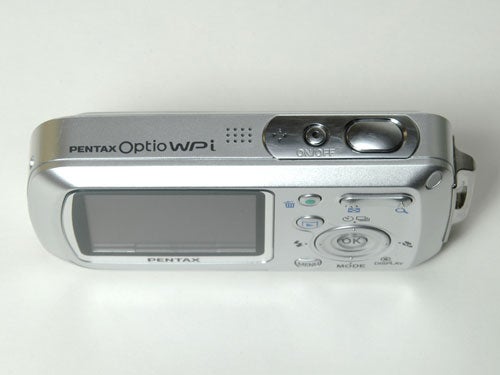 The 9-point AF system is not the fastest I’ve ever seen, but it is certainly one of the best for low-light performance. In fact the WPi focuses more quickly, accurately and reliably in lower light than some cameras that are equipped with AF illuminators, a feature which the Pentax lacks. For low light photography the built-in flash has a range of 3.1 metres at wide angle or 2.5 metres at full zoom.

In order to keep the number of potential water ingress points to a minimum, the DC power input and USB connectors are concealed under the locking battery/card hatch, which has a waterproof rubber seal. It comes supplied with a separate battery charger, and uses the same D-LI8 3.7V 710mAh lithium-ion battery as all of the other compacts in Pentax’s range, so if you already own a Pentax the batteries are interchangeable. The D-LI8 isn’t a particularly large battery, and I found that by the end of a long day’s shooting it was down to one bar and in need of a recharge. If you’re taking the WPi on holiday even for a weekend, don’t forget the charger.

With the WPi performing generally well, the movie mode is a bit of a let-down. It is only capable of shooting at 320 x 240 pixel resolution at 30 frames per second with sound, a rather sub-par performance when compared to recent compacts from other leading manufacturers. It does however offer some movie editing options in playback mode, as well as options for still images including colour filters, adjustable brightness, red-eye removal, resizing, and some truly heinous frames that can be added to your pictures, including a lace-trimmed heart shape. Lovely.


At the risk of damning with faint praise, in terms of image quality, the WPi isn’t bad. I’ve seen 6MP compacts that are considerably better, but I’ve also seen a lot worse. As I already mentioned, focusing while not quick is reliably accurate, and metering is also generally good under most conditions, although some shots were slightly over-exposed. Colour reproduction was also generally good, although reds did seem to be a little under-saturated to my eye. I also felt that images lacked a certain fine detail, and showed slight artefacts in some areas. Image noise at higher ISO settings was also quite bad. The WPi does offer adjustable contrast, saturation and sharpness, so perhaps a little experimentation with these settings can produce a more pleasing result. 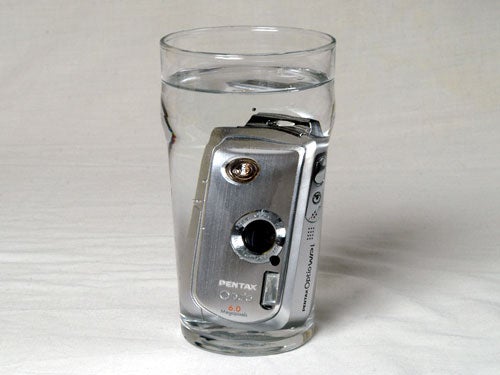 On the whole though, not a bad performance. The Pentax Optio WPi is the only fully waterproof 6MP compact on the market, and it is ideal for any sort of outdoor activity short of serious SCUBA diving. It is also an ideal social camera for its sheer indestructibility and excellent low-light performance, plus if some idiot spills beer all over it you can just rinse it off under a tap.


If you have a camera-killing lifestyle but enjoy taking pictures, then the WPi is the ideal solution. It is well made, looks superb, handles well, has reasonably good image quality and can survive and take pictures in conditions that would destroy any other camera. There’s nothing else on the market like it. 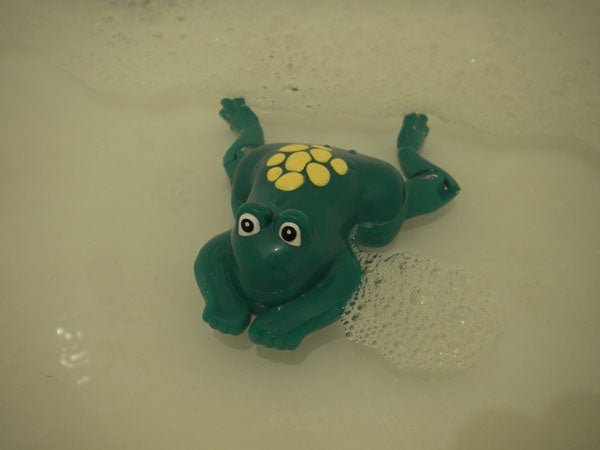 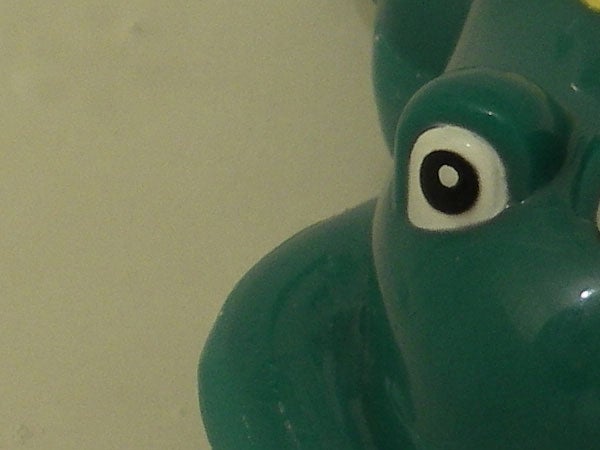 1/6th sec at f3.3. At the minimum ISO setting of 50, there is no real image noise and colours are smooth and even. 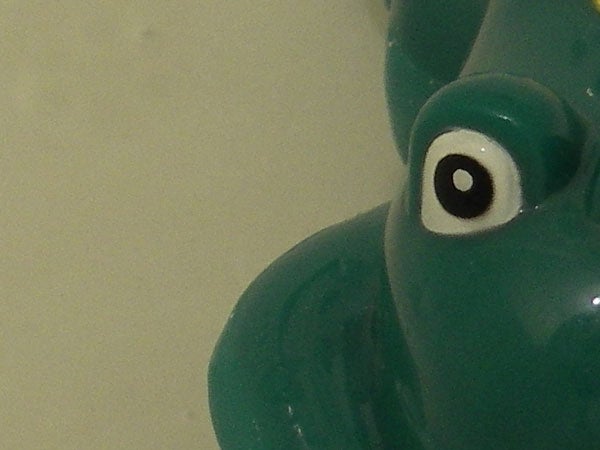 1/8th sec at f3.3. At 100 ISO the colours are fractionally less smooth, but there is still no real image noise. 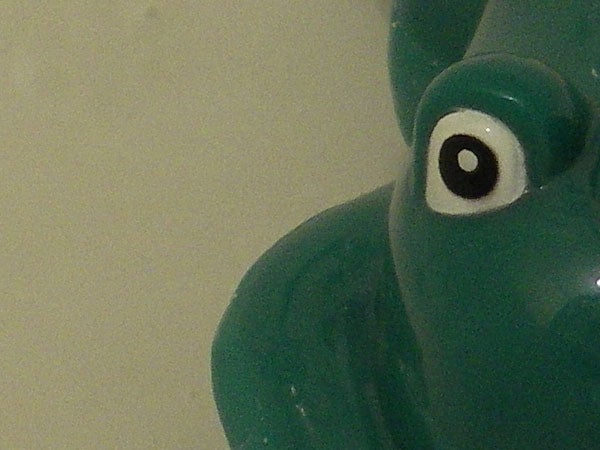 1/15th at f3.3. At 200 ISO there is now image noise visible, but colours are still fairly smooth, although under-saturated. 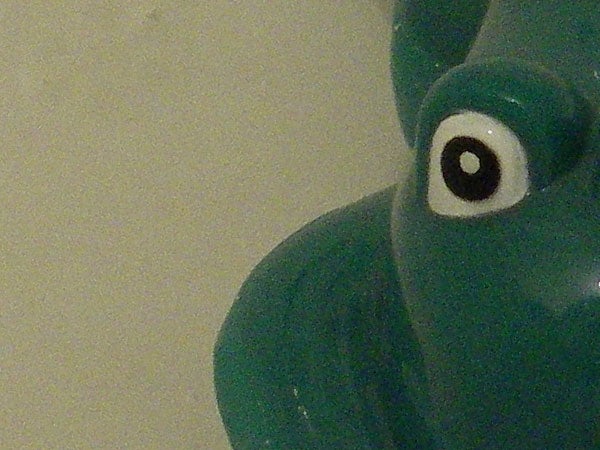 1/30th sec at f3.3. At 400 ISO there is a good deal of image noise and colour speckling, but it is fairly even and the image is not completely ruined. 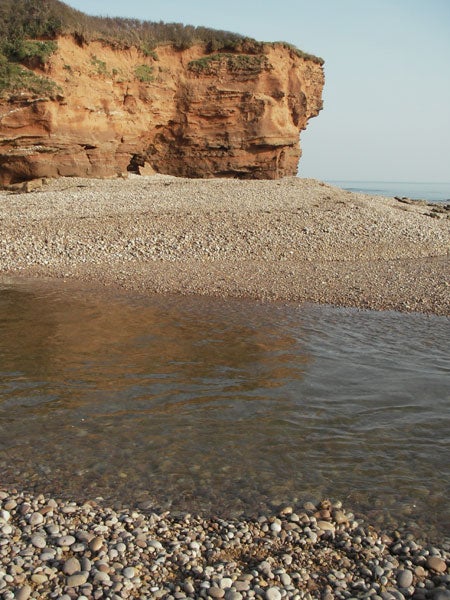 In order to test the Optio WPi, I’ll need some water. Ah look, there’s some over there. It’s the river Otter. 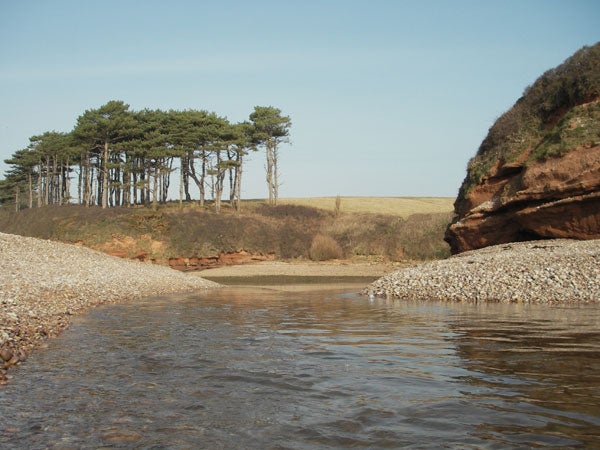 Oh yes, doesn’t that look inviting? There’s a lot of detail in this shot, but the colours are a little muted. 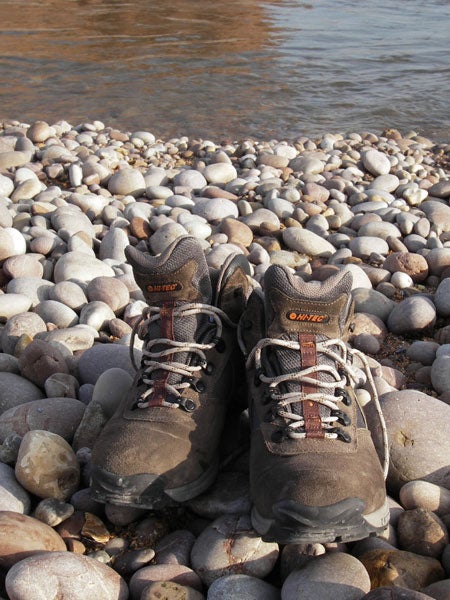 OK, boots off, I’m going in. Note how the 9-point AF system has correctly locked onto the boots in the foreground, while the background is blurred. Nice. 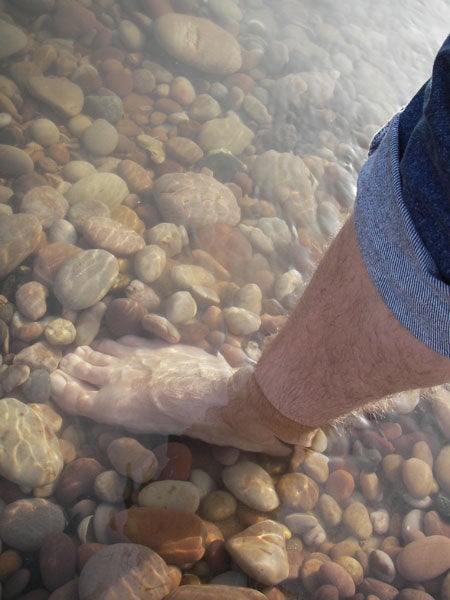 AAAARGH! %*$£@# that’s not water! It’s liquid helium! I can’t feel my feet! Note however the excellent detail on my disgustingly hairy legs and the blue colouration of my toes. 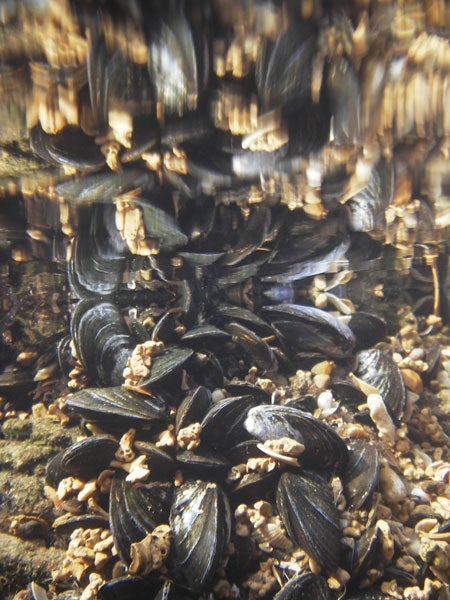 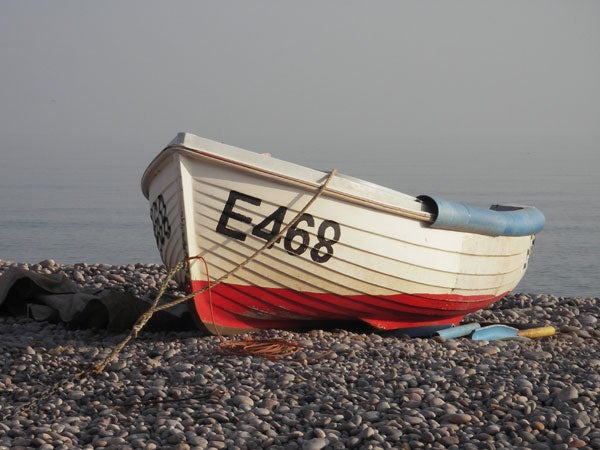 Back on dry land, the Optio WPi is no slouch either. The exposure and colour rendition in this shot are excellent. 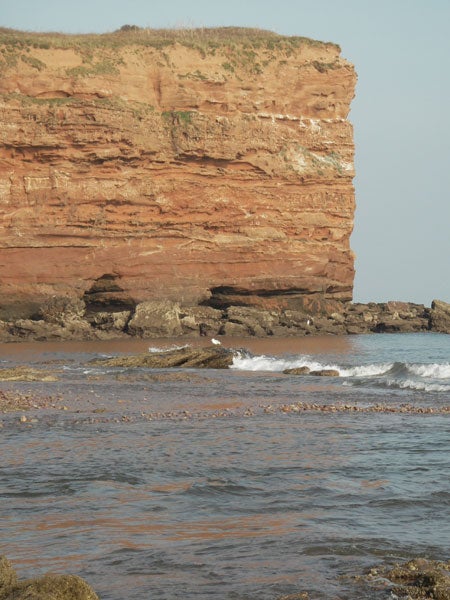 The 3x optical zoom doesn’t allow for much in the way of telephoto shots, but it does help with compositions.