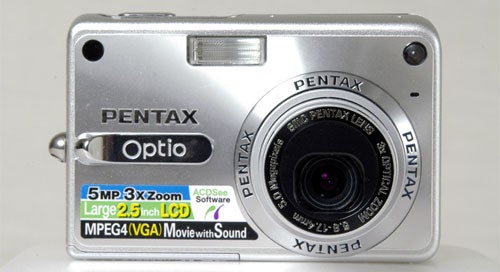 It is getting increasingly difficult to know what to write about Pentax’s ever-expanding line of five megapixel compacts. The range now consists of no less than nine models, all very similar in both specification and appearance. The new S5z joins the S5n, S5i, SV, SVi, S50, 50, and S55, as well as the Optio WP and Optio X, all of which sport 5MP sensors and either 3x or 5x optical zoom lenses, and range in price from around £112 to just over £200. Only detail differences in such things as LCD monitor size, battery type and a few special features differentiate most of these cameras. Pentax leads the market in ultra-compact digital cameras so one has to assume that it knows what it’s doing, but it certainly doesn’t make the reviewer’s job particularly easy.


In the case of the £198 Optio S5z, the main feature distinguishing it from the virtually identical S5n is its big 2.5in monitor. To accommodate such a big screen on such a small camera the case has been partially redesigned and is 3mm taller and 1mm thicker than its predecessor, but the size and position of the lens, flash, AF illuminator and self-timer indicator are unchanged. The extra height comes from the curvature of the previously flat top panel, but the positions of the on/off button and shutter release are identical to the previous model. 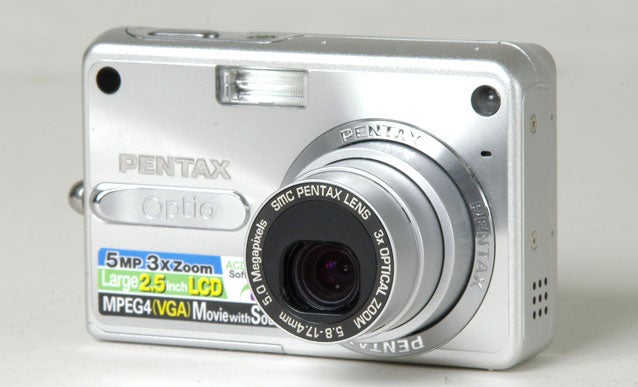 The only other real difference is that where the S5n has a charging cradle that also accommodates a spare battery, the S5z has a separate battery charger. It doesn’t have the charging contacts on the base, and because it is slightly thicker it doesn’t fit into the old cradle anyway.

Because of the big screen, the control layout on the rear panel is rather cramped compared to the elegant design of the S5n. The D-pad menu navigation control is very small and a somewhat fiddly to operate, as is the small rocker switch controlling the zoom lens. Nonetheless the controls are solidly mounted and operate with a nice positive click when pressed, so the camera is actually not unpleasant to use. 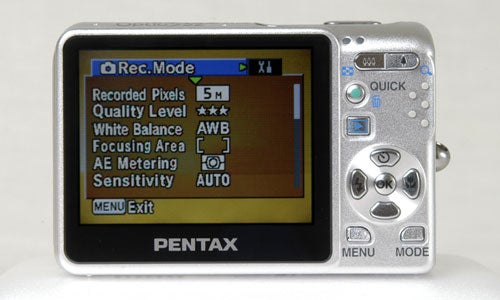 There isn’t much room for your thumb, but what room there is has a textured rubber grip and a small ridge, so holding the camera is quite comfortable, even for those with large hands. Build quality is as good as ever, with a strong all-metal case and a secure sprung hatch for the battery and memory card. The battery has a separate catch, so it won’t fall out while you’re changing the memory card.


The monitor screen itself is certainly big, and looks bigger thanks to the relative size of the camera, but at 110,000 pixels it’s not especially high resolution. This is the same pixel count as the 2in screen on the S5n, so there doesn’t seem to be much advantage to the bigger screen. It could also do with some sort of automatic brightness control, because it is difficult to see in bright sunlight without increasing the screen brightness in the menu. 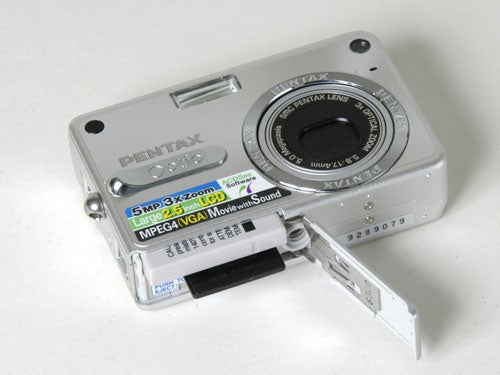 Other than the minor differences already listed, the specification of the S5z is identical to that of the S5n. It has the same comprehensive and easy to use menu system, and the same green button. This is a common feature on Pentax compacts, and can be programmed with one of three functions; an easy “auto everything” shooting mode, a quick start for initialising the recording mode, or the more useful Function setting, which assigns a selection of frequently used menu options as secondary functions on the D-pad, including recorded pixels, image quality, white balance, AF area, metering mode, exposure compensation, and adjustable sharpness, saturation and contrast. This allows the user to customise the controls of the camera, and gives it a welcome versatility not often found in budget compact cameras.

The S5z has the same 16 scene and shooting modes as the S5n, including night scene, landscape, portrait, self-portrait, sunset, food, pets, text copying, sports/action and beach/snow. It also has a special effects mode that includes soft focus, posterisation, stretching/compressing the image, and adding a white border at the bottom of the frame for a caption or label. Other functions include two-level macro focusing (6cm or 18cm), manual focusing, infinity focusing and pan-focusing, which gives the maximum possible depth of field for wide-angle shots. 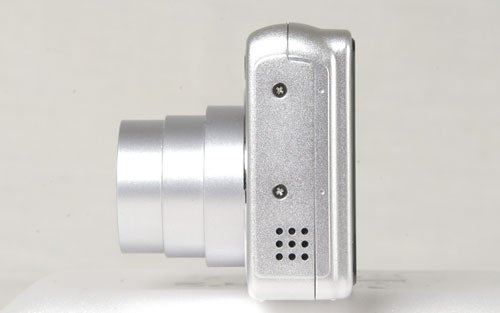 Also available are a time-lapse movie mode and colour filters that can be added in playback mode after the shot has been taken. Other playback options include cropping and resizing, copying, brightness adjustment, movie editing and DPOF print ordering. You can also select one of your shots to be used as the start-up screen. For a camera in this price bracket, the range of features offered by the S5 models is extremely impressive. The only things missing are manual exposure options, but with the range of shooting modes available they are not really necessary. 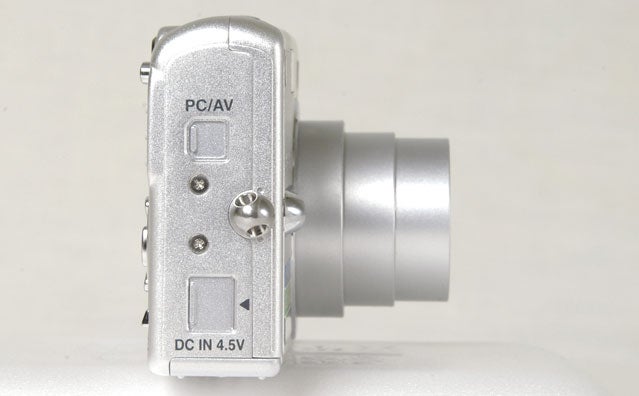 Talking about start-up brings us onto performance. Like the S5n, this camera starts up in approximately three seconds, and in continuous shooting mode it can capture approximately one shot every two seconds at maximum quality. Lowering the image quality slightly increases the shooting rate to about one shot a second. This isn’t particularly fast by recent standards, and as I have mentioned before it is something that Pentax needs to address in its next series of compacts. The autofocus system is extremely quick so there is no appreciable shutter lag, and thanks to the AF illuminator it can focus in complete darkness at a range up to a few meters. 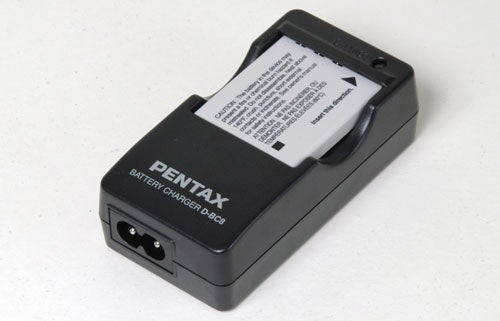 In terms of picture quality the S5z is a solid performer, although it does have a few minor problems. Exposure, focusing and colour reproduction are first-rate, and noise control is especially good. As with the S5n there is no visible noise at 80 or 100 ISO, and only a little at 200 ISO. Some noise is creeping into the shadows at 400 ISO, but images are still completely useable.


The only real problems are associated with Pentax’s versatile but now aging Sliding Lens System. Lens distortion has been an issue for this lens from the beginning, and it rears its ugly head here too. On many shots there is slight but noticeable blurring towards the corners of the frame, most obviously on wide-angle and macro shots. It’s not a major problem, but does mar the performance of an otherwise excellent camera. 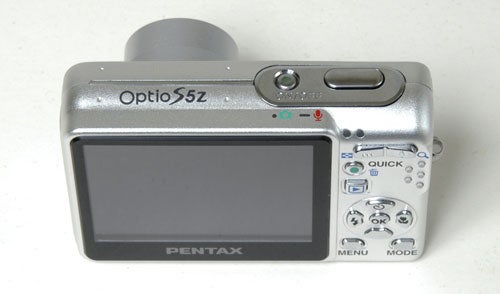 
It’s debateable whether the addition of a 2.5in monitor to an already perfectly good camera really contributes anything useful, but Pentax apparently thinks so. The range of interesting features on offer is impressive, while the easy-to-use controls, attractive compact style and superb build quality make this a very good general snapshot camera. Despite some lens distortion image quality is good, and the S5z represents excellent value for money. 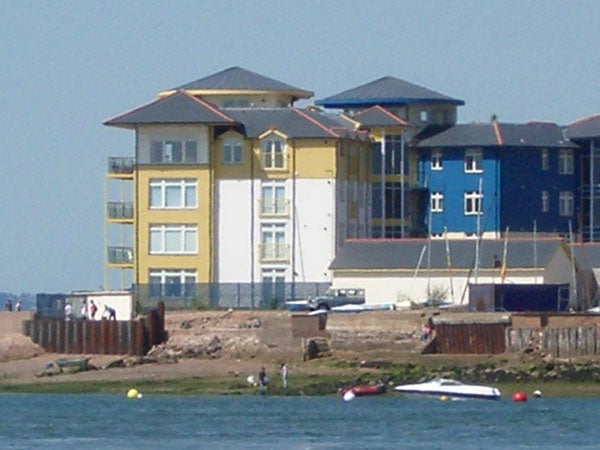 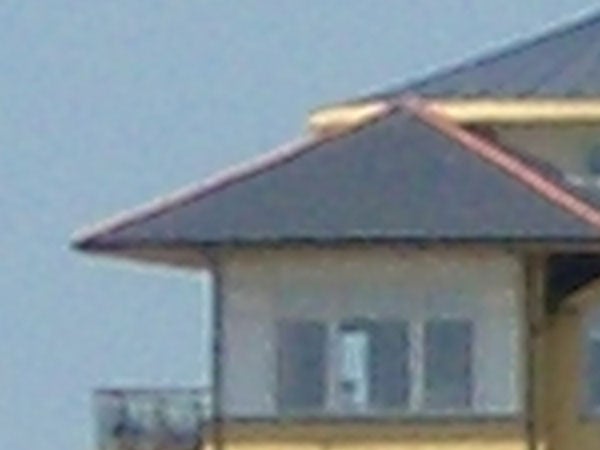 Digital zoom is seldom worth using, since it reduces the overall resolution of the frame and causes jagged edges and interpolation artefacts. 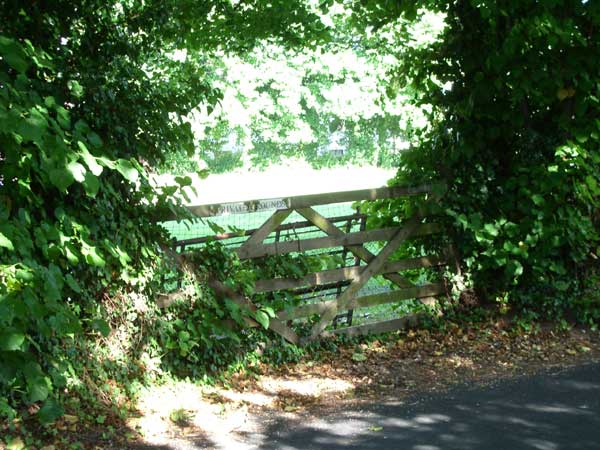 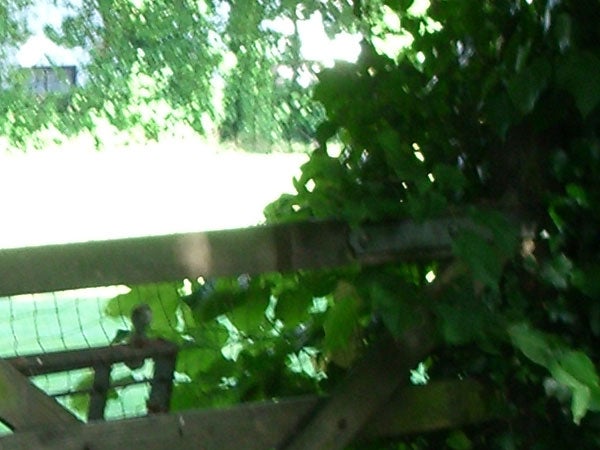 At the lowest setting images are smooth, detailed and completely noise-free – let’s not mention the camera shake 🙂 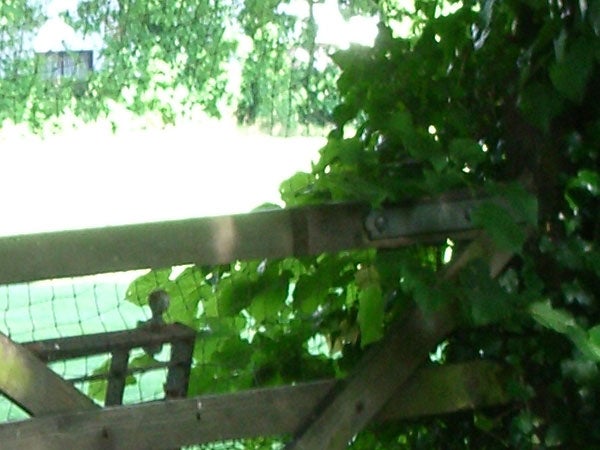 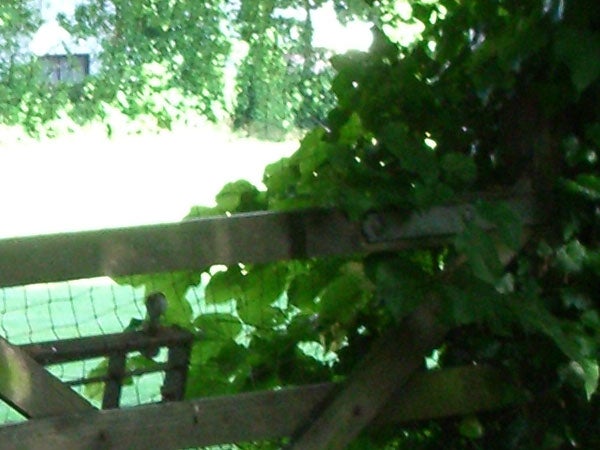 At 200 ISO some colour speckling is visible in the darker areas, and noise reduction has blurred out some fine detail 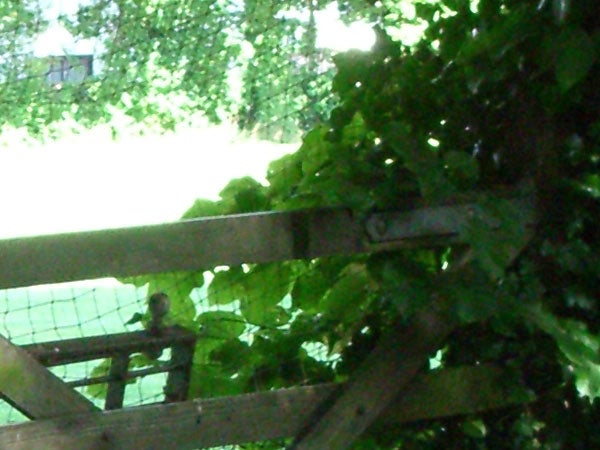 At the highest setting darker areas have quite a bit of noise, but lighter areas are still relatively clear. More detail has been lost though 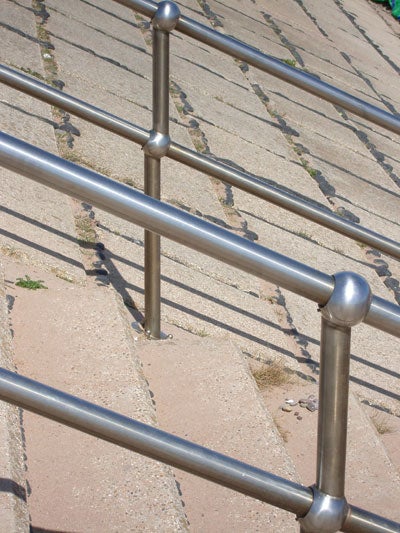 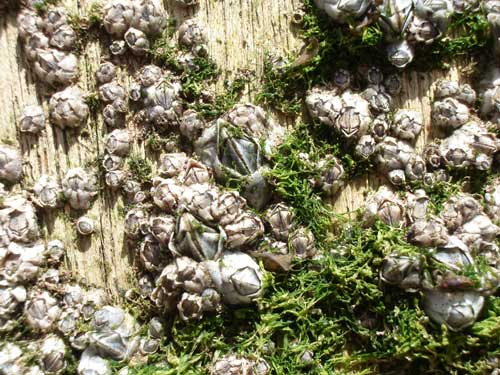 With a 6cm macro range the S5z shows just how ugly barnacles are at close range. However there is significant lens distortion at the edges of the frame 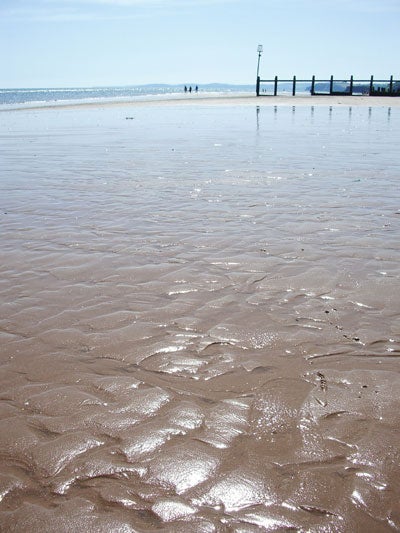 The exposure system copes well with high-contrast into-the-sun shots like this, which makes the S5z and ideal summer holiday camera 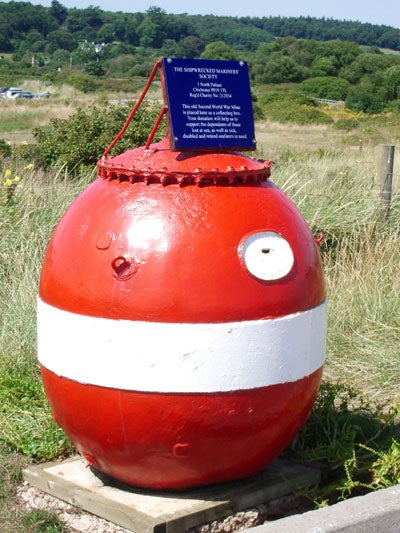 Colour reproduction is excellent, as shown by the strong red, green and blue tones in this shot 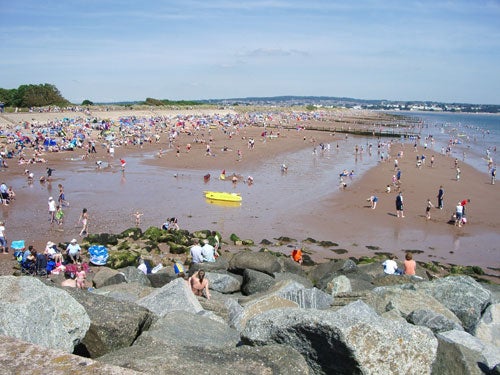 A wide-angle shot of the great British public on holiday, at Dawlish Warren in Devon. And people wonder why I take my holidays in France… 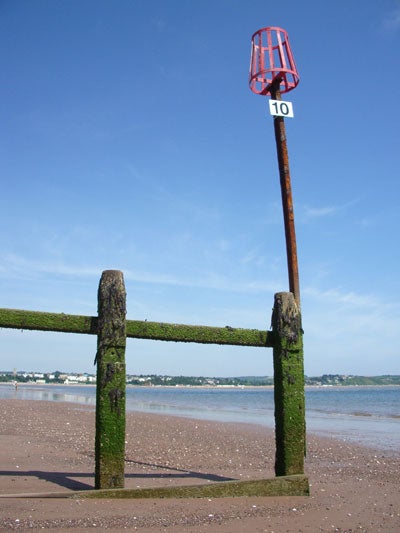 The Pan-focus mode is useful for getting the maximum depth of field in wide angle shots like this one, where you need foreground and background to be in focus