A couple of weeks ago I reviewed the Nikon Coolpix L10, the entry-level model of Nikon’s compact camera range. This week it’s the turn of Pentax’s bottom-of-the-range model, another low-cost camera using AA batteries for power. 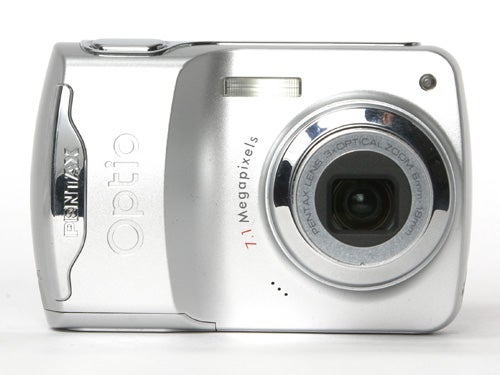 The Pentax Optio E30 is a budget-priced 7.1 megapixel compact camera featuring a 3x zoom 6mm-18mm f/2.7-4.8 lens (equivalent to 36mm-108mm in 35mm format), a 2.4-in LCD monitor, and a fairly basic specification. It is available from online retailers for just under £95. There are a surprising number of 6-7MP entry-level cameras with AA battery power available, but most are more expensive than the Pentax. For example the Canon PowerShot A550 is around £140, the Nikon CoolPix L11 is £119, the HP Photosmart M627 is £159, the Samsung DigiMax S730 is £109 and even the Kodak EasyShare C653 is £100. Of cameras from the major brands only the Fujifilm FinePix A700, the Olympus FE-210 and the 6MP Panasonic Lumix DMC-LS60 are about the same price.


Initial impressions of the E30 are not massively encouraging. Its appearance looks quite dated by recent standards. Measuring 61.5 x 94.5 x 35.4mm it looks positively bulky next to the ultra-slim M30. However even with two alkaline batteries inserted it somehow manages to feel rather light and insubstantial, which is odd since it weighs a fairly hefty 185g. 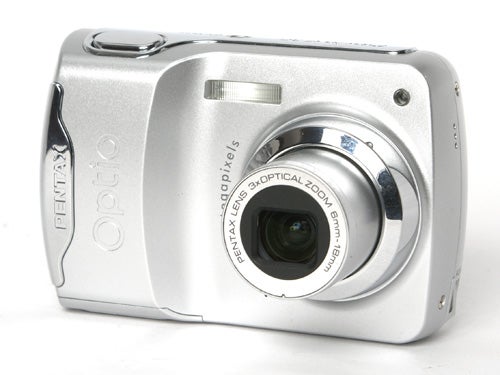 However a closer examination reveals that despite its plastic body it is solidly put together with no creaks or groans even when squeezed. The comparatively large handgrip, the larger-than-average size of the controls, and particularly the large shutter button might make it a suitable camera for someone with limited flexibility in their hands and fingers, something which I imagine would be a serious problem with many of today’s ultra-compact cameras. Likewise the battery hatch and card slot are very easy to open, with a simple sliding hinged cover that has no latch. This does mean it can be prone to accidental opening, in which case your batteries will fall out, but if easy access was the intention then it has succeeded.

Like many Pentax compacts, performance is not exactly a highlight. It starts up in just over three seconds, which is a bit on the slow side, and shuts down again in just under two. In single-shot mode it can average one shot every 2.5 seconds, which is a little on the slow side even for a low-cost camera. In continuous shooting mode it can manage a burst of three shots in just over one and a half seconds before it has to pause for about seven seconds to write them to the memory card. Focusing speed isn’t bad though, and is one of the areas where it appears to be significantly quicker than the M30. It struggles a bit in low light though, and since it has no AF assist lamp it doesn’t focus at all once light levels fall below a certain point. The zoom control is a bit hit or miss as well, since it only has five steps from maximum to minimum focal length. 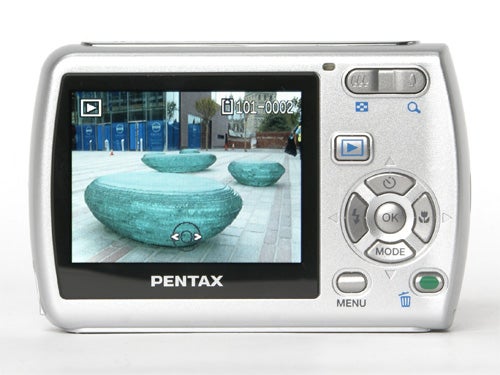 The E30 is a bit short on features even for a budget camera. It does have infinity and manual focus, and a two-speed self-timer (2 or 10 sec). It also has 15 modes, but these include the movie and sound recording modes. There only 12 actual scene modes, including all the usuals, such as portrait, landscape, sports, flowers, snow, sunset, food etcetera. It also has the unusual Pentax Pets mode, with separate settings for cats and dogs, and of course the much admired Frame Composite mode. Even the usual Pentax playback modes such as colour filters are absent from the E30. The movie mode is adequate, shooting in 640 x 480 pixel resolution at 28 frames a second with mono sound, although the audio quality is very poor.


The LCD monitor is quite low resolution by recent standards, with only 110,000 pixels. It is also very reflective and not very bright, which makes it difficult to see in sunlight. The angle of view is also much lower than in many cameras I’ve seen recently. Really, I thought we’d seen the last of problems like these five years ago. 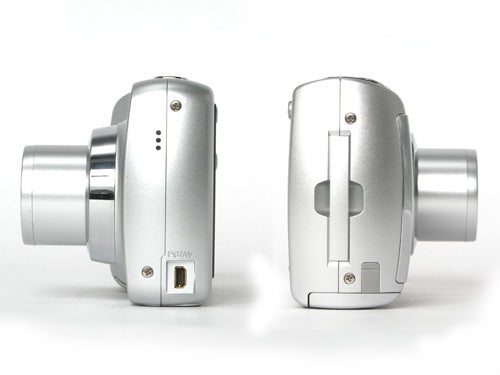 In its promotional blurb Pentax claims around 200 shots on a set of alkaline AA batteries as though this was somehow remarkable, whereas in fact that’s a fairly average performance for a modern AA-powered compact. Unfortunately it may also not be true. Using the AA alkaline batteries supplied with the camera I was only able to take 65 shots before the battery ran out, although to be fair they were undated Chinese imports so there’s no way to know how long they’d been sitting on a shelf in some Beijing warehouse.

It’s hard to avoid comparisons between the E30 and the Nikon L6 that I reviewed a few weeks ago. That camera was smaller, lighter, better looking, had double the battery duration and had many more features for about the same price. It may have only been 6 megapixels, but it was a much better camera. There was a time a few years ago when Pentax was the undisputed king of ultra-compact cameras, but I have to say that these days most of the Optio range is lagging a long way behind the competition and is overdue for a major shake-up. About the only recent camera I can think of that the E30 beats is the dismal Fuji A700, and that’s not saying a lot. 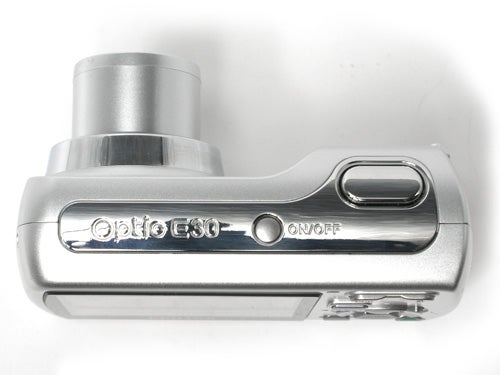 The E30’s one saving grace is its picture quality, but even that has its limits. The lens performs well, providing good corner-to-corner sharpness with minimal distortion, and colour rendition and exposure are very good. Dynamic range is fairly limited, but then it frequently is with cameras in this class. As long as you manually set the camera to 80 ISO and only ever use it at this setting then noise control is also very good, but as soon as the ISO gets even as high as 160 there are image noise problems, which by the camera’s maximum setting of only 400 ISO are so bad the pictures are unusable. All in all a rather disappointing camera from one of the big name brands. 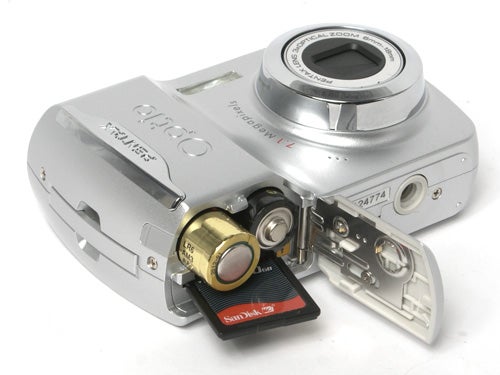 The Pentax Optio E30 has little to recommend it besides its price. Build quality and handling are of an acceptable standard, but performance and features do not match up to similarly priced models from other brands. Optical quality is good, but let down by limited dynamic range and poor noise control at all but the lowest sensitivity. 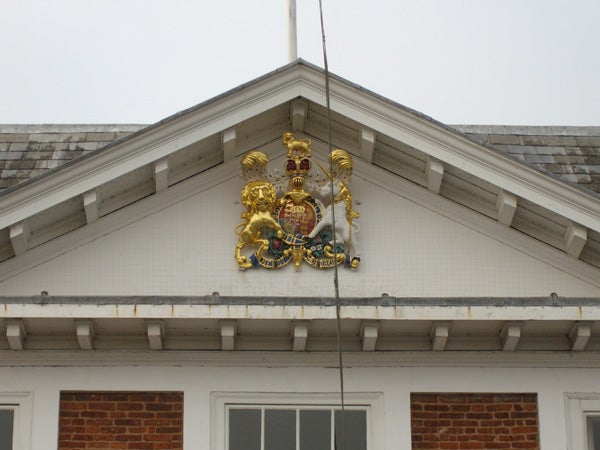 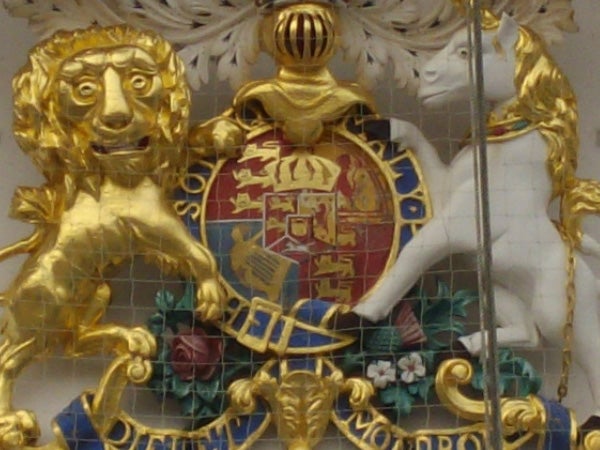 At the minimum ISO setting of 80 the image quality is very good, with bright clear colours and no image noise. 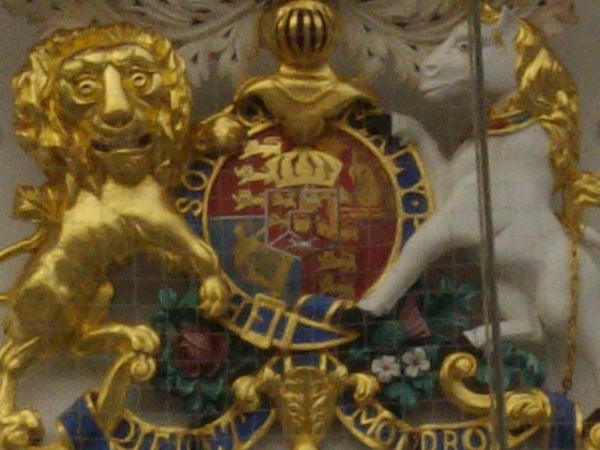 At only 160 ISO there is already colour speckling in the darker areas of the image. 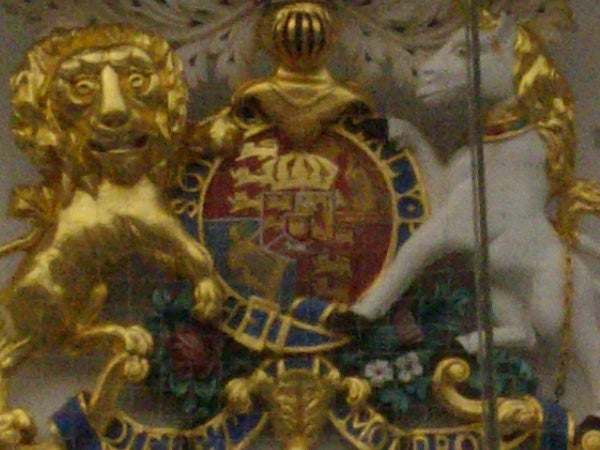 At 320 ISO there is visible noise right across the image, and detail is already breaking down. 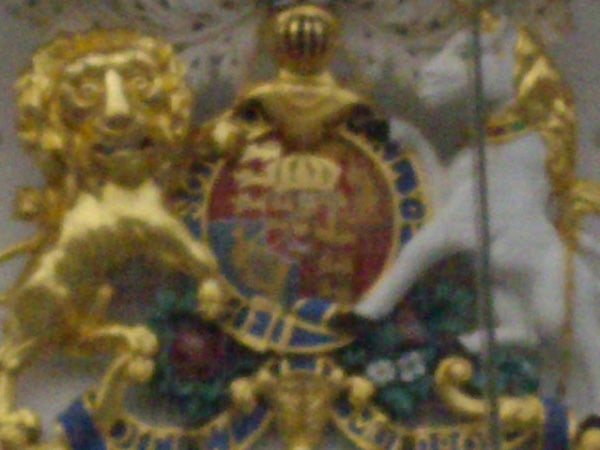 At the relatively low maximum sensitivity of 400 ISO the image quality is very poor, with severe loss of detail, colour distortion and visible noise. 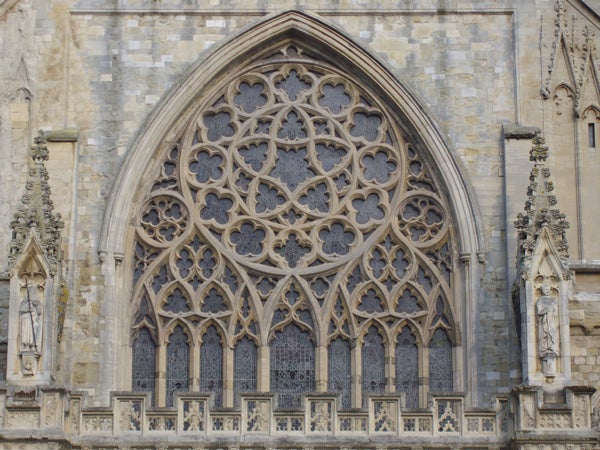 For comparison with other compacts, here’s my usual shot of the cathedral window. Click to see a full-sized version. 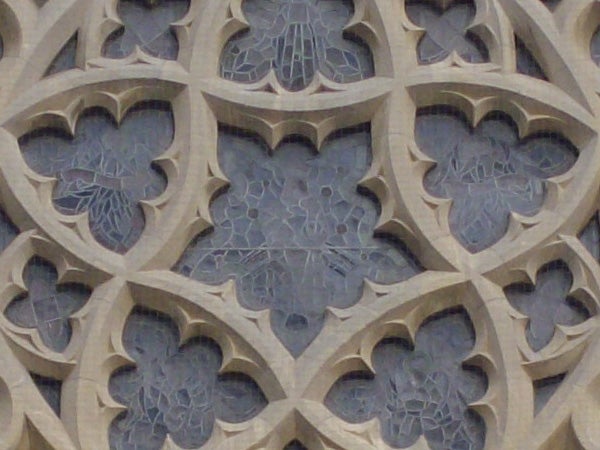 This is a crop from near the centre of the previous image. The level of detail is quite poor for a 7MP camera. 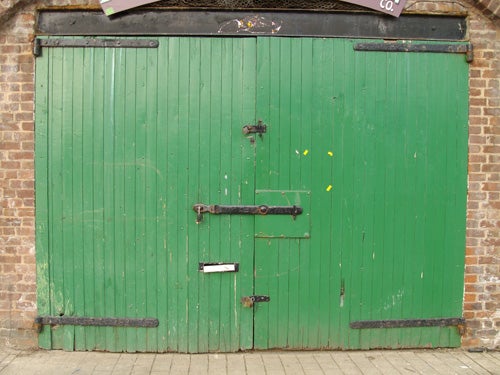 The 3x zoom lens on the E30 isn’t too bad, producing relatively good edge-to-edge sharpness and only slight barrel distortion. 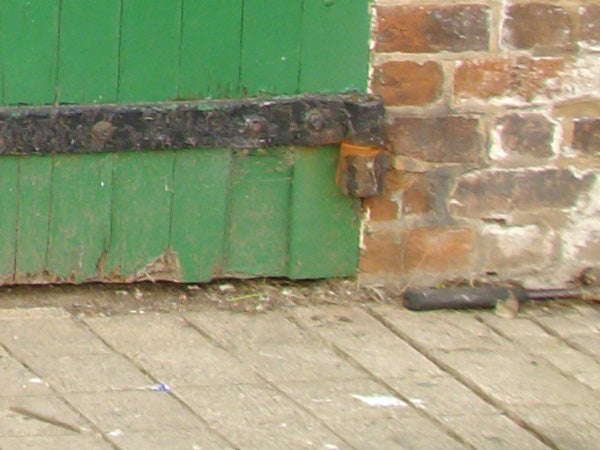 This is a corner crop from the previous image, showing the lack of corner blurring. 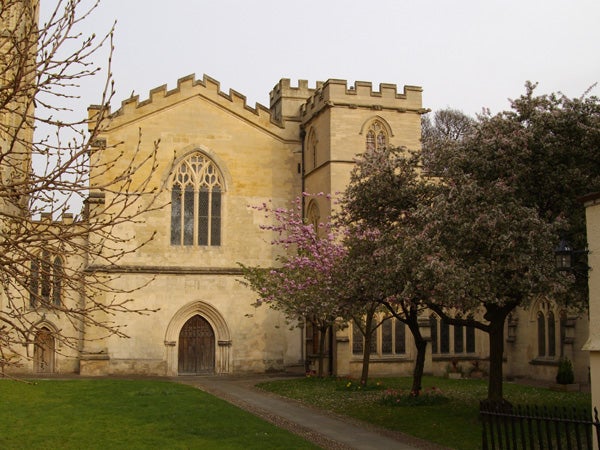 Colour rendition and exposure are good, one of the E30’s few good points. 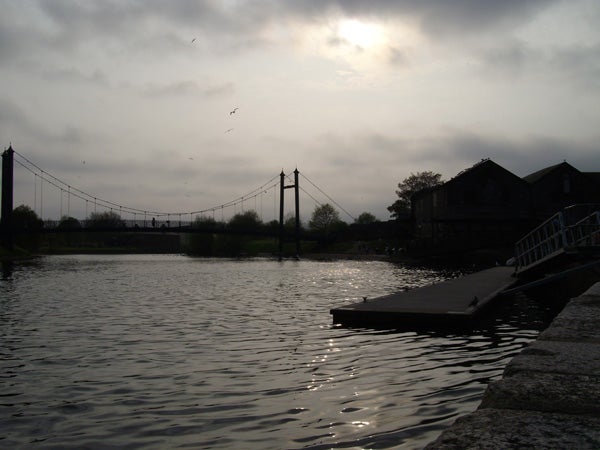 Shooting into the light shows up low dynamic range. The shot lacks shadow detail and has burned-out highlights. 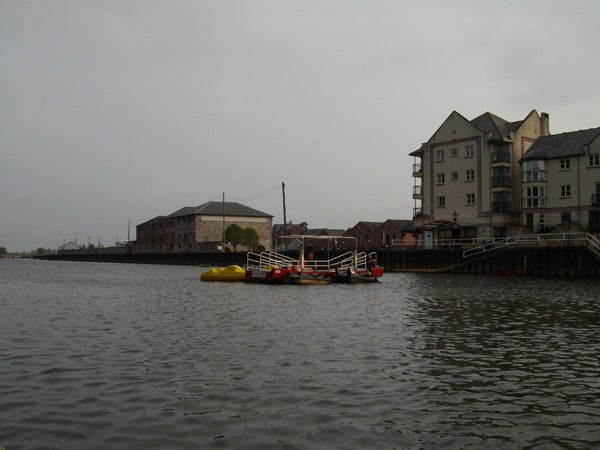 The E30’s lens has a wide end equivalent to 36mm, wider than some rivals, but still not very wide at all. 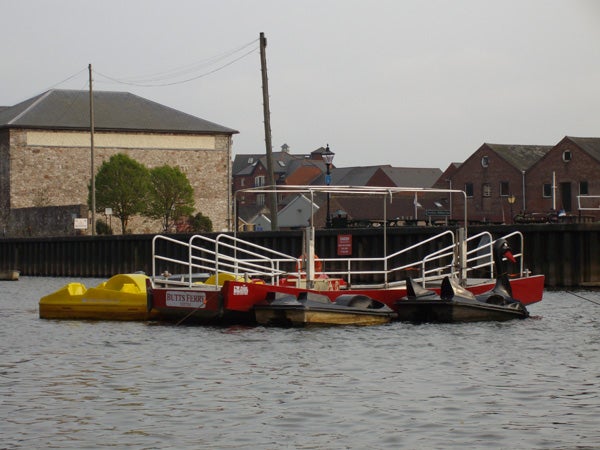 The telephoto end is equivalent to 108mm, about average for a 3x zoom.