While we’re still awaiting news on the future of Pentax’s compact camera range, its digital SLR range continues to expand in interesting directions, with the launch of the latest semi-pro model. The K20D has been developed in partnership withSamsung who are responsible for the camera’s powerful new 14.6-megapixel CMOS sensor. It replaces the 10.2-megapixel K10D, launched last year, and joins the K200D and K100D Super in Pentax’s current range. 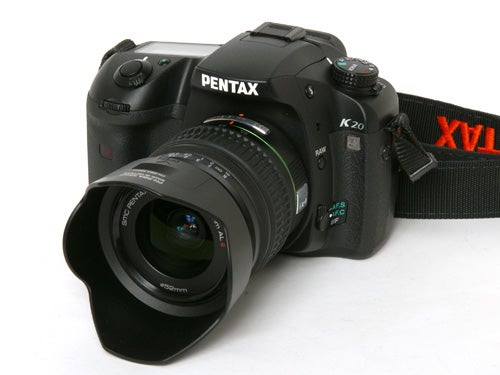 Pentax is one of the original “Big Five” Japanese camera companies, alongside Nikon, Canon, Minolta (RIP) and Olympus, and has a history dating back to 1919. Traditionally Pentax’s core market has been the amateur enthusiast photographer, with a long series of affordable but high-qualitySLRs such as the Spotmatic, ME Super and P30, although it has also produced some outstanding professional models over the years, including the current 645NII and 67II medium-format film cameras. Pentax has always played second fiddle to market leaders Nikon and Canon, and even now has a much smaller share of the digital SLR market than any of the other major players. However the brand’s rich history of quality and innovation is still apparent in the current models. 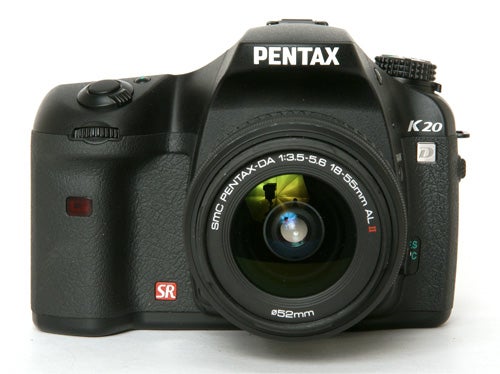 The K20D has a range of features that put it into the top bracket of current semi-pro DSLRs. As well as the most powerful sensor of any camera this side of Canon’s £2,500 full-frame EOS 1Ds Mk III, it has a tough weatherproof alloy body, body-integral sensor-shift image stabilisation, 2.7-inch 230k LCD monitor, expanded dynamic range function and even live monitor view. The K20D costs around £769 body-only or £899 in a kit with an 18-55mm f/3.5-5.6 lens, which compares very favourably with other high-endDSLRs . Arguably the closest matches in terms of specification are the Nikon D300 (£1,100 body-only) and the Sony Alpha A700 (£1,000 body-only), both of which have 12.2-megapixel sensors, but the Pentax comfortably beats both models on resolution and more importantly on price. The only fly in the ointment is the GX-20, from Pentax’s business partner Samsung. The GX-20 is virtually identical to the K20D, but costs about £20 less for the same kit. Of course the Samsung badge on the front doesn’t have quite the same cachet as the Pentax name, so maybe that’s worth the extra. 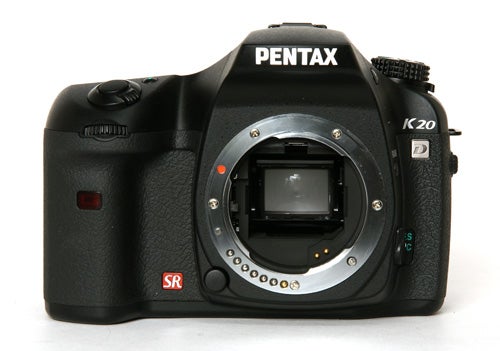 The body design is based on the K10D, which is no bad thing. It has a large and comfortable hand-grip with a textured rubber coating that is repeated on the back for the equally ergonomic thumb-grip area. The body feels very tough and durable, and the card and battery hatches have locking catches and water resistant rubber seals. The control layout appears complex, but is actually very intuitive and self-explanatory for anyone with any SLR experience. Main exposure and metering modes are selected by a simple dial on the top left, including a preset User option and an X-sync flash setting. It also has a feature which is, as far as I know, unique to Pentax cameras, a sensitivity-priority exposure mode. On the right of the top plate is a large and well-lit LCD data display with a range of shooting information, although I would have liked to see a bit more information on this, such as a permanent display of ISO setting or colour space. 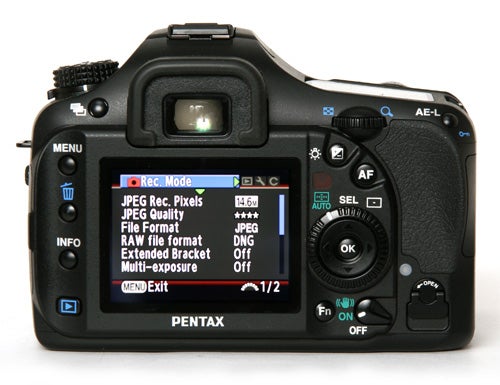 Like most high-spec DSLRs it has a dual control wheel system for exposure and setting adjustments, with a separate D-pad for menu navigation. The menu system is divided into two parts; a quick function menu for custom colour settings, white balance, flash mode, ISO setting and drive/timer mode, and a main menu for all other camera settings. Also in common with other high-endDSLRs the K20D has a huge range of customisable features so you can set the camera up just how you like it. Options include four different JPEG compression settings, a choice of eitherPEF or Adobe DNG RAW modes, multi-exposure, interval shooting, and sRGB or Adobe RGB colour space.

The K20D is equipped with Pentax’s moving-sensor image stabilisation system, which has shown itself to be one of the best on the market. Pentax claims that it offers four stops of extra shooting stability, but this is a little optimistic. Using the kit 18-55mm lens supplied, at the longest focal length of 55mm, conventional wisdom says that you need a shutter speed of at least 1/60th of a second for hand-held shooting, so adding four stops to this would give a shutter speeds of 1/8th of a second, but shots taken at this speed show very visible movement blur. Speeding up by one stop to 1/15th of a second produces shake-free shots fairly reliably, which is a three-stop advantage. It may be that the shake reduction works better using lenses with a longer focal length, but with the standard three stops is the limit. Mind you three stops isn’t at all bad, and compares well with the performance of lens-based IS systems used by other manufacturers. 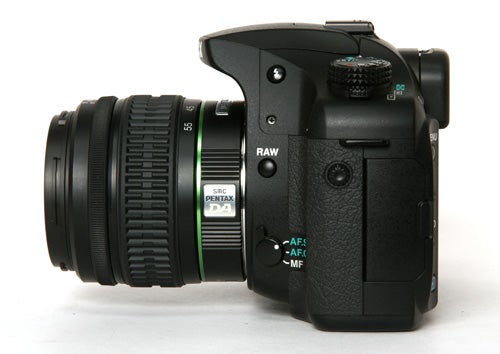 Dynamic range enhancement is becoming a must-have feature on high-spec digital cameras, and especially on DSLRs. All the main manufacturers include something of this type; Sony has it’s DRO system, Nikon has Active D-Lighting, and so on. Naturally Pentax has such a system, called Expanded Dynamic Range, which is activated from the ISO setting menu. It is pretty straightforward, simply selectively altering the sensitivity to enhance shadow detail and reduce highlight clipping. As such systems go it is very effective and has no noticeable negative impact on image quality. 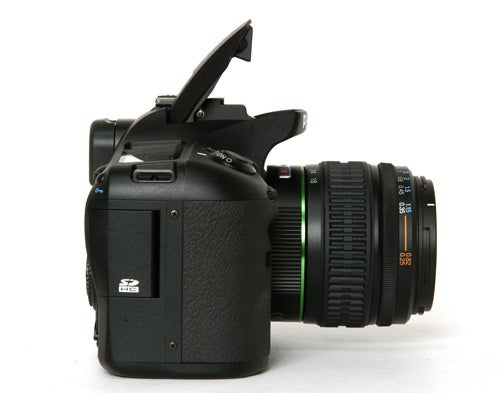 The other essential feature for any modern DSLR is monitor live view. The K20D has this feature too, although like the EOS 40D it is a bit limited. It doubles as a stop-down preview, so the image will be very dark at narrow apertures, and of course autofocus is not available while in live view mode. Still, it is a useful feature under some circumstances despite its limitations.

The K20D’s performance is very good, although it’s not as fast as some of its rivals. It has Pentax’s newly improved SAFOX VIII autofocus system, with 11 focusing points spread widely across the frame. Nine of these sensors are of the more accurate cross type, and I was suitably impressed by the speed and accuracy of the system. The only camera I’ve seen recently with a better AF system is the much more expensive Nikon D300. 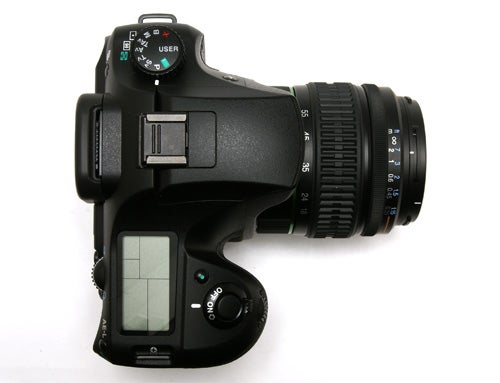 Shooting speed is also fast. In single shot mode it can take a picture just as fast as you can press the shutter button, at least two shots a second. There are two continuous shooting modes, a high-speed setting that captures three frames a second, but is limited to 38 shots in JPEG mode or 14 in RAW PEF mode, and a low-speed mode that can shoot at 2.3 frames per second but can carry on until the memory card is full. That may not sound too fast compared to the EOS 40D’s 6.5fps, but it’s fast enough for most purposes, and is pretty impressive when you consider that it is writing JPEG files that average around 10MB each, and RAW files of over 23MB.


Those huge file sizes translate directly into image quality, and here is where the K20D really shows its worth. Quite simply it produces the sharpest, most finely detailed pictures of any current semi-pro DLSR. Dynamic range performance is outstanding even without the Enhanced Dynamic Range feature, and colour reproduction is as good as ever. However it is not without its problems. I found that exposure metering was often inconsistent, and often under-exposed by as much as a stop. This isn’t as much of a problem as over-exposure, and is easily corrected in RAW post-processing, but it really shouldn’t be happening on a camera of this quality. I also noticed some inconsistency in white balance from shot to shot, especially at higher ISO speeds. High ISO noise control is very good though, with little sign of noise until 800 ISO, and perfectly usable images at 1600 ISO. Even shots at the 3200 ISO maximum are far from hopeless. 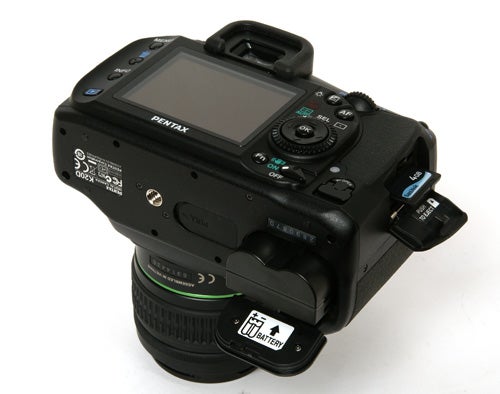 The quality of the supplied 18-55mm lens is better than most kit lenses, and produces good edge sharpness with little distortion, but it is a bit prone to chromatic aberration in the corners. This lens has been in use now for over eight years and it is beginning to look a bit weak by modern standards. If I was to buy a K20D (if only I could afford it!) I would buy it body only and buy the rather lovely SMC PENTAX-DA 16-45mm F4.0 ED/AL instead.

With the launch of the K20D Pentax is taking on the top players in the semi-pro DSLR market. It has a class-leading specification, with build quality, handling and performance to match, and has exactly the sort of features that will appeal to advanced amateurs and semi-professionals. The slight problems with exposure consistency are annoying but not fatal, and the breathtaking detail of that 14.6MP sensor more than makes up for it. The K20D is a very accomplished camera and exceptional value for money. 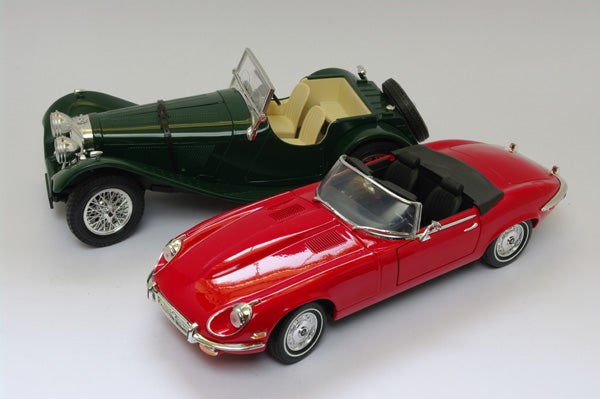 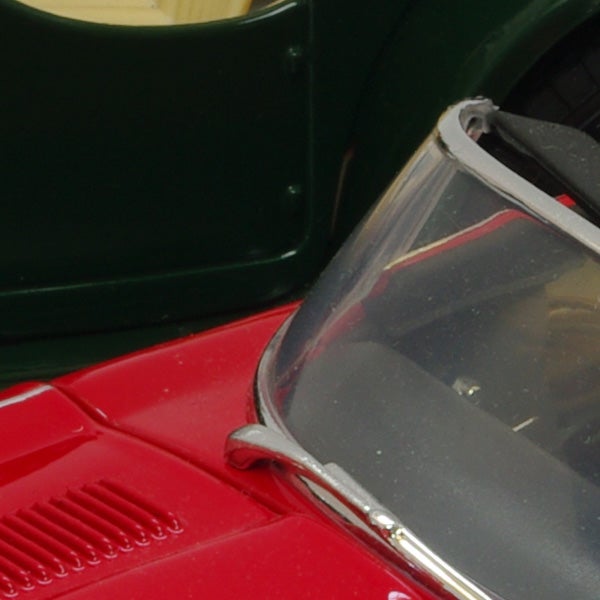 Not surprisingly the image is totally noise-free at 100 ISO. 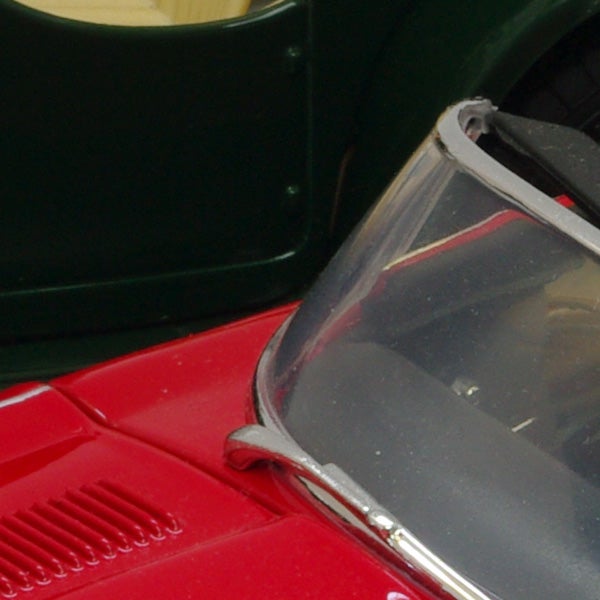 No significant difference at 200 ISO. 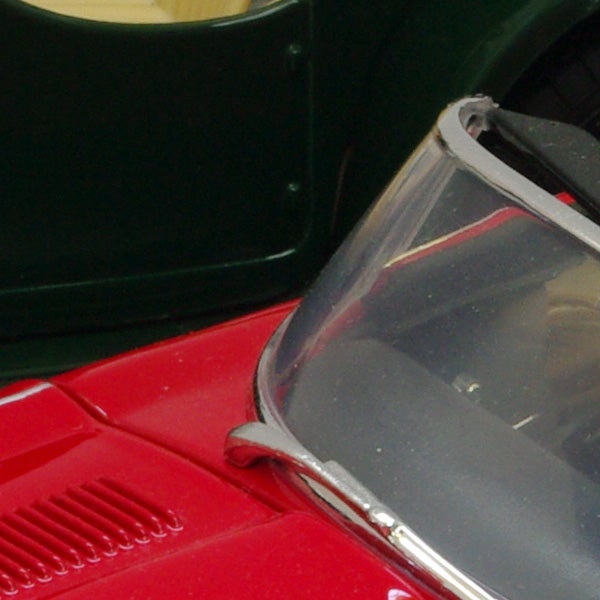 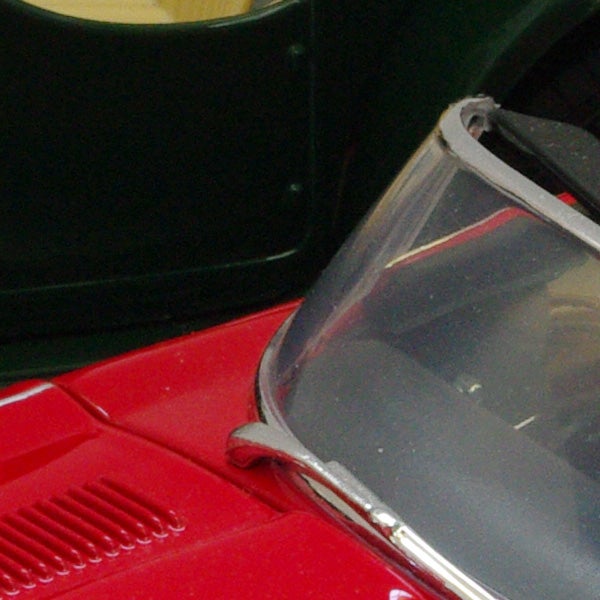 There is a little noise visible at 800 ISO, but not enough to worry about. 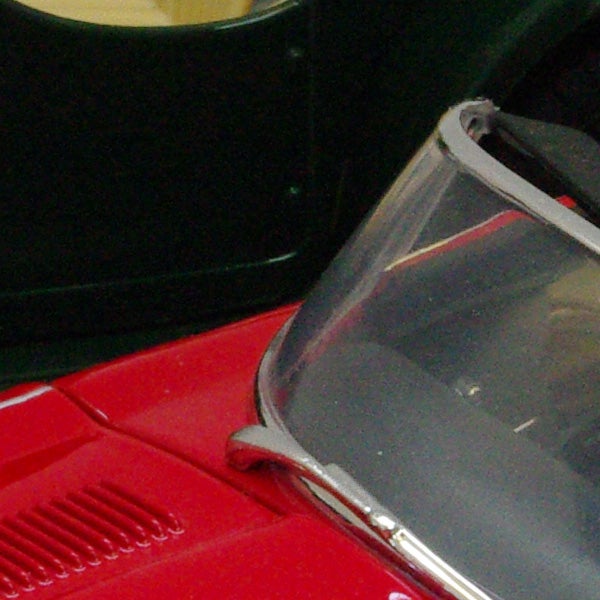 Slightly more noise at 1600 ISO, but you could still print this. 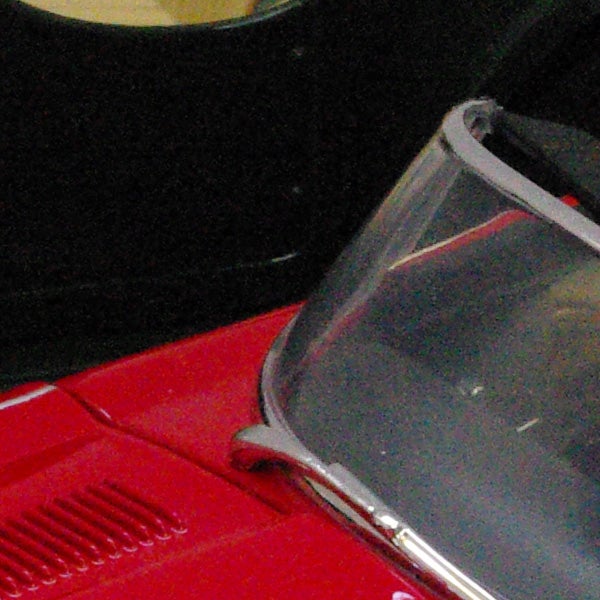 Significant noise at 3200 ISO, but the colours are still strong and bright. 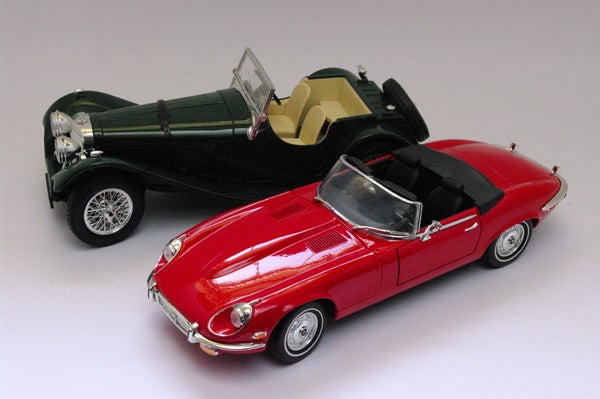 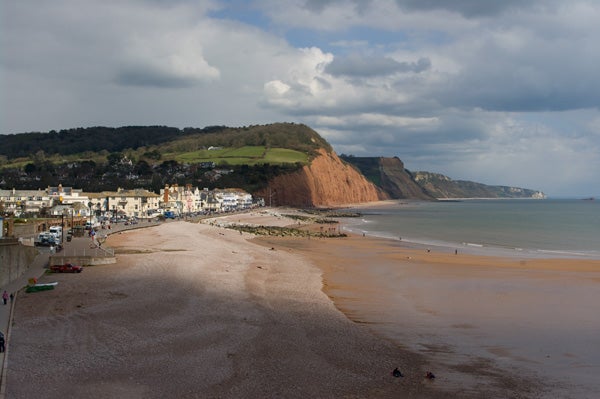 Here’s my usual DSLR test shot of Sidmouth sea front. Compare this with the Nikon D300, Sony A700 and Canon EOS 40D. 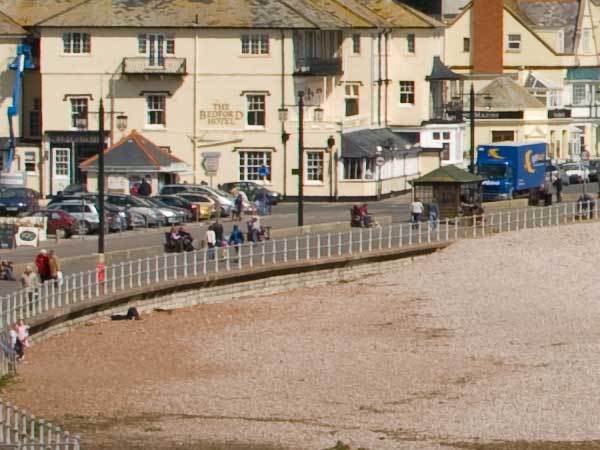 The level of detail captured by the 14.6MP CMOS sensor is astonishing. 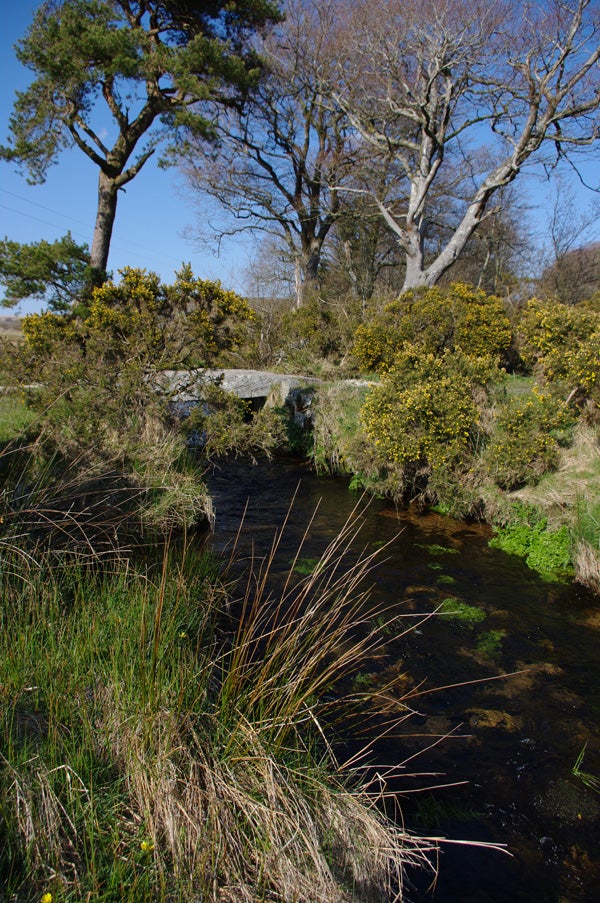 Colour rendition is superb, although this shot is slightly under-exposed. 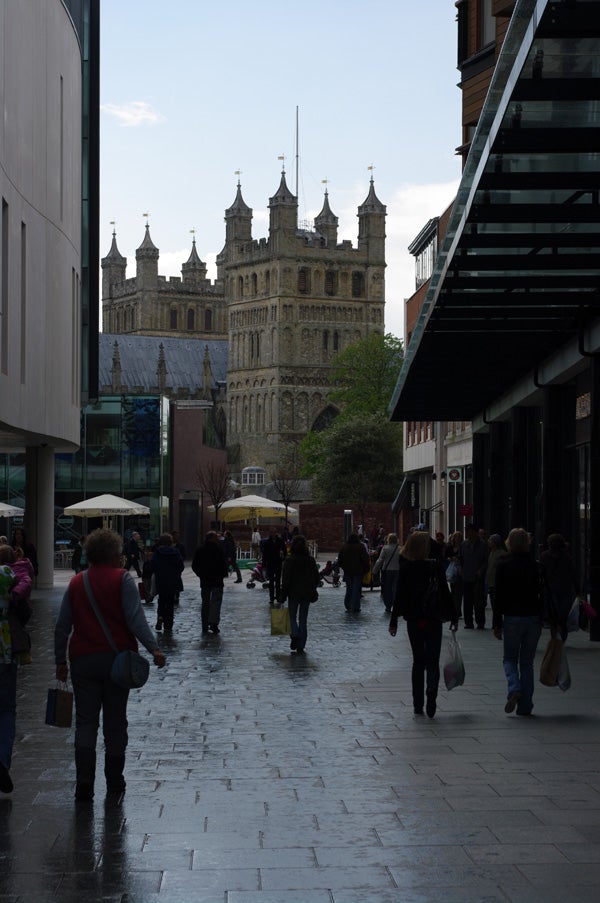 This was taken without the benefit of the Expanded Dynamic Range feature. 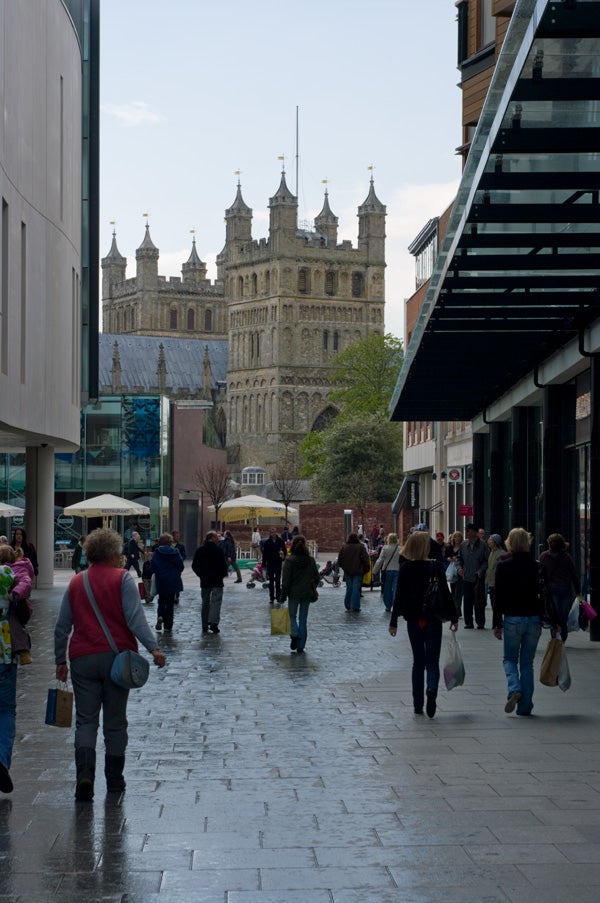 This is the same shot but with the EDR feature switched on. 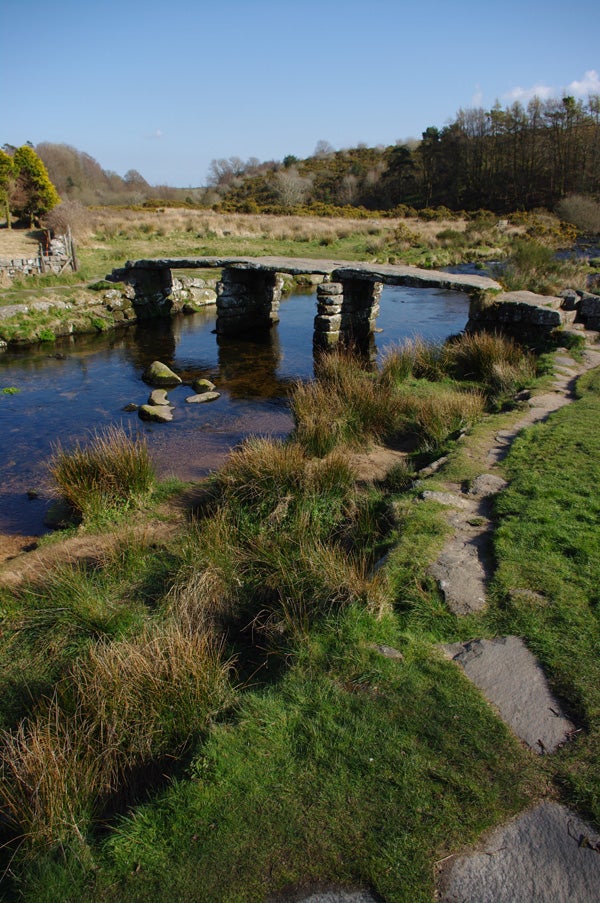 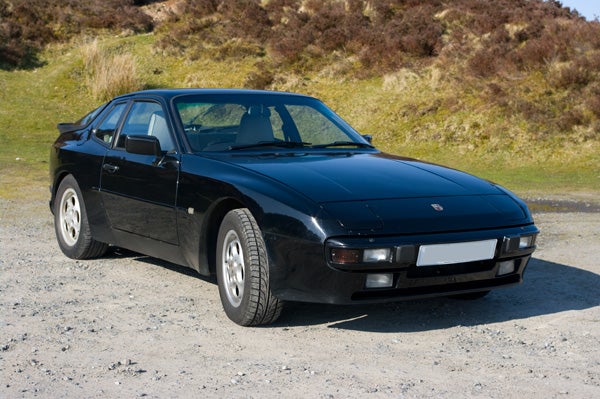 Even black shiny things are no problems.