If you’re over the age of 30 and studied photography at college or university, chances are you learned the basics on the venerable Pentax K1000. It was a basic manual-only camera with a match-needle lightmeter, perfect for beginners, and what it lacked in features it made up for in robust reliability, superb handling and excellent picture quality.


After a 21-year run the K1000 finally ceased production in 1997, but Pentax still makes a camera for beginners. It’s called the *ist DL2 and it was launched in January this year. 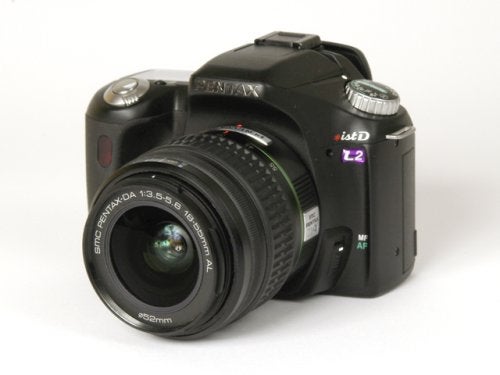 The *ist DL2 is the very epitome of the entry-level DSLR, and that includes the price. It is available exclusively from Jessops, so there are no dubious online discount deals available, but even so it is priced at an incredibly competitive £349 including a high quality 18-55mm f/3.5-5.6 Pentax DA lens. Compare that with £393 for the Nikon D50 or £485 for the (8 megapixel) Canon EOS 350D with similar sized lenses and the DL2 looks like a very tempting package.


Pentax has always been known for making very compact and lightweight SLRs, and the DL2 continues that tradition. Comparing it side by side with the Nikon D50 reveals that the Pentax is 55g lighter, 8mm narrower, 9mm shorter and 10mm thinner than its rival. Even with the 18-55mm lens attached it is still light enough to use comfortably one-handed if necessary. The low weight is all the more remarkable when you remember that like all of Pentax’s digital SLRs the DL2 is powered by 4 AA batteries. In fact the weight of the batteries inside the handgrip helps to balance the camera. 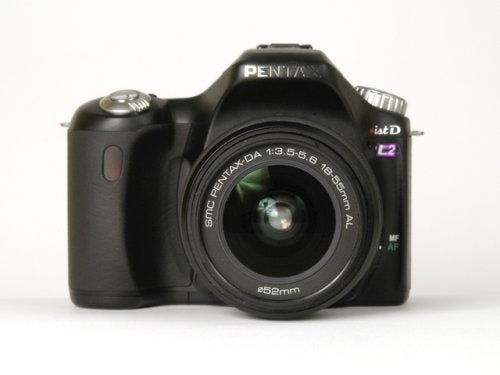 With such a small camera there is of course the danger that handling could be compromised, but fortunately this is not the case. The DL2 only has a bare minimum of external controls and they are well spaced out so they’re not crowded. The handgrip is small compared to other DSLRs, but is comfortable to hold even for my very large hands. The sculpted shape is a definite improvement over the rather cramped grip of the *ist D, and a large thumb grip at the back makes for a very secure hold.

The middle of the back panel is dominated by the big 2.5-inch LCD monitor, which with 210k pixels is significantly sharper than the screens on either the D50 or 350D. Like most SLRs the DL2 doesn’t offer a live preview, but it does provide instant review with full exposure information, exposure histogram and optional clipped highlight indication on playback. 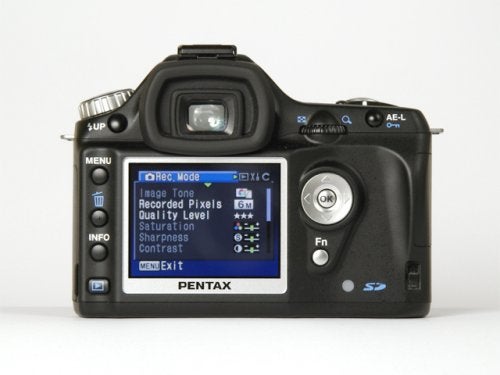 The viewfinder is large and bright, but is a bit lacking in information. Aperture, shutter speed, frames remaining, program mode, and a manual focus warning are all you get. The camera beeps for focus confirmation, but there are no focus points marked on the viewfinder.


The controls and available options are more reminiscent of a high-end compact camera than a professional SLR. The main mode dial has the necessary SLR manual exposure modes, but also has program settings for portrait, landscape, macro, action, night portrait and flash-off modes. As well as these it also has eight scene modes that are lifted whole from an Optio compact, even including the same menu icons. Modes include night scene, surf & snow, text, sunset, kids, pets, candlelight and museum. Bizarrely, the pet mode offers a choice of icons, for a cat or a dog depending on your preference. It makes no difference to the operation of the camera which you choose, only the icon is different. 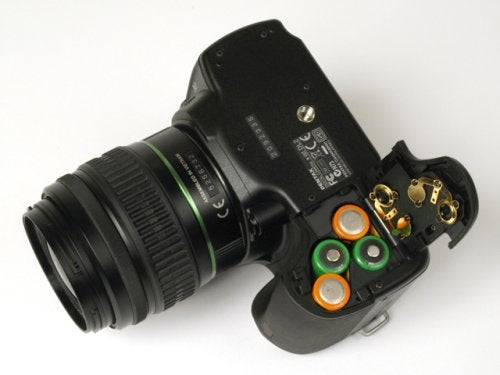 Other options are more basic. The top slot on the menu is image tone, which has only two settings. Unfortunately, these aren’t labelled on the menu, but page 110 of the manual reveals that they are bright and natural modes. Other choices on the menu include three image sizes (1.5, 4 and 6MP) and four image quality settings including RAW mode. There are also sliders for saturation, sharpness and contrast, although the actual degree of control is limited.


Metering gets the usual three choices – matrix, CW or spot, but focus area has only wo, wide area or centre spot. There is no option for a selectable focus point.


One unusual feature is the aperture preview. Turning the on/off dial clockwise an extra notch activates the preview function. Rather than showing you the result in the viewfinder like most SLRs, the DL2 takes a picture and displays it on the monitor, but doesn’t write it to the memory card. It would be even better if it was possible to zoom this picture to check sharpness more closely.

Other external controls include exposure compensation, AE lock, and an FN button that provides a wide range of secondary functions on the D-pad. Manual or auto focus is selected by a two-position switch on the side of the lens mount. There is no continuous AF option.


Despite its cut-down list of features, it still has some nice touches. The self-timer includes a 2-second option with mirror lock-up for vibration-free shots, and its ISO range of 200-3200 beats both the D50 and 350D. Like the D50 the DL2 uses SD cards for storage, so those memory cards from your compact will work. 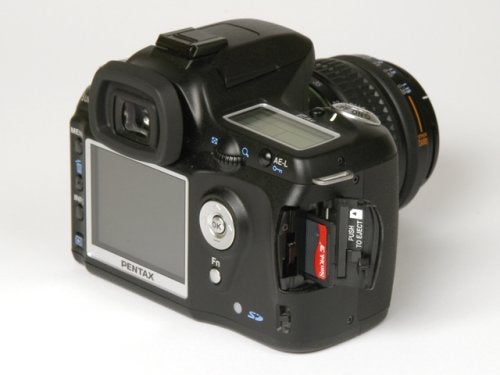 The built-in pop-up flash is particularly nice. It has a stated guide number of 15.6, but I found that it was easily capable of lighting up a large room. It also doubles as a long-range AF lamp, firing as a high-frequency strobe so fast that it appears to be continuous illumination.


Shooting performance is a little erratic. In continuous mode the DL2 can shoot five frames in about three seconds, and after that slows to an average of about one frame a second. I say average because it has no sense of rhythm at all, and shoots at apparently random intervals.


However, in single shot mode, focusing and exposure are admirably quick and shutter response is effectively instant, which is what one expects from a digital SLR. 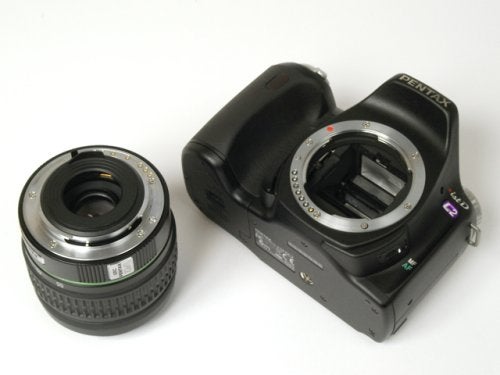 The DL2 uses the same 6MP sensor as the rest of Pentax’s current DSLR range, which is, I think, the same sensor as the Nikon D50. However, Pentax seems to have been able to do more with it than Nikon could. If you refer to my review of the D50 from December last year, you’ll find that it suffered from purple fringes on high-contrast edges and the white balance system tended to put a blue colour cast over everything.


Fortunately the *ist DL2 has none of these problems. In the default vivid mode, images are sharp bright and colourful. Possibly a little too colourful in fact, with reds especially being a bit over-saturated. In natural mode, images have a much more realistic tone, with just a hint of softness that responds very well to a light application of unsharp mask.

In fact, the natural mode JPEG images taken straight out of the camera and slightly sharpened in Photoshop actually had more detail and better contrast than RAW mode images processed using either Photoshop or the supplied RAW conversion utility. Images at 200 and 400 ISO were essentially noise-free, with only a little noise visible at 800 ISO. 1600 ISO was grainy but usable with no colour distortion, although 3200 ISO would be best avoided. 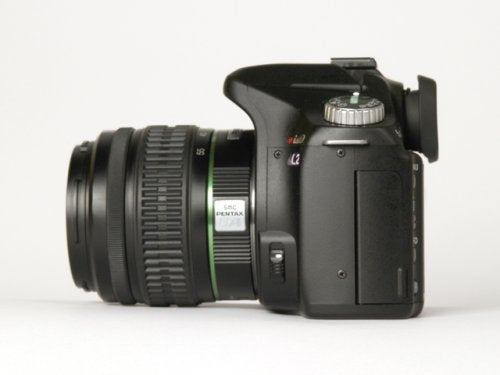 The 18-55mm (28-70mm equiv.) standard zoom lens supplied as part of the kit is very good, especially compared to the sub-standard optics bundled with the Nikon D50. It focuses quickly and accurately, and provides excellent corner-to-corner sharpness and a minimum distortion. It did catch a little lens flare when shooting into the sun, but it is supplied with a lens hood to combat this. Pentax lenses have always enjoyed a very good reputation for outstanding quality with compact size and low weight, and thanks to the K-bayonet lens mount the *ist DL2 is fully compatible with every Pentax lens ever made, including old M42 screw-mount lenses and 645 medium-format lenses via adapters. 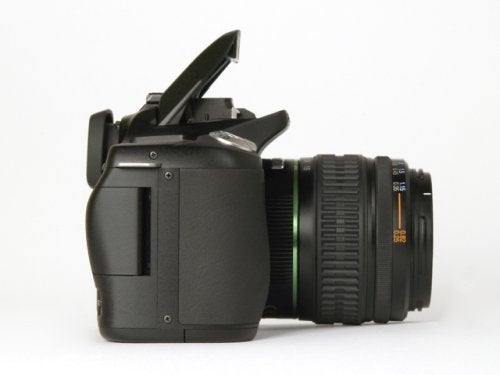 
The Pentax *ist DL2 is bargain-priced entry-level DSLR that combines the ease of use of a compact with the performance and picture quality of an SLR. It may lack some features, but it has all the important ones and even has one or two surprises. Experienced users may find it restrictive, but it is a perfect camera for the beginner who wants to learn, or for those making the switch from compact to SLR. It also gives you access to a vast range of Pentax lenses and accessories. 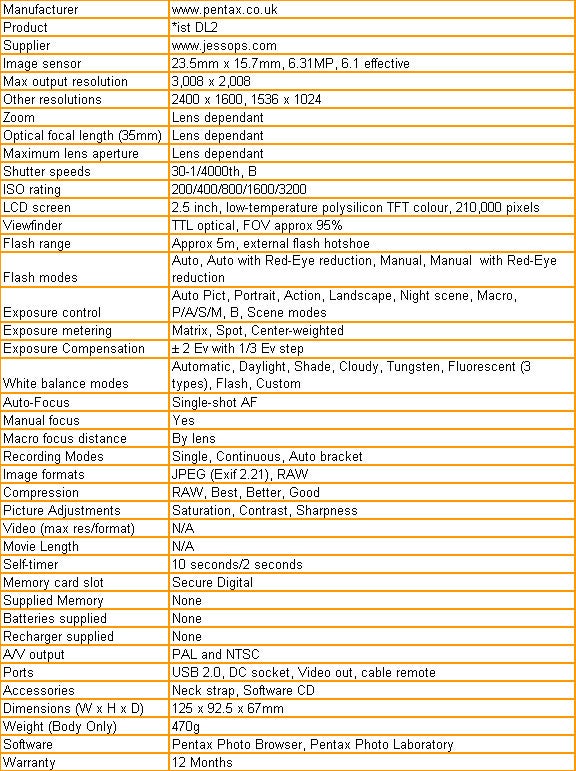 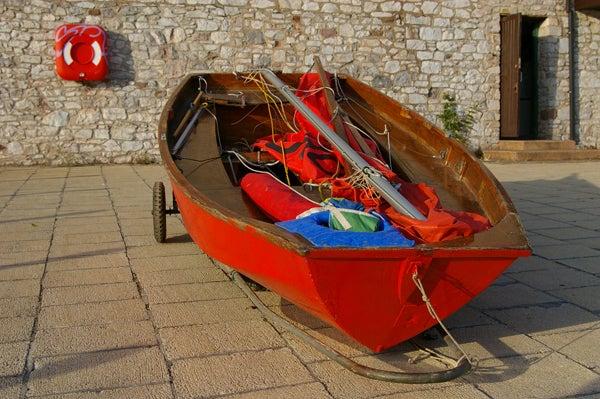 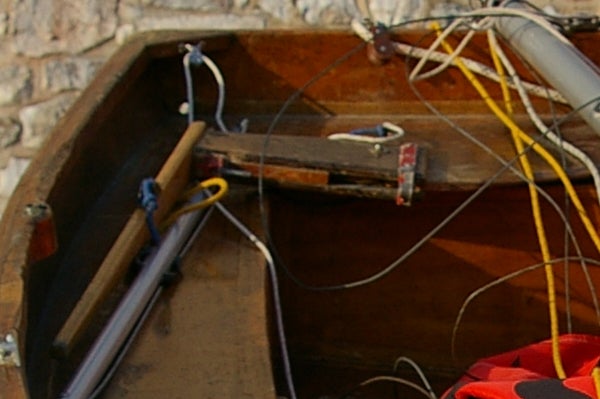 At the lowest ISO setting the ist DL2 produces nice smooth noise-free images, although the red is a bit over-saturated. 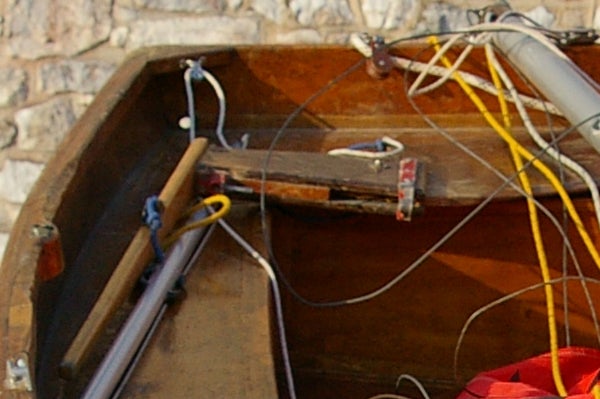 At 400 ISO there is still no image noise, although contrast seems to have been slightly increased. 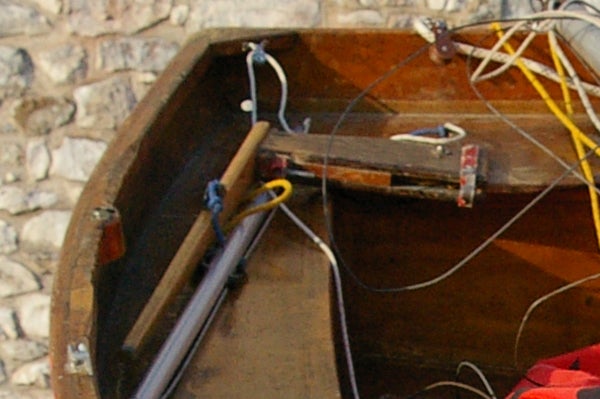 At 800 ISO there is the faintest hint of noise in some mid-tone areas, but the image is still very sharp with good detail. 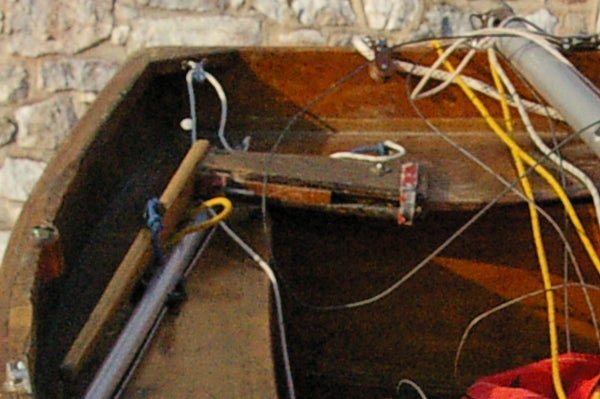 At 1600 ISO there is image noise visible over most of the image, but none of the red-green random speckling normally seen at this speed. 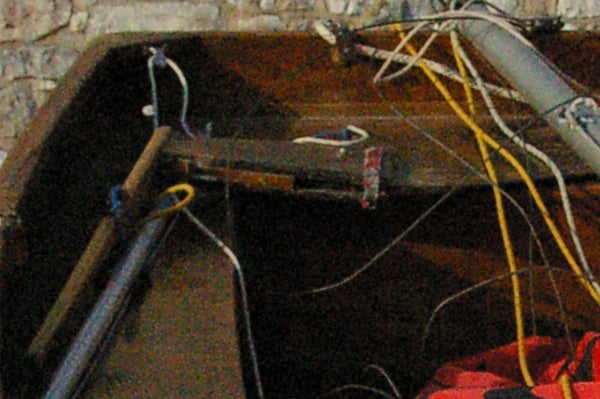 At 3200 ISO there is a good deal of image noise, and colour speckling is clearly visible all over the image. 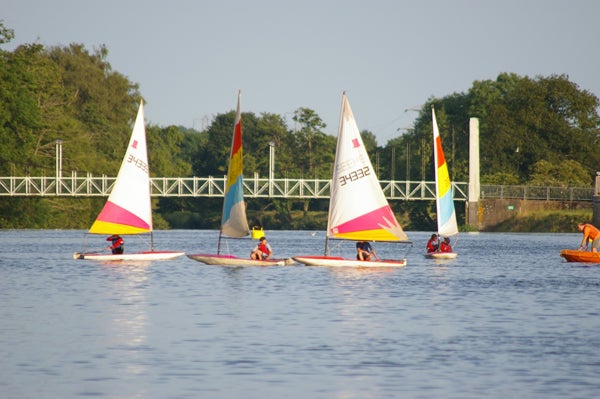 With a good telephoto lens the DL2 becomes a good long-range spotting camera, and is light enough to carry anywhere. This was taken using a 300mm lens. 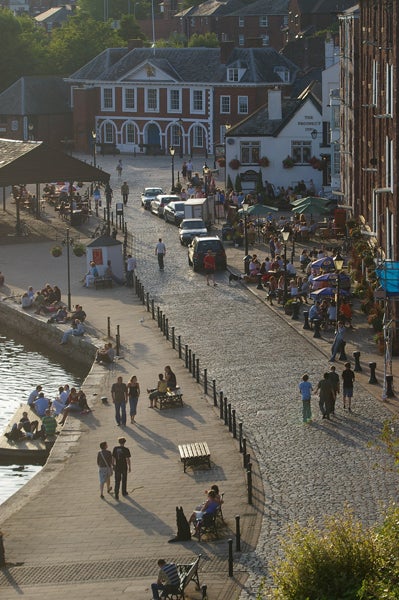 The 18-55mm lens supplied with the kit is roughly equivalent to 28-70mm on a film camera. The telephoto end is a bit short, but the lens is exceptionally sharp and detailed. 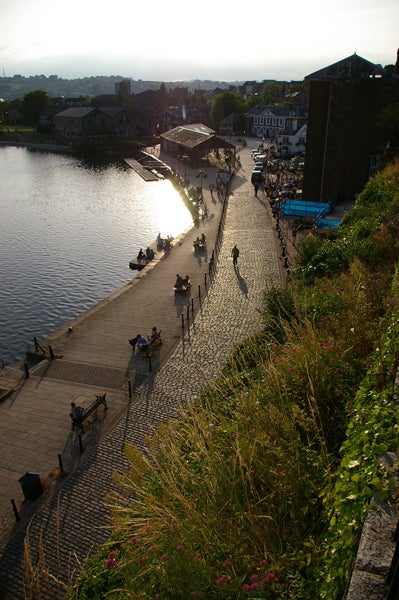 The 28mm end is wider than most compacts, and is great for big panorama shots. Even at its widest setting it provides excellent edge-to-edge sharpness. 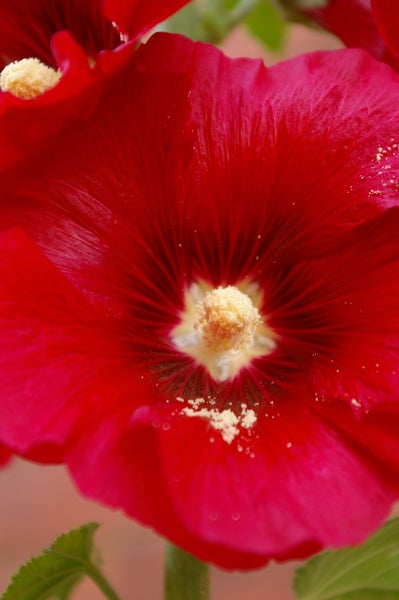 With no selectable focus point, close-up photography can be a bit hit-or-miss. It took five tries to get this, and it’s still not perfect. 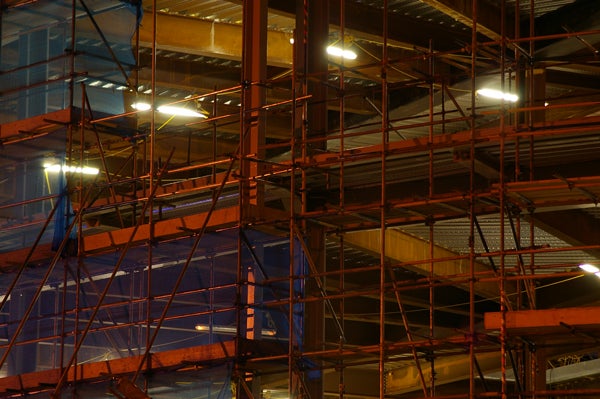 One advantage with a digital SLR is superior low light performance. This was taken using a tripod, vivid mode, and 1.5 secs at F4.5. 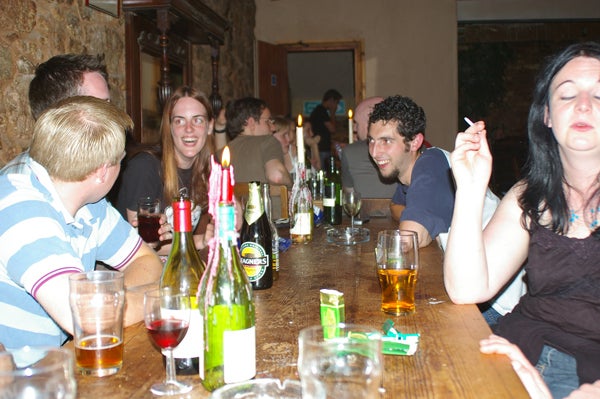 The flash range on the DL2 is extremely good. The back wall of this pub is at least 30ft away. 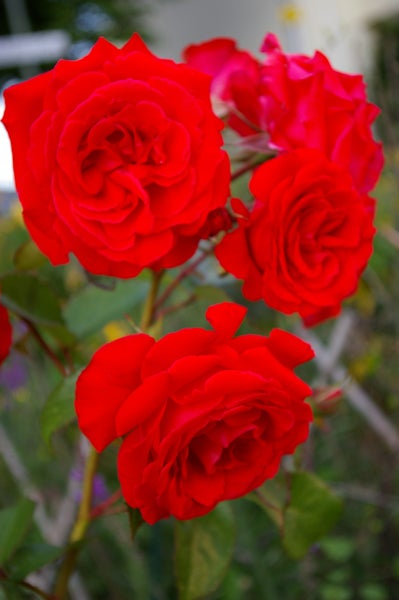 The only real problem with image quality is a tendency to over-saturate reds in bright mode, although there is manual saturation adjustment available.