Handling a mobile phone in the car while you drive has been illegal in the UK since 1 December 2003 – and a good thing too. If you’re holding your phone while driving it inherently means you’re distracted, making the chances of an accident much greater. The fine if you’re caught is currently £30, but currently legislation is being passed that will push that up to £60 and even more damagingly, put three points on your licence.


It’s therefore more important than ever to make sure your calls in the car are all handled hands free. This is where something like the Parrot Minikit comes in.It’s not just for use in the car though. As with any mobile hands free device, it enables you to make and receive calls in your car, home or office, without you having to pick up your handset. 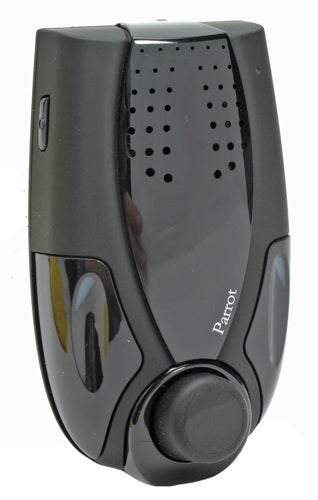 Despite its name, the Minikit isn’t an array of equipment, it’s just one device, though you do get a wall charger and an in-car charger in the box as well. For use in the car a clip is provided that enables you to slip it over the sun visor in your car. Alternatively, this can be removed and you can lay it flat on the desk, leaving your hands free for say typing notes as you talk.


There’s a small power switch on the side, while on the opposite side there’s a DC power in. This is a mini USB connection, which is being used for power more often these days. As the Minikit it’s not as small as a Bluetooth earpiece the battery can afford to be larger. Parrot claims that you’ll get over 10 hours talk time from a full charge, and I didn’t manage to run the battery down during testing of this device. Standby time is listed as over 275 hours – that’s eleven days and it will charge in three hours. When it does get hungry, it will start beeping at you.


There are two buttons on either side that are set flush with the body of the Minikit, with a rotary dial at one end. One button has a green light, while the other has a red light. These are used for accepting or rejecting calls, respectively. The dial is used to raise or lower the call volume, or when not in a call to scroll through the menus of the device. By turning this you can set up the language the Minikit uses, adjust the Volume, send voice tags to the device or use the update service.

When you first power it up it starts up with a little drumbeat, the red and green lights flash and it beeps when it’s connected. It does the opposite when you turn it off. The first time you turn it on it automatically puts itself into pairing mode. You then need to initiate the pairing from your mobile. On first attempt my Sony Ericsson K800i identified it rather strangely as a Nomad 1.01. This must have been some early name for the device as after a firmware update the device was then picked up as the Minikit.


Remarkably, this firmware update can be done via Bluetooth. From the Parrot web site you can download a Wizard that will take you through the steps, but you do have to manually establish a Bluetooth connection between the machine you’re downloading the update onto and the Minikit. It also involves you knowing the port that the connection has been made on. You should be able to find this out from your software though. The main advantage of being able to update the Minikit is to add compatibility with future devices.

Using the Parrot was easy. When I turned it on, my K800i just picked it up and entered headset mode. One disadvantage of a speakerphone is that others in the vicinity can hear your call. If that’s a problem you just press in the green button during the call and the Minikit says the word ‘Discreet mode’ and switches the call back to the phone. Press it again and it returns to the Minikit.


However, to achieve the extensive standby times, the Minikit shuts itself down when not in active use, so if you go out of range and then return, you have to turn it on again. The range of 10 metres is more solid that most devices that claim this. In fact, this caused problems as on occasion if I found myself too close to the car the call would be picked up by the Minikit and I’d have to divert it to the phone to talk.

Parrot has designed into the Minikit features that let you keep your hands off the phone while driving as much as possible. For example, you may need to enter numbers to select menu options, say in Voicemail or in if you phone a company. By pressing and then turning the dial during a call the Minikit reads out numbers, which you can just about hear in the background. Press the dial to accept and it sends thee DTMFs (Dual-Tome Multi Frequency) instructions to the phone. It’s a good feature but I’m not sure it’s actually any safer than pressing the keypad on the phone if it’s properly mounted in a car kit.


Another cool feature is how the Parrot deals with voice control. Firstly, you have to get the Minikit to recognise your commands by setting up generic commands for Home, Work and Mobile. However, though it says Mobile in the manual, the word you’re asked to repeat is actually Cellular – A US term not used in the UK. Once you’ve set up these commands you have to beam the contact from your phone to the Minikit via Bluetooth. It can store up to 150 of these Voice Tags. To get the Minikit to ask you to state a name you press the green button once, then speak – and it then repeats it back to you. Setting up is a bit of a laborious process but it’s worth it for frequently dialled numbers and I found it worked flawlessly. 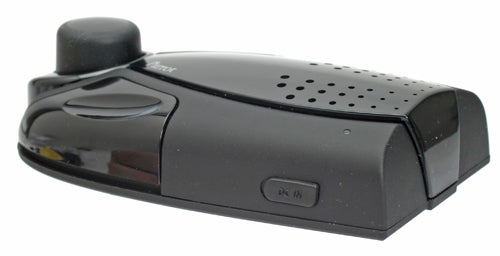 As for voice quality, Parrot claims that it uses complex signal processing algorithms to provide echo cancellation to ensure that your voice can be heard clearly by callers. In fact, the blurb states that these are the result of three years’ development work by Parrot’s design office. I wasn’t aware of this factoid while testing but fortunately, I could always be heard clearly by the other party, even while driving. The 2W speaker is pretty loud and though it could have been a touch more precise I never had a problem making anybody out.


The Parrot Minikit did everything it claimed and efficiently. It’s not the world’s most stylish bit of kit, but it’s practical, effective and reasonably priced and for that it earns a recommended award.