On one level, the Panasonic Viera TX-P60ZT60 could be seen as an act of defiance by Panasonic. A resounding two fingers up at those who like to declare that plasma’s days are numbered.

On the other hand, we guess you could also see the P60ZT60 as a last roll of the dice, where Panasonic attempts to milk plasma’s dwindling fanbase for all it’s worth by finally unleashing all the KURO-esque technology it got its hands on when it picked up Pioneer’s engineers back in the day.

Whatever your take on Panasonic’s thinking with the P60ZT60, though, there are some straightforward facts about it that definitely aren’t open to debate.

First, Panasonic describes the P60ZT60 as using its ‘Studio Master Panel’ – suggesting it takes many of its quality cues from Panasonic’s pro display division.

Next it crucially does away with the ‘air gap layer’ used in all of Panasonic’s other plasma TVs. This layer essentially creates a gap between the glass front and main plasma panel, and in doing so it both causes a ghosting effect during off-axis viewing, and reduces contrast as some light gets redistributed in the journey through the air layer. So by removing this air gap, the P60ZT60’s images can enjoy both more precision (especially with off-axis viewing) and even better contrast than the already sterling efforts we’ve seen before from Panasonic plasmas.

The ZT60 also enjoys dual core processing with Panasonic’s new Hexa Processing engine and ‘3000Hz’ subfield driving to deliver full 1080p resolution with motion while watching 2D images. Also in play on the P60ZT60 is another phosphor process improvement (something Panasonic seems to deliver pretty much every year these days) promising 100,000 hours of use before brightness levels halve.

A rather odd feature of the P60ZT60 being shown on the CES floor was the Touchpen, an optional extra device that lets you draw on and interact with the TV’s screen directly. But we really can’t imagine any domestic user wanting to use this feature more than once, to be honest…

Panasonic wouldn’t be drawn on a likely UK price for the P60ZT60 at CES, but in the US it’s set to command around a $1000 premium over the brand’s VT models.

The first thing that struck us as we started looking at the ZT60 was that its design was pretty crisp by most plasma standards, but still a touch dated when set side by side with Panasonic’s seriously eye-catching new DT60 and especially WT60 LCD models. Next we clocked Panasonic’s new my Home Screen feature. This slickly presented interface personalises the Smart TV experience by letting different members of the family set up their own ‘jumping off’ screens, with their own preferred layouts and content shortcuts.

Slipping into a curtained booth to check out the P60ZT60’s performance on the CES show floor turned up some astonishing results. 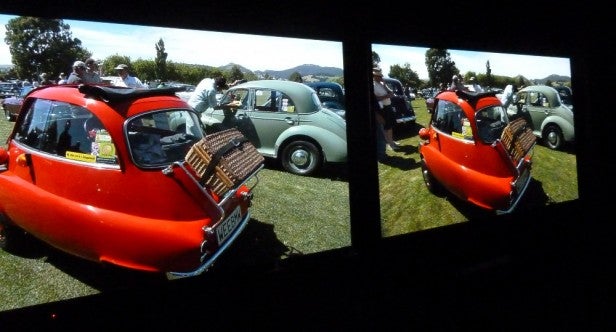 The demo we witnessed had the P60ZT60 running a loop of demo footage alongside one of last year’s excellent VT50 models. And to say the P60ZT60 crushed its excellent (if one year old) sibling would be a huge understatement.

In particular, its black level response was almost unbelievably good. What we’d previously admired as class-leading blacks on the the VT50 were left looking green and grey by the truly immaculate blacks delivered by the P60ZT60. Seriously, the impact of the demo was akin to the gasps of amazement that met Pioneer’s final KURO demo before that company withdrew from the TV market.

Dark parts of the picture also look much cleaner than they do on the VT50 models too, as there’s less sign of the sort of gentle fizzing you can see in dark areas if you get up close to any of Panasonic’s previous plasmas.

Black reproduction is so good, in fact, that it wouldn’t be stretching things too far to say that it gets plasma to a place not far removed at all from the black level ‘athletics’ you get from the new breed of (far more expensive) OLED screens.

It’s worth adding, too, that the P60ZT60’s extra contrast – and, perhaps, Panasonic’s new processing engine – seems to help the picture look more detailed and full of depth than that of the VT50.

The P60ZT60’s colours knock spots off those of the VT50 series, meanwhile. Reds, in particular, are far more rich and natural than they’ve ever looked on any plasma before. But all tones look better, leaving the picture looking more dynamic and punchy.

Shifting our viewing position to down the TV’s sides confirms that the P60ZT60’s method of fixing its glass front straight onto the plasma panel means there’s no sign of the double imaging we’ve long being accustomed to seeing on plasma panels.

Motion looked smooth but natural too, leaving as the only tiny issue we could find with the P60ZT60’s performance some minor dot fizzing on skin tones during fast camera pans.

The P60ZT60 doesn’t use OLED. It isn’t 4k. But it does have the distinction of producing the best picture quality on show at the CES from a TV you might actually have at least a chance of affording.