Everything about the Panasonic TH-103PF9 is massive. Truly, gargantuanly, humungously massive!


For starters, its screen acreage measures in at a frankly terrifying 103in from corner to corner. This makes it not only the biggest TV we’ve ever tested here at TrustedReviews, but also the biggest TV ever sold commercially in the UK. To give you some idea of just how big 103in of TV really is, the 103PF9’s screen will accommodate four 50in TV screens, and still have a few inches spare. Phenomenal.


The screen is as heavy as it is large, too, weighing in at 220kg – an already mighty figure that turns into 350kg if you also use the optional heavy-duty stand. 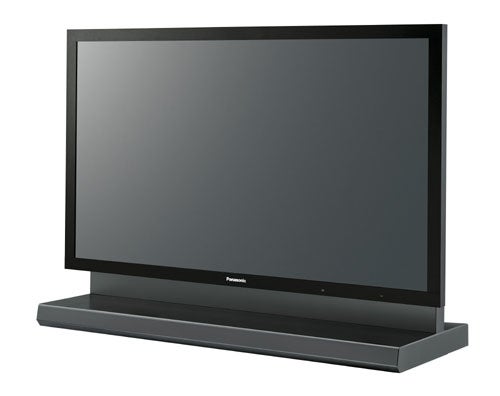 The next massive thing about this plasma screen is the headache involved in getting it installed in your home. Panasonic uses a professional team of AV installers to deliver 103PF9s, but even so it took well over three hours – including an hour with a special ‘interior’ crane – to get the TV installed. And that’s on the ground floor with a door big enough to take the vast box. Any problems of access to where you want the screen to go could potentially add hours to any install – or even present the very realistic prospect of having to get in builders to knock down or reinforce walls.


The last truly huge thing about the 103PF9 is, inevitably, its price. At £46,600, it’s clearly the sort of product that’s only within reach of the mega-rich – or your average Premiership footballer. Then again, adding £50k to our mortgage might not really hurt that much we guess, especially if you go for an interest only deal…


Realising there’s not really any way to make a 103in screen subtle, Panasonic has kept things simple by just sticking a fairly – though not excessively – chunky frame around it and leaving it at that.


The situation regarding the 103PF9’s connections is ‘fluid’, in that you can pick and choose the connections you want as they’re all available on slot-in modules. Options include, of course, HDMI/DVI, component and PC jacks.

Casting an eye down the 103PF9’s specifications, one feature that stands out almost as much as the screen size is a native resolution of 1,920 x 1,080. This makes the 103PF9 only the third full HD plasma screen we’ve ever tested (after Pioneer’s PDP-5000EX and Panasonic’s TX-65PX600). Needless to say we’re pretty excited at being able to experience full HD on a screen of this magnitude – especially as Panasonic has ensured the screen will take native 1080p sources, and can show 1080-line sources mapped perfectly pixel for pixel to the screen’s resolution, with no overscanning.


Still more good news comes from the fact that despite the 103PF9 clearly having more than half an eye on the corporate rather than domestic market, it still features most of the company’s latest video friendly features, including Panasonic’s Real Black Drive system, Motion Pattern noise reduction, and 16-bit colour processing to deliver a claimed 4,096 steps of colour gradation. The set’s contrast ratio, meanwhile, is claimed at 5000:1: way better than we’d expected from such a groundbreaking bit of kit.


Anyway, that’s quite enough preamble. We can’t wait anymore, and have just got to turn our new toy on… 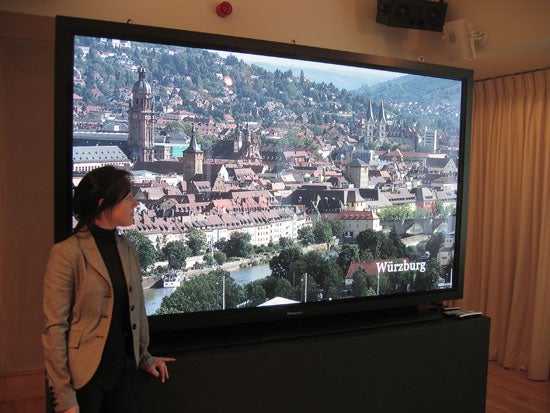 ”’No, she’s not really tiny, the screen really IS that big!”’

Rather superbly, the screen lives up to our sky-high expectations in almost every way. That high contrast ratio claim, for instance, seems borne out by a terrific black level response. Emphatically dark scenes on the Superman Returns HD DVD, for instance, such as the one where Supes spies on Lois Lane’s home at night, look cinematic and rich, thanks partly to the 103PF9’s winning combination of deep black tones, and partly to an uncanny knack for showing even the most subtle of shadow details.


It’s also remarkable how well the 103PF9 deals with traditional plasma technology woes such as fizzing noise over horizontal motion, colour banding and dottiness over dark areas. If a screen as technically difficult to produce as this can do away with these problems, it makes their appearance on ‘normal’ plasma TVs seem all the more unforgivable.


The benefits of the Full HD resolution, meanwhile, are emphatically highlighted by the 103PF9’s combination of quality and sheer size. For instance, good quality 1080-line HD sources look stunningly sharp and fantastically full of texture to a degree you just couldn’t get if the 1080 source was having to be scaled down to a lower pixel count. The lack of scaling processing means there’s remarkably little sign of any video noise either.

We can’t resist at this point telling you just how good the 103PF9 is with our resident Xbox 360 running into it. Seriously, if you thought Call of Duty 3 was intense before, you haven’t played it at all until you’ve had it running on a quality screen the size of this one. Stunning!


You don’t have to be Einstein, though, to figure out that for all its terrific qualities, the 103PF9 is always to some extent dependent on the quality of the sources you feed it. So while it looks nothing short of sensational with a good HD source, it is rather merciless in revealing the weaknesses inherent to standard definition sources.


Still, this speaks more of those sources than it does of a genuine ‘problem’ with the 103PF9. The only actual performance weakness that can be laid solely at the 103PF9’s door is that its pictures aren’t especially bright compared to what we’ve come to expect from ‘regular’ screen sizes – a problem which can additionally make one or two colours look a touch muted. 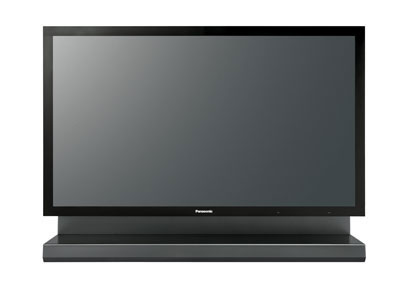 We stressed ‘performance’ weakness in the previous paragraph because there is, of course, one other rather important downpoint of the 103PF9: its price. There’s just no getting round the fact that the best part of 50 grand is a hell of a lot of cash to splash on a telly, no matter how big it is. Especially when you think that you could get a really excellent AV projector to give you even bigger pictures for as little as £3,500.


But hey. The 103PF9 scores over a projector in that you can watch its images in a bright room, and don’t need to accommodate a projector somewhere distant from your screen (usually in the middle of the room).


And anyway, if you’re the sort of person who can even think about blowing £50k on a home cinema screen, justifying that sort of expenditure is probably not something you need trouble yourself with!


The 103PF9 is a truly grandstanding showcase for Panasonic’s plasma and technological prowess, and proves that you really can push back screen size boundaries without picture quality having to suffer.


So dip into your Swiss bank account, do whatever it takes to get one installed, sit back, enjoy your glorious king-sized show and revel in the fact that we all hate you for being so much richer than us!