Setup is simple. You can either mount the soundbar on the wall (all the brackets and screws are in the box) or place it on a flat surface – there are rubber pads fixed to the bottom for the latter. The sub and soundbar are paired at the factory so there’s no need to do it manually.

Operating the Panasonic SU-HTB527, however, is a pain. The problem is that you have to rely on blinking lights to know what inputs, sound modes and formats are selected. And when you want to change settings, you have to hold down certain combinations of buttons, which are easy to forget – keep the manual close at hand. Hopefully you won’t have to fiddle about with the settings too often. 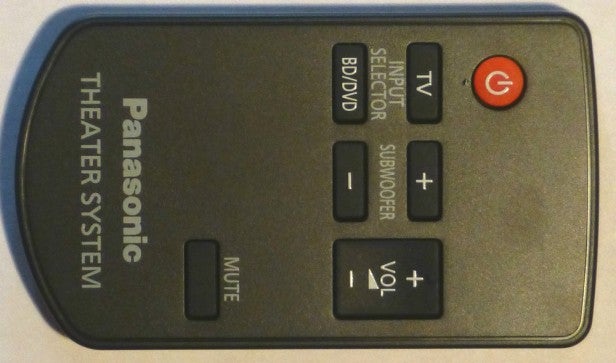 It’s not helped by the small and awkward-to-hold remote, but at least the buttons are sparse and clearly labelled. There are dedicated controls for the subwoofer volume, which is hugely helpful, joined by buttons for volume, input selection and mute.

None of this is a great hardship, but it lacks the sophistication and convenience we expect from today’s AV products. Just putting an LED display on the front would make life much easier.

The Panasonic SU-HTB527 does an excellent job with movies, blaring out a loud, powerful sound that will rock your world if you’re making the step up from a plain old TV.

With a full blooded movie like Avengers Assemble, it delivers action sequences with satisfying muscle and makes effects sound swift and snappy.

At the movie’s climax, when Loki and his army swoop on New York, buildings are smashed up with a forceful crunch and there’s a deep thud when Hulk shoulder barges the huge spacecraft.

Meanwhile, lasers zap around the surprisingly wide soundstage, giving the impression of scale and immersion. That sense is augmented by 3D Sound, which doesn’t quite replicate the effect of rear speakers but makes the stage more expansive.

Amid the carnage, the Panasonic SU-HTB527 projects dialogue with impressive clarity and resolves a reasonable amount of high-frequency detail, resulting in an open sound. We’re not talking audiophile levels of refinement, but it’s not bad.

Just a couple of blots on the copybook – the subwoofer’s bass can sound flabby and overpowering with its volume turned up too high, swamping the soundstage. It also lacks the agility and punch of a dedicated sub, but when adjusted correctly it rumbles happily without drawing undue attention to itself.

The other issue is that the soundbar can sound brash and raspy with excessively loud sounds – screeching or roaring creatures in particular – which gets worse at louder volumes, but it’s not a deal-breaker.

The Panasonic SU-HTB527 is a simple but likeable soundbar, bringing powerful sound into your living room without fuss or clutter. It’s discreet and stylish, and the wireless sub means that cables are kept to a minimum.

It’s light on features, though, with no Bluetooth and limited sockets, plus aspects of the operating system are clumsy – we expected more from a £300 product.

But if you can see past that, then its impressive performance might make it feel like money well spent – particularly if you’re upgrading from TV speakers.