Camcorder manufacturers are continually hunting for new ways to entice you to shoot video. Most are currently trying to ride on the back of Internet sharing, but Panasonic took a different tack last year with its SDR-SW20. Drawing on its Toughbook expertise, this hardened pocket camcorder offered real waterproofing and drop survival. 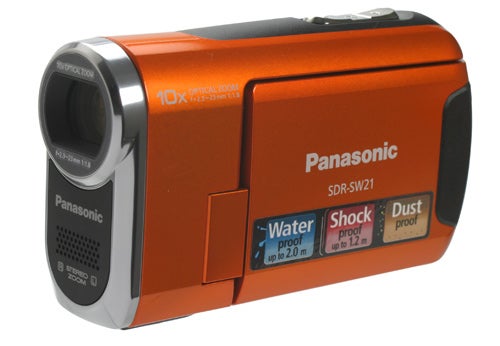 The SW20 gained quite a lot of positive attention, so now Panasonic has released an updated version. Called the SDR-SW21, it has been improved in key areas. In particular, where the SW20 had all the looks of an engineering sample, the SW21 is far less industrial, and comes in a brighter selection of colours. Luminescent orange and yellow versions are available, plus a more sober silver, and all are metallic. 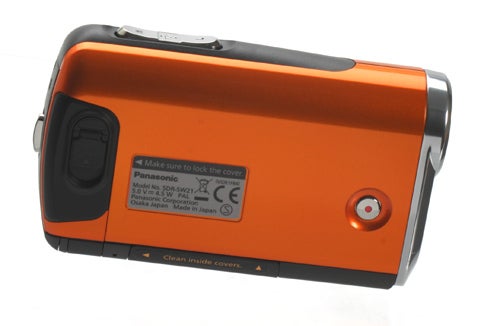 Inside, the SW21 is not significantly different from the SW20, or the SDR-S7 it was originally based on. It still uses a 1/6in CCD sensor with 800-kilopixels, and shoots standard definition video. So our request for a HD version when we reviewed the SW20 remains unanswered. The resolution is always 704 x 576, rather than the usual 720 x 576 of European Standard Definition video, but three data rates are available, ranging from 2.5Mbits/sec to 10Mbits/sec. Footage is recorded to SD or SDHC memory. No media is included in the box, but a 2GB card will be enough for around 25 minutes of footage at the top data rate. 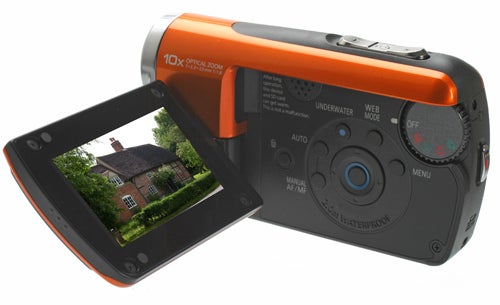 Aside from the improved aesthetics of the SW21, Panasonic has also beefed up the mechanism for securing the watertight doors over the various ports. Instead of just a locking switch, a screw catch now keeps these firmly shut, further reducing any chance of accidental opening. But most importantly, the firmer mechanism also allows Panasonic to increase the waterproof depth to 2m, where the previous model just went to 1.5m. This is particularly welcome when you consider a lot of swimming pools are 2m at the deep end, so the SW21 will be perfectly safe in these environments. 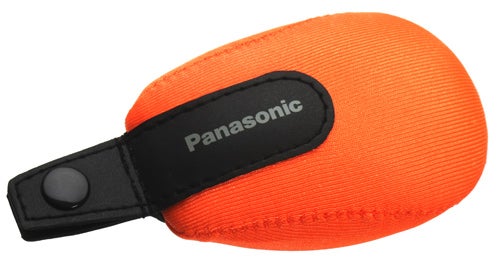 However, the upgraded chassis design hasn’t improved the ability to withstand knocks. The SW21 is still only rated for falls of 1.2m or less, which allegedly conforms to the MIL-STD-810F METHOD 516.5 SHOCK military standard.


Dropping the SW20 in deep water was allegedly a more significant problem. Not only could this mean the camcorder disappeared for good, if you did manage to find it and it had fallen well below 1.5m, its seals might have breached and damage been caused. The new model’s bright colour options will help you find it if you happen to lose your grip. But it also comes with its own matching floatation device, which attaches to the wrist strap. Let go of the camcorder underwater, and this will buoy the SW21 up to the surface, out of harm’s way.

Unfortunately, the waterproofing necessitates an enclosed battery. The 940mAh unit supplied lasts for less than an hour of shooting, and you won’t be able to upgrade to a more capacious alternative. Nor would we recommend switching batteries underwater! 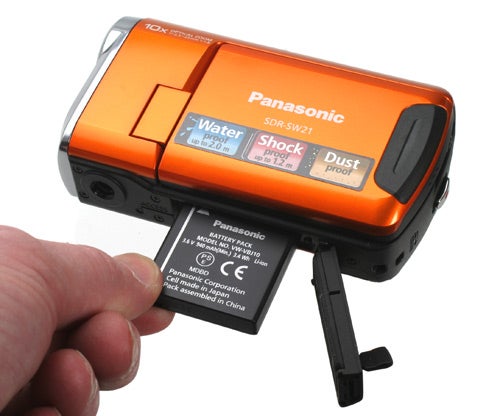 Being a Panasonic camcorder, the SW21 doesn’t skimp on the manual settings, even if you’re quite likely not to have time for careful configuration with such an action-oriented model. The Underwater mode remains, with its own discrete button. This applies colour correction to counteract the effects of shooting through water, as well as filtering the audio of motor noise, which will be much easier to hear thanks to the increased ability of water to transmit high-frequency sound. 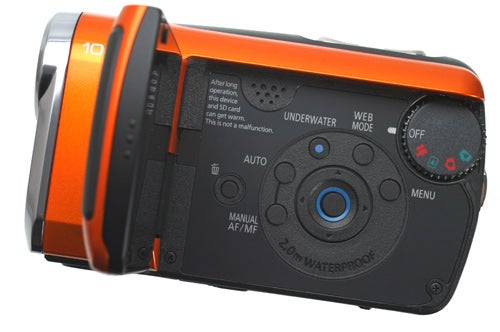 Another button switches to manual mode, with a second press enabling manual focusing as well. Configuring these settings calls upon the cursor wheel under the LCD, and the process is about as easy as you could expect from such a system. Pressing down cycles through the options, with the other directions selecting them. You can configure shutter speed from 1/25th to 1/8000th, and independently adjust the iris from F16 to F1.8. Up to 18dB of video gain can be added once the aperture is fully open. The Soft skin, Colour night view and Backlight compensation modes are also readily accessible from this. The PRE-REC function can be toggled here too. This buffers a few seconds of video at all times, so if you’re a bit late with the record button you won’t miss the shot. 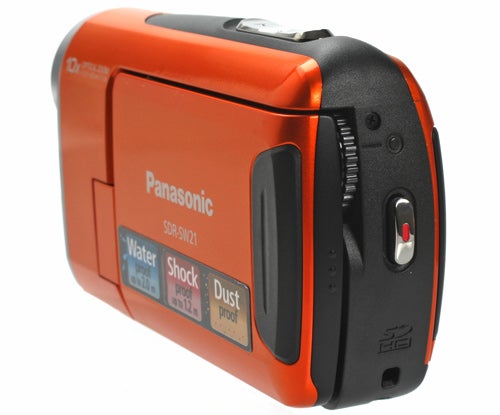 You probably won’t need to enter the full menu unless you need to alter the quality setting or enable a scene mode. The usual five options are available here, including Sports, Portrait, Low light, Spotlight and Surf & Snow. Although extreme shooting conditions are the SW21’s primary focus, Panasonic at least recognised the importance of Internet video and added a Web Mode, which has its own discrete button. This doesn’t change the video resolution or data rate, but ends each recording when it gets to 10 minutes in length.

Since Panasonic hasn’t made any significant changes to the SW21’s sensor or optics compared to the SW20, we weren’t expecting any major differences in performance. In good lighting, it does a similarly adequate job reproducing colour saturation. But the level of detail is marginally better and there is less grain. 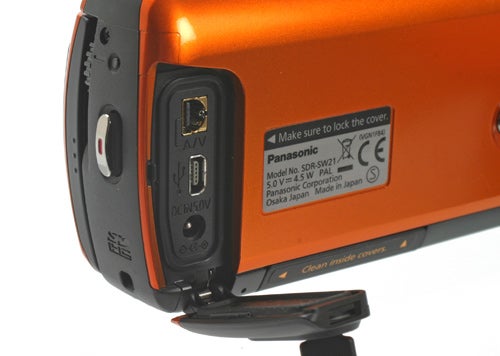 We also noticed a slight improvement in low light abilities, indicating that Panasonic has tweaked the image processing on this model compared to its predecessor. Unfortunately, performance in poor illumination is still not great. Although colour remains reasonably faithful, detail takes a nosedive. This will mean the SW21 won’t be up to dark underwater shooting, such as in caverns or potholing, or possibly even down to its 2m limit. 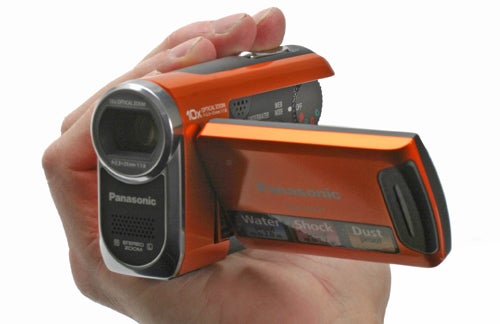 The SW21 incorporates a mini-USB beneath one of its watertight covers. We didn’t have any trouble editing the MPEG-2-based footage in any of the apps we tried. Alternatively, a proprietary connection is available for hooking the camcorder up to a TV via composite analogue video and stereo RCA audio.


Despite its low light limitations, it’s hard not to like the Panasonic SDR-SW21. We were already impressed by its predecessor, and the new model has noticeably improved underwater protection, better looks, and slightly superior image quality. However, the most significant downside is the price. Consumer electronics have been getting more expensive across the board, thanks to the economic situation, but at over £100 more than its predecessor, the SW21 is close to HD camcorder territory. So even if it is the roughest, toughest camcorder out there, now you have to weigh that against whether you want to move up to HD instead.