When the SDR-S7 first emerges from its box, you could be forgiven for wondering if you’ve been sent a toy camcorder by accident. We thought the SDR-S10 was small. But the SDR-S7 will break the line of your jacket as little as a pack of twenty filter tipped, and won’t get you arrested when you fire it up in an enclosed public space either. Yet this is indeed a grown-up camcorder, with most of the features you would expect from a more regularly sized Panasonic. 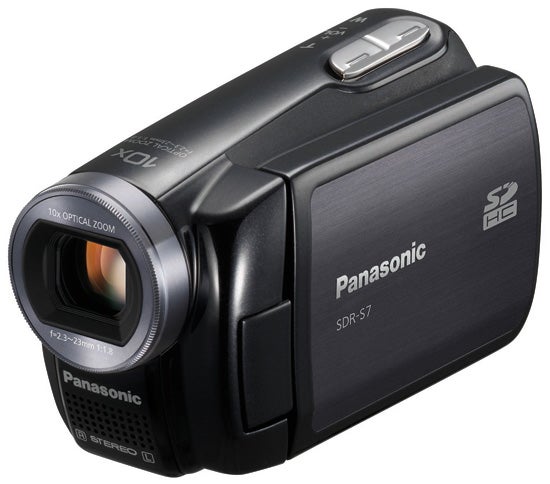 Inside the SDR-S7’s unfeasibly tiny form lurks a single 1/6in CCD with 800-Kpixels. This is a pretty entry-level sensor, frequently found in the cheapest camcorders. It’s used to record standard definition video with MPEG-2 compression. The frame size is 704 x 576, rather than the more usual 720 x 576, and is widescreen 16:9 in aspect ratio by default, although the option to shoot in 4:3 mode is also buried within the menu system. Still images can only be captured at 640 x 480, however, so will be surpassed by many mobile phones these days at least in terms of resolution.


Even though the SDR-S7 is very short, there’s still a 10x optical zoom available. You can add 25x or 700x digital zoom on the top – neither of which we would recommend due to the reduction in video quality entailed. 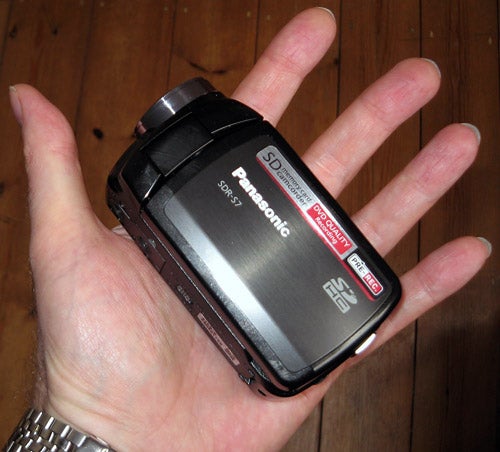 The feature that has primarily allowed the SDR-S7’s incredible shrinking act is SD memory. Thanks to the small size of this format, there’s no need for a hefty tape transport or space for a hard disk. The slot will accommodate SD and SDHC cards up to the current maximum of 32GB in capacity. Data rates for recording range from 10Mbits/sec in XP mode, down to 5Mbits/sec in SP mode and 2.5Mbits/sec in LP. With a 16GB SDHC card, which will set you back around £50, three hours 20 minutes of footage will fit, even in XP mode.


The S7’s small size requires a slightly different shooting strategy to regular camcorders. A second record button is available on the side of the unit. This is a very good thing, because holding the SDR-S7 in the usual handycam fashion, with the thumb toggling recording, is actually a bit uncomfortable unless you have the hands of a seven-year-old.

You wouldn’t expect a camcorder this size to offer much for the video enthusiast, and it doesn’t. There wouldn’t have been room for an accessory shoe without ruining the diminutive proportions – and the S7 would look ridiculous with an external microphone or light on top anyway. There aren’t any minijacks for headphones or microphones either. The battery is also kept internally, so you’re stuck with the 1000mAh unit supplied, which lasts about an hour between charges. But a screw fitting for a tripod is available on the bottom. 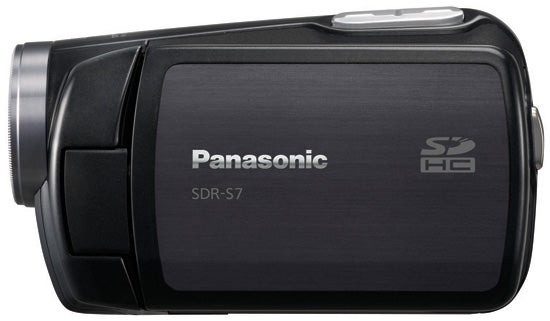 Surprisingly, Panasonic still includes its usual comprehensive range of manual settings. The iris can be varied from F16 to F1.8 (fully open), and then up to 18dB of gain added on the top in 3dB increments. The shutter can be varied entirely independently of the iris, from 1/25th to 1/8000th of a second. All of these functions are available from the cross-shaped array of buttons lurking beneath the LCD. 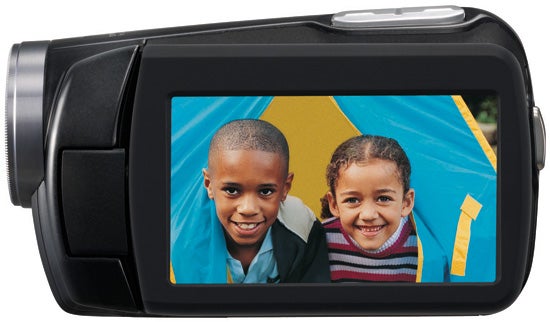 Panasonic has found its Pre-Rec function very popular, so that is available here too. It buffers a few seconds of video at all times, which are tacked onto the beginning of a shot. So even if you’re too late hitting record, you should still get the event you wanted to capture. The Colour Night View, Soft Skin mode, Backlight compensation and White balance functions are also to be found in the same mini-menu system. Hitting the manual button once more turns on manual focusing, which again uses the cross of buttons, so isn’t that easy to use.

A trip to the full menu is required to enable one of the five Scene Modes, which include Sports, Portrait, Low light, Spotlight and Surf & snow. Wind cut and Zoom mic functions can also be turned on here, to help reduce wind noise and peg microphone directionality to the video zoom. What you don’t get is any of the more advanced features now appearing on Panasonic’s higher-end models, such as Intelligent Contrast and Face Recognition. But this is really the kind of camcorder most users will leave in Auto mode virtually all the time and whip out from a pocket for rapid, impromptu recordings.

With its 1/6in CCD, the SDR-S7 wasn’t likely to produce top-notch video quality. But even if this mini monster can’t be expected to offer professional-grade images, it needs to be passable in everyday conditions. It certainly is in bright daylight and even cloudy conditions, with no manual settings required. Colours don’t have the saturation characteristic of Sony models, but are perfectly faithful. Reproduction remains decent in everyday artificial lighting, and performance can be improved by adding gain. However, this does introduce a pink tinge, which worsens as light levels diminish. Video gets very grainy and lacking in colour in the lowest light. Overall, though, the SDR-S7 delivers enough for its target market. You will be able to shoot family events in most situations. 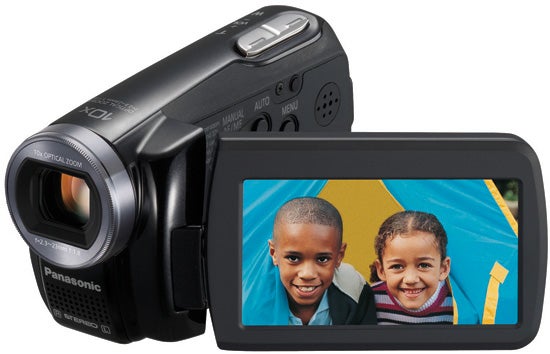 Despite the tiny size of the body, the SDR-S7 still has USB 2.0 and a proprietary A/V connection built in. The cable supplied for the latter only offers composite video and stereo RCA audio, but not S-video. We had no problems importing the MOD files the SDR-S7 produces into Ulead VideoStudio 11.5 Plus and Pinnacle Studio 11.1 Plus. Adobe’s Premiere Elements 4 also supports the MOD format, although there have been reports of problems with JVC’s version of it. But as it is basically MPEG-2, with MPEG-1 Layer 2 audio, editing the SDR-S7’s video won’t pose many problems, although only the Vista version of Windows Movie Maker has the necessary support.


You can’t expect a camcorder as tiny as the SDR-S7 to offer much for the more serious videomaker, and its lack of high definition ability will give it a limited shelf life. But for just over £200, the SDR-S7 packs real camcorder abilities into the kind of package normally associated with cheap and nasty attempts from manufacturers with no experience in the camcorder business. It’s a capable video tool in an extremely pocket-friendly format, for a very reasonable price.