Most manufacturers are winding down their standard definition camcorder ranges. But they are still releasing a few new models for those people left not wishing to make the leap to HD, or who just can’t afford it yet. One of these is Panasonic’s SDR-S50, which sits at the top of the company’s standard definition selection.


Panasonic’s strategy with the SDR-S50 is similar to Canon’s with the LEGRIA HF M31. The basic camcorder specification is very similar to previous models, but higher-end features have been added to sweeten the deal. Like the Panasonic SDR-S26, the S50 has a 1/8in CMOS sensor with just 800,000 pixels.


Such a tiny sensor doesn’t bode well for low light performance, which we’ll come back to later in this review. But it does have one upside. The S50 is able to offer a truly whopping optical zoom whilst still keeping its overall size small. The optical zoom stretches to 70x, and is augmented by an Enhanced Zoom mode which stretches this to 78x. Since the sensor offers more pixels than necessary for standard definition video, the frame can be cropped without going below the necessary total. This does reduce the active surface area, so will marginally reduce light sensitivity, but it won’t noticeably affect detail.

The S50 relies on SD flash memory for storage. Video is recorded in the regular MPEG-2 format used by most mainstream standard definition camcorders, and data rates go up to 10Mbits/sec. This means that a 16GB SDHC card will store more than three hours of footage even at the highest quality setting – ample for most uses. The S50 also supports the new SDXC memory format, so will accept 48GB and 64GB cards, with the latter providing more than 13 hours of storage.

Amazingly for a camcorder at this price, the image stabilisation system is optical rather than digital, so is much more effective and won’t affect image quality detrimentally. Panasonic is even offering its Active Mode, which we first saw in the premium HDC-TM350. This adds an extra layer of jog-resistance on top of the standard OIS, although you can revert to the latter if you want. The Active Mode is particularly effective at smoothing the kind of wobble caused by shooting when walking, and we’re not sure why the original mode is still available as there’s no reduction in image quality. But Active Mode is not quite as good as Canon’s Power IS, as seen in the LEGRIA HF M31, at keeping things steady when zoomed in, even if it is pretty effective. 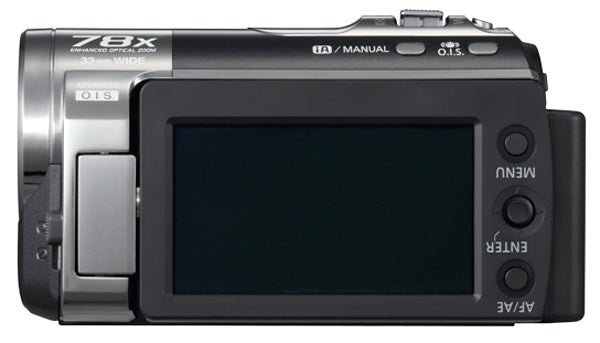 During regular non-manual shooting, the S50 calls upon Panasonic’s Intelligent Auto system. This attempts to detect conditions and set the camcorder accordingly. For example, if faces are detected then the Portrait scene mode will be enabled. When illumination drops below a certain level, Low Light mode will activate instead. Intelligent Auto will even switch to Spotlight mode to capture very bright objects, and use a Scenery setting to avoid blown-out skies in sunny outdoor conditions. 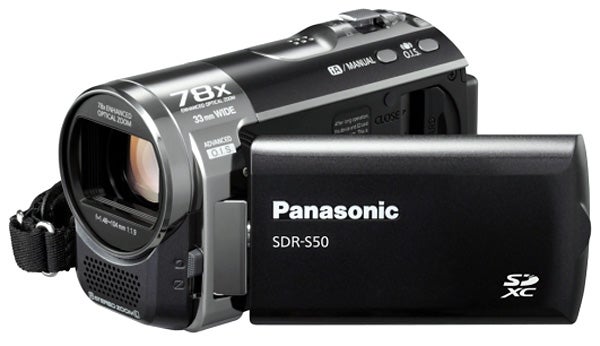 So the S50 does a decent job of making point-and-shoot usage relatively idiot proof. But there are also the usual Panasonic manual settings still available. Switching to manual mode using the button on the camcorder body enables a host of extra functions via the joystick on the edge of the LCD. In particular, the shutter and iris can be adjusted manually, and both can be set independently as well. Panasonic even provides the ability to add up to 18dB of video gain on top of a fully open aperture.


The joystick is also called upon for manual focusing, which as a result is rather fiddly to operate. You can also call up various other functions, such as turning on backlight compensation, or the Intelligent Contrast system which ensures detail is preserved in very bright and very dark regions. Overall, the S50 has a very healthy range of controls, which sets it apart from cheaper Internet-focused pocket camcorders. Naturally, though, you don’t get any enthusiast features like an accessory shoe or minijacks for headphones or an external microphone. You wouldn’t expect them in a diminutive standard definition camcorder at this price anyway.

Perhaps the most surprising feature the S50 has to offer is AF/AE, where focusing and exposure are set via a reference point in the frame. The first, focus-only version of this was introduced by Sony some years ago, and since then both Panasonic and Canon have introduced their own versions. But common to all these implementations is a very significant hardware feature – a touchscreen LCD. This allows you to indicate the reference point by simply pressing a spot within the frame. 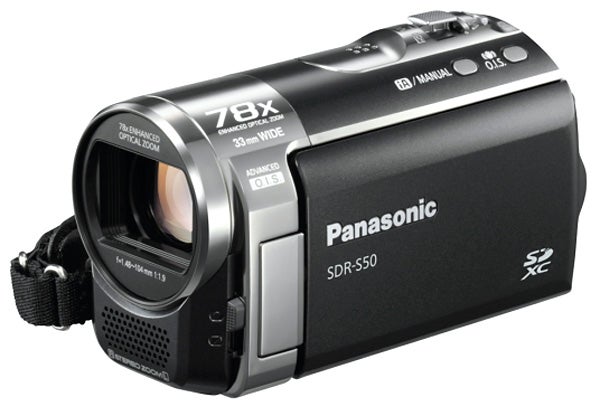 The S50, however, doesn’t have a touchscreen. So its AF/AE system operates in a rather different way. To enable it, you must first be in Intelligent Auto rather than Manual Mode. You then press the AF/AE button on the LCD panel bezel, which calls up a target square in the centre of the frame. This must be positioned over the object you want to use as reference for focus and exposure, either by pointing the camera or moving the object so it’s central. A second press of the AF/AE button then sets this as the reference, after which it will be tracked as it moves. It’s a much more involved process than the touchscreen method, but it does the job. Seeing a feature like this in a camcorder costing under £250 is really quite amazing.


Not quite so amazing is the S50’s image quality, which isn’t significantly different from previous Panasonic standard definition models. In good lighting, colours are naturalistic and there is an acceptable level of noise. But the small sensor makes itself evident in low light, where colours become muted and ill-defined, with a general fuzzy grain across the picture. Most standard definition camcorders in this class perform similarly, so the S50 is not particularly bad relative to the competition. But, unfortunately, if there’s one area where the lower budget has made an impact, it’s here.


The Panasonic SDR-S50 is a relatively commendable camcorder. At £250, there are a number of decent competitors which are cheaper, such as our current favourite at this level, JVC’s GZ-MS120. But the SDR-S50 is sure to drop in price, and it has the edge over other models in its class on features. So if your budget can’t stretch to HD, but you still want a well specified camcorder, this is definitely one to consider.