Convergence has been one of the watchwords of the computer revolution. But although camcorders have been able to take photos for years, and most digital cameras have a movie recording function, no device yet has truly mastered both domains. Camcorders are too big to compete with pocket cameras, and cameras too small to accommodate the storage requirements of video. Weighing in at under 200g, however, Panasonic’s SDR-S10 certainly looks like it could be a contender for the convergence crown. 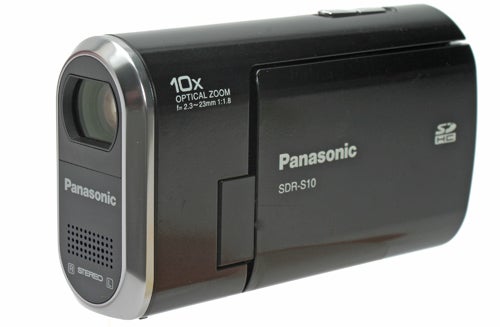 The SDR-S10 has been widely touted as the world’s smallest camcorder. It owes its diminutive size to its use of SD memory for recording, which Panasonic has been championing in its camcorders for some years. The S10 comes with a 2GB card as standard, but as it supports Class 2 or higher SDHC, cards up to 8GB in capacity are now available with larger sizes on their way. Video is recorded in MPEG2 format at regular TV resolution up to 10Mbits/sec. So the supplied card is enough for 25 minutes of video at the top XP quality setting, or a more useful 50 minutes using the middle SP mode. 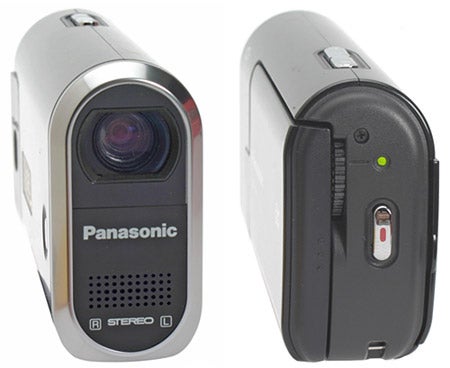 We shouldn’t get your hopes up too much this early in the review, however. The S10 is not endowed with a megapixel CCD, the likes of which you would find on Panasonic’s Lumix range of digital cameras. Instead, it incorporates a 1/6in 0.8-megapixel sensor. This is perfectly adequate for video, but only takes photos at 640 x 480. So in reality the SDR-S10 is not the perfect crossover device its tiny proportions would imply. It’s really just a camcorder the size of a pocket camera, although it still offers a healthy 10x optical zoom. 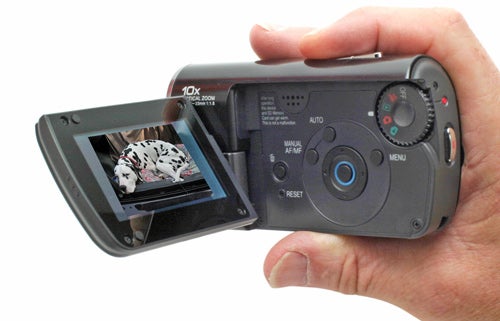 The form factor of the S10 is also a little strange, and we had trouble getting used to it. The idea appears to be to hold the camcorder in the palm of your hand like a Dictaphone, using your thumb to control the zoom rocker and forefinger to operate recording. It’s certainly operable like this, but is a novel approach and forces you to shoot from just above waist height rather than the head height most people will be familiar with. We also found this arrangement particularly uncomfortable when taking photos – although with 640 x 480 stills this will be a very occasional function. There’s no lens cover, either, where a built-in one would have been appropriate. On the plus side, only a few seconds separate turning the unit on and being ready to shoot.

The SDR-S10 has a reasonable range of camcorder functions. A manual focus mode is available, and controlled via the menu buttons, which is fiddly but usable. The standard manual mode lets you control the aperture from F1.8 to F16 and then fully closed. You can also add up to 18dB of video gain to a fully open aperture. Shutter speed can be varied between 1/50 to 1/8000 sec in movie mode, and to 1/500 in photo mode. White balance options cover the standard fully automatic, tungsten, daylight and manual modes. There are also the usual five programme auto-exposure settings, including sports, portrait, low light, spotlight, and surf & snow. Wind cut and zoom mic audio functions can be enabled too. 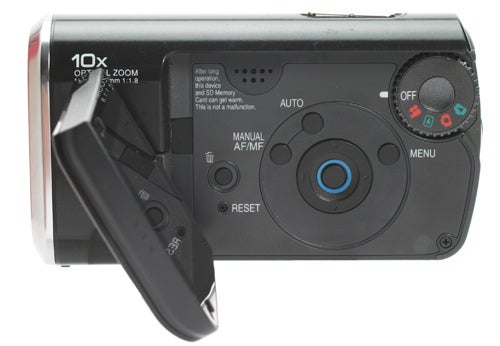 Although the manual settings are perfectly adequate for a camcorder in this class, that’s as far as it goes. A screw mounting is available on the bottom for tripod use, but there is no microphone input, no headphone jack, and no accessory shoe. The memory cards also load from the bottom, so if you need to swap cards when using a tripod you will need to unscrew the quick-release shoe first. 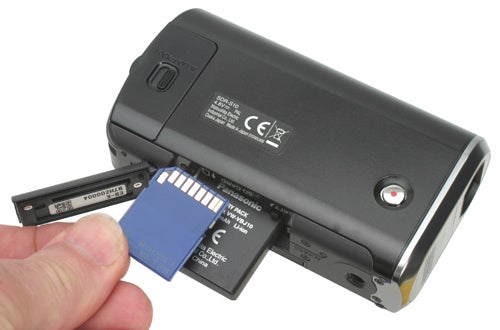 With its single 1/6in sensor, the SDR-S10 was never going to offer high-end video quality. But we found the results surprisingly decent. Under daylight conditions, colours were faithful and noise not particularly evident, even in SP recording mode. We were also impressed with the S10’s ability to cope with low light, where it opened the aperture and bumped up the gain, which resulted in some grain but nothing the average consumer would find intolerable. However, the electronic image stabilisation became very sluggish in poor illumination. 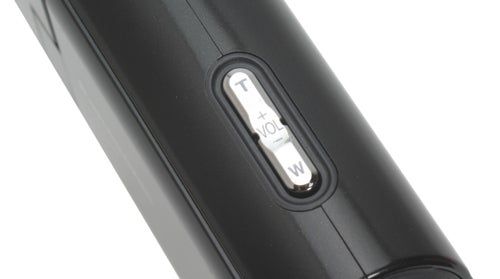 The S10 also scores reasonably highly for editing compatibility. There’s a proprietary AV jack with breakout cable for composite video and RCA audio connectivity, but USB2.0 is the main interface for hooking up to a computer. Unlike most camcorders, the S10 won’t allow you to connect it to a PC unless it is on AC power. This is a good safety measure, considering the battery lasts under an hour. Once connected, the S10 shows up as a removable storage device and its files are readily accessible via drag and drop.


The Panasonic stores its MPEG-2 video in the MOD format which we first came across in JVC’s Everio. Although it wasn’t straightforward to edit back then, most mainstream apps now support MOD files so there should be no issues dealing with footage from the SDR-S10. We were able to import the files into Adobe Premiere Elements 3 and Ulead Video Studio Plus 11 without a hitch. MotionSD STUDIO 1.2E is supplied for Windows users, but nothing for the Mac. 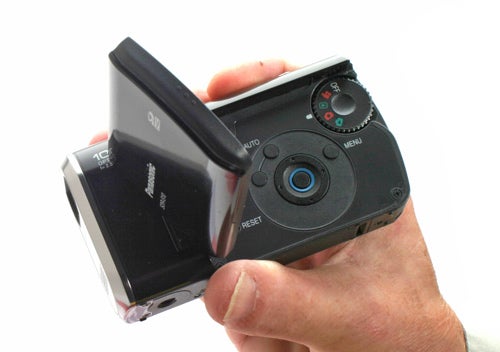 The SDR-S10’s size makes it the most pocket-friendly true camcorder we’ve yet seen. Video quality is still perfectly acceptable for the intended market, although there are insufficient features for the enthusiast. The lowly digital camera resolution also feels like a missed opportunity to create a killer convergence device, and the 25-minute recording time at top quality settings is also somewhat miserly – you’d still only get 100 minutes with an 8GB SDHC card.


At under £300, though, the SDR-S10 manages to pull of a bit of a coup. Normally, you would expect to pay a premium for the gadget desirability of a camcorder like this. But the price puts it amongst the lower end of the DV camcorder market. Now that you can buy 8GB SDHC cards for just over £50, the format is starting to look like an affordable option. So for a very reasonable price, the SDR-S10 really is a respectable camcorder you could carry in a trouser pocket without people asking if you were pleased to see them. And it’s water resistant, too!