Panasonic’s Blu-ray juggernaut thunders on with yet another 3D-capable system from its extensive range. This time it’s a 2.1-channel affair that takes the blueprint laid down by the SC-BTT262 and throws in a load of extra features for around £70 extra.

One of the biggest differences is the design of the stereo speakers. Whereas the BTT262’s are one-way with a single full-range driver, the BTT362’s are a two-way design with a tweeter and midrange driver, which could make a real difference to performance. The speaker cones use Panasonic’s Anti-Distortion design, which gives them an uneven thickness towards the back that’s supposed to suppress resonance.

The external design is also different – for starters, they’re taller, the lines are curvier and the tabletop stands are circular as opposed to square. However, they share the BTT262’s lustrous gloss-black finish.

Another difference is the subwoofer, which is downward firing as opposed to the BTT262’s side-firing model. 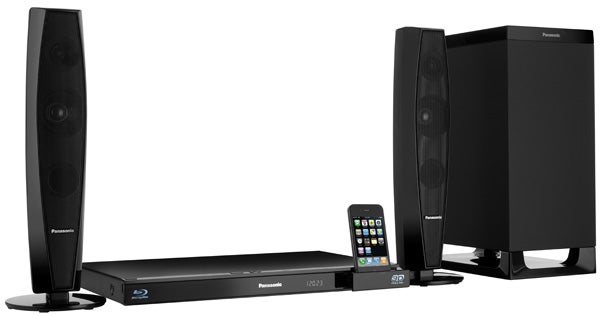 This system also uses an identical-looking Blu-ray receiver to the BTT262. At 38mm high, it’s a slim unit, not much bigger than one of Panasonic’s latest Blu-ray players, with a stylish black finish. The fascia is kept nice and clean with a flap that drops down to reveal the disc tray, a USB port, SD card slot and a couple of playback controls.

But the most alluring feature on the fascia is a pop-out drawer that houses the built-in iPod/iPhone dock. This, along with the ability to play various multimedia formats from USB devices and SD cards, makes the SC-BTT362 a terrific all-round entertainment hub.

On the back of the main unit is an excellent array of sockets. The HDMI v1.4 output zaps 3D pictures to your TV and supports ARC (Audio Return Channel), while the two HDMI inputs (not found on the BTT262) turn the system into a switchbox, passing external sources to a single input on your TV even when the unit is in standby. This Standby Pass Through function (yes, it has a name) isn’t a headline grabber, but could actually save you a lot of hassle.

You also get optical digital and analogue stereo inputs, composite video output, an Ethernet terminal and a second USB port for the Skype camera (see next page).

One of the biggest benefits of paying the £70 premium for the SC-BTT362 is that you get built-in Wi-Fi. That means you don’t need to connect a cumbersome Ethernet cable or faff about with expensive USB adapters – simply hook up with your wireless router using the quick access point search and you can stream media from PCs, download BD Live extras and access Panasonic’s Viera Cast web portal.

Viera Cast provides access to a group of Internet applications, including YouTube, Picasa, Dailymotion, Bloomberg and Twitter. Not a great selection when compared to Sony or Samsung’s latest web widgets (roll on Viera Connect) but Viera Cast’s worth has been considerably boosted by the addition of Skype video-calling. It’s a lot of fun to play with and presented in a series of lively, simple menus. 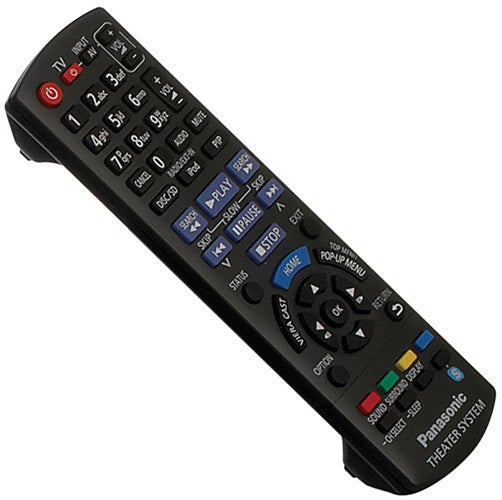 As well as chatting with other Skype users anywhere in the world, the system will also play an answering message when you’re not there and allow people to leave messages on an SD card (although the firmware will need updating for that). On the downside, you need to buy Panasonic’s TY-CC10W communication camera to use the feature, which could set you back around £120.

You can also use the BTT362 to stream media from networked Windows 7 PCs, as well as remotely accessing programmes stored on the HDD of a Panasonic DIGA recorder. The system supports DivX HD, MKV, MP3, JPEG and MPO formats from USB devices, plus MPEG-2, AVCHD, JPEG and MPO from SD/SDHC/SDXC cards.

Elsewhere you get all the other features that we’ve already checked out on Panasonic’s other systems and players, such as Digital Tube Sound, High Clarity Sound and a range of DSP modes including H.Bass, Subwoofer Level and 7.1-channel Virtual Surround. And as expected it’ll decode Dolby TrueHD and DTS HD Master Audio (even though you don’t get the full 7.1-channel benefits), while the Clear Sound Digital Amplifier musters 520W of power (2 x 160W for the fronts and 200W from the sub).

Last but not least the system will also convert 2D movies into 3D, and there’s a range of adjustments for 3D viewing, including depth, screen type and screen frame settings. The latter adds a diffused border around the picture, supposedly making it easier to watch, but we find it a little distracting.

Installation is over in a matter of minutes thanks to the colour-coded speaker cables, although you do have to screw the stands onto the front speakers. Panasonic’s new onscreen menu design makes the SC-BTT362 a dream to use. The graphics are stunning, showing a grid of hi-res icons that make it easy to find any of the system’s functions. The BTT362’s main menu lacks the one-touch simplicity of Panasonic’s standalone players because there are too many functions to make it work. So you have to select what you want and hit enter, but it works so slickly that it’s really not a problem.

In fact, we really can’t fault any of the displays or the remote, as Panasonic’s tried and trusted formula of chunky buttons, large lettering and an intuitive layout has been deployed to great effect once again.

Although the SC-BTT262’s sound could have done with a little more oomph during hectic action scenes, we were still impressed by what it had to offer. So we’re hoping that the upgraded speakers and subwoofer used by this step-up system can take its performance to the next level.

To find out, we pushed it in at the deep end with chapter 12 of Hellboy II: The Golden Army, a frenzied battle between Hellboy and a massive CG plant near Brooklyn Bridge. And sure enough, its reproduction of this spectacular scene is a real treat, making up for its lack of rear speakers with a fast, forceful and surprisingly smooth two-channel performance.

The first thing that we noticed is the crispness of the overall sound. The use of a separate tweeter inside the front speakers allows high-frequency effects to materialise with greater clarity than the full-range speakers of the BTT262. You can hear it in the elegant, undistorted reproduction of smashing glass and cars being crunched in the creature’s tentacles, which really fizz, while subtle top-end sounds like the delicate rustling of growing plant life in the wake of the battle are clearly audible. This has the effect of making the sound feel airy and natural at all times.

It also handles Avatar’s pivotal action scenes with panache – the Battle for Pandora scene is an explosion of piercing effects, solid bass and clearly audible dialogue that doesn’t get swamped by the sounds going on around it.

The action is also bolstered by a decent performance from the subwoofer, which delivers pounding bass that doesn’t overpower the other speakers. It also seems more controlled and tighter than most passive subs. You’ll need to up the sub’s setting to level 2 or 3 to really make its presence felt, but when you do, it melds cohesively with the fronts and provides satisfying depth – not only with obvious stuff like explosions, but it also pads out subtler ambience and music.

The only major flaw is that it’s not particularly happy with the volume up high. We cranked it up to over 70 per cent and it loses its admirable composure, with some of the effects in the scenes above sounding harsh and whiny. Keep it to a more reasonable level though and you won’t have much cause for complaint.

The system also makes a terrific music player. We tried out music from CD, a USB devices and an iPod, and it conveys tunes with pleasing balance and agility. We don’t recommend using it without the subwoofer though, as the front speakers alone don’t deliver the necessary bass depth or warmth to hold it all together. The six(!) Digital Tube Sound modes add a pleasing sense of ‘fullness’ to music playback making it a worthwhile feature if you’re a big fan of vacuum tube amps but can’t afford your own one.

Picture quality is astoundingly good. The arsenal of on-board picture tech – primarily Adaptive Chroma Processing, which gets colours looking life-like and nuanced – come up trumps yet again, producing natural, crystal-clear hi-def images with superb shadow detailing, smooth shading and no artefacts. 3D pictures share these qualities but look even more absorbing thanks to the excellent layering effect and complete lack of crosstalk and blurring. But as noted on Panasonic’s other systems and players, the 2D-to-3D conversion tech is hit and miss.

There are several reasons why you might opt for a 2.1-channel system over 5.1 – spatial constraints or a deep loathing for clutter being two of them. Whatever the reason, we don’t think you’ll find many better 2.1 systems than the SC-BTT362. It boasts a phenomenal feature list, which gives even Samsung a run for its money – 3D playback and Skype are the star turns, but DLNA networking, wide format support, Viera Cast and a built-in iPod dock is a pretty decent supporting cast. It also boasts one of the best operating systems in the business and its sound and picture performance are impressive – certainly superior to the cheaper SC-BTT262.

Our only reservations are that the system struggles at high volumes, the selection of sites on Viera Cast feels limited next to its rivals and the fact that the Skype camera adds over £100 to the price tag. But these things don’t greatly detract from the quality of the overall package and as such it earns two thumbs up.