The Panasonic SC-BTT290 is a 5.1-channel Blu-ray system that packs a 1000W 3D Blu-ray receiver, five compact satellites and a passive subwoofer into a single box, getting you a complete home cinema kit in one go without having to shop around for separates. It’s the step-up version of the SC-BTT190, throwing in a few extra features for a £49 premium, and is two rungs down the range ladder from the flagship SC-BTT590.

Design
There are some cosmetic differences between this and the entry-level SC-BTT190. This time there’s a flap on the front panel, which covers up a couple of buttons (play and stop), plus the USB port and SD card slot. On the right-hand side is an integrated iPod/iPhone dock tray (not found on the SC-BTT190), which pops out when pressed. The aluminium bodywork elsewhere is pleasing, bringing a sense of solidity to the back end. There are a few buttons dotted along the top of the fascia, while an LED display on the front gives pertinent information in large digits.

The speakers’ compact dimensions make them easy to fit into the living room, with each one measuring just 139mm high, while the gloss black finish brings a touch of class. Inside, they sport a 6.5cm full range driver. The centre speaker is longer and horizontally configured to fit in front of your TV. They look terrific, but a manual inspection reveals that the cabinets are light and plasticky, which doesn’t inspire confidence in their performance.

Connections
The rear panel houses a better line-up of sockets than the SC-BTT190. This time you get two HDMI inputs, which make it easy to run other components like digital TV boxes and games consoles through the system. You also get optical digital and analogue stereo inputs, an HDMI v1.4 output, an Ethernet port, an aerial input for the FM radio and a composite video output. What’s more, this time round the second USB port can be used exclusively for the optional Skype communication camera as the Panasonic SC-BTT290 comes with built-in Wi-Fi.

The SC-BTT290 is also compatible with Panasonic’s SH-FX71 wireless kit, which lets you beam rear channel information from the main unit to a receiver at the back of the room. This means you won’t have to conceal any long cables runs.

Features
The Panasonic SC-BTT290 spins 3D Blu-ray discs, as well as DVDs (upscaling them to 1080p) and CDs. You can also play your music, video files and photos from USB storage devices hooked up to the front port, and there’s decent format support too, with a list that includes DivX, MKV, MP4, JPEG, MPO, FLAC, MP3 and WAV. From SD cards, you can play AVCHD, MP4, MPEG-2 (SD Video), JPEG and 3D MPO photos.

The system is also DLNA-certified, which means you can stream content from Windows 7 PCs on your home network without having to physically plug in a device (except MKV, which can only be played from USB devices). With built-in Wi-Fi, accessing these features is much simpler – simply search for your router in the list, punch in your encryption key and you’re good to go.

You can stream from non-DLNA devices like NAS drives using the separate Network Drive function, while owners of Panasonic DIGA recorders can even stream TV recordings. Smartphone or tablet owners can stream content to their device from a server using the Panasonic SC-BTT290 as a renderer. 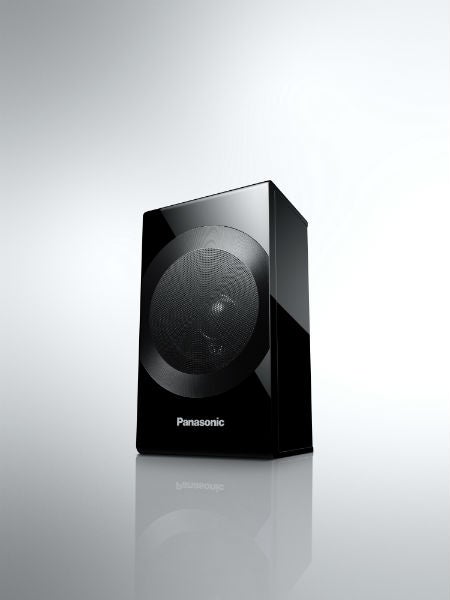 Other sound modes include Digital Tube Sound (designed to replicate the sonic characteristics of a vacuum tube amp); a range of EQ settings; H.Bass; subwoofer level presets; Centre Focus and High Clarity Sound Plus, which shuts down video circuitry to improve audio performance. There’s even a bunch of presets and enhancements for finding the perfect picture, including some specifically for 3D playback.

The Panasonic SC-BTT290 also offers Viera Connect, an internet content portal that brings BBC iPlayer, Netflix, YouTube, Skype, Acetrax, Facebook and Twitter to your TV. Other portals offer better content, such as the Sony Entertainment Network, but on the whole this is an impressive group of apps – plus you can add new ones from the integrated Market. Our only gripe is the layout, which splits apps over several pages and feels long-winded.

Operation
That said, the rest of the onscreen menus are impressive, particularly the Home menu, which arranges all the key functions into a grid of cute icons. Panasonic’s standalone players arrange these icons into a cross, which correspond to the direction pad on the remote, allowing you to simply press up, down, left or right to select the option. That system is missing here because there are nine options in the grid, so you have to select the one you want and press ‘OK’.

The Multi-User Mode allows different users to personalise the look by adding photo icons and wallpaper and registering smartphones. You can select users with the coloured buttons, by detecting registered smartphones or through facial recognition with the communication camera connected.

Not all of the menus are as pretty – the grey/yellow media playback menus could do with sprucing up, but in their favour they’re clear and easy to follow. The Options menu is a very useful tool, allowing you to make setup changes without stopping the movie. You’ll have absolutely no problems rigging up the system for the first time thanks to the colour coded cables and the onscreen menus that guide you through all the key settings when you first power it up.

Using the remote is child’s play, with the large rubber buttons, clear labelling and a foolproof layout making navigation feel intuitive. And the best part is that there’s no touchpad to complicate matters.

Performance
Much like the SC-BTT190, the Panasonic SC-BTT290’s performance mixes the good and the bad, but it’s certainly not ugly. It uses the same satellites and subwoofer, the same audio processing (Anti-Jitter Digital Amplifier and 3D Cinema Surround) and offers the same total power output (1000W) as the BTT190, so it should come as no surprise that it also shares the cheaper system’s strengths and weaknesses.

The main shortcoming is a lack of composure when pushed to the sort of volumes that most dedicated compact systems can handle in their sleep. With a blockbusting Dolby True HD soundtrack like Super 8 on Blu-ray – in particular the incredible train crash sequence in chapter 3 – the SC-BTT290 gets stuck into the action with enthusiasm, but crank up volume past half way and the more aggressive effects get a little shouty and harsh, such as the train carriages hurtling into each other with a metallic crash. They have that unmistakably roughness in the mid and high frequencies that blights many budget Blu-ray systems. We can’t criticise the Panasonic too harshly for this – after all this system packs in so much for the money elsewhere that some sonic compromises are inevitable – but it’s worth bearing in mind if you come expecting the very finest home cinema sound quality.

The other slight drawback involves the subwoofer, which does a decent job of bulking-out the bottom end but gets a little unruly at times and threatens to overpower the satellites if you don’t tame it adequately. There’s a choice of Subwoofer Level settings (1 – 4) and an overall volume control in the channel level options, but being a passive sub you don’t get the same level of control as an active model over how it works with the acoustics of your room or how it integrates with the satellites. Luckily it fuses pretty well with them anyway, ensuring a unified sound.

Put these drawbacks to the back of your mind and you can start to appreciate the Panasonic SC-BTT290’s positives. It’s certainly enthusiastic, relaying the movie’s effects with decent dynamic thrust and pinging effects around the soundstage like Nadal on the baseline. The soundstage is open and expansive, a quality that’s enhanced greatly when you activate 3D Cinema Surround, a sound mode that’s revolutionary in that it’s actually worth switching on. The soundstage envelops you more, appearing to expand further in the horizontal and vertical planes, and gets a bit of a volume boost.

We’re also impressed by the crispness of the sound during quieter moments, as the system teases out delicate high frequency detail in the back and foreground. Dialogue also comes through loud and clear, allowing you to keep up with essential plot developments even during action scenes. It misses out the tiny licks and nuances of the human voice that more proficient (i.e. more expensive) speakers pick out, but speech never sounds muffled.

The system’s picture performance, like all of Panasonics 2012 Blu-ray players and systems, is exemplary, offering the sort of emphatic detail, sharpness and colour vibrancy that we’ve come to expect from the wizards at Panasonic Hollywood Labs. It’s backed up by superb colour and shading subtlety, a beautifully-judged contrast level, smooth 24Hz motion and precious little noise. 3D images take things to the next level, adding a gorgeous sense of depth and distance that really draws you into the movie. The same can’t quite be said for converted 2D images, which are hit and miss depending on the movie, but the effect is obvious enough to make it worthwhile.

If you can stretch to the extra £49, it really is worth opting for this system over the entry-level SC-BTT190. You get built-in Wi-Fi without having to buy the expensive dongle as well as two HDMI inputs for your external gear and an integrated iPod dock. These additions alone could be worth the extra £50, before you’ve even considered all the other goodies you get, such as Viera Connect, DLNA/non-DLNA streaming, USB media playback, smartphone control, 3D Cinema Surround and more.

Sadly that extra cash won’t get you much of a step up in sound quality, as the Panasonic SC-BTT290 exhibits the same lack of refinement at high volumes as its cheaper stable mate, plus the speaker and subwoofer build quality still leaves a lot to be desired in terms of robustness and rigidity – although the main unit is much more impressively constructed this time round. Overall then, it’s not quite the overwhelming thumbs up we’ve been dishing out to Panasonic’s players, but the SC-BTT290 has enough going for it to make you happy once you get it home.