Panasonic seems to have an endless reserve of Blu-ray cinema systems up its sleeve, ranging from full-on 3D ready packages like the SC-BTT350 down to basic 2.1-channel all-in-ones like the SC-BT222. The 5.1-channel SC-BT735 sits somewhere in-between, lacking the 3D capabilities of the former but adding some of the cutting-edge features missing from the latter.


In fact, the SC-BT735 is from the same ‘family’ as the SC-BT230 and SC-BT330 (all three share the same manual), but unlike these two systems the BT735 includes tower speakers for the front and rear channels, making this one for those who like their home cinema system to be seen and heard. Each one stands just over a metre tall, but their slim 6cm width makes them more discreet than you’d expect from a tower system. 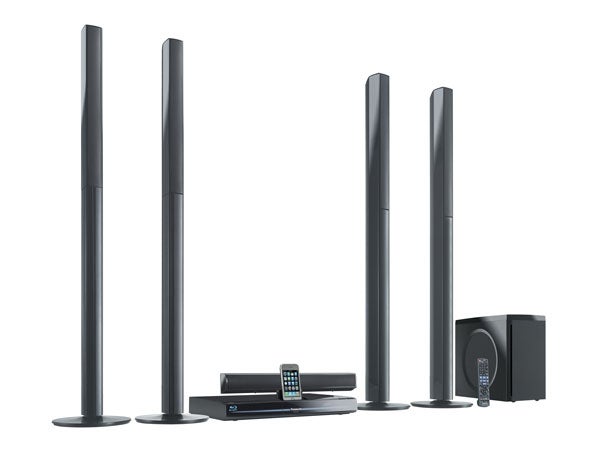 The front half of these towers is styled in an attention grabbing gloss-black finish and come in three parts – the solidly built top part houses all of the speaker drivers (two 3.5cm woofer cones and a 2.5cm dome tweeter), and slots into a hollow middle section with built-in speaker wire, which in turn is connected to a circular base. This makes installation a little more fiddly and time consuming than most all-in-ones but not confusing at all.


Panasonic has designed a clever cable tidy system whereby the wires poke through the top of the middle section and connect to the top section’s springclip terminals. At the other end you can feed it through a hole in the base leaving very little of the cable visible. If you want to go the extra mile and do away with cables for the rears completely then pick up Panasonic’s SH-FX71 wireless kit, or two if you want to upgrade to 7.1-channel (although that’s when it starts getting really pricey). 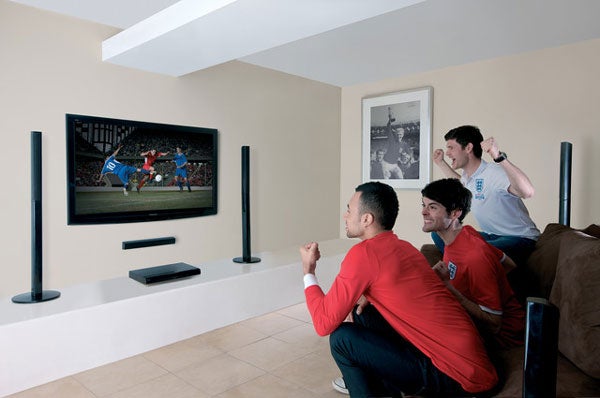 When assembled these towers have the unmistakeable feel of budget speakers but from a distance they look rather fetching. Also in the box is a long, thin centre speaker that looks like one of the towers turned on its side, and a passive subwoofer that thankfully hides its exposed MDF underneath. With its compact measurements of 180.5(w) x 322(h) x 351(d) mm, the sub won’t take up much of your space, but if you’re are forced to have it out on display then the funky gloss-black finish certainly won’t let the side down. Sadly it’s not wireless like the sub that comes with the SC-BFT800 soundbar, but at least there’s a long cable attached.

The main control unit (SA-BT735) plays your Blu-ray discs, DVDs and CDs plus it handles the audio processing and amplification. It musters a not unreasonable 1000W of welly – 125W for the fronts and surrounds plus 250W to the sub and centre – and eats Dolby True HD, DTS HD Master Audio and Dolby Digital Plus soundtracks for breakfast. On the outside it’s a pleasant-looking and functional unit, again sporting the in-vogue black finish and a large, easy-to-read display panel. 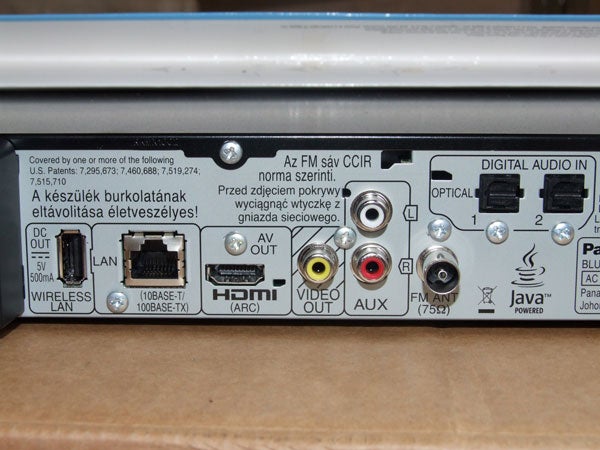 Like most of Panasonic’s latest systems, an iPod dock is located on top of the unit underneath a dust flap. With virtually the entire world now owning one of Apple’s portable devices, it’s worth reiterating how convenient it is to find this dock built-in, allowing you to enjoy music without having to faff about with additional hardware and cables. But that’s not the only media portal found on the front of the unit – there’s an SD/SDHC/SDXC card slot that lets you play AVCHD, SD Video and JPEG files, and a USB port that supports DivX HD, MP3 and JPEG files. Not an exhaustive selection of formats, but fine for casual users.


On the rear panel you’ll find a more generous array of sockets than you will on the SC-BT222. Aside from the HDMI (which supports the Audio Return Channel feature but not 3D) the most eye-catching sockets are the second USB port, intended to house Panasonic’s optional Wi-Fi dongle (more on that in a mo) and an Ethernet port that lets you make a wired connection to your home network. 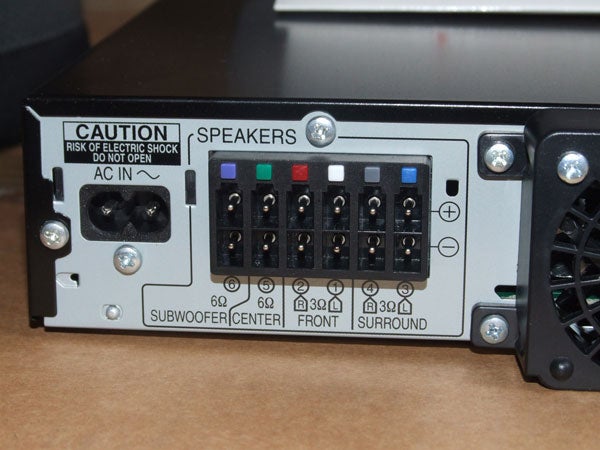 There’s also a slot for the wireless transmitter that comes with the SH-FX71 kit, two optical digital audio inputs and one analogue stereo, composite video output and an FM antenna input. On the left is a panel of colour-coded speaker terminals that correspond to the matching plugs on the end of the speaker cables. Not bad, but it’s disappointing not to find any HDMI inputs, which would have made it easy to run other HD kit through the system.


The SC-BT735’s main function is to play Blu-ray discs, and on that score it leaves no stone unturned. Under the bonnet is Panasonic’s usual array of picture boosting wizardry that aims to keep colour and detail fidelity looking ship-shape and Bristol fashion, and unlike the SC-BT222 it supports BD Live.


Elsewhere you can access Panasonic’s Viera Cast web portal. Fans of YouTube, Bloomberg, Picasa Web Albums and German news sites (!) will be in seventh heaven gliding effortlessly around Panasonic’s bespoke web interface. It’s slick, jazzy looking and uses a clear layout – the only real problems are that the content is fairly limited compared with Sony’s Blu-ray systems, plus entering text into the Search tool is fiddly and time-consuming with the remote. Will someone please bring out a compatible keyboard!


The system is also DLNA certified, which means you can stream music, video and photos from a PC or other devices on your home network. Unfortunately, it’s only designed to work with Windows 7 PCs, which leaves Vista and XP users in the lurch, but you can also stream recordings stored on Panasonic HDD recorders in other rooms of the house. This, along with Viera Cast, can be accessed wirelessly if you invest in Panasonic’s £80 USB Wi-Fi adapter (DY-WL10). 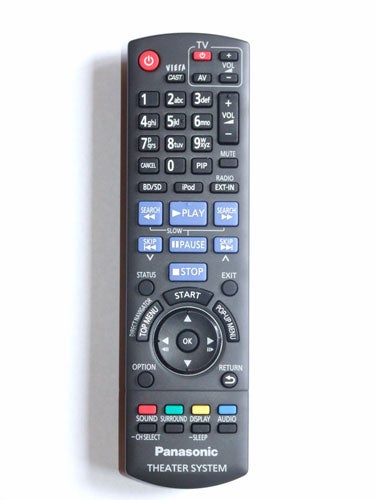 Elsewhere, you’ll find the usual range of sound modes, including Pro Logic II, Super Surround (which plays stereo sources from all speakers), 7.1-channel Virtual Surround, a range of EQ and subwoofer level settings, H.Bass, Centre Focus and Whisper Mode Surround. There are lots of other neat little features dotted about, including further picture and sound enhancements and presets that can be accessed using the in-playback ‘Display’ menu. A Playback Information Window tells you everything you need to know about the disc that’s being played.


Setting everything up is extremely simple thanks to the clear menu layout and handy wizards that guide you through more complicated stuff like network setup. There’s also the welcome appearance of an auto calibration system – for that, you’ll need to plug the supplied microphone into the port on the front panel then sit back and let the system adjust all the levels for you. However, you can turn to the manual settings if it doesn’t hit the spot.


The onscreen menus are easy on the eye and logically structured, while the remote is thankfully the same one that accompanies all of Panasonic’s systems. The button layout and labelling on this blissfully easy-to-use zapper are first class, making it easy to access the system’s many features.


As ever, Panasonic does a great job of producing the sort of sparklingly deep and detailed pictures that you expect when watching a Blu-ray disc. Edges are incredibly sharp, with nary a trace of stepping or digital nastiness, while motion is fast and fluid, helped immeasurably by its ability to output 1080p signals at 24Hz.


All of these qualities come to the fore when playing the Iron Man 2 disc, particularly the Grand Prix scene – Monaco has never looked so vibrant. The system also does an excellent job of upscaling the DVD disc that accompanies the Blu-ray version, lavishing it in gorgeous, natural colours and surprisingly sharp detail for an SD disc.


Onto sound, and the SC-BT735 doesn’t generate the same sense of wonder as its pictures. Like other Panasonic systems we’ve tested recently, the subwoofer lacks the crucial tightness and control needed to give low-end effects depth without overpowering the other speakers. Loud explosions and crashes, such as the F1 cars raining down in pieces onto the track, sound boomy and detached, but when the sub is unplugged or turned down low it exposes the slightly thin sound of the other speakers. 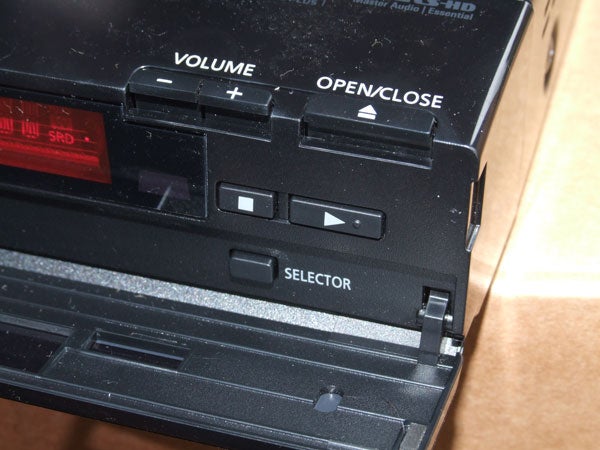 However, despite these shortcomings there is still much to admire. The sound is generally sprightly and dynamic, with clear midrange reproduction and crisp high-frequencies from every speaker. There are one or two moments of brightness with the volume up high but nothing too serious. Surround sound steering is smooth, effects emerge from the surround towers with an open, expansive feel and the centre speaker handles Robert Downey Jr’s sarky patter with a clear and authoritative tone.


With music, again the ill-disciplined sub dominates proceedings, particularly when you feed it drum-heavy dance music like Pure Gold by JD73. But the crisp hi-hats still manage to fight their way through and we have to admit that the warm, bassy sound is actually very enjoyable.


The SC-BT735 makes a convincing bid for your cash with a wide range of features (including Viera Cast, DLNA networking and a built-in iPod dock) superb high-definition pictures and a typically user-friendly operating system.


For those reasons we don’t think you’ll be disappointed after taking one of these home, although it’s worth bearing in mind that there are other systems from the likes of LG, Samsung and Sony that offer better sound quality, as well as providing HDMI inputs plus better web content and format support.