It’s no surprise that the number of Blu-ray home cinema systems on the market keeps on growing, because people are crying out for convenient and relatively inexpensive ways of upgrading to Blu-ray and getting a complete sound system at the same time.


And now that the Blu-ray format is the finished article, we’re starting to see loads of neat features creeping in – a great example being the 3D-capable, Wi-Fi equipped Samsung HT-C6930W system we looked at last week. 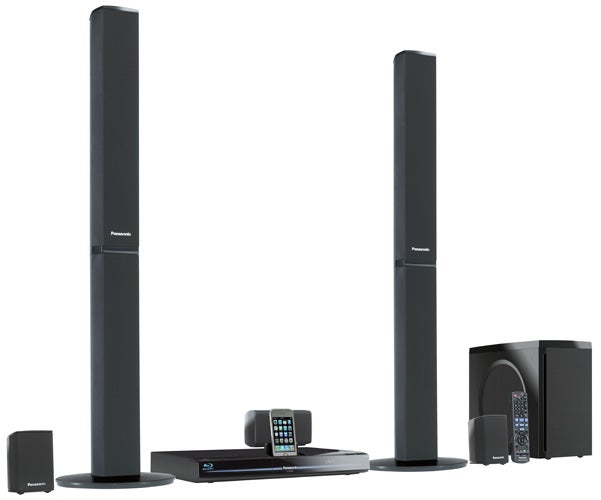 Now it’s the turn of Panasonic to show us what it can do. The SC-BT330’s feature list isn’t as comprehensive as the Samsung system above (there’s no 3D, for starters) but like Samsung, Panasonic always packs its systems full of the latest techno-tricks and more often than not delivers pleasing performance.


What sets this system apart from Panasonic’s cheaper SC-BT230 package is the inclusion of tall column speakers for the front channels, as opposed to the BT230’s diddy satellites. These speakers come in three parts that you have to screw together – the speaker itself, a stand with a built-in cable and a circular base – and they can be attached to a wall if you prefer. 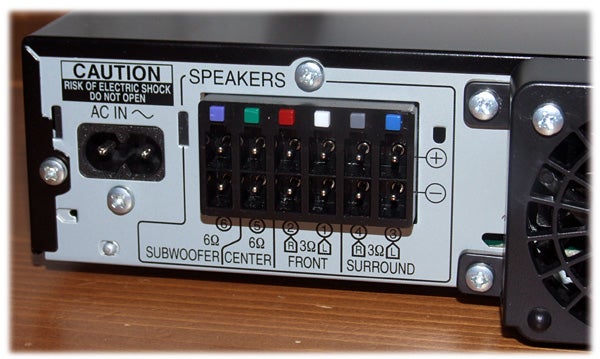 But the build quality of these front speakers leave a lot to be desired, with each section feeling hollow and plasticky, a clear attempt to drive down costs. When assembled, their shape and styling is about as elegant as a drunk dad on the dance floor, and at just over a metre tall they’re quite imposing too. If it’s style you’re after, try an LG or Samsung.


The accompanying satellites boast much better build quality. The rears are so small you can almost fit them in your pocket, while the use of a gloss black finish on top adds a touch of glamour. The centre is the same but turned horizontally to fit under your TV, while the Kelton subwoofer’s glossy front panel and compact size makes it a surprisingly stylish addition to the line-up.


These speakers can be arranged in the traditional way with the rears at the back of the room, but if you prefer you can put them all at the front and activate the Cinema Surround mode. All of the speakers use cones made from bamboo to deliver a sound that Panasonic describes as ‘more responsive’ than regular cones. 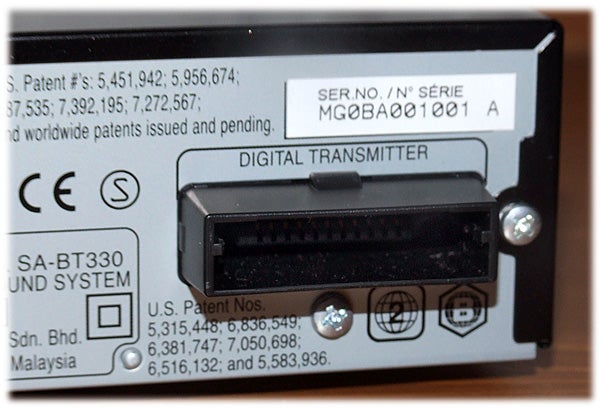 And if you’re feeling flush, you can add an optional SH-FX71 wireless transmitter/receiver kit for around £100, which lets you install rear speakers without having to run cables to the back of the room. If you can afford two SH-FX71s and have two extra speakers to hand, Panasonic says you can even upgrade to a 7.1-channel system, although with only 5.1 amplification on board you’ll have to settle for virtual 7.1-channel surround.


Blu-ray playback, audio decoding, amplification and all other functions are carried out by the slim, stylish main unit, which looks just like Panasonic’s standalone Blu-ray players. Inside, the amp musters 1,000W of audio power and it’ll decode Dolby TrueHD, DTS HD Master Audio or any of Blu-ray’s other audio formats.


The Blu-ray section includes many of the features and picture tech found on the company’s standalone decks, including P4HD processing, PHL Reference Chroma Processor Plus and High Precision 4:4:4 colour reproduction. And because it’s Profile 2.0, you can use it to access BD Live content, although you need to insert an SD card to store downloads.

On the front, the right-hand side of the fascia drops down to reveal an SD card slot and a USB port, and on top is another hidden treat – a built-in iPod/iPhone dock. This is an increasingly common feature among one-box systems, and we’re all for it.

The rear panel includes an HDMI v1.4 output with an audio return channel (or ARC), which means you can pipe sound from your TV to the system via HDMI, as well as sending pictures and sound to the TV, which eliminates the need for two separate cables – but you’ll need a compatible TV to use it. Other AV connections include two optical digital audio inputs, composite video-out and analogue stereo input.


Then we come to the more interesting sockets, such as the Ethernet LAN port and second USB port, which let you connect to your internet router and home network. But for wireless functionality, you’ll need to buy the optional DY-WL10 802.11b/g/n adapter for around £80. We appreciate these extra options, but forking out an extra £180 or so for Wi-Fi and wireless rears is a big ask when you consider that the Samsung HT-C6930W throws it all into the box for no added cost.

But if you can afford it, then it’s worth the investment because when connected this DLNA-certified unit can stream MP3, JPEG and DivX files from Windows 7 PCs on your home network, as well as recordings stored remotely on networked Panasonic recorders. You can also visit Viera Cast’s range of websites including Google Picasa, YouTube and Bloomberg.


You can also play media stored on USB flash drives or SD, SDHC and SDXC cards. The unit supports MP3, JPEG and DivX HD via USB, and MPEG-2, JPEG and AVCHD from SD cards.


As ever, there’s a basic but useful set of picture and sound adjustments. A few presets and a Detail Clarity mode cater for pictures, while Four EQ modes lend different characteristics to the sound, H.Bass enhances low frequencies, Centre Focus shifts speech toward the TV screen and High Clarity Sound sharpens up audio through the HDMI port. 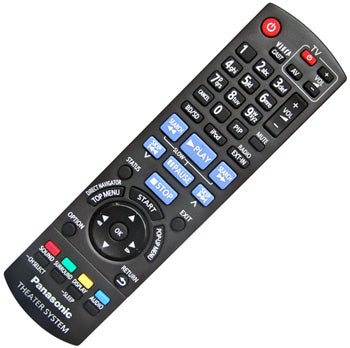 Like any good all-in-one system, the SC-BT330 makes it easy for you to set up and use. The Quick Start mode makes it speedy to boot up, and for first-time installation you get a step-by-step guide for all the main settings.


This includes a Smart Setup auto calibration mode that sets the optimum audio parameters using a microphone and test tones (the speakers can be manually tweaked in the setup menu if you’re not satisfied with the results). Also included in these initial settings is the blissfully straightforward network setup procedure – this can be a real chore on some players.


In fact, the SC-BT330’s operating system is remarkably slick and easy to follow across the board. For example, the Start menu makes it obvious where your content is located (under the ‘Input Selection’ option), and during Blu-ray, music and photo playback the bold, colourful displays are presented in the clearest way possible.


Panasonic also sticks with a tried and trusted formula with the remote, using an array of large rubbery buttons laid out in a thoughtful way. Helpfully, it sports individual buttons for accessing Viera Cast, pop-up menus and the various sound modes.

Although Panasonic still lags behind Samsung in the disc loading stakes (”Terminator Salvation” takes 85 seconds), when you get there it’s worth the wait. It’s been well documented how faultlessly Panasonic’s standalone players transfer pixels from disc to screen, and this system is no different.


For example, its reproduction of ”Transformers: Revenge of the Fallen” left us gazing at the screen with wide-eyed amazement. The amount of detail this system dredges up is astonishing – the smallest minutiae, like fine skin textures, or scuffs and scratches on beat-up robots, is clearly and precisely reproduced. Shots of the Egyptian desert look particularly striking.


The SC-BT330 backs up these superb pictures with loud, entertaining sound quality, which lacks refinement in core areas but makes the movie’s battle scenes undeniably exciting, particularly to undiscerning ears. 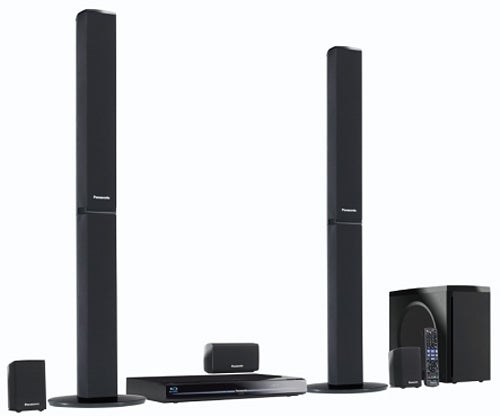 The soundstage is wide and enveloping, with metallic pings, gunshots and all manner of other effects pinging back and forth between the speakers. The sound isn’t excessively bright either, often a shortcoming of budget one-box systems, and there’s a pleasing homogeneity of tone between the front, rear and centre speakers.


Those bamboo cones live up to Panasonic’s claims too, allowing the centre speaker to communicate speech with directness and intelligibility, cutting through the movie’s constant carnage. The emotive strings and brass in the score are also delivered with pleasing warmth.


However, there are a couple of shortcomings. The first is the subwoofer – its bass output is loose and cumbersome, as opposed to taut and punchy. The overpowering drone during action scenes isn’t a patch on the nimble, well integrated low-end support you get from a good quality powered sub. There are three settings, and only the lowest offered a satisfactory balance.


We’d also like to hear the system attack sharp sudden sounds a little more aggressively, and although it picks out some subtle background detail, much of it gets lost in the mix.


Although the Panasonic SC-BT330 is by no means the perfect one-box system, there are certainly more pros than cons. Its feature list is terrific, the highlights of which are media streaming, Viera Cast and a built-in iPod dock – plus the HDMI audio return channel will be a welcome addition for those with compatible TVs.


But aside from the speaker’s shonky build quality, the biggest let-down is the need to purchase optional extras to enjoy the wireless functionality. Factor the Wi-Fi dongle and wireless speaker kit into the cost and it ends up being more expensive than the Samsung HT-C6930W, which not only comes with those extras as standard, but also throws in 3D support, built-in Wi-Fi, 7.1 speakers, faster disc loading, built-in memory, wider-ranging format support and more appealing looks. Sounds like a no-brainer to us.