Our love of all things full HD has led us in recent times to concentrate predominantly on high-spec, high-cost projectors. So we figured it was high time we got our hands on a more affordable projection solution for a change. And without doubt the most instantly intriguing model around right now is Panasonic’s PT-AX200E: an HD Ready LCD projector going for the princely sum of £758.95.


What makes the AX200E so interesting is the fact that it’s from Panasonic – a brand with way more home projector experience than most of its rivals, and which has put that experience to great use in the past with some truly outstanding products. So provided Panasonic hasn’t had to make too many compromises to keep costs low, the AX200E could be a bit of a star.


Not that it looks particularly star-like, mind. Its off-white colour scheme looks a touch drab, and its design is distinctly lacking in flourishes. It’s also surprisingly large for a budget unit, occupying quite a chunk of your coffee table. Here’s hoping the extra size has been put to good use with the optical engine and/or some sort of system for reducing cooling fan noise. 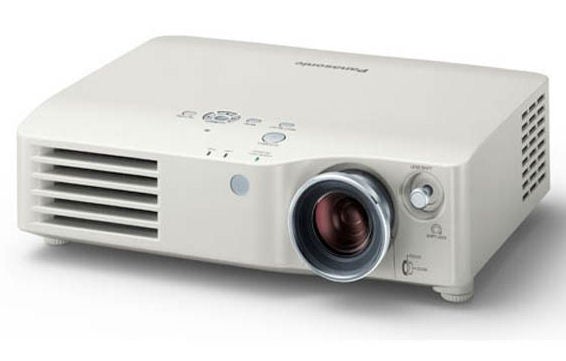 The AX200E’s connection panel is pretty well stocked for a projector under £800. Two HDMIs dominate proceedings – one more than I might have expected for so little money, even in today’s digitally-obsessed climate.


There’s also the inevitable component video input for analogue HD content (as required by the HD Ready specification), S-video and composite video options, a D-Sub PC port, and a serial jack. In an ideal world there might have been a 12v trigger jack for driving an electronic screen, but then we guess anyone spending this little on a projector might very well be considering just projecting it onto a white wall.


One excellent Panasonic tradition carried on by the AX200E concerns its ease of use. It’s actually one of the simplest projectors to set up you will ever come across, thanks to an inspired front-mounted joystick that allows you to shift the image up, down, left or right. There’s further assistance from a very healthy 2x zoom that helps you adapt the image to a wide variety of room sizes; and a remarkably simple, backlit remote control.

What’s even more impressive about how easy the AX200E is to use is the fact that it’s by no means short of features. In fact, it’s got more than any other projector in its class, so far as we’re aware.


For starters there’s Panasonic’s Smooth Screen technology, which uses a sophisticated lens and prism arrangement to reduce the potential impact of LCD technology’s infamous ‘chicken wire’ effect, where the structure of the pixels on the LCD chips becomes visible in the picture.


The projector can also take 24p footage via its HDMIs, and sports a number of thematic image presets including a Game mode that optimises the image processing for a faster response time, and a Cinema 1 mode that’s reckoned to feature settings optimised to ‘Hollywood Picture Quality’ by industry experts.


Then there’s a Pure Colour Filter system that adjusts the lamp output to produce light levels which maximise the projector’s colour performance; advanced dynamic sharpness control that avoids the haloing effect seen with normal sharpness-boosting processors; scene-adaptive MPEG noise reduction; a ‘Light Harmonizer 2′ system that can adjust the image automatically depending on the amount of light detected in the room; and normal and Eco lamp power options. 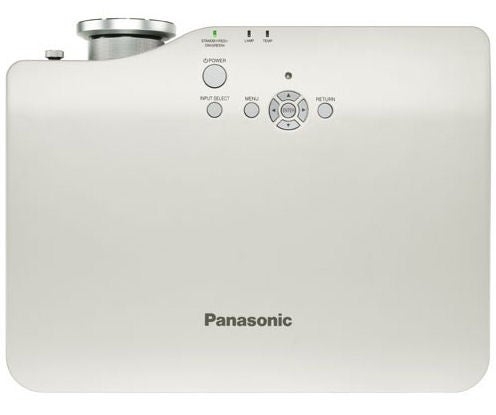 The AX200E’s key on-paper specs make impressive reading too, including as they do a good looking contrast ratio of 6000:1 and a remarkably high (for under £1000) brightness output of 2000 ANSI Lumens.


It should be pointed out, of course, that you’re never going to get these maximum contrast and maximum brightness figures appearing simultaneously. For the contrast ratio depends on a dynamic iris system which reduces the lamp output (and thus the image’s brightness) when a dark scene is detected, to reduce the greyish appearance to blacks that can trouble many LCD projectors.


But even with this in mind the figures look mighty fine for such an affordable unit; indeed, to our knowledge the 2000 ANSI Lumens brightness is currently comfortably the highest such figure in the AX200E’s class.

Finally settling down to put the AX200E through its paces, I have to confess to feeling just a bit disappointed. At first I wondered if this was just because all the on-paper specs had got me expecting too much, or because so many of the other projectors I’ve seen lately have belonged to a much higher price point. But in the end I had no doubt that there are two or three key weaknesses which really can’t be ignored even on a projector costing under £800.


The most immediate issue concerns that old chestnut, LCD black level response. During the opening scenes of The DaVinci Code as viewed in HD on Sky, for instance, the darkness of the Louvre’s display rooms looks noticeably greyed over versus the best budget DLP models around. As usual this has the knock-on effect of hiding subtle background details and colours, making the image feel slightly flat.


I also became aware of some distracting brightness ‘stepping’ as the dynamic iris went about its business of adjusting the lamp output in response to changes in the image content. 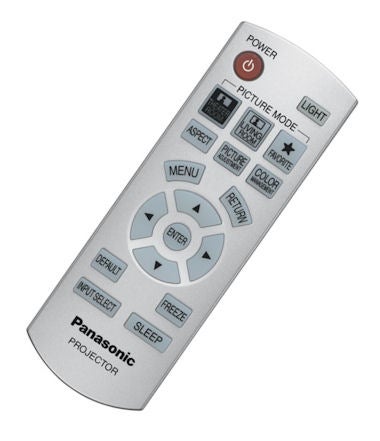 My final issues with the picture are that there seems to be a little noise in dark scenes, and that images generally don’t look quite as sharp and detailed with HD as the very best budget projectors can – a result, perhaps, of the Smooth Screen technology.

That said, the Smooth Screen technology also kicks off what is a pretty respectable list of good points. For it does a terrific job of suppressing every last trace of the chicken wire effect. In fact, we’ve never before seen a sub-£1k LCD projector looking so smooth.


Colours are surprisingly natural in tone too considering the black level shortcomings, and perhaps most significantly of all, the picture is capable of being extremely bright if you choose, say, the Dynamic, Vivid Cinema, or Game modes. In fact, it’s probably the only truly affordable projector I’ve seen to date that can genuinely be watched in substantial levels of ambient light.


The Game Mode is also very successful in the heavy saturation it brings to bear on colours, bringing out all the vibrant lustre of the cars and landscape of the latest Burnout game’s Paradise City location.


What all these strengths point to is the likelihood that the AX200E has been aimed squarely at predominantly casual projection users more interested in bigging up their gaming experience or having the occasional big-screen footy night with a few mates round, rather than at really serious home movie fans.


If you’re just after a projector to cater for gaming or social occasions and can afford to spend over £750 on such a casual device, the AX200E fits the bill perfectly. But if like us you also like to enjoy watching films regularly on your projector, you’ll probably join us in finding the AX200E just a wee bit disappointing.