When the Flip brand was axed by relatively new owners Cisco, it looked like the ultimate proof that the penchant for pocket Internet camcorders was just a fad. In design terms, focusing on one thing, and doing it really well, is a very valid approach. But as a camcorder for anything more than grabbing the opportune moment, the Flip format is rather inadequate. So the slightly more capable pistol-grip style has been growing in popularity, and Panasonic’s latest attempt to grab some of this market is the HX-WA2.

The WA2 has a better core specification than any pocket Internet camcorder. The sensor is a sizeable 1/2.33in CMOS with 14.4Mpixels, of which 14.3Mpixels are available for still images. It also has an optical zoom, rather than the digital ones pocket Internet camcorders generally offer. The WA2’s zoom abilities are a little confusing, though. It’s specified to offer a 5x optical zoom and 15x iZoom. But by default the maximum is 7.5x, dropping to 6x with the Active image stabilisation enabled, neither of which match the spec.

The secret sauce here is a little button on the rear of the camera labelled W/T. This behaves a bit like a macro, zooming in by an order of magnitude in one rapid motion. But it isn’t a macro mode. Instead, it’s more of a 2x tele converter, and Panasonic calls it the Double Range Zoom button. In W mode, zoom is limited to 7.5x with iZoom turned on as already described. But enable T mode and this is doubled, to make the 15x top figure.

Unfortunately, this means you can’t go from 1x to 15x in one seamless zoom, but this is still superior to the digital zooms offered by most pocket Internet camcorders. Also, the iZoom uses extra pixels on the sensor (its 14.4Mpixels is much more than the 2.07Mpixels required for Full HD), rather than blowing up the video signal, so doesn’t entail the loss in quality of a digital zoom.

The image stabilisation system isn’t quite so superior to pocket Internet camcorders, however. Not every example of the latter has any image stabilisation at all, so the WA2 is an improvement on these. But it still only offers the electronic variety, which is not as effective as the optical image stabilisation found on better mainstream camcorder models. This does at least have two modes – standard and Active – with the second of these using more of the sensor to provide smoothing of wilder vibrations, and is primarily optimised for shooting whilst walking, the downside being that the maximum iZoom is reduced in this mode. 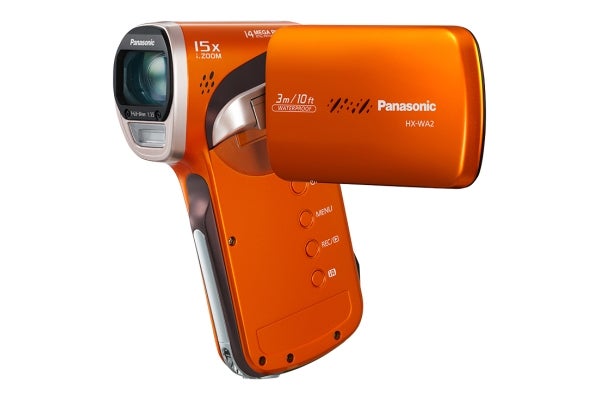 Another camcorder trend, particularly for pocket models, is ruggedisation. After all, a product designed to be carried with you everywhere can follow you to even more locations if it can take a knock or two and survive the odd rainstorm. The WA2 is rated to function to a depth of 3m underwater, so you could safely use it in most swimming pools or in shallow seawater without fear of submersion. The only door on the camera body is secured by two switches that you must operate in sequence to open, making this very difficult to do accidentally. The WA2 is also solidly constructed, but it doesn’t have any particular standard for resilience or drop height.

When it comes to configuration options, the WA2 sits somewhere in between the very limited features of the Flip and its kin, and regular-format camcorders. There is a healthy range of scene modes, including an Underwater option which is intended to counteract the image discolouration caused when shooting through water. Alongside the fully automated white balance, there are four presets plus the ability to set white balance manually. The colour modes include digital effects like black and white and sepia, but also vivid and soft saturation settings, plus soft skin and HDR, although the latter is primarily aimed at the photography function. There’s even manual focusing, although it’s so fiddly and slow to operate, you will only want to use it when absolutely necessary, which will probably be never.

You don’t get any direct control over shutter or iris, though. Also, all of these settings can only be found in the full menu, which is accessed using the menu button on the side and the joystick on the rear. So they’re not quick to get to, and the joystick otherwise performs no function, which is a missed opportunity when it could have been used to provide a quick menu for some of the most frequently used settings.

The WA2 has plenty to offer digital photographers, too. It’s not going to replace a dedicated compact, but mostly for ergonomic reasons. The gun format doesn’t feel quite right for taking stills. Again, though, most pocket Internet camcorders don’t offer stills shooting at all, so the WA2 already has an advantage here. You can control ISO from 50 to 1600, switch between centre, spot, and multi-point metering, and toggle between spot and 9-point autofocus. There are 14Mpixel and 3Mpixel burst modes, plus 2- and 10-second self timer options.

There’s also a panoramic mode, which takes multiple images as you sweep the camera vertically or horizontally, then stitches them together to create a single wide or tall image. However, it’s a little finicky about sweeping speed so can take a few goes to get right. 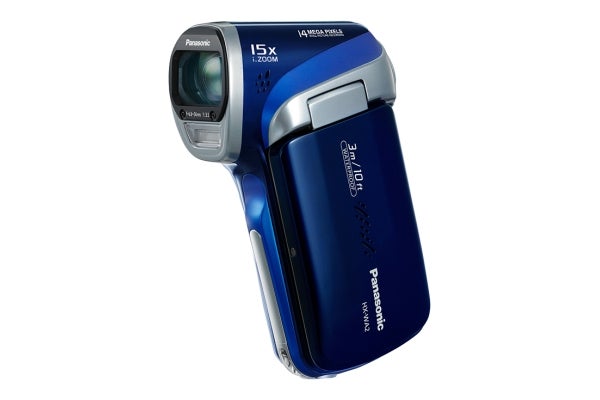 Continuing our comparison with pocket Internet camcorders, the HX-WA2 competes very well on image quality, as well. In particular, alongside good detail and colour, it copes well with contrasting brightness levels, neither blowing out highlights nor losing detail in shadows, which is a common issue with cheap camcorders. Low light performance is more of a mixed bag. Although brightness and colour are reasonably well maintained as illumination drops, there is some grain visible. This is still good for a camcorder at this price, but only marginally better than pocket Internet models.

Verdict
At a little over £200, Panasonic’s HX-WA2 isn’t as budget conscious as pocket Internet camcorders costing £100 or less. It doesn’t quite have the immediate single-function appeal of Flip-style camcorders, either. But if you do fancy a go-anywhere pocket-friendly shooter, and are willing to pay a little extra for quite a lot more features, this is a capable camcorder for the money.