Panasonic showed us an early sample of the HDC-TM700 at the end of last year, but if we’d told you about it then, we’d have had to kill you afterwards. Now, at last, we can bring you the first big camcorder release of 2010 – the initial benchmark the other manufacturers will have to meet or exceed. The TM700 is the heir to the HDC-TM300 and TM350, and it improves on them in some key areas.


The first surprise is a new flavour of Full HD. This is the first consumer camcorder to offer 1080/50p recording – yes, that’s a full 50 progressive frames of Full HD video every second. However, this isn’t part of the AVCHD standard so Panasonic has had to use a different file format. The video is recorded as H.264 running at 28Mbits/sec. Strangely, Panasonic hasn’t taken this opportunity to implement the top AVCHD option, and instead the maximum AVCHD data rate available is still 17Mbit/sec, rather than the 24Mbits/sec now offered by most of the other big names.


Panasonic is also sticking with its 3MOS system, and each of the three CMOS sensors remains 1/4in in size with a gross 3.05-megapixels apiece. However, a smidgen more interpolation boosts still image resolution to 14.2-megapixels, up from the 10.6-megapixels offered by the previous generation. 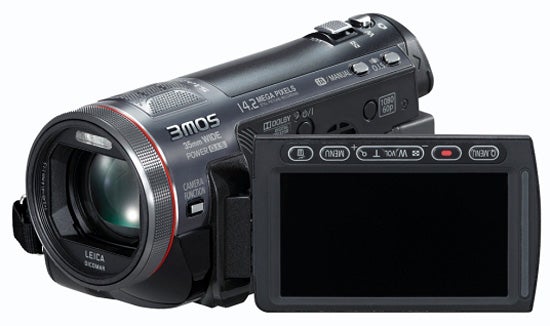 The lens has been upgraded, however. The new Leica Dicomar glass is now equivalent to a 35mm wide angle at its maximum width, which will allow you to record more at close quarters indoors, for example. Panasonic has also added a new flavour of image stabilisation called Power OIS. This can detect vibrations down to a 5Hz frequency and, in our testing, was able to iron out quite severe motion, so long as it was regular.


The TM700 has a relatively healthy 12x optical zoom like its predecessors, but Panasonic has followed the trend and augmented this with an Intelligent Zoom system. This makes use of the extra pixels the CMOS has above those required for Full HD, which boosts the zoom factor to 18x without the loss in quality normally associated with a digital zoom.


Being a Panasonic TM model, the TM700 records its video to flash memory and has 32GB built in. This is enough for over four hours of footage in the top HA Full HD 1080i mode, but only two hours 44 minutes when shooting 1080/50p. You can augment storage capacity using the SDHC slot, which supports SDXC so allows capacities up to 64GB. If one storage medium runs out of space in the middle of a shot, the TM700 will automatically switch to the other and continue recording without dropping a frame.

As with the TM300 and TM350, there’s no accessory shoe built in, with the TM700 instead relying on an adapter that slots onto the side of the body. Unfortunately, Panasonic has eschewed the sturdy sliding cover of the previous models and now uses a much more flimsy plastic door. This swivels round out of the way, so shouldn’t be too prone to damage, but we still prefer the previous implementation. The tougher hard covers over the video ports and SD slot have also been swapped for plastic. Only the flap covering the microphone and headphone minijacks remains the same. 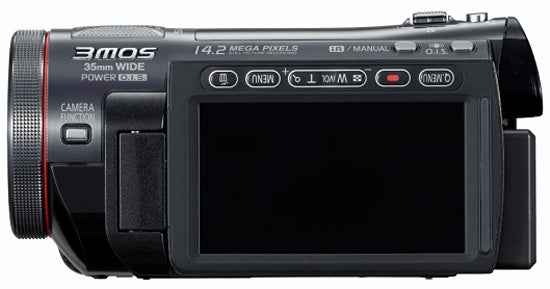 The control system has been changed yet again from the previous generation, and we’re pleased to report that the alterations here are for the better. There’s still a lens ring, and a nearby function button changes its operation between manual focus, white balance, shutter and iris. The single function button replaces the two previously used. A single press enables manual mode, whilst a second one cycles through the four options. The lens ring is then used to make adjustments. It’s an extremely quick and easy system to use, and the most powerful manual control method of any consumer camcorder. 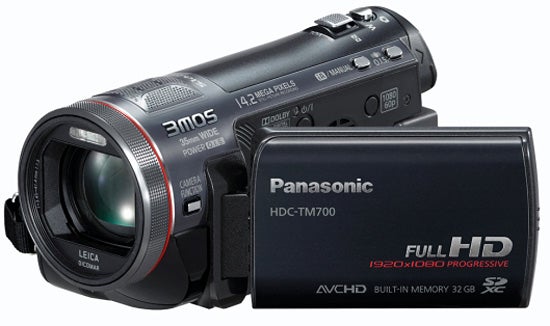 Panasonic’s Intelligent Auto system has been further enhanced by the addition of face recognition. You can register faces and these will be the ones kept in focus even in a large group. They are stored permanently, and can be recalled for use at a later date. We found that the system does actually work, but is quite picky about the lighting conditions being similar to when you registered the face. The AFAE system will also now remember faces when they go off screen, locking back onto them when they return to the frame. In digital camera mode, you can call upon the smile shutter system to take the picture when people have the appropriately joyful facial expression.


There are some smaller additional features, too. A time-lapse recording facility lets you record a frame at intervals from one per second to one every two minutes. But no high-speed option is available. The wind noise cancellation has been dramatically improved, and has a noticeable effect on the clarity of recordings made in breezy conditions. The LCD has been increased in size from 2.7in to 3in.

Aside from the headline 50p recording mode, Panasonic hasn’t made hugely significant improvements to image quality. The previous generation was already excellent in this respect, though, and the TM700 is still better. If you analyse frames very carefully side-by-side, it is possible to discern a little more detail in good lighting. Low light sensitivity is also marginally improved. So overall the TM700 offers the best quality video currently available from a consumer camcorder. 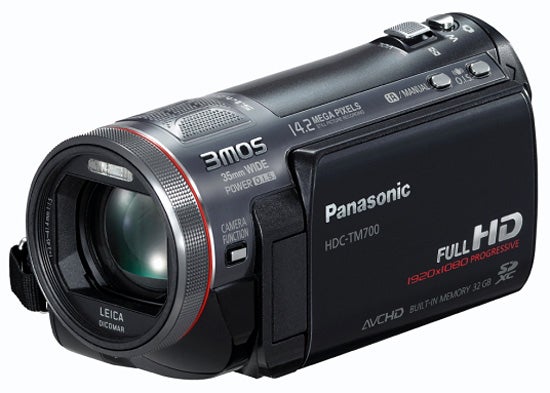 We’ve had a brief period of calm where video formats are concerned. The four most major camcorder brands have focused their attention on AVCHD at a 1080i resolution, and all the main video editing apps now support this kind of footage. Panasonic’s 1080p mode throws the formats open again. Macs can’t currently cope with 50p footage at all, but we found we could load the footage into AVCHD-capable PC software and edit it, although without a 1080/50p preset you lose half the benefit. So whilst this footage has the potential of being stunningly smooth, you won’t notice until peripheral devices and software catch up. You won’t even be able to watch the footage on your TV in all its glory unless you have one which supports 1080/50p natively.


Overall, the HDC-TM700 produces a killer combination of consummate manual control and best-of-breed image quality. And with a price already similar to the outgoing models, you should look no further than this if you’re in the market for a top-end HD camcorder with semi-pro capabilities. Panasonic has cemented the lead it acquired in 2009, and upped the ante still further, making this the camcorder to beat in 2010.