The 3D revolution is already with us in earnest. Just six months ago, there was only one consumer-grade 3D camcorder worth considering, Panasonic’s HDC-SDT750. But already we’re seeing the floodgates beginning to open, and not just at the high-end, early-adopter section of the market. Panasonic’s HDC-SD90 is far more mid-range in positioning, yet it offers optional 3D shooting alongside a wealth of enthusiast features.

The HDC-SD90 uses a similar 1/4.1in CMOS sensor with 3.32Mpixels to the HDC-SD60, one of our favourite budget HD options. However, the lens is slightly different. So a 26x optical zoom is available – up from 25x for the SD60 – and the Intelligent Zoom option boosts the factor to 40x, compared to 35x for the SD60. As more pixels are available for shooting video than are required, Intelligent Zoom crops into the frame without losing resolution, although this uses a smaller sensor surface area so has an implication for low light sensitivity. 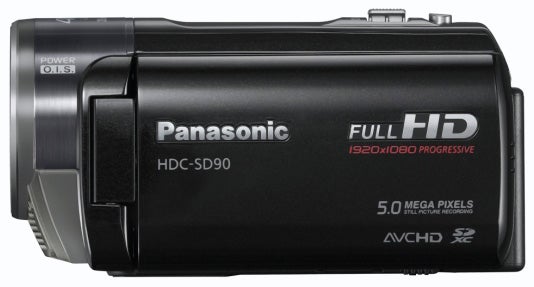 The image stabilisation system also blends digital and optical methods. Called Hybrid OIS, its combination of techniques provides stronger smoothing of camera vibrations than either on its own. We found it quite effective, certainly on par with the advanced stabilisation methods available from competitors.


Another surprise comes from the range of video recording formats available. Alongside the usual array AVCHD modes, all of which operate at 1,920 x 1,080 Full HD resolution with 50i interlaced fields, the SD90 also offers a 50p option. This records at 50 frames per second, for smoother motion, but the file format switches to MP4 from AVCHD, which can have compatibility issues. There’s also an iFrame mode available, which uses a quarter-HD resolution of 960 x 540, and is allegedly provided for Mac compatibility. Still images can be grabbed up to 5Mpixels, with a 2,592 x 1,944 resolution, although this is reduced to 4.5Mpixels and 2,816 x 1,584 when shooting video at the same time.

Footage is captured to removable SD cards, with support for SDXC. So capacities up to 64GB can be used. The top AVCHD mode operates at 17Mbits/sec, and the 1080/50p option pushes this to 28Mbits/sec. But as this uses twice the frame rate, the per-frame compression is actually slightly greater than with AVCHD. You get under 40 minutes of 1080/50p on an 8GB card, but slightly over an hour with the top AVCHD option. 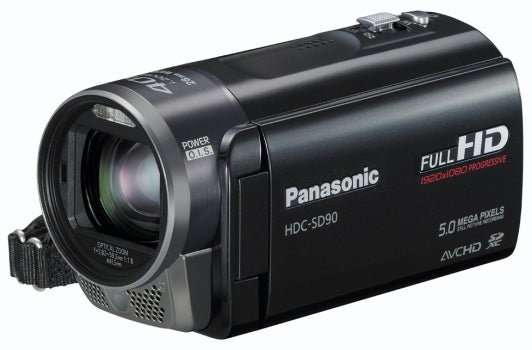 We’re generally pleased with the level of manual control on Panasonic camcorders, and the SD90 goes marginally beyond our expectations in this respect. Most functions are operated via the 3in widescreen TFT LCD, and the menu is quite different from previous models, with a rolling list of icons down the left-hand side of the display. In Intelligent Auto mode, you can use the touchscreen to specify a reference point for autofocus, which can also be tracked during camera moves.


But switch to manual mode, and the full complement of controls becomes available. Since manual focusing uses the touchscreen, it’s a little fiddly to operate, and techniques like rack focusing will be impossible. Shutter and iris can be operated entirely independently, which few other manufacturers offer, especially at this price. The shutter can be varied from 1/50th to 1/8,000th, and if you turn on auto slow shutter, you can drop the shutter to 1/25th for even brighter images in low light. The iris offers settings from F16 to F1.8, and when the aperture is fully open you can add up to 18dB of video gain on the top – a feature unique to Panasonic at the consumer level of the market. 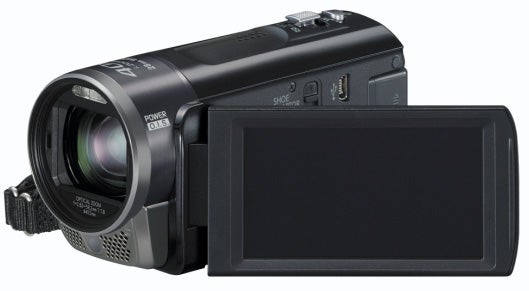 If you really are serious about your video-making, the SD90 has most of the requisite physical features as well. There’s no accessory shoe built in, but inspiration has been taken from Panasonic’s recent high-end models and includes an adapter that slots on the rear to provide a standard-sized shoe when required. There’s a 3.5mm minijack for hooking up an external microphone, and delve into the menu and you will find manual audio level control. The one omission is a minijack for headphones, with just a proprietary plug for line-level audio and analogue video available, alongside mini HDMI and the USB connection for data connectivity.

As we hinted at the beginning of this review, the 3D shooting facility is optional. You need to purchase the VW-CLT1 adapter, and this costs a whopping £280, lifting the SD90 well out of the budget category, although support is built into the camcorder already. The VW-CLT1 screws onto the SD90 via a filter adapter included with the 3D lens, which is not a rapid job. The adapter contains two lenses side-by-side, which project the two images for the stereoscopic image onto the CMOS sensor next to each other within the HD frame. These are squashed horizontally (using an anamorphic system where pixels are considered rectangular rather than square), and as only half the area of the sensor is used for each side, low light sensitivity is notably reduced. 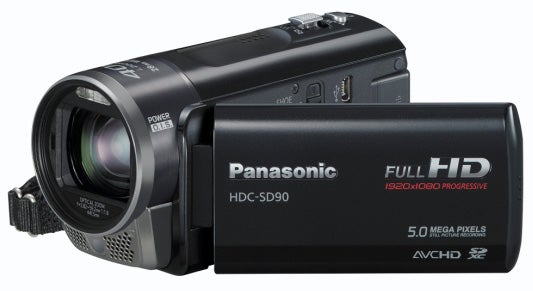 In good lighting, though, 3D video is effective, with a clear sense of depth. The SD90 can output a 3D signal over HDMI to a compatible TV. However, as the 3D lens is an attachment, zooming is not possible and most camcorder settings are disabled when it’s connected, so creative potential is considerably reduced.


In regular 2D mode, the SD90 is capable of impressive video quality in most conditions. Colours are faithful, although Panasonic doesn’t emphasise the vibrancy as much as some manufacturers, and there’s a high level of detail with very little sign of noise. Most notably, although Panasonic hasn’t switched to back-side illumination yet, the abilities in low light are quite impressive. Noise levels remain acceptable to relatively low lighting intensities, with good saturation and a decent dynamic range.


The 3D compatibility may be the biggest headline for the HDC-SD90, but at its core this is essentially a very well featured midrange HD camcorder. If your budget can’t quite stretch to a high-end model, this model would make a very acceptable compromise. With more enthusiast features than similarly priced competitors, and equal or better image quality, the HDC-SD90 gives you plenty for your money, with the added bonus of 3D if you’re feeling a bit more flush.