From the relative uniformity of MiniDV over the last decade, camcorders now come in a bewildering range of formats. We’re at the watershed between standard and high definition models, and there are also many choices of recording medium. But where Panasonic’s HDC-SX5 hedged its bets, offering both SD and DVD disc recording, the HDC-SD5 is much more focused – it just records to SD. And we reckon it’s all the better for it.


Whilst the SX5 has many commendable features, the SD5 has one it couldn’t possibly boast – a very compact and svelte form. It weighs just 400g, and at 74mm wide and 67mm tall it’s skinnier than most models. Yet this is still a high-definition camcorder recording with the AVCHD format. It uses a three-CCD sensor system, too, rather than the single CMOS offered by Sony’s consumer HD camcorders. With optical image stabilisation as well, the SD5 has potential to punch well above its size. 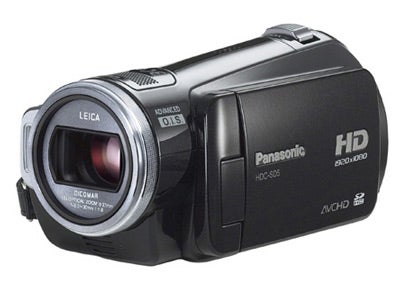 The similarity in names might lead you to believe the HDC-SD5 is essentially the same inside as the HDC-SX5, and it is. An identical trio of 1/6in CCDs with 560Kpixels apiece are allied with the same Leica Dicomar optics. So, although this is a three-CCD camcorder, its sensors are very small, which will have an impact on low-light sensitivity. Unlike its direct predecessor, the HDC-SD1, the SD5 offers Full HD recording at 1,920 x 1,080, rather than the anamorphic 1,440 x 1,080, although the latter is available as an option.


The SD5 actually offers three recording modes – one using Full HD called HG, and two flavours of 1,440 x 1,080 with different levels of compression. At the top HG setting, the video consumes 13Mbits/sec, so an 8GB SDHC memory card will be enough for around 80 minutes of footage. Unfortunately, Panasonic doesn’t supply a memory card with the SD5. So you will need to add at least £40 to the price before you can start shooting, although you will still get change out of £700 in total. As with virtually all camcorders these days, the SD5 can also shoot still images, but only at its native HD resolution of 1,920 x 1,080, which is useful but won’t be giving your dedicated camera any sleepless nights.

The SD5’s diminutive proportions do have their downsides, however. It has no accessory shoe, unlike the HDC-SX5, and no microphone input nor headphone jacks. So you’re stuck with the built-in microphone. And unfortunately, what looks like a lens ring actually just unscrews the built-in automatic lens cover. The fact that memory cards are loaded from the bottom of the camcorder could also prove annoying if you intend to use the SD5 with a tripod, as you will need to unscrew it to change cards.


Very few functions have their own separate buttons. In fact, apart from the LCD brightness and PRE-REC control, everything must be accessed through the joystick and menu. The PRE-REC system buffers three seconds of video at all times when enabled, so when you hit record this is tacked on the front. This means if you’re a bit late on the shutter you won’t miss the important bits – although you need to have the forethought to enable the PRE-REC function in the first place. 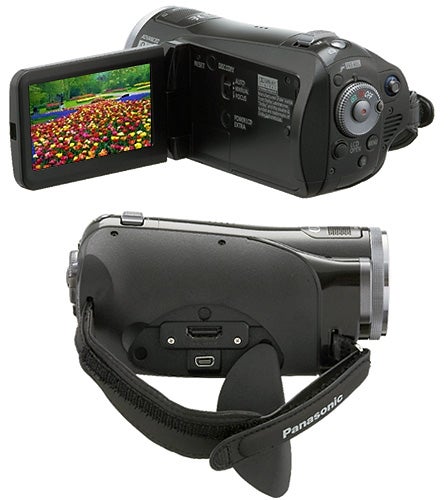 However, despite the lack of discrete buttons on the SD5, Panasonic’s joystick system is very user-friendly. This is located right where your thumb is during normal operation and with a quick press calls up the options, whereas flicks up, down, right and left navigate between them. The various options include most of the manual settings you might need. You can select indoor and outdoor white balance presets, manual or automatic modes. The iris can be varied from F16 to F1.8, with up to 18dB of gain added on the top, and the shutter from 1/25th to 1/8000th – with both options available independently.


The joystick is also used to toggle Colour Night View, which reduces the shutter speed, sacrificing frame rate in favour of letting in more light. There’s a Soft Skin mode, back light compensation, and intelligent contrast. The latter is a relatively effective system for bringing out the contrast in very bright areas and shadows, although it can’t work miracles. You can turn on fade in and out at the beginning and end of clips, toggle the Telemacro function, and access photographic functions including a 10 second self-timer, and the built-in flash. In fact, there’s virtually no reason to enter the full menu system for anything other than initial setup.

Considering its virtually identical optics and electronics, not surprisingly the HDC-SD5 provides almost the same video performance as the SX5, with the same failings. In decent lighting conditions – such as broad daylight – it performed very well in our tests, with great colour fidelity and the detail you would expect from an HD camcorder. But the small CCDs did make themselves evident more and more as we reduced the level of illumination. The level of grain in low light is quite high, with little or no colour. The AVCHD recording format only serves to accentuate these problems. 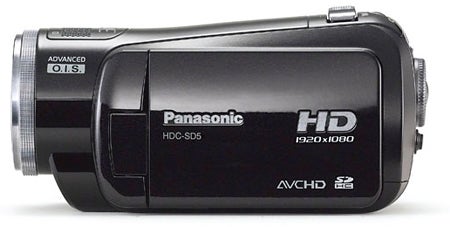 However, since AVCHD support is now virtually ubiquitous in editing software, the footage can readily be brought into Ulead VideoStudio 11 Plus or Pinnacle Studio 11 Plus. The one exception is Adobe Premiere Elements, which still resolutely avoids AVCHD, even though it’s now in its fourth incarnation. If you simply want to watch your footage on a TV, the Panasonic offers a comprehensive set of output options, including HDMI, component and composite analogue – but no S-Video.


Although it’s quite a bit more expensive, we still prefer Sony’s HDR-SR8E as the king of consumer HD camcorders and Canon’s HV20 as the most accomplished sub-£1,000 camcorder for the more serious videomaker. But the compactness of the HDC-SD5 makes it a very tempting proposition if sheer portability is a major concern. Image quality may not be as good as HDV, and it lacks a few important features for the enthusiast. However, it still shoots great video and is very comfortable to use – plus the increasingly low price of SD cards mean they could end up being the winner of the current camcorder format wars.