The Panasonic HDC-SD9 was the biggest-selling HD camcorder of 2008. It combined decent video quality with one of the keenest prices for a Full HD model around, making high definition affordable at last. But all good things must come to an end, and the SD9 is now hard to get hold of, as it’s two generations behind the current range. We’ve already seen Panasonic’s latest high-end model, the HDC-HS300, and its more price-conscious hard disk-based sibling, the HDC-HS20. But the closest thing to a successor to the SD9 is the HDC-SD20. 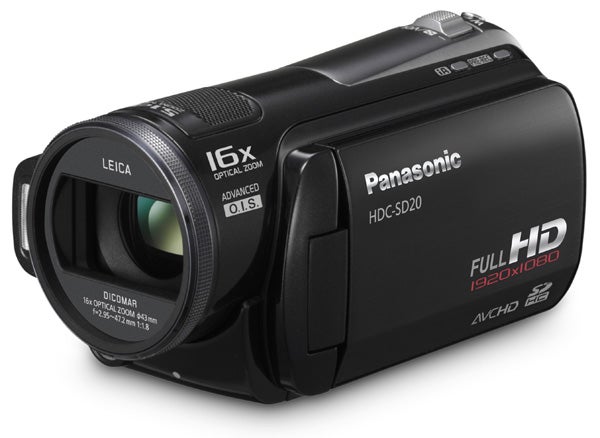 Like its predecessor, the SD20 is a pure flash-based model, with no memory or hard disk built in. So its dimensions and overall design are very similar to its predecessor. However, where the SD9 packed in three 1/6in CCD sensors, the SD20 has just a single 1/6in CMOS sensor instead. The resolution of this single sensor has been nearly tripled to compensate, with a gross 1.47-megapixels.


However, the light-receiving area will be one third as much as the SD9’s, and only 1.17-megapixels are used when shooting video. So the SD20 will be using interpolation to produce its Full HD recording resolution. The only advantage of the small single sensor, apart from the tiny form factor of the SD20, is that it allows the optical zoom to be a very healthy 16x. Otherwise, it is likely to have image quality implications, particularly in low light. 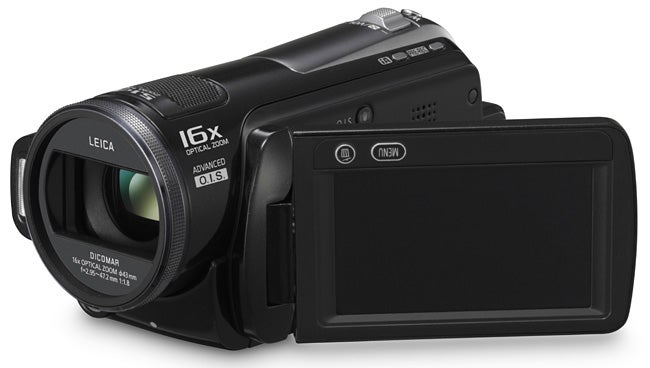 Since there is no memory built in, recording time will depend on the size of SDHC card you use. The SD20 is compatible with Class 4 or faster cards, so 16GB will set you back under £30. Video data rates are available up to 17Mbits/sec, as Panasonic hasn’t switched over to the High Profile Level 4.1 AVCHD standard for its consumer models yet. At this top quality setting, a 16GB card will be enough for two hours of footage, and you can fit six hours on if you drop down to the lowest option, which shoots at 1,440 x 1,080 with a 6Mbits/sec data rate.


This aspect of the SD20 is no different from the SD9, but the control system has changed considerably. Panasonic has extended the touchscreen we first saw in the HS300 down to the SD20 as well, so the LCD sports just two physical buttons for calling up the menu and deleting clips when in playback mode. There are a few discrete buttons on the camera body beneath the LCD for enabling the built-in video light and manual mode, as well as disabling the optical image stabilisation system. Two further buttons on top toggle the Intelligent Auto and Pre-REC functions.

Panasonic’s Intelligent Auto (iA) function senses the conditions and sets the camcorder mode accordingly. So it toggles Intelligent Contrast in bright conditions, and will enable a selection of scene modes such as Low Light and Portrait. In the latter mode, face detection is also enabled, so exposure is set automatically to optimise human subjects. The Pre-REC mode buffers video continually. When you press Record this is tacked onto the beginning, in case you were a bit slow to react. 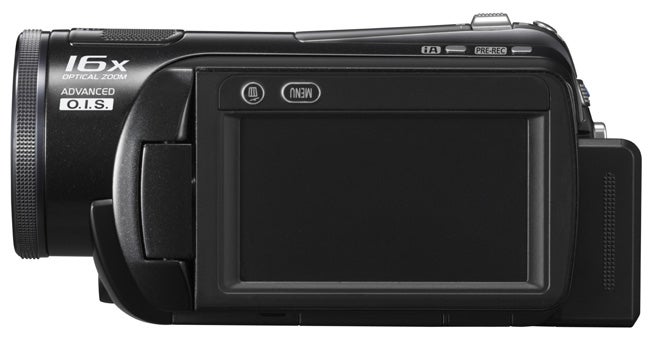 Everything else is operated with the touchscreen. In particular, this provides a one-touch AFAE mode, where you tap on the screen to indicate which part of the frame you want to be used as reference for focus and exposure. In auto mode, you also get onscreen buttons for backlight compensation, digital fade, and tele macro mode. Switching to manual mode adds more, including soft skin mode, colour night view, but most importantly the manual white balance, shutter, iris and focus options.


There are four white balance presets – sunny and cloudy outdoor settings, plus two different artificial light modes. Then there’s fully manual white balance. The shutter can be varied from 1/50th to 1/8000th, and the iris from F16 to F1.8. As usual, up to 18dB of video gain can be added on top of a fully open shutter. These are all usable if a little slow to operate via the touchscreen, but the manual focus is painful, despite the assist function which magnifies the centre of the frame to aid the process.

Heading for the menu provides the usual array of scene modes, although these can’t be used alongside AFAE or iA. Similarly the Digital Cinema colour mode, which records with x.v.Color, cancels these options. Most users will use AFAE mode instead, or leave the camcorder entirely on auto and let iA do the rest. The HDC-SD20 is primarily meant to do its best in auto mode. As such it has no lens ring like the HDC-HS300 or HDC-SD100. It also lacks minijacks for an external microphone or headphones. However, you can still set audio levels manually. Continuing the consumer orientation, Panasonic is spicing things up by offering the SD20 in three different colours – the black we have here, plus silver and red.

Unfortunately, the small sensor does take its toll on image quality. This isn’t so obvious in good lighting, where the lack of resolution doesn’t show itself unless you look closely. The image is less sharp than the competition, such as Canon’s LEGRIA HF20 and a little darker. But this softness hides grain, so most consumers will be satisfied. 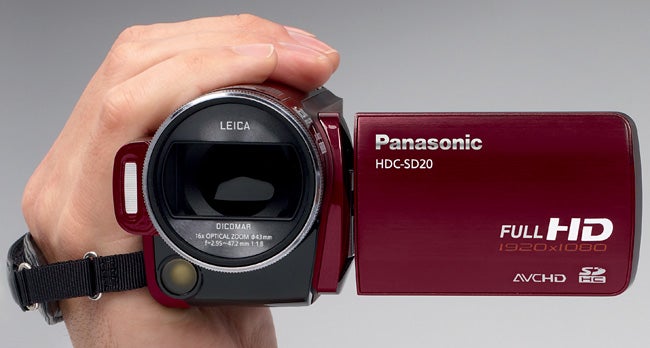 It’s a different story in low light. Here the softness and darkness of the image are accentuated, making video look muddy and lacking in colour. We noticed the same problem with the HDC-HS20, which has an identical sensor and optics. The built-in LED video light can improve things a little at short range, and iA will switch to Low Light mode automatically, but neither can save the image quality from mediocrity.


We weren’t tremendously impressed with the HDC-SD20’s sister product, the HDC-HS20. When we reviewed this product in February, the HDC-SD9 was still readily available for under £400, offering better image quality for a lot less money. Now it’s much harder to find. If you can track it down for less than the HDC-SD20, we still recommend that you opt for the older model. But camcorder prices have risen due to the weakness of the pound, and in the current context the SD20 looks better value, even if it isn’t as good a budget HD camcorder as its direct predecessor.