The Panasonic HC-X1000 is
Panasonic’s first 4K offering in the prosumer camcorder market. With
built-in ND filters, a 20x optical zoom and a host of very impressive 4K
frame rates and codecs, the HX-1000 is well priced at £2,559, more than
£1,000 less than the Sony AX1. 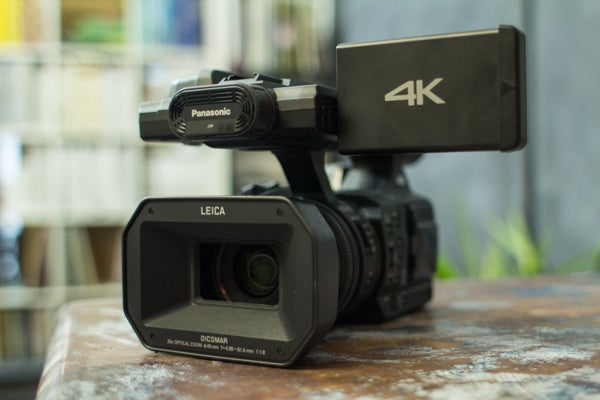 The
first question you have to ask is who is this for? There is no doubt
that 60fps at UHD is a headline grabbing statistic that many
videographers would drool over. With, MP4, AVCHD and MOV codecs this
camera certainly is versatile, but it also has some clear limitations
that you need to understand before deciding whether to buy it.

Due no doubt to the somewhat small sensor, we found the HC-X1000 is hard pushed to get past nine
stops of dynamic range and despite the MP4 codec taking up to 200Mbps,
the image has little to no room for manipulation in post production.

This
confirms to us that the HC-X1000 was never intended to be used by
indie filmmakers, a fact Panasonic made clear in pitching the camera to
us. It feels the HC-X1000 is best suited to commercial contexts, such as
shooting weddings and events. So the real question is whether you
should switch to 4K for this kind of work and whether this is the camera
for the job. 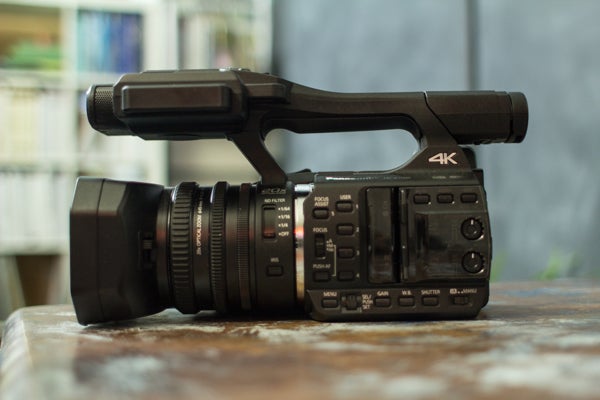 It’s certainly doesn’t lack in features for the
task. As an ENG style camera the HC-X1000 comes with all the standard
buttons and switches you would expect from this traditional camera form.
White balance has an A and B preset, set to 3200k and 5600k, for
tungsten and daylight, allowing for quick switching in fast changing
environments. An auto and custom mode are also available.

The
lens is by far and away the outstanding feature. The 20x optical zoom is
more than enough for any typical videography scenario and the autofocus
is also usable — at no point did it rack to somewhere undesirable or
ruin a shot, though with little depth of field perhaps this is understandable.

The
image stabilisation is a 5-Axis hybrid system, using both software and
optical stabilisation and the results are fantastic. We managed to use
the telephoto end of the lens handheld with remarkably little shake.
Image stabilisation may sound concerning for purists, but for anyone who
is often off the tripod it will be an essential feature. 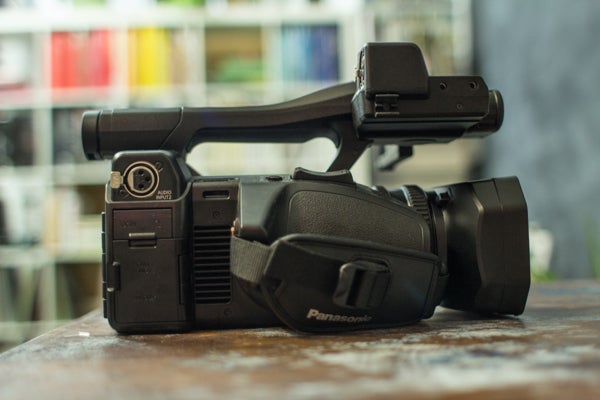 The
camera ships with two 64GB SD cards, which saves a nice amount of money
on purchase (around £150/£200). The notion of never missing a shot is
something Panasonic is keen on pushing with the two SD card slots and
the continuous recording mode, which allows for one card to be
constantly recording while the other shoots what you tell it to with the
REC button.

Another option is to shoot one after the other,
meaning that you never have to leave the camera and can capture action
continuously. This isn’t a ground-breaking feature, but on a camera at
the cheaper end of the market it’s a beneficial feature and will suit
those shooting sports and events coverage.

Histograms, zebras,
focus peaking and focus expand are all great features that make this
camera very usable on a day-to-day basis. Everything is easily
accessible in the buttons and menu system and follows a formula that has
been set out in traditional digital video camera for years. Again, not ground-breaking, but essential when it comes to being able to trust what you are looking at on a daily basis.

The
battery life is a very respectable six hours when shooting continuously
in 4K. This is essential when shooting a full day of interviews and
reduces the risk of having to change battery mid interview, or missing a
shot because of something as fundamental as battery. One spare battery
would be sufficient for a day of intense shooting and that is refreshing
to see. The 64GB SD cards that are provided will take 5 hours and 20
minutes of continuous 4K recording at 200Mbps and if you are shooting
back-to-back on the cards that means over 10 hours of record time.

The
built-in stereo microphone is sufficient and has a reasonable amount of
detail, enough for room microphone, safety or scratch track. 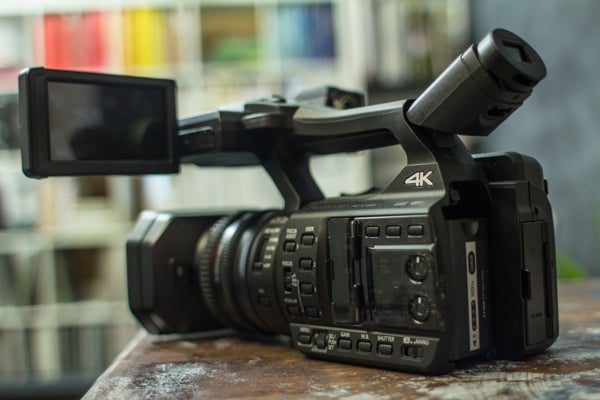 One
major feature that will put off the ‘pro’ end of the market is the
camera doesn’t seem to have a fully manual exposure mode – despite
turning all physical controls to manual, the camera still adjusted
exposure automatically. This means either an almost completely flawed
camera for anyone serious about creating video, or an overly complicated
menu system that has buried an essential feature.

The camera
also has a built in ‘beep’ that sounds upon every button press in the
menu system and would be highly inappropriate for a wedding or
conference event. Yet again such an obvious flaw must be fixable in the
menu system, but after searching every submenu available, accompanied by
never ending beeps, we couldn’t find the setting to turn it off. It’s
hard to believe it’s not there somewhere, but if it is then it’s
needlessly hard to find. 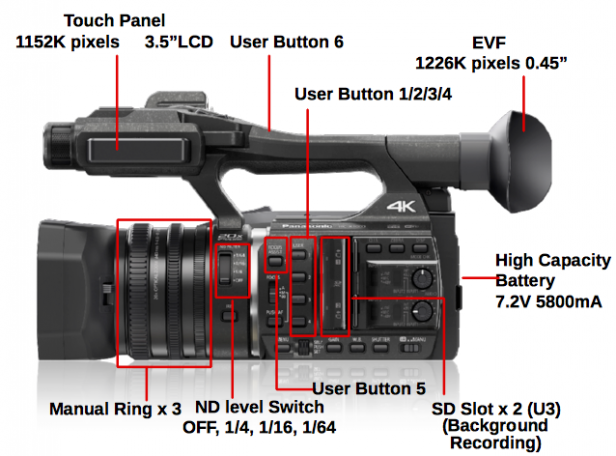 When holding the Panasonic it feels
small, compact and neat — it weighs just 1.5kg. This helps make it very
portable, more so than the Sony AX1, but the trade-off is disappointing
build quality. The plastics feel very cheap and the buttons don’t have a
reassuring, quality feel.

The worst example of the so-so build
quality is the plastic door on the audio controls, which feels flimsy
and would catch easily when dropped into a bag. Of course, we expect
build quality to suffer at the cheaper end of the market, but saving
£1,000 with initial purchase may be a false economy when the plastic
doors snap off leaving parts exposed. 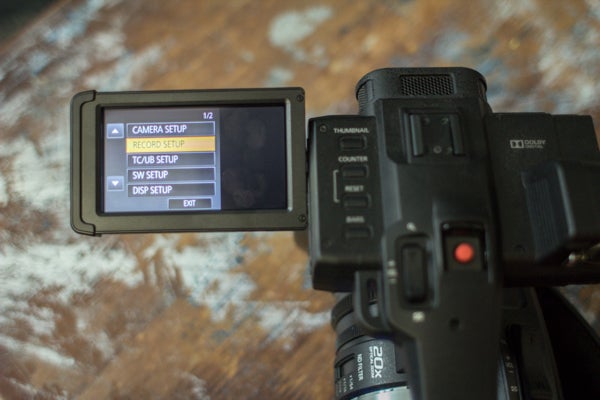 The touchscreen LCD is
functional and bright enough for shooting outdoors. Reflections still
cause problems on very sunny days and the touch screen isn’t as
responsive as it could be, but it is enough to get by.

Personally,
I find the addition of touchscreen to a video camera not ideal as
operating in gloves is a common occurrence, however on a camera of this
size using even the physical buttons can be a struggle. The viewfinder
is clear and is a nice feature that sets this camera apart from a
consumer grade camcorder.

So
far we’ve seen the X1000 has some obvious pros and cons, but the image
quality swings things against it somewhat. While 4K images are superbly
detailed as you would expect, this comes at the expense of too much
noise. Generally, the image is far too noisy and muddy to be
taken seriously — anything that isn’t shot in full daylight has a dull
quality that is surprising for what we expect to see with a 4K camera.

When
people think of 4K images they want sharpness and it feels as if
Panasonic has fallen into the same pitfalls as it did with the GH4. A
tendency to over sharpen causes unnecessary noise in the image and in
lower light this reduces clarity.

From our non-scientific tests,
the dynamic range comes in at a very ‘video’ nine stops. The blacks are
very muddy and don’t have any information when it comes to pushing them
in post-production. The same goes for highlights; they roll off very
fast and have a cheap quality that is expected from a more consumer
grade camera.

Overall, the image quality is potentially a major pitfall for
this camera depending on the kind of work you do. Although it is
sufficient for basic videography, at a time that a Blackmagic Pocket
Cinema Camera, with 12 stops of dynamic range and 12-bit colour depth,
can be purchased for £650, this camera is way behind prosumer needs. 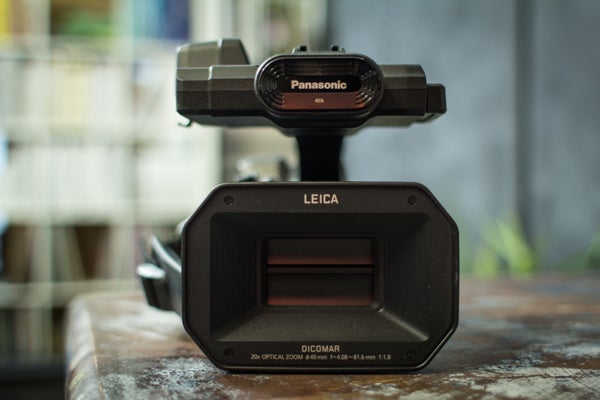 Taking
your 4K footage into post-production also presents problems. The option
of 4K in post-production makes sense as the ability to crop images
without loss of pixels can help if you are stuck in the edit. But, put
simply, a sufficient editing system will cost as much as the camera
itself.

You’ll find managing the 4K files in an existing system
very difficult. From ingestion to edit, after effects linking and
export, we found everything was over twice as slow when compared to
editing 1080p footage. Unless you’re prepared to invest in new editing
equipment you’ll probably end up spending more time shooting in 1080p
than 4K, which rather defeats the point of the HC-X1000. 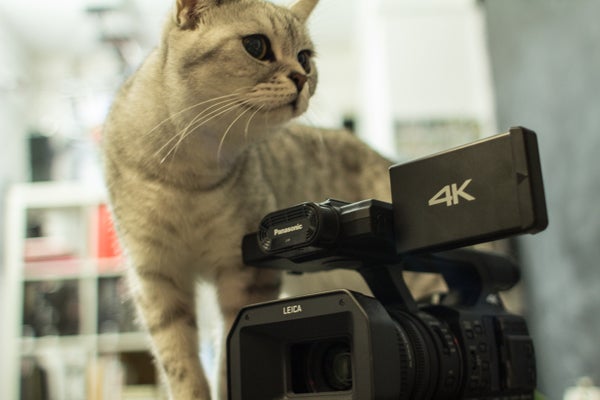 While
the ambition to drive down the price 4K video shooting is admirable,
it’s hard to recommend the Panasonic HC-X1000 right now. Panasonic is
pitching this camera as a prosumer camcorder, but it’s really hard to
see why it is worth spending the money for the ability to shoot at 60fps
in 4K when it is coupled with very average image quality.

There’s no doubting this is a feature-packed camcorder. The lens, battery life and dual SD card slots are all excellent and it ticks many tempting boxes for videographers, but when push comes to shove it isn’t the camera we’d choose if you’re thinking of switching to 4K.

There are some promising elements in the X1000, but images really suffer in low light situations. It really needs a larger sensor to make the most of its other qualities.