Let’s start with recording. As mentioned there’s a 1TB hard disk on board that holds 259 hours of highest-quality high-definition material, but that can be increased to 684 hours if you convert it into the lower bitrate HM mode (we’ll discuss recording modes in Operation). As for standard-def, you can record up to 518 hours’ worth of programmes.

The built-in disc drive can record onto BD-RE, BD-R (single and dual layer), DVD-RAM, DVD-R, DVD-R DL and DVD-RW platters. You can’t record directly onto a disc as everything goes on the hard disk first then has to be copied to disc afterwards. That’s not such a bad thing, though, as it gives you a chance to edit out bits you don’t want and label it all up properly before committing it to disc.

Dual Freeview tuners let you record two channels at once, but unlike rival PVRs from Samsung and Humax you can’t watch a third while two are being recorded, which is a frustrating limitation. It also disables network functionality. However, you can watch a programme from the hard disk while recording two channels, or check out the EPG. 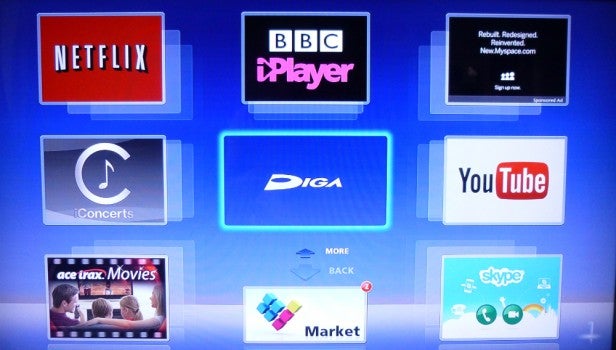 There’s also a pleasing range of network features on board, including the Viera Connect internet content portal and DLNA streaming of media files over a network.

Viera Connect offers the same range of apps as its Blu-ray players and systems, including BBC iPlayer, YouTube, Netflix, Skype (which requires an optional camera), MySpace and others in the Viera Market (where you can also buy peripherals like 3D glasses and cameras). 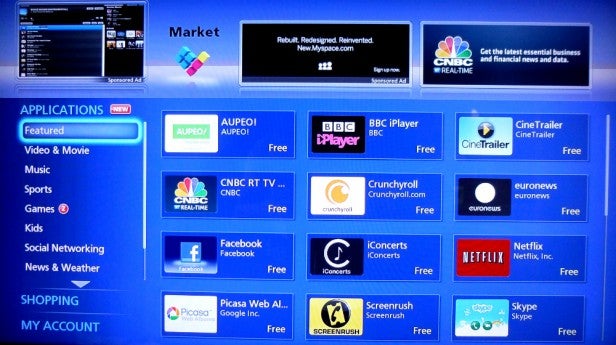 The selection could do with a few more catch-up TV apps like ITV Player, 4OD and Demand Five (all found on Samsung’s latest PVRs) and the long-winded layout needs a rethink, but it’s a welcome feature nonetheless.

As for DLNA, the deck streams AVCHD, WMV, AVI, MP4, XviD and MOV, but sadly not DivX or MKV (the latter can be played via the USB port, though). Supported music formats include MP3, WMA, WAV and AAC but not FLAC. Non-DLNA servers can be accessed using the Network Drive function.

Also useful is the ability to copy files from SD cards or USB devices onto the hard disk, turning the DMR-BWT735 into a sort of entertainment jukebox. Transferable file types include MPEG-2 (SD video) AVCHD, JPEG and MPO (plus MP3 from USB). You can also transfer certain files to Blu-ray and DVD, making it a versatile tool for managing your media.

Also on the networking front we find the new Remote Recording feature, which allows you to schedule recordings while you’re out and about using your Android or iOS tablet or smartphone (running Panasonic’s DIGA Player app).

This is joined by multiroom streaming, which lets you send a recording or live TV channel from the deck to a networked device anywhere in the home – including Android/iOS smartphones, tablets, DLNA-equipped TVs, Blu-ray players and systems. 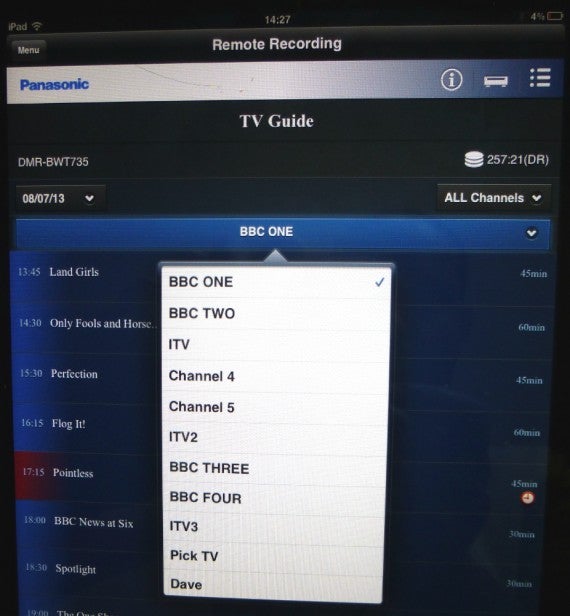 There’s plenty more to report, not least on the Blu-ray playback side. It’s a 3D-capable deck with all of Panasonic’s usual picture trickery, including Adaptive Chroma Processing, 2D-to-3D conversion (for any video source) and 1080p up-scaling, plus it decodes Dolby True HD and DTS HD Master Audio. You’ll also find a bunch of sound and picture enhancements within the Options menu.