The success of Freesat has been eclipsed somewhat by the introduction of Freeview HD, but that doesn’t alter the fact that there are some cracking Freesat products on the market for those who prefer to (or are forced to) receive their TV signals via satellite. Panasonic is still the only company making Freesat recorders with built-in hard disk, Blu-ray and DVD recording, and the DMR-BS880 is the latest addition to this unique product niche.


The DMR-BS880 is not to be confused with the DMR-BW880, which is the same but comes with Freeview HD tuners (we’ve reviewed the less capacious DMR-BW780). It’s an update of 2009’s much-lauded DMR-BS850, and this new version comes with a similar set of talents to its predecessor but with some added features to spice things up a bit.

The basic functionality is the same as the BS850. The built-in hard disk is a mammoth 500GB, which should be enough to hold plenty of space-hungry HD recordings (up to 76 hours of them in best quality, to be precise), while the twin Freesat tuners on board enable you to simultaneously watch one channel and record another, or record two channels at once if you so desire. You can record HD or SD programmes onto the hard disk and then burn them onto Blu-ray or DVD to give to friends or keep for prosperity. When doing so, you can use a range of recording modes to efficiently squeeze recordings into a given disc space or compress hard-disk recordings to make more room.


The unit’s design is virtually identical to Panasonic’s latest Blu-ray players, with a swanky black finish, a bright, legible display panel and a silver stripe running along the bottom of the fascia. It’s a great look; a lot more glamorous than Panasonic’s regular combi recorders. The right hand side drops down to reveal a busy array of sockets and buttons, including a USB port, SD card slot, DV input, composite video input and analogue stereo input, while the disc tray lurks behind a flap on the left.

Loads more inputs and outputs are found on the rear, including an HDMI output for piping hi-def and upscaled SD pictures to your TV, an Ethernet port, coaxial and optical digital audio outputs, composite video output and analogue stereo output. Panasonic has dropped the increasingly outdated component video outputs found on the BS850, but keeps the two RGB-enabled SCART outputs – one input for feeding signals from external devices and one output.


The USB port and SD card slot on the front play a key role in the deck’s multimedia functionality. Connect a USB storage device and you can play MP3, DivX, JPEG, MPEG-2 (SD-Video) and AVCHD files, or transfer any of them (except DivX) onto the hard-disk. Alternatively, you can bypass the HDD and transfer AVCHD or JPEGs directly onto blank Blu-rays, or transfer SD-Video and JPEG onto DVD-RAM. From SD, SDHC and SDXC, you can play JPEG, AVCHD and MPEG-2 SD Video or transfer them to the hard disk.


As for TV recordings, everything you record from Freesat is captured in its original quality on the hard disk using the ‘DR’ recording mode. It takes the digital bitstream so there’s no degradation in picture quality. There is, however, the small matter of copy protection to deal with when burning HD programmes onto Blu-ray, and once again you’ll find a system of flags in place whereby broadcasters can limit the amount of times you can copy certain high-definition recordings. These flags are clearly indicated in the Direct Navigator menu.

Like all of Panasonic’s recorders, transferring recordings onto disc is a blissfully simple process thanks to Panasonic’s foolproof onscreen menus, and when copying hi-def you can use the deck’s built-in H.264 encoder to compress recordings but retain the HD resolution. There are five modes for this purpose – HG, HX, HE, HL and HM – which apply increasing amounts of compression to the recording. For example, using the HG mode you can fit four hours of recordings onto a 25GB Blu-ray, while HM lets you squeeze over 17 hours into the same space.


For DVD recording or for making recordings from external sources, there are four more recording modes – XP (best quality), SP, LP and EP (lowest quality). It’s also good to see that the DMR-BS880 supports any single- or dual-layer recordable Blu-ray or DVD disc.

Freesat functionality is excellent. The EPG is astonishingly crisp and easy to follow, laying its seven-programme grid over a black background with legible text inside each programme block. It alerts you when programmes on SD channels are also available in HD. The landscape view can be changed to portrait if you wish, and there’s loads of options at the bottom of the screen for searching through the guide, including a filter by genre or channel type. It’s great to see that there are no adverts as found on Panasonic’s Freeview recorders, which means the whole screen is devoted to the programme guide, although it’s a shame you can’t continue watching live TV as you browse.


With this comes Series Link, activated on a separate screen after you’ve selected a programme from the EPG (followed by yet another screen that confirms all the details). Helpful onscreen dialogue boxes talk you through any recording clashes and other key details. It’s also pleasing that the Freesat information banner allows you to see what’s on other channels without actually changing over, as well as allowing you to browse the next few programmes, not just ‘now and next’. 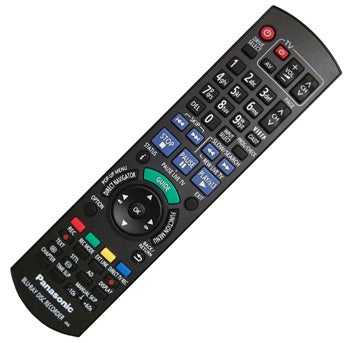 Recordings are stored in the Direct Navigator menu, which thankfully overhauls the DMR-BS850’s tired-looking interface for a fresh design that boasts brighter colours and a clearer layout. In fact, all of the onscreen displays look much better than the BS850’s, including the Functions menu, which uses more sophisticated graphics and icons. In the Direct Navigator menu, recordings are laid out in a list with comprehensive programme information, including the amount of copies that can be made.


Hit the Options button and a list of editing options appears, enabling you to delete part of a recording, change the thumbnail, divide a title and convert DR mode recordings. This deck gives you an immense amount of control over the quality of your recordings and subsequent disc copies, which has always been one of Panasonic’s strengths. You can also pause and rewind live TV like a proper PVR, using a handy timeline to show you where you are in relation to the live broadcast. The deck is also ready for the BBC iPlayer, although we couldn’t access it on our sample.

Alongside all this digital TV functionality you get a top-drawer BD Live Blu-ray player, offering most of the goodies found on Panasonic’s standalone decks (except support for a USB Wi-Fi dongle). These include HD audio decoding, Viera Cast and DLNA networking features that allow you to watch recordings made on this unit on other networked Panasonic players, as well as stream AVCHD and JPEGs from compatible Windows 7 PCs. Sadly we weren’t able to explore this newly-added feature as our review sample kept prompting us to make a software update, telling us it already had it, and then denying access to the network features.


Playing content from USB sticks is a hassle-free process, thanks mainly to the excellent onscreen menus, and the sound quality of files is surprisingly good. There’s a built-in feature for ripping CD tracks to the HDD, and tracks are tagged using the internal Gracenote database.

The remote is excellent, boasting a button layout that makes any function feel intuitive. Even lesser-used features are easy to locate thanks to the clear labelling. It’s just a shame that our review sample was surprisingly sluggish to respond to remote commands. It took much longer to change channels than expected and the onscreen info banner lagged at least a second behind each button press. In fact, various aspects of the deck seemed glitchy, which could be linked to the aforementioned software update problems.


There are no problems with picture performance though. DR mode recordings of HD channels look as punchy, sharp and solid as the live broadcast, but even when you later convert them to any of the H.264 modes, there’s very little reduction in quality. The conversion process is quite lengthy and carried out in real time, but there’s an option to convert files when the deck is in standby. Converting to XP, SP or LP increases artefacts in the picture but the results are still satisfactory, although EP is a little too noisy for comfort.


Standard-definition Freesat channels are also recorded in DR and are similarly faithful to the source broadcast, while recordings from external sources (in this case a Sky+HD box) look superb in XP and SP modes, decent in LP but excessively blurry in EP – use sparingly.


For Blu-ray, the DMR-BS880 calls on Panasonic’s PHL Reference Chroma Processor Plus to process every pixel and improve the accuracy of Blu-ray colour reproduction. The result is remarkably natural, sharp and artefact-free Blu-ray pictures that look fantastic even when blown up on a 65in plasma TV. It’s a dab hand at DVD upscaling too, bumping up the resolution without introducing artefacts like jaggies or mosquito noise. There’s also a range of picture presets, sharpeners and noise reduction modes to fine-tune the images.


Like its esteemed predecessor, the DMR-BS880 commands respect with a jaw-dropping amount of Blu-ray and Freesat features, flawless picture performance and a wonderful-looking operating system. Our experience with it was slightly marred by some problems with networking and software updates, but that may have been peculiar to this sample – in all other respects the BS880 is a magnificent machine. The only things that count against it are price – at over £700 it’s still mega pricey – and Freesat itself, which offers a paltry selection of hi-def channels, even compared with Freeview HD.