Last week we cast a critical eye over the DMP-BD45, a well-meaning if underwhelming attempt to bring Panasonic’s Blu-ray brilliance to the masses. And, as promised, this week we follow it up with a review of its bigger brother, the DMP-BD85, which is currently the best-specified model in the range (until the 3D-capable DMP-BDD300 comes out later this year, that is).


Being the most advanced (and most expensive) player in the line-up, the Profile 2.0 BD85 is equipped with an arsenal of cutting-edge features, most of which are missing from the BD45. Chief among these is Wi-Fi support, which lets you connect to the web or stream content from your home network, making this a strong challenger to wireless decks like the LG BD390 and Sony BDP-S760.

But the main difference between the BD85 and its rivals is the Wi-Fi adapter itself – it isn’t built in. Instead, Panasonic provides a USB dongle in the box, which plugs into a port on the back of the player, or you can use the supplied extension cable if it has trouble finding the wireless waves. Built-in Wi-Fi a la Sony and LG is clearly the more attractive option on paper, particularly as Panasonic’s square-shaped dongle is much bulkier than your average USB stick, but in truth it’s no great hardship – once installed you’ll forget it’s even there. It’s worth pointing out that this USB dongle is supplied with the BD85 but it’s optional for the cheaper BD65.


Like the Sony BDP-S760 and LG BD390, the BD85 supports 802.11a/b/g, as well as the faster n specification. Having a wireless connection makes it a cinch to download or stream BD Live content, but it certainly doesn’t make it any quicker. ”Terminator Salvation’s” BD Live portal took several minutes to access, although the clips stream reasonably quickly and play back smoothly.

The deck is also DLNA certified, which means you can nose around in PCs and NAS servers on your home network and access music and photos stored on them. And using Panasonic’s Viera Cast portal the deck puts even more content at your disposal, including videos from YouTube and photos from Google Picasa.


Having a wireless web connection is pointless if it’s a pain to use, but thankfully it poses few problems here. Go to the setup menu and the Network Easy Setting runs you through each step of the process, giving you the opportunity to use the ‘push button’ WPS function if your router supports it. Alternatively it can perform an access point search followed by the encryption key screen, where you enter your password using a logical and responsive virtual keyboard. It took a few minutes to find our router but once locked on, the BD85 provided a steady and consistent connection.

Turning to the exterior, the BD85 is a bit deeper than the BD45 but in all other respects it’s identical. The black finish and blue light below the disc tray offer a touch of glamour but it’s no great shakes compared with some of the other players out there. Rear video connectivity includes HDMI, component and composite outputs, while for audio you get analogue stereo, coaxial/optical digital audio outputs and gold-plated 5.1-channel analogue outs, which are used in conjunction with the analogue stereo pair to form a 7.1 set.

And on the front, the USB port and SD card slot (which accepts SDHC and SDXC cards) enable you to play your digital media library from USB memory devices. Supported formats via USB include DivX HD, MP3 and JPEG, while AVCHD and JPEG can be played from SD cards. But the card slot’s more valuable function is to provide the 1GB of memory needed for BD Live downloads, as Panasonic hasn’t integrated it into the player itself. All of this hands LG’s BD390 an advantage, given its more generous format support and built-in memory.


What LG’s deck lacks, however, is the proprietary processing developed by Panasonic Hollywood Labs – P4HD and PHL Reference Chroma Processor Plus – which aim to squeeze every last drop of detail from the picture and paint colours with the sort of accuracy that cinephiles strive for. Panasonic calls this ‘Original Cinema Quality’ and draws on the company’s links with the movie industry to deliver the sort of pictures you’d see at your local multiplex – including, of course, the ability to output them at 24 frames per second. 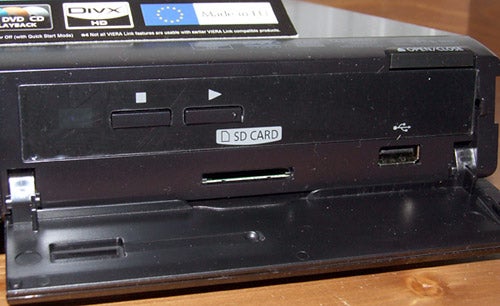 But Panasonic has lavished just as much care and attention on the audio side. The BD85 can decode Dolby TrueHD and DTS HD Master Audio soundtracks and output them from the analogue outputs, and there’s a couple of new audio modes designed to enhance the sound further. HDMI Jitter Purifier aims to deliver a robust digital signal to enhance bass performance, while the Digital Tube Sound Simulator might sound like something from the mind of Chris Morris but actually aims to replicate the warm sounds associated with tube amplifiers.


The operating system uses the same simple layout as the BD45 and previous Panasonic players, with welcoming colours, clearly resolved text and a (mostly) straightforward layout. Although it’s ostensibly user-friendly, certain things start to grate after prolonged use. For instance, to access most of the main functions (USB, Network, Blu-ray etc) you have to hit the Functions button. But annoyingly the Setup menu isn’t listed here – you have to select ‘To Others’ at the bottom, select ‘Setup’ from the subsequent box then wait for the menu to appear after the player handshakes with the receiver and TV again. 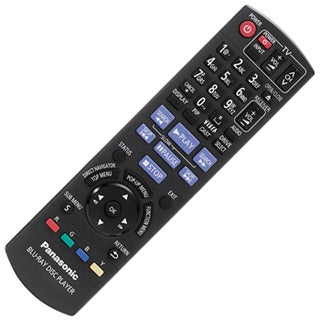 Then there’s the deck’s slow disc loading times, which can be a real nuisance when chopping and changing discs for a review. Like the BD45, ”Terminator Salvation” took one minute 22 seconds to load, with ”Spider-Man 3” taking about 50 seconds.


There are however some very nice touches like the onscreen banner, which offers all the picture presets and manual adjustments found on the BD45 but adds some advanced settings that affect chroma processing. On the audio side, the display lets you select audio enhancement modes like Re-Master, Digital Tube Sound and Dialog Enhancer. Something else not found on the BD45 is the Playback Information Window that summarises all the disc’s vital statistics such as video/audio codecs, bitrates and frame rates.

Onto performance and there’s absolutely nothing to grumble about here. Pictures are simply stunning, boasting abundant detail, utterly natural colours and the sort of depth and solidity that any self-respecting home cinema buff would die for.


The busy desert landscapes of ”Terminator Salvation” are displayed with razor-sharp clarity, and the BD85 picks out the movie’s subtleties with ease, even during shots inside dimly-lit rooms. There are no signs of over-sharpening or noise, no jaggies or judder, just a crisp, cinematic picture from start to finish. Our more objective test with the Silicon Optix HQV disc also reveals some seriously slick processing at play, as all of the tests are reproduced without a hitch. The BD85 also proves its worth with DVDs, delivering sharp and artefact-free upscaled images.

The BD85 is a clear step up from the BD45 in terms of audio clarity and musicality, reproducing CDs with slightly more drive and detail than its cheaper sibling. And you can definitely hear what Panasonic is trying to do with Digital Tube Sound, which does indeed increase the warmth and richness of the signal, but we prefer regular playback and even the Re-Master modes. With decoded movie soundtracks through the analogue outputs, the BD85 produces a dynamic, absorbing soundstage that delivers the detail and vitality we’ve come to expect from the HD audio formats. All in all, a very pleasing performance.


Now this is more like it. After the disappointment of the DMP-BD45 and its lack of BD Live, the DMP-BD85 reminds us why Panasonic is one of the best names in the Blu-ray business. It’s a superb Blu-ray player, packed with all the picture and sound tech that has made the company’s previous players such a success, and it’s great to see features like Wi-Fi, DLNA networking and DivX HD cropping up on the spec sheet.


But as much as we love the BD85, we still think the LG BD390 represents better value. Not only is the Korean deck a good £100 cheaper, but it also comes with built-in memory, wider digital media support, faster disc loading speeds and a better operating system, plus it doesn’t require a USB dongle to pick up Wi-Fi. The BD85’s pictures do offer a touch more depth and sharpness, plus audio performance is superior, but is it £100 better? Probably not.