The hi-def format war is officially over (thank God), so if you’re one of the many people to have cautiously resisted buying an HD player, then now is the time to start thinking about getting your credit card out.


But despite Blu-ray’s landslide victory, which brings much needed clarity to a confused market, the players themselves are still evolving – none of the ‘Profile 1.0′ decks launched so far (apart from the upgradeable PlayStation 3) supports the entire range of features that the format has to offer, which could be a real handicap if you’re an avid film fan who wants to make the most of your movies.

However, the Panasonic DMP-BD30 ushers in a new era, because it’s the first dedicated deck launched in the UK to support discs with Profile 1.1 features, such as dual video/audio decoders that offer picture-in-picture and audio mixing. ‘Big deal!’ we hear you cry, ‘HD DVD had that since day one’. True, but its introduction into the Blu-ray arena brings the format one step closer to completion, leaving only the BD-Live profile to be introduced later this year.


The DMP-BD30 is the follow-up to Panasonic’s superb-but-expensive DMP-BD10, but this time round the price tag is a lot more appetising. As a result it lacks its predecessor’s high-end sophistication and bomb-shelter build quality, but it’s snazzy nonetheless. A couple of black drop-down panels on the fascia hide the disc tray, playback controls and SD card slot (more on that later), giving the unit the kind of sparse, hi-tech look that suits cutting-edge kit like this.

On the back is a fine set of connections. The HDMI v1.3 output allows you to transfer Dolby True HD, Dolby Digital Plus, DTS HD, DTS HD Master Audio and 7.1-channel PCM bitstreams to compatible amplifiers, plus it supports Deep Colour, but you’ll need a TV that supports it and the relevant software, if any ever emerges. This multi-talented socket also shoots out 1080p pictures at 24 frames-per-second, as well as 1080/60p, 1080i, 720p and 576p/480p, and supports HDMI CEC technology, or ‘Viera Link’ in Panasonic-speak. DVDs can also be upscaled to 1080p, giving your SD disc collection a new lease of life.


Elsewhere on the rear panel you’ll find component, S-video and composite video outputs, plus optical and coaxial digital audio outputs (for transferring regular Dolby Digital and DTS bitstreams), a pair of analogue phonos and a set of 5.1-channel analogue outputs. Sadly, the unit doesn’t sport decoders for Dolby True HD, Dolby Digital Plus, DTS HD or DTS HD Master Audio, so you’ll only get decoded Dolby Digital and DTS from these six-channel analogue outputs. All of which means that the only way to hear high-resolution audio formats is via the HDMI output, which isn’t much help if your amp is nearing retirement age.

As for features, let’s tackle the deck’s Profile 1.1 capabilities first. The main advantage is that you can watch picture-in-picture features found on a handful of Blu-ray discs, for instance video commentaries that appear in a sub-screen as the movie plays on the main screen. This also means that there are two audio tracks playing at the same time, which the DMP-BD30 mixes together, but you can turn the secondary audio off if you want. The downside of this secondary audio feature is that when you’re playing any of the hi-res audio formats via HDMI, the unit reverts to Dolby Digital when it is activated.


Some other feature lists would end there, but the DMP-BD30 has plenty more up its sleeve. It’s compatible with a wide range of formats, including AVCHD, MP3, DivX and JPEG, and it’ll play every type of recordable DVD and CD going, plus BD-RE and BD-R discs. What’s more, you can play AVCHD and JPEG files stored on an SD (or SDHC) card by sticking it in the front-mounted slot. Panasonic also reckons this could be used to download bonus content from a movie website onto SD card and playing it in tandem with a Blu-ray disc. 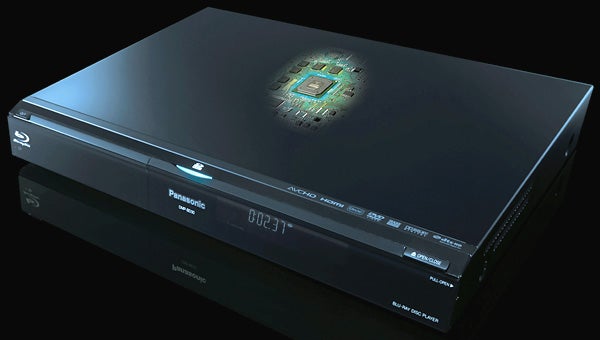 There’s also a vast array of advanced processing technology on board, including the UniPhier; a video processor that combines Pixel Precision Progressive Processing for HD (P4HD) – to boost picture sharpness – with a PHL Reference Chroma Processor that up-samples colour information, while at the same time boosting sound using Audio Re-Master technology (which is said to retrieve sonic data lost during the compression process used in disc authoring). This AV wizardry was developed by Panasonic Hollywood Laboratory (PHL) in collaboration with film industry professionals, which can only mean good things when it comes to picture and sound quality.


Elsewhere, you can set delay and channel levels for the speakers, plus a range of picture presets and adjustments lets you tweak the image in great detail, using the contrast, brightness, sharpness, colour, gamma and noise reduction settings. Virtual Surround and Dialog Enhancer complete a very satisfying selection of features, though DVD-Audio playback would have been the icing on the cake.

The DMP-BD30’s operating system is pure class. It’s very rare to find a menu system that has been designed with this level of simplicity and intuitiveness – the layout of submenus is logical and the deck’s software responds rapidly as you’re cruising through the options – although there is a pause when you press search or first call up the setup menu. Panasonic has also grouped the key features into mini-menus that can be called up during playback, and controlling these with the remote is a complete breeze thanks to its extremely clear button layout and labelling. It also sports dedicated buttons for turning PIP and secondary audio on and off.

Also pleasing is that the start up time is a lot quicker than the other Blu-ray players we’ve tested (apart from the Sharp BD-HP20H in Quick Start mode, but that’s cheating) and it has absolutely no trouble digesting tricky BD-J menus. The only operational blot on the copybook is its inability to resume playback after you’ve pressed stop (perhaps to access the setup menu), which is down to the disc rather than the player but it’s still annoying. Why would studios deny us this basic human right?


Anyway, back to business. In performance terms the DMP-BD30 delivers phenomenal 1080p picture quality, which shows off the Blu-ray format in the best way possible. The ”Spider-Man 3” disc looks fantastic, with vivid colours and some of the sharpest looking detail this side of reality.

We also tried out a copy of ”Resident Evil: Extinction” (purely for reviewing purposes you understand) and although it doesn’t boast the most jaw-dropping picture quality Blu-ray has ever seen, it’s good enough to give us an impression of the Panasonic’s picture prowess – and as one of only a few Profile 1.1 discs out there, we thought we’d give it a shot.


The movie’s barren desert landscapes look highly detailed, with the deck picking out the stones and sand patterns in a sharp and focused manner, giving the image a pleasing three-dimensionality. The aerial shot showing hundreds of zombies in their compound is reproduced with impressive clarity, while close ups of the snarling undead are as grotesque as you’d imagine in hi-def, revealing every last blemish and rotten tooth.

The disc has a picture-in-picture feature called Under The Umbrella, which shows interview clips with the cast and crew, storyboards and other interesting bits of footage as the movie plays. This works smoothly, and it’s a relief to finally see this level of interactivity on a Blu-ray disc, but the wow factor is reduced considerably by the fact that we’ve seen it all before on HD DVD.


That said, we’re sure it’ll be a useful feature for movie buffs, and certainly a lot of fun – granted, Milla Jovovich sharing her thoughts on the sci-fi genre is hardly Orson Welles ruminating on the making of ”Citizen Kane”, but we’re sure it’ll get better when paired with a decent movie.

However, we did experience some problems with the picture-in-picture audio mixing. Occasionally the movie’s main soundtrack drowned out the commentary, particularly during loud scenes. At other times it worked just fine, with the main volume dropping when a PIP clip appeared. We couldn’t work out why it only worked sometimes – Panasonic says the audio mix is determined by the software. Curious.


Otherwise, sound quality is fantastic, with Resident Evil’s fiery Dolby True HD soundtrack delivered with real gusto through the Pioneer LX01 system. Dolby Digital also sounds great using the 5.1-channel analogue outputs, though the lack of decoded True HD output from these sockets is a shame. The BD30 is also adept with music, making CDs sound fresh and vital with plenty of detail on offer, while MP3s sound great and play without a hitch. JPEGs viewed from an SD card look superb, presented in pin-sharp hi-res quality.


With so much more to come from the Blu-ray format, the DMP-BD30 is by no means the last word in hi-def hardware. It won’t support BD-Live and the lack of hi-res audio decoding is disappointing, given the scarcity of suitably equipped receivers. But when compared with the other comparably-priced Profile 1.0 players on the market from the likes of Sharp, Sony and Samsung, the choice is a real no-brainer – give us the DMP-BD30 every time.


But we say this not just because of its Profile 1.1 spec, as there are many more strings to its bow. It’s packed with lots of useful features, boasts a solid operating system and delivers sizzling picture quality – all of which makes this the best Blu-ray deck on the market, not to mention the most future-proof.