Over the past year Panasonic has made serious inroads into the IP camera market by delivering a range of affordable products many with more than a few unusual features. We were impressed with the diminutive BL-C10 as although image quality wasn’t the greatest it still managed to combine remote pan and tilt controls with an infrared thermal sensor and all at a very low price.


The BB-HCM311 is the latest member of this rapidly increasing family and it offers pan and tilt functions teamed up with two-way audio capabilities. There’s much more though as frame rates get a boost to 30fps (the BL-C10 is only 15fps) and light gathering has improved allowing the camera to function down to only 0.2lux. Motion detection also comes into the picture and the icing on the cake is that the camera has an extra slot in the side allowing video to be recorded directly onto SD Memory Cards. 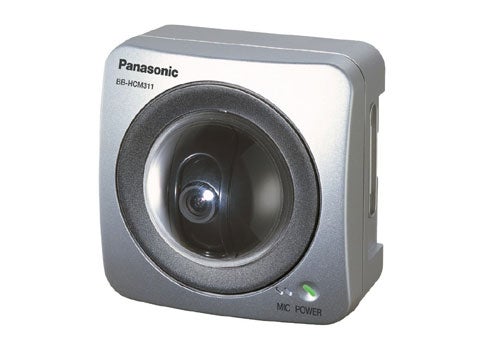 The BB-HCM311 is a well built slab of solid plastic and the SD card slot is covered by a rubber flap which can be screwed in place – this flap also protects the recessed reset button. The camera uses a golf ball style lens mounting with a small slot allowing it to move in either direction. Overall coverage is better that the BL-C10 as the larger ball allows the lens to pan 60 degrees horizontally on either side of its home position while vertical movement extends to 20 degrees upwards and 45 degrees down.


A Fast Ethernet port is provided at the rear along with sockets for an external microphone and speaker although note that the latter will need its own built-in amplifier. The camera also has an internal microphone which we found worked very well, providing that background noise levels aren’t excessive. A delay of around one second for audio transmissions to the web page also means it will be slightly out of synch with the video feed.

Installation won’t take long as the bundled Easy Setup software searches the network and displays the camera ready for initial configuration. Sensibly, the first thing it does is insist that you provide a new username and password to protect access. We like Panasonic’s browser interface as you don’t need to leave the main viewing screen to modify the more basic settings. The controls are laid out neatly down the left side and you can easily switch between the maximum resolution of 640 x 480 pixels and the lower 320 x 240 and choose between quality, motion or standard picture settings. However, the top frame rate is only achievable at the lower resolutions and choosing 640 x 480 will drop this to 12fps. Pointing within the viewing area and clicking will cause the camera lens to zero in on that spot and there’s also a 10x optical zoom which is controlled simply by rotating the mouse wheel. 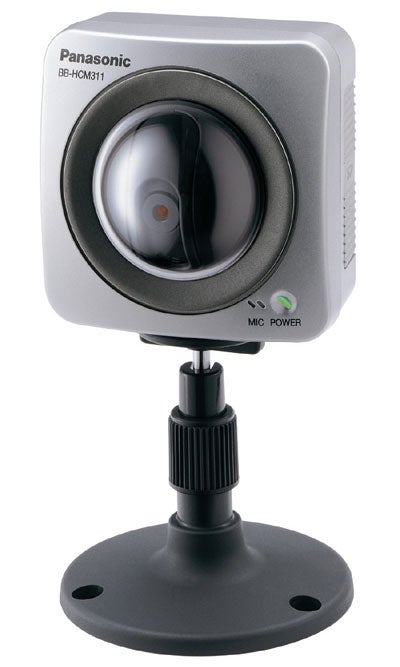 For motion detection you can modify the threshold and sensitivity to suit using the preview screen and bar graph. This is tied in with triggers so that when motion is detected images can be saved in the camera’s buffer, uploaded to an FTP server or emailed to three different addresses. Two other types of trigger are available with one using a simple timer to take still pictures at specific times of selected days. The second links up with the extra terminal block on the rear of the camera that can be connected to two alarms. It also has an output connector which can be linked to, say a security light, and this can be activated directly from the browser interface.

Up to eight preset positions can be configured and used with the triggers to cause the camera to move to a specific position if an alarm is tripped. Access to the camera can be strictly controlled by creating a list of users and three permission levels to decide whether they can simply view the image, use the preset controls or have full control over camera movement.


The SD card support is a really smart feature as this augments the camera’s own buffer memory and increases recording time massively. With a 1GB SD card Panasonic estimates that around 58,000 images at 320 x 240 can be stored on it. The camera even has a dual protocol stack that supports both IPv4 and the next generation IPv6. The latter is due to be phased in soon and will dramatically increase the number of IP addresses available on the Internet. 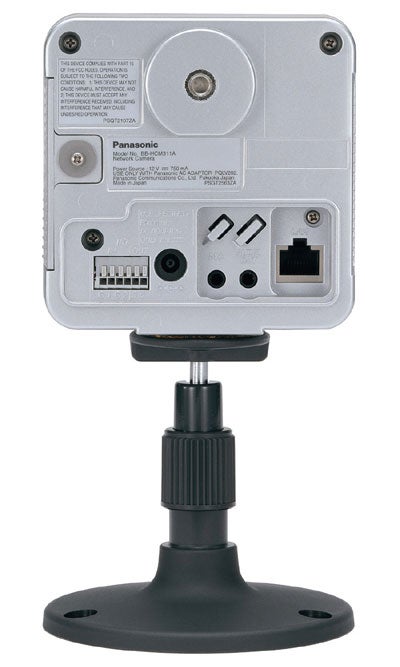 With this many features on offer the biggest casualty is usually image quality but even here Panasonic scores highly. The differences to the BL-C10 are quite remarkable and show clearly the superior lens and CCD sensor. As you can see from the comparison pictures the blue cast has gone completely with far more realistic colour balance, while focus is much sharper allowing more detail to be revealed.


For the price Panasonic is offering an excellent deal as the BB-HCM311 delivers excellent image quality while the higher frame rate makes for much smoother viewing. Full motion detection and two-way audio capabilities combined with a wealth of trigger actions make this the camera to be watched by. 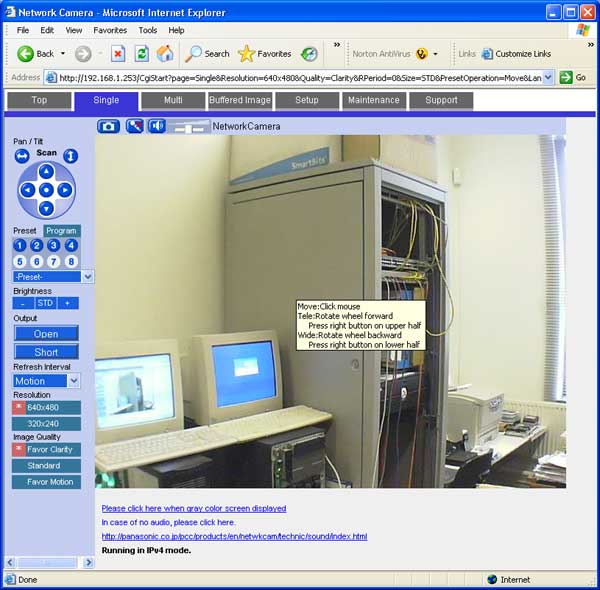 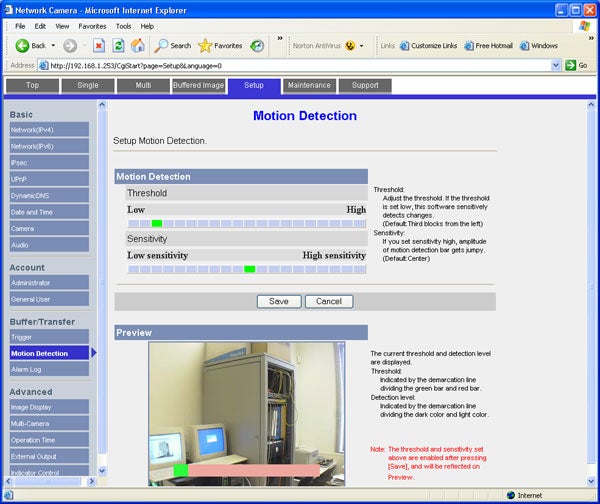 ”’Full motion detection is provided and you can tweak the sensitivity to suit.”’ 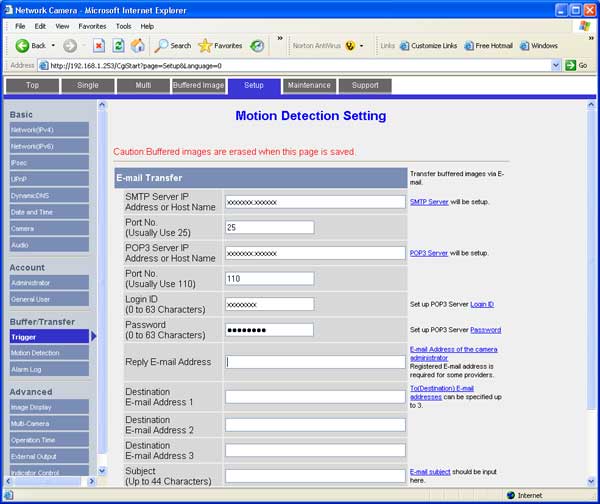 ”’Triggers can be used to send images to an FTP site or emailed to three recipients.”’ 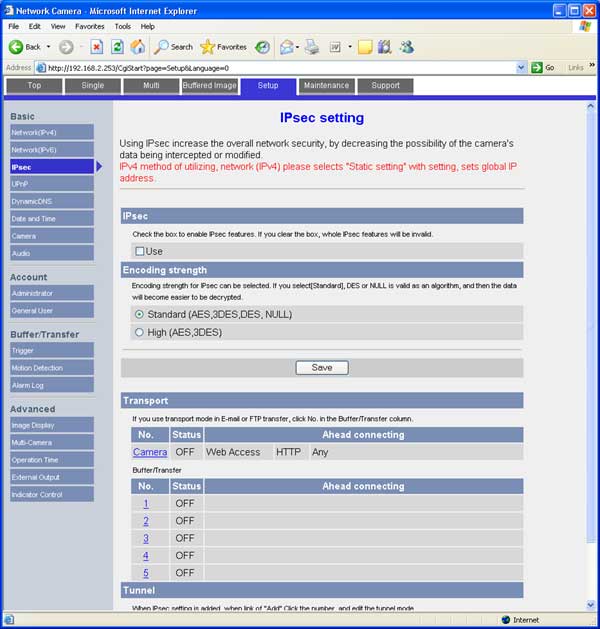 ”’IPSec encrypted transmissions are supported but don’t expect any help from the manual or Panasonic’s support site.”’