Before the EasyNote NJ65 came along, it had been many years since we reviewed a PC from Packard Bell. However, now that it’s been acquired by Acer, the company is going through a bit of a UK revival. Assaulting the budget end of the market is its EasyNote range and today we’re looking at the NJ65’s larger yet slightly cheaper cousin, the 15.6in TJ65, which can be yours for just £450. 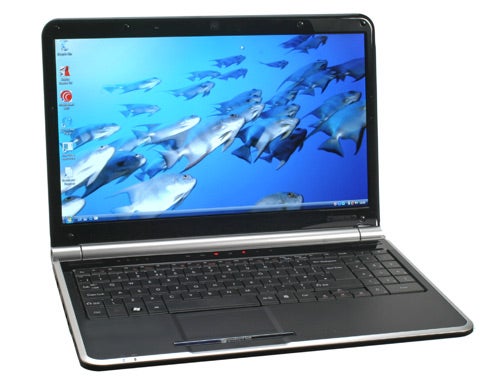 As usual its lid is glossy (the Sony VAIO VGN-NW11S/S being one of the few laptops that isn’t), but depending on the angle the EasyNote’s honeycomb-patterned gold finish is better at hiding fingerprints than most. The chromed Packard Bell logo inset is a nice touch, though the cheap-looking silver hinge doesn’t quite match up.


Opening the TJ65 up reveals an attractive combination of silver with matte and glossy blacks, though again the highly-visible hinge is too blatant. Below the glossy-framed screen is a piano-black area containing red-backlit indicator icons and touch-controls, including ‘buttons’ for Eco Mode, Backup, Wireless and volume, as well as one which disables the touchpad. To be honest this is a puzzling location for it and we far prefer the implementation on Acer Aspire Timeline 5810T and other Timeline machines, where this button is next to the touchpad. 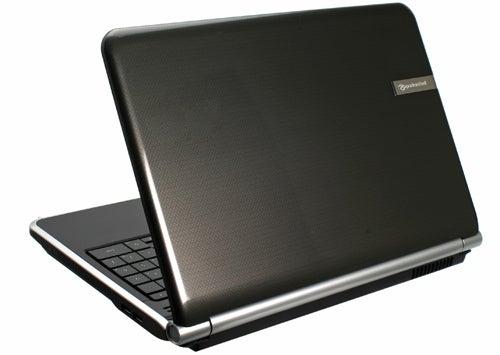 Unlike that found on Packard Bell’s EasyNote NJ65, the keyboard on the TJ65 – which now includes a full number pad – is excellent. Key feedback is still a bit on the light side but this also makes them very quiet and there’s no sign of the flex that plagued its smaller sibling, while layout is flawless and the broad, matte keys feel great.


Thanks to the touchpad’s positioning you’ll rarely need to disable it; we had very few instances where we accidentally moved the cursor with our palm. Its buttons are one of the few unique features about the EasyNote range, as they’re incorporated into a very attractive transparent-and-chrome rocker switch that extends beyond the pad’s edges. Unfortunately, though left-clicking is a pleasure thanks to good feedback and a large responsive zone, right-clicking is too stiff and requires you to extend your thumb too far. 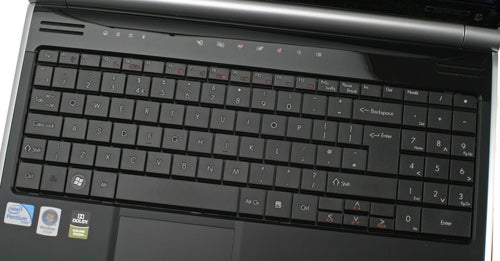 Connectivity is standard fare, with a Gigabit Ethernet port, VGA and HDMI, two USBs, headphone and microphone jacks and a card reader on the left, plus a further two USB ports and the DVD-Rewriter residing on the EasyNote’s right. Actually the optical drive is a potentially major build quality concern here, as its tray cover protrudes slightly from the chassis on one side which could lead to accidents.

It comes as no surprise that this laptop’s speakers are somewhat underwhelming. They reach reasonable volumes and bass is less tinny than many, but treble production is muddy and the soundstage is predictably narrow. For anything more taxing than a light film you’ll still want to use headphones or external speakers, which will benefit from the machine’s included Dolby Sound Room processing. 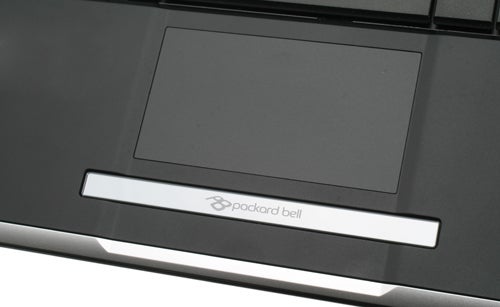 With its glossy coating, the EasyNote TJ65’s 15.6in 1,366 x 768 screen is likewise nothing special. In fact, in resolving details at the extreme ends of the greyscale it’s worse than most, meaning you’ll see less detail in the light and dark parts of films, games and photos. Though viewing angles are average and text reasonably sharp it’s still a disappointing effort, yet having said that, many are unlikely to notice and at this machine’s price it’s not a huge issue.


At the heart of this laptop you’ll find an Intel Pentium dual-core T4200 CPU running at 2.0GHz, which while not up to the performance of its Core 2 Duo brethren should nonetheless be sufficient for most people’s needs. This is backed up by a full 4GB of RAM – as much as the TJ65 can use since it comes with the 32-bit version of Windows Vista Premium. A 250GB, 5,400rpm hard drive is adequate at this price and though there’s no sign of Bluetooth, Wi-Fi is up to the fastest Draft-N standard.

As with most budget laptops using Intel processors, the EasyNote TJ65’s graphics are handled by the underpowered Intel integrated GMA 4500M, which returns a poor 15fps average in TrackMania Nations Forever at medium detail on the screen’s native resolution. However, while this chip might be frugal on performance it’s frugal on the battery too, so we’d expect decent results from the EasyNote TJ65.


Packard Bell has provided a six-cell 4,400mAh battery, which allows this laptop to achieve over three and a half hours in our semi-intensive Productivity test. Turning the screen brightness down to below 40 per cent with Wi-Fi turned off will let you work for well over four hours.

Finally, along with the usual software suspects such as an ad-sponsored edition of Microsoft Works 9.0 and trial versions of Norton Internet Security 2009 and Microsoft Office 2007, you get full versions of Adobe Premiere Elements 4 and Photoshop Elements 6 – a great bonus for amateur photographers and creative types.


In terms of value, Packard Bell makes a good argument with its £449 EasyNote TJ65-AU-010UK, especially adding the Adobe package to the equation – provided it’s something you’re interested in, obviously. Sony’s VAIO VGN-NS30E/S, for example, has come down to £500, but despite a more rugged chassis you’re still getting less memory, no digital video output and paying £50 extra for the privilege. 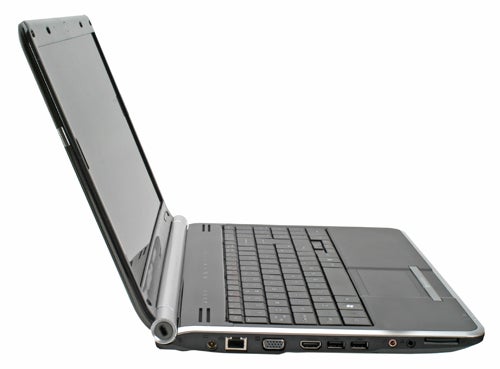 It’s a slightly different story with Samsung’s R522, for though this machine also demands £50 more than the EasyNote, at least you’re getting a larger hard drive and superior connectivity with both eSATA and an ExpressCard slot, not to mention a faster processor. If you’re looking for a proper desktop replacement, meanwhile, the 17.3in Acer Aspire 7735Z-424G32Mn is also worth considering.


Having said all this, shop around and you’ll quickly find 15-16in laptops with comparably-performing specifications (2.0GHz Pentium, 3GB of RAM and a 250GB HDD) for around £400 from good brand names, so there’s no shortage of alternatives.


Packard Bell has put together a fairly good system for an attractive price, but it’s not without its flaws and it doesn’t stand out from the crowd in any particular way.

Here the R522’s Core 2 Duo processor gives it a significant lead over the other machines that use identically-clocked dual core Pentiums.

The EasyNote leads the pack, with Samsung’s R522 falling behind slightly because of its more power-hungry Core 2 Duo CPU.

As the screen is usable at below 40 per cent, you can easily squeeze over four hours of light usage from the TJ65.

Again, considering 100 per cent brightness isn’t required, anything but the lengthiest films won’t pose a challenge.