There are a few ways in which you could characterise Overlord. You could call it a fantasy RPG with a difference. You could get technical and call it a strategy/action RPG hybrid. You could talk influences and describe it as Pikimin meets Dungeon Keeper meets Fable. Perhaps, however, it’s best to just say this: it’s the game that makes you feel good about doing bad. As any British stage actor who hams it up as the bad guy in a Hollywood movie will tell you, it’s the villain that always has the best part. Overlord is a whole game devoted to pantomime villainy. It’s a fantasy game for those of us who preferred Tie Fighter to X-Wing, or who can’t help making the sneering remark in Star Wars: Knights of the Old Republic. Rarely has a game made evil so much fun. 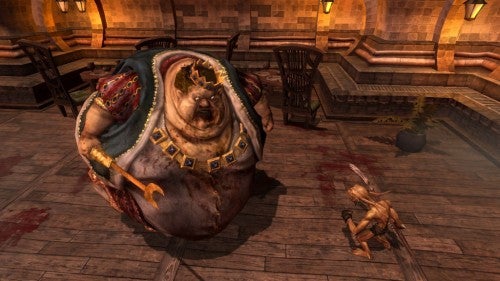 The Pikimin comparisons come from the most distinctive element of the gameplay. As in any action RPG, you have a hero – though here he’s an anti-hero – who explores the wildernesses, towns and dungeons of the fantasy kingdom in search of power and glory. Here your protagonist is a wannabe Sauron, attempting to revive his realm of darkness and put his tower of evil back on the map. Your world is divided into a range of discrete but linked areas, all accessible from your stronghold by a number of unlockable magic portals. Each realm has its own quests available – from crashing a Halfling party to finding a mistress with which to share your home – and completing these will open up new areas or further evil aims in other ways.


Now, as anyone who remembers the opening of Peter Jackson’s Fellowship of the Ring will know, a decent Dark Lord is no slouch with magic powers or melee combat, and your own novice nasty is pretty handy with a fireball and axe. However, no self-respecting overlord does the dirty work himself: that’s what his minions are for. 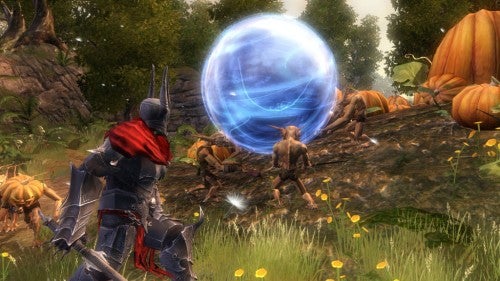 Did you ever play Pikimin? Well, in Miyamoto’s overlooked near-masterpiece, a spaceman wanders an alien planet full of giant insects, growing tiny little plant people – the Pikimin – who act as his troops and workers. Overlord takes a similar approach, though with a slightly more direct control method. Throughout the game your evil overlord is followed by a gang of mischievous, malicious and mindlessly destructive gremlins. While the left stick moves your protagonist, the right controls your merry band of minions. Push it upwards, and they’ll sweep into the screen, wrecking everything and anyone in their wake. Push it left and right, and they’ll creep left and right across the screen to match. Squeeze the left trigger to select a target then squeeze the right, and your hench-things will race off cackling towards their new objective. Press Y, and they’ll stand and guard a waypoint. There’s no pointer, no crosshair and no complex order-stacking systems. Just select a team, point them in the right direction, then watch them go! 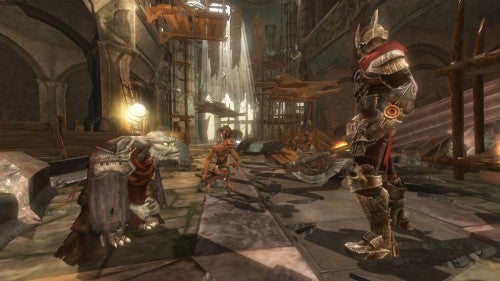 It’s a good, intuitive system, and it works. As in Pikimin, the key to success remains harnessing the brute force and capabilities of your minions in order to overcome the challenges set by the landscape and by the hostile forces that stand in your way.

What makes things interesting is that, also as in Pikimin, your minions are divided into different types, and each needs a different resource – here a different coloured lifeforce obtained by killing creatures – to make new ones. The browns are your basic grunts; hard-wearing, hard-hitting and cheap. The reds are weaker and shorter on the ground, but can dowse fiery barricades and throw fireballs at enemies from a distance. The greens are impervious to poison, and have a fierce back-stabbing attack that can take down larger enemies that would waste the browns and reds in seconds flat. The blues, finally, are the only minions that can survive extended contact with water and have a handy resurrection capability. However, they’re not actually that useful in a fight. 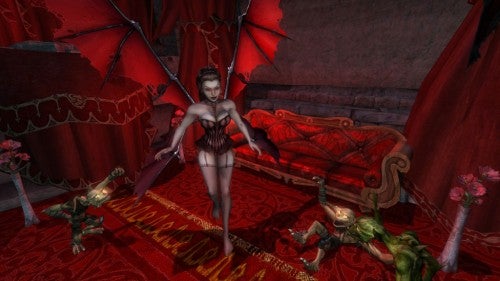 The order of the day, therefore, is knowing which minion to use and where. Some can go in places others can’t; some can go in places even you can’t, and finding ways in which specific groups of minions can navigate through swamp, poison gas or fire and clear paths for the whole gang is the second biggest facet of the game. The first, of course, is combat. In general, simply sending a tide of browns scurrying towards the enemy will do the job. 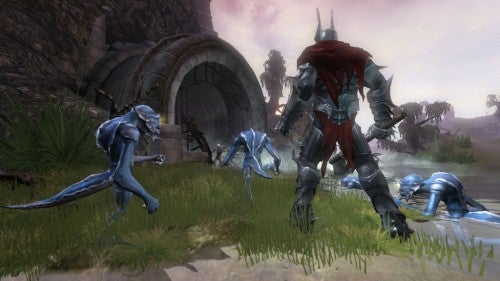 However, there are plenty of times when dividing your forces up and sending a group of reds to higher ground to rain fire down while a gang of browns provides distraction so that a small crack team of greens can then rush in and do their backstabbing thing is the only way to crack a difficult encounter. And if that sentence left you breathless, imagine how difficult organising a gang of spiteful, toddler-tempered monsters to do all that can be? On top of this, you have to know when to wade in yourself and provide support with your own brand of sword and sorcery. At times you’ll tip the battle in the right direction, but you’ll soon find out you’re not invincible. A dead overlord is no good (or bad) to anyone. 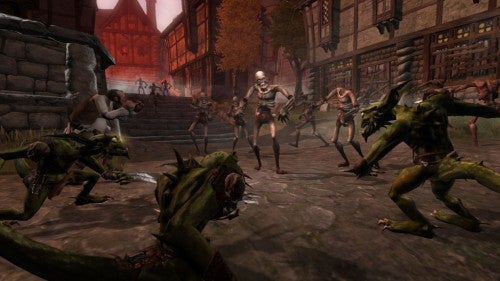 These mechanics worked well for Pikimin, and they work just as well here too. The different areas hit a nice balance between keeping you puzzled and making you frustrated, and the game’s fairly open structure means you’re rarely left banging your head against a brick wall. But what elevates the game from good to great isn’t the gameplay, but the attitude. This is where the Dungeon Keeper comparisons come in. Overlord has the same sort of twisted character as the old Bullfrog favourite, but – thanks to the minions – takes it to a new frenetic level. Watching them steamroller through a village street, smashing crockery and scaring the locals, is a lot of fun. Letting them loose on a crowd of porky, partying hobbits is even more fun. Sending them in to murder more hobbits in their sleep is kind of nasty, but – by golly – it warms the cockles of a jaded heart. These gangly, muttering morons have real personality, and as they scavenge arms and armour from the homes and corpses of your foes, they begin to take on weird but lovable identities of their own. Losing members of your horde is always going to be a necessary part of the game, but when you lose a motley crew covered in pumpkins, antlers and other makeshift armour, it’s hard not to feel a twinge of regret. After all, weren’t these the guys that bought you treasure and potions, happy just to serve their dark master again and again and again?

Like the best bits of Little Britain, Overlord shows how a mean sense of humour can work wonders for some otherwise tired subject matter. The traditional peace-loving, soil-tilling Halflings have become a crowd of obese neo-Nazi thugs who have kidnapped the local humans and set them to work in woodland work-camps. The elves who once ruled the sacred forests have become a gang of moaning spirits who bleat on and on about their doom. Putting these gits out of their misery isn’t a crime – it’s practically a public service! In fact, even when you’ve ransacked the innocent village and swiped its stolen food off to feed your own wretched rabble, you still feel a little like (gulp) a hero in disguise. 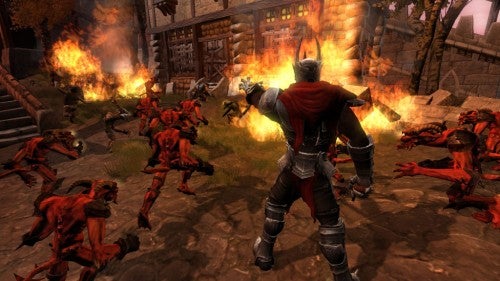 Arguably, this is the game’s biggest fault. At times, Overlord reminds you of Fable in the overall look and feel, but Fable arguably gave you more actual opportunity to do the wrong thing, and more feedback when you took the villainous route. Here you’ll get lambasted by the townsfolk and feted for your evil achievements by the crazed minion jester in your dark throne room, but it all seems a bit superficial. Your objectives are interesting and varied, but are they really that different from those you’d have in a more conventional RPG? And while you can customize your own dark stronghold, the link between it and the game seems superfluous. Bar facilities that can help improve your arms and armour, there’s nothing to really tie your tower to the core gameplay.


To be truthful, the faults don’t stop there. The storyline is paper thin – more driven by a delight in turning fantasy clichés on their head than creating a coherent story – and there’s no tangible character progression to speak of. You get more minions, more spells, better weapons and better armour, but are you really growing as a force for evil in the world? Are you just playing Christian Slater to Sauron’s Jack Nicholson: a youthful imitator who never becomes more than a pale shadow of the real thing? 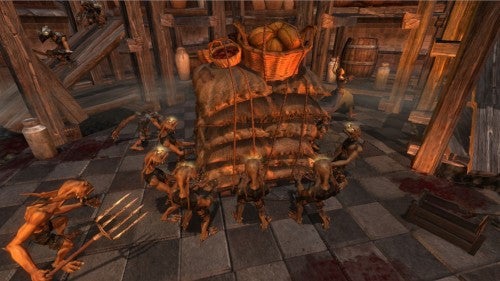 This is a shame, but it’s not a disaster. Overlord might be slight, and it might even be a little repetitive, but if it’s lightweight in a bad way it’s also lightweight in a good way. It’s different, fresh and immediately engaging. It’s even graphically quite accomplished, with the sort of beautiful environments that wowed us when we first saw Kameo: Elements of Power, but none of the sub-Zelda tosh that spoilt that party. What’s more, you can’t help but admire the way Codemasters has fitted some complicated requirements into a slick and intuitive control system that even the most ham-fisted console owner can get to grips with within an hour. Maybe Overlord doesn’t take itself seriously enough, but if the end-result is a game so free of pomposity and pretension, and so rich in sheer, simple stupid pleasures, I don’t care. It’s still given me some of the best, unadulterated fun I’ve had playing games in months.


A joyous mix of childish bad-boy attitude and ‘borrowed’ ideas, fashioned into one of the most stupidly entertaining games this year. Overlord may be slight, but it’s wickedly enjoyable all the same.