As with most people who like to reminisce about the golden age of the adventure game, I get excited every now and then that it might be due for a bit of a renaissance. To be honest, this is a genre that’s still looking for the right way forward. On the one hand, Telltale’s Sam and Max adventures have made it clear that you can achieve some success by tapping the nostalgia vein and giving fans the good old days with a modern visual style. Nothing wrong with that, providing the puzzles are entertaining and the humour works. On the other hand, Revolution’s more recent Broken Sword games and Quantic Dream’s Fahrenheit have tried to stretch the genre in a new, movie-like direction. The latter, in particular, made me really hopeful. Fahrenheit wasn’t perfect – too many quick-time event sequences, too little sense towards the end – but the way it fused multiple, branching storylines, cinematic camera angles and truly interactive dialogue was impressive. You just hoped that other developers could take these ideas and run with them. 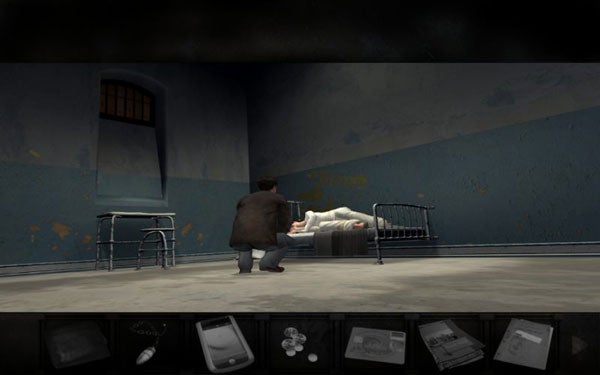 In a way, Overclocked is an attempt to do just that. In fact, one of the reasons I wanted to look at it was that it name-checked Fahrenheit in the press release that accompanied the game. However, it’s not a particularly successful attempt, partly because it’s a much more linear and traditional adventure game than Fahrenheit and partly because – even when you take that into account – it’s not a particularly good one.


Like Fahrenheit, you can see where Overclocked takes its influences from. The plot is reminiscent of a Hollywood psychological thriller. Elements of the style are clearly borrowed from the post-Seven thriller (David Fincher’s film seems to be for the adventure and survival horror game what Aliens has become for the Sci-Fi FPS). General camera work and the heavy use of split-screen come straight from the 24 school of modern TV thriller. And like Fahrenheit, Overclocked works through multiple narratives, with you piecing the story together from several different perspectives. 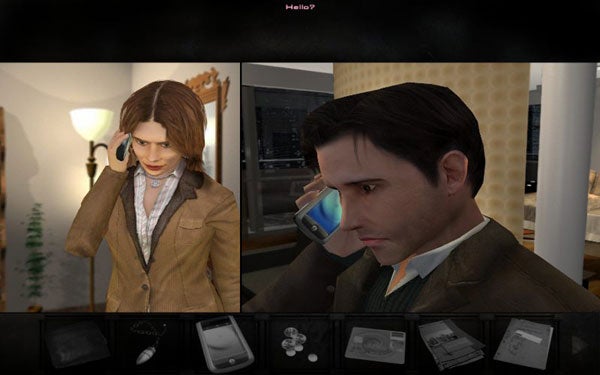 To do so, it uses a classic Hollywood device – the investigating psychologist. Basically, five amnesiac young men and women are found in varying states of acute psychological distress on the streets of New York City and bought to a remote asylum on Staten Island. Distrustful of the asylum’s medical staff, the police call in a forensic psychologist, David McNamara, to find out who these people are and what put them in this condition. By asking the right questions and finding the right prompts, McNamara can piece their memories together, one step backwards at a time.

This ingeniously breaks the game into several layers. On one level, you’re McNamara, and by wandering around the asylum and using the tools at hand you can push the patients into talking to you. You can also get a certain amount of help from the (suspiciously) unhelpful staff and the detective in charge of the case. Having prompted a recollection, you then find yourself in the shoes of that character, effectively retreading the path they took during the period before they lost their memory. Solving puzzles in the flashback sequences then gives McNamara information he needs to prompt another sequence, either with that patient or with another. And so it goes. 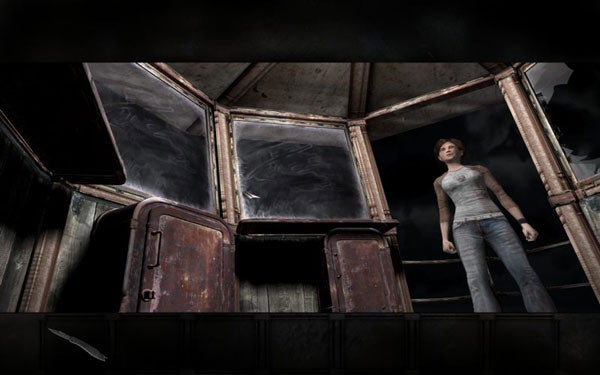 Here’s where things get reasonably clever. McNamara has a PDA, which he uses to record his patient interviews. Having recorded an interview with one patient, he can then play it back to another. This becomes important, because it’s soon apparent that all five patients were together in some kind of abandoned army depot. Only by using one patient’s memories to trigger another’s can McNamara get to grips with what happened there. Meanwhile, our shrink protagonist has his own enigmas for us to deal with. Why does his wife want a divorce? What happened to him in the army? What is the accident that nobody will talk about? What’s really going on at the asylum? 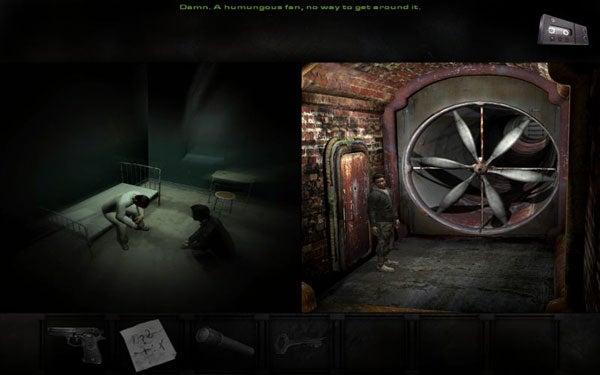 Sounds good? Well, it should be, but the reality is rather different. Sadly, at least some of my negativity towards the finished product comes down to poor production values. I know we shouldn’t judge adventure games by the same visual standards we might judge, say, Bioshock or Gears of War but – golly – Overclocked looks rough. The cut-scenes would have just about looked acceptable four years ago, but not now, the environments are dull and the in-game character models are primitive by today’s benchmarks. Worst of all for a game that relies heavily on close-ups and dialogue to tell its story, the faces are rigid and inexpressive. Combine eyes that don’t move with poor facial modelling and some rather bland voicework, and the scenes rarely have the impact that they should. In fact, certain sequences are more likely to provoke titters than the shocked gasps that they should. Imagine a Hitchcock thriller remade with Thunderbirds puppets and you might get some idea of what I mean.

I might be able to live with this were the gameplay a bit more exciting. Sadly, while the context-sensitive point-and-click interface and gadgets like the PDS work well, the simple fact is that the puzzles are mostly quite pedestrian. In many cases, it’s just a question of working out how to circumvent a fairly simple barrier – we’re definitely not talking Monkey Island here – while in other cases you’ll be scratching your head as to what slightly obscure solution will trigger the next batch of memories. Rarely is there any tension, any chance to improvise or any opportunity to think outside the box. In fact, you come away feeling that Overclocked is all about the story, and that if you want to know how it all fits together, you’re just going to have to follow the game’s set path. 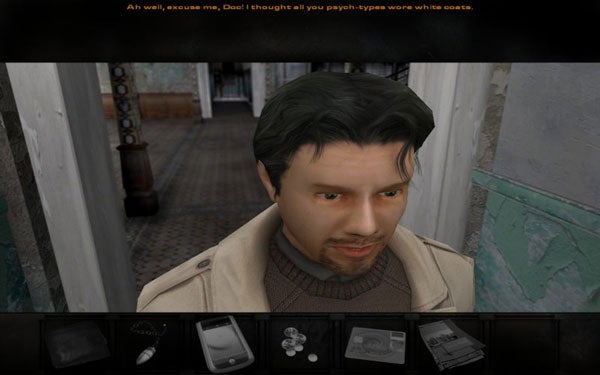 On the positive side, the story is just about interesting enough to keep you engaged. Even though I was put off by the plodding gameplay and the poor presentation, I came back to Overclocked because I wanted to know what happened to our mental cases, and how it will all work out. It’s a strange case of the narrative itch that you just have to scratch, and a few old-school adventure game addicts might find this enough to make the purchase worthwhile. 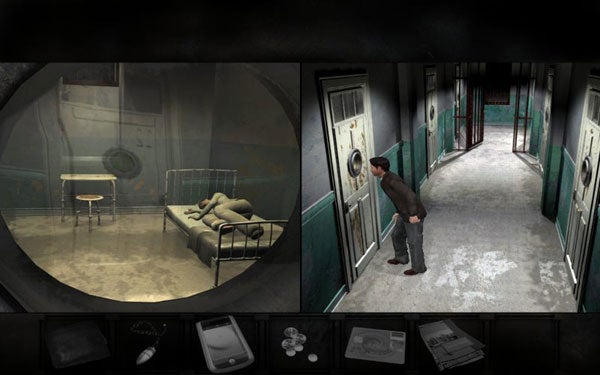 All the same, it’s hard to recommend that anyone else rush out and buy this game. Overclocked seems to have taken elements from Fahrenheit and applied them to a classic point-and-click adventure style, but Fahrenheit worked because it gave you choices and immersed you intellectually and emotionally in its world. Overclocked tries with its conversations between you and your soon-to-be estranged wife, but these scenes are too close to primitive machinima to make that work. Do I feel slightly mean for criticising a game because its budget and technology can’t match its ambitions? Sure, but Overclocked just doesn’t work as it should. Nothing bar the story is strong enough to compete in today’s games market, and the result is another adventure game that has one toe in the future, but the rest firmly stuck in the past.


A disappointing attempt at a point-and-click psychological thriller, let down by below-par presentation and uninspired puzzles. One for adventure addicts only.